These two candidates are shaking up a staid political life. Good. 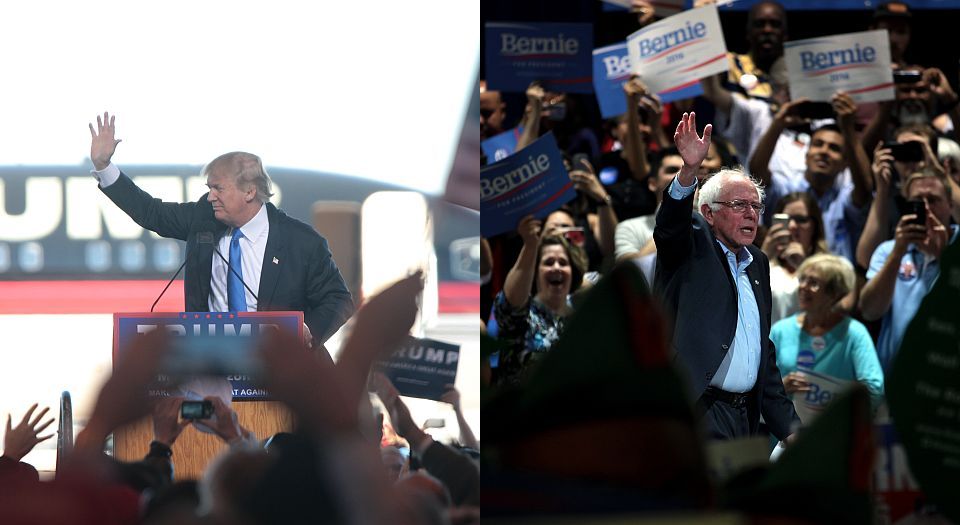 To many, Donald Trump and Bernie Sanders are polar opposites. To Sanders’ supporters, Trump is a reality-TV billionaire, exactly the type Sanders blames for today’s problems. To Trump’s fans, Sanders is a government-loving socialist, and a wimp who hands over his mic to Black Lives Matter protesters. As Trump says of Sanders: ‘He wants to give away our country, folks. We’re not going to let it happen.’

But Trump and Sanders share much in common. Both come from outside the normal political channels; until recently neither was a member of the party they now seek to represent in the presidential election. Both are channelling disaffection from sections of society, often blue-collar, that have lost faith in government, political parties, business, and other institutions. And both Trump and Sanders are mobilising people on the basis of a populist, anti-elite message.

Today’s new populism in the US – like populist individuals and movements of the past – isn’t bound by the traditional political categories of left and right. As the historian Michael Kazin has noted, populism is ‘more an impulse than an ideology’; it is a ‘flexible mode of persuasion’ that can be employed towards a variety of political ends. In the US, populism has ranged from the small, farmer-based People’s Party of the 1890s and the labour movement of the early-20th century, to George Wallace’s segregationist third-party presidential bid in the 1960s and Ronald Reagan’s overtures to workers in the 1980s.

This latest wave of populism in the US, as represented by Trump and Sanders, is filling a vacuum left by the slow disintegration of the Republican and Democratic parties. Both groups have adopted top-down, technocratic policies, and both are widely viewed as dysfunctional. Populism is also fuelled by a backlash against the political and cultural elite’s apparent disdain for lower-class people, whether it’s President Obama’s dig at people who ‘cling to guns or religion’ or Mitt Romney’s dismissal of the ‘47 per cent’ who are ‘takers’.

The new American populism has been more successful than anyone imagined only a few months ago. It is shaking up the old order. What is unusual about today’s populism, from the perspective of US history, is that it is emerging on both the left and right simultaneously. This reveals that populism is now a society-wide phenomenon, and calls into question how meaningful the traditional left-right categories are today. What’s even more striking, considering so-called ‘American exceptionalism’, is that the US version of populism is part of a global trend: Trump has parallels with Nigel Farage of UKIP and Marine Le Pen of Front National; Sanders resembles Jeremy Corbyn of the Labour Party, Syriza in Greece and Podemos in Spain.

The populist tradition has not necessarily supported civil liberties and other aspects of liberalism, and that is also true today. Trump and Sanders share some illiberal features that have often been a negative characteristic of populist individuals and groups.

For example, there has been a tendency for populists to demonise an external ‘Other’ that must be united against and fought, and we see this in both Trump and Sanders. For Trump, that Other is immigrants, as evidenced by his calls to deport 12million people living illegally in the US, to build a wall on the border with Mexico, and to prevent Muslims from entering the US. For Sanders, that Other is Goldman Sachs and Wall Street, who ‘rig’ the game. Sanders’ claim that Wall Street is the root of working people’s pain (while giving a pass to other elites, like the tech and media moguls who support the Democrats) has exposed him to criticism from Hillary Clinton, who has called him a ‘single issue’ candidate. At worst, these calls from Trump and Sanders echo the xenophobia and anti-Semitism of populists of the past.

Populists have also tended to rally around the nation, and seek protection from global influences. In that vein, both Trump and Sanders are against the free movement of goods: both think China is taking advantage of the US in trade, and both oppose the Trans-Pacific Partnership trade agreement that President Obama has proposed. And both Trump and Sanders are opposed to the free movement of people: Trump’s views on immigration are well known, but Sanders is not fully supportive of open immigration either. ‘What right-wing people in this country would love is an open-border policy’, he has said. ‘Bring in all kinds of people, work for $2 or $3 an hour, that would be great for them. I don’t believe in that.’

Populists have also had a patchy history when it comes to defending civil liberties, like free speech. Trump has called for shutting down the internet (somehow) to stem the recruitment of jihadists. He dismissed critics: ‘Somebody will say, “Oh freedom of speech, freedom of speech.” These are foolish people.’ Sanders, for his part, is not a stout defender of free speech. He has called on the Department of Justice to prosecute ExxonMobil for climate-change denial, thus potentially opening up the criminalisation of anyone who questions climate orthodoxy.

However, despite the problematic baggage that Trump and Sanders bring with them, their new-style populism is, in my view, something to be welcomed. Mainstream politics hasn’t served the mass of people well. The elites are out of touch, distant in geographical as well as political terms, as evidenced by the sharper self-segregation of communities along class lines. Today’s populists have interrupted the elite echo chamber, and forced a discussion of the needs of the masses. Now, instead of discussing what should be done to the people, politics is being reoriented around what should be done for the people. And that’s a good thing.

As analysis of primary poll results has shown, both Trump and Sanders have encouraged new groups of people to become engaged in the political process. The fact that folks who previously sat out elections are now voting has made this year’s nomination contests unpredictable.

Furthermore, both insurgent candidates have been successful at changing the focus of debate. They have caused their rivals to respond and take on board aspects of their appeals. Hillary has clearly sought to steal Bernie’s lines (but not convincingly, as she is anything but anti-establishment). And Ted Cruz has tried to steal Trump’s thunder, adopting Trump-like lines such as: ‘I will always stand with the American people against the bipartisan corruption of Washington.’ The rise of Trump within the GOP has also led to conservative thinkers, like those at the National Review, to admit they need new policies that can appeal to working people.

Yet while many view these developments as positive and even exciting, not all do. ‘Populist’ has historically been a pejorative term of abuse, especially when levelled by elitists and technocrats who distrust the masses. In the US tradition, liberal intellectuals of the postwar period, like Richard Hofstadter, who essentially viewed populists as proto-fascists, bear most responsibility for populists having a reputation in the US as bigoted, anti-intellectual and supportive of demagoguery.

It is best to adopt a balanced and clear-eyed view about the rise of the new populism: it is an important and welcome step in the revitalisation of democracy, but, in itself, it is insufficient for ensuring economic and political progress. The new populism is breaking up the old political structures, and providing an opening. It is up to us, the people, to determine where it goes from here.