We must be free to hurt Muslims’ feelings

Why we must stand with Bangladesh’s vilified secularist bloggers. 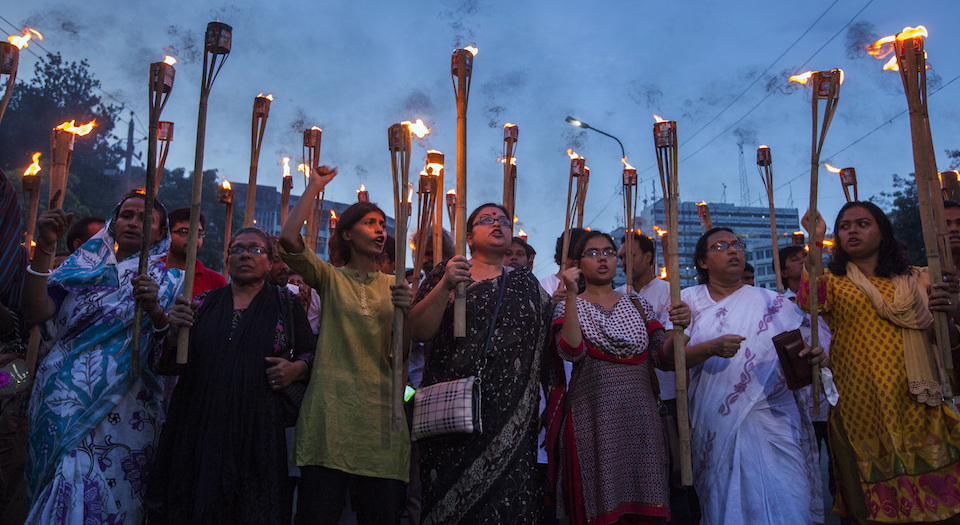 Following the hacking to death of yet another Bangladeshi secularist blogger, a Bangladeshi police chief has come up with an idea for how these gruesome murders might be halted: secularists should stop criticising religion. Yes, according to Shahidul Haque, the problem is not the machetes being wielded by the intolerant Islamists who can handle no questioning of their beliefs; no, it’s the blasphemous words being published on the blogs of secularists, atheists and free thinkers. If only these people would stop expressing their beliefs, or their lack of belief, then they wouldn’t run the risk of being slaughtered. They ‘crossed the line’, said Haque. If they would just stop ‘hurting religious sentiment’, then they’d be okay.

This extraordinary act of victim-blaming — which can be summarised as ‘Shut the hell up if you want to live’ — came in response to the hacking to death of Niloy Neel in Dhaka. He’s the fourth secularist blogger to be killed this year. Ananta Bijoy Das was stabbed to death on his way to work in June, for daring to contribute to a blog devoted to the promotion of ‘science, rationalism, humanism and freethinking’. The founder of that blog, Avijit Roy, was murdered in February. And Washiqur Rahman was killed with meat cleavers in March. All had been on radical Islamists’ death lists. All were killed for the ‘crime’ of disrespecting, or in Haque’s words ‘hurting’, the dominant belief system in Bangladesh: Islam. What is happening there is like a drawn-out version of what happened at Charlie Hebdo in January: the killing of people for having the supposedly wrong worldview.

Yet even though the police chief’s response to Neel’s killing sounds callous and censorious, doesn’t it also sound familiar? If you want to stay safe, don’t cross the line… where have we heard this before? We heard it after the Charlie Hebdo massacre. And again following the shooting at a free-speech event in Copenhgan in February. But then, it wasn’t a foreign police boss who was basically saying ‘Silence yourself if you want to live’ — it was liberals, Europe’s chattering classes, even the literary set, all of whom expressed the idea that murdered critics of Islam are responsible for their deaths long before Haque’s hamfisted response to the murder of Neel.

After the Copenhagen shooting, a Guardian writer said: ‘Free speech as legal and moral pre-requisites in a free society must be defended. But…’ Ah, the inevitable ‘but’ that follows every unconvincing declaration of support for free speech these days. ‘But’, he said, ‘we must guard against the understandable temptation to be provocative in the publication of [anti-Islamic] cartoons if the sole objective is to establish that we can do so. With rights to free speech come responsibilities.’ In short, ‘don’t cross the line’ — exactly what the Bangladeshi police chief said to godless bloggers.

After the Charlie Hebdo massacre, a writer for the New Statesman said we cannot have ‘the right to offend’ with ‘no corresponding responsibility’. ‘[T]here are always going to be lines that… cannot be crossed’, he said. Perhaps it was this slippery apology for the massacre at Charlie Hebdo which inspired the Bangladeshi police chief to say: ‘None should cross the limit.’ Who’d have thought it: a writer for the house magazine of the British left and a head of police in a less-than-liberal state sharing the same view — that when it comes to freedom of expression, there are lines / limits. Don’t want to be shot at your desk? Then don’t mock Muhammad. Don’t want to be hacked to pieces on your way to work? Then don’t be a secularist. Respect the lines, respect the limits.

And of course, in April numerous authors, including Peter Carey, Michael Ondaatje and Joyce Carol Oates, publicly balked at American PEN’s decision to give a freedom of expression award to Charlie Hebdo. Their reasoning for getting all sniffy over celebrating the commitment to free speech of a magazine that lost 10 members of staff for defending free speech — infinitely more than any of them has ever done — was striking. Given that France has a large number of ‘devout Muslims’, many of them with experiences of ‘France’s various colonial enterprises’, Charlie Hebdo’s cartoons ‘must be seen as being intended to cause further humiliation and suffering’. In short, they hurt people’s feelings, and that is bad. Same thing Shahidul Haque is now saying to Bangladesh’s threatened secularist bloggers: ‘Don’t hurt religious sentiment.’

That there can be so much in common between supposed liberals in the West and a police chief in Dhaka is alarming. What they fundamentally agree on is that people’s feelings are more important than freedom of speech. Yeah, yeah, you can have free speech, but… but don’t use it to make any religious people or minority groups feel bad. There is a disturbing unholy marriage between these influential people who are cagey about free speech and the Islamist hotheads who carry out attacks on speakers who offend them. The more that Western liberals or Bangladeshi coppers send the message that it’s really bad to use speech to criticise or ridicule the religious, the more some of the more extreme elements within a religion will think: ‘Yeah, it is. I’m taking action.’ The sanctification of hurt feelings gives extremists a licence to seek vengeance for their own hurt feelings. Mainstream society demonises the hurting of religious feelings; non-mainstream violent individuals act on this demonisation and punish the ‘hurters’. Political and literary cowardice in relation to free speech inflames physical assaults on free speech.

Across the West, people’s feelings are being elevated over freedom. Whether it’s plays being shut down because they might offend Muslims, billboards being withdrawn because they rattled feminists, or adverts on buses being taken down because they might ‘hurt’ gay people’s self-esteem, we now seem to value the protection of feelings more than freedom of speech. No, we don’t use machetes to silence those who hurt us, preferring instead petitions and Twitterstorms. But the difference is one of gravity and bloodiness, not moral intent: in all these cases, from Western Europe to the blood-stained streets of Bangladesh, the arrogant aim is the same — to silence those who ‘hurt’ us. Enough. We cannot abandon the Bangladeshi bloggers, or act as if they brought these attacks on themselves. The freedom of speech of these bloggers, of just one blogger, is infinitely more important than the feelings of a billion Muslims. Just as our freedom of speech is more important than the sensitivities of any community group or political campaign over here. You feel hurt? Tough shit. Grow up. Deal with it. We will carry on saying what we want to say.