The truth about the SNP surge

Sturgeon is the beneficiary of the collapse of traditional politics. 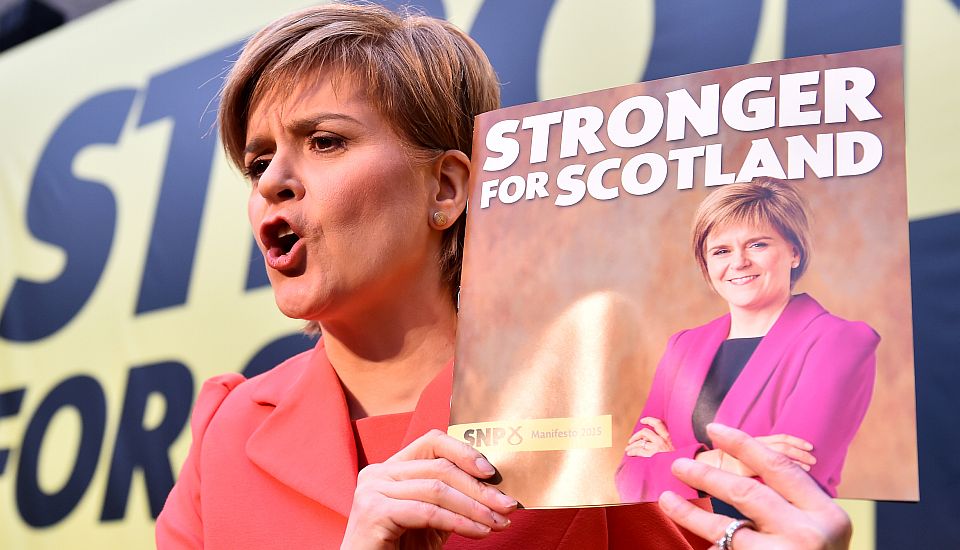 It is the coming man, the irresistible force, the party England’s left-leaning just wish they could vote for. The Scottish National Party (SNP) is surging. That’s right, surging. We know it is because pollsters and pundits tell us it is. Many reckon it will get over 50 per cent of the vote north of the border, which translates into about 55 of Scotland’s 59 seats. And for a party that won just 20 per cent of the Scottish vote, and six seats, at the 2010 General Election, that is quite a turnaround.

The story of the SNP’s surge, its sweeping conquest of a whole swathe of the British Isles, even seems to have been embraced by the party it is likely to supplant as the dominant force in Scotland: Labour. One former Labour MP admitted as much. ‘The polls are right’, he told the Glasgow Herald earlier this month. ‘I hear it on the doorstep; my people hear it. We have thousands of conversations and the polls are bang on. I’ll be looking for another career after May.’ Another Labour MP described the SNP’s rise as ‘like a tsunami’. ‘There’s nothing you can do about it’, he continued. ‘It doesn’t matter if you’re the best swimmer in the world.’

To many observers, especially those disillusioned-of-Labour types longing for something left-wingy, it all makes sense. The SNP’s rise is a product of its own commitment to progressive, leftish politics, writ large in the flinty-mouthed, ostentatious working-classness of the helmet-haired star of the the televised leaders’ debates, SNP leader Nicola Sturgeon. The SNP is everything Labour ought to be, runs the prevailing narrative, filling the ‘progressive vacuum’ left by New Labour’s Blairite betrayal. As their manifesto confirmed this week, SNPers really like the NHS; they don’t like privatisation. They really like protecting the vulnerable; they don’t like austerity. They really like the EU; they don’t like nuclear weapons. That’s why the SNP is on the rise – because it is rolling out socialism in one country (or at least a smallish part of it).

It is a little bit disconcerting to hear the SNP thus described. This, after all, is a party once referred to as the ‘Tartan Tories’, a largely middle-class, poetry-citing fringe movement that has spent much of its 80-odd-year history waxing and waning according to the fortunes of the two main parties: Tories and Labour. It certainly wasn’t especially left-wing. And since it has dominated the Scottish parliament at Holyrood, its politics, far from resounding with Old Labour tunes, have been plucked from New Labour’s miserable songbook. Anti-smoking laws, anti-booze laws, anti-football-chant laws… pick a petty authoritarian move, and you can be sure the SNP have made it. To the sober-minded, the SNP’s politics, built from an assortment of depressingly mainstream political cliches, be it the support for controlled immigration or the distaste for nuclear war, seems utterly conventional. To the deluded, though, it’s political viagra. ‘[We’re] looking at the most radical left-of-centre London government since Clement Attlee was ejected from office in 1951’, wrote one excited scribe of a potential SNP-involved coalition government. Jesus wept.

Too many are looking at the SNP’s rise and are seeing what they want to see. They’re seeing an antidote to so-called neoliberalism. They’re seeing compassionate statism. They’re seeing, in effect, what they want Labour to be. But the problem with that is not just that the SNP is not socialism’s Second Coming. Rather, it’s that the bigger story here, the real reason for the SNP’s ascendancy, lies outside the SNP and in the broader collapse of Britain’s party-political establishment. That’s what has fuelled the SNP’s electoral uptick: the slow, not-so-strange death of first Tory and then Labour Scotland. The SNP is not riding a wave of left-leaning nationalism; it’s just the only party that hasn’t sunk. The Tories-nee-the-Unionists have long since abandoned the good ship Scotland. And now it looks as if Labour is on the brink of sinking without trace, too.

Labour Party politicians and sympathetic pundits blame Labour’s involvement in the pro-Union campaign in last year’s independence referendum. Labour was just too closely associated with the Tories, which, given the Tories’ unpopularity in Scotland, was a grave mistake. That at least is one version of the narrative. But Labour’s problems are far more deeply rooted than a bad tactical alliance. The larger problem was that the alliance served little positive purpose. Neither Labour nor the Tories were able to make a principled, non-fear-invoking case for the Union. Labour’s pointlessness, its lack of anything for the electorate to support, stood exposed. What many in Scotland had long suspected following Labour’s politically bankrupt performance at the 2011 Scottish Parliament elections, when its only policies, such as the abolition of tuition fees, were ripped off from the SNP, was confirmed in 2014. The party was empty.

This is not a new situation. It’s just that for too long, Labour’s internal hollowing-out, its haemorrhaging of political substance and active, signed-up support, was masked by the sheer fact of its electoral success, which itself owed more to the collapse of Scottish Conservativism than the insurgency of Labour. As one observer notes, Labour was content to treat Scotland ‘as a rotten borough’, a place that, according to one Labour MP, you could ‘win every time’. Complacency reigned. ‘There’s a history of low contact rates in Scottish constituencies’, writes one Labour critic, ‘with MPs taking their voters and their local areas for granted. Scottish Labour’s membership has dwindled away to the extent that the SNP can get more members into a paid-for event at the Glasgow Hydro than Labour has in the whole country.’

Disconnected and deracinated, the Labour Party was not the force it appeared. And its stranglehold on Scottish politics was always more fragile than it looked. That the SNP could break it with talk of half-baked independence – still dependent on the EU and subordinate to the Crown – shows that in the kingdom of the idea-less, even Alex Salmond can be king.