Only a mug would vote for the anti-immigrant Labour Party

Why the outrage over a mug? Labour has been bashing migrants for 50 years. 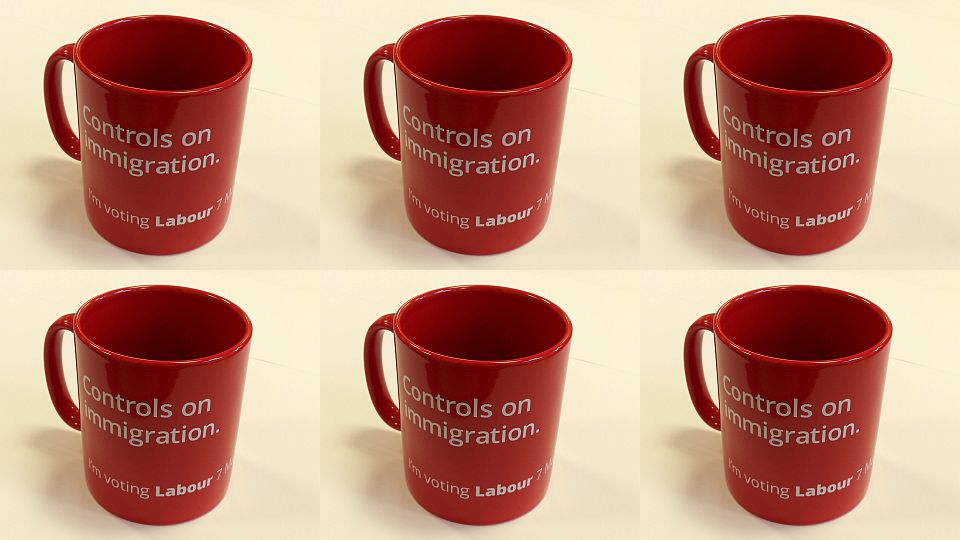 If you want to see how shallow political debate in Britain has become, look no further than mug-gate. Over the weekend, the internet – well, the media-obsessed Twits of the Twitterati, who clearly have nothing better to do of a weekend – went into meltdown over the revelation that Labour is selling mugs that say ‘Controls on immigration… I’m voting Labour’. It’s a pledge mug, and there are five in total – Labour having only five pledges in the run-up to the General Election, because apparently the public can’t handle anything more complex than five snazzy one-liners outlining some eye-wateringly unambitious policies. Labour-supporting media people were mortified by the immigration mug. The left-ish (very ish) press was shocked. The mug was branded ‘unspeakably naff’ and ‘outright racist at worst’. All of which raises a question: where was the outrage when, er, Labour actually unveiled its immigration-control policy, weeks ago?

Labour’s pledge on immigration makes for depressing reading for anyone – like spiked – who believes in freedom of movement and an open-border approach to those who want to travel the world in search of work, a home, a life. It takes a dispiriting bank managers’ approach to the great upheavals of humanity that have motored migration and transformed the world for centuries. Labour says it will make sure immigration is ‘properly controlled and managed’. It has devoted itself to ‘controlling immigration and controlling its impacts on local communities’. And it plans to do this by enforcing ‘stronger border controls’, devoting greater police resources to smashing ‘illegal immigration’, and always distinguishing between good migrants and bad ones – ensuring Britain gets ‘the top talent… while controlling low-skilled migration’. Rough translation? Well-educated Europeans are welcome, but those horny-handed labourers from darker continents can piss off. You thought the mug was racist? Try reading the actual pledge.

But, tellingly, it wasn’t the pledge – which was unveiled in December 2014, more than three months ago – that caused a stir; it was the summarising and printing of it on the side of a mug. Yeah, sure, there were a few ripples of discomfort among Labour-supporting hacks when Ed Miliband outlined his miserabilist, border-fortifying, anti-unskilled policy at the end of last year, most of it along the highly disingenuous lines of: ‘Eurgh, why are we copying UKIP?’ But it was only when the mug appeared and went viral over the past couple of days that Labour-leaning tweeters and commentators went mad. What can we make of the weird fact that there was more fury over the stamping of a policy on a mug than there was over the policy itself? It’s evidence either that Labourites don’t actually read their party’s policy proposals or, more likely I think, they don’t have a massive problem with the immigration pledge itself but would just prefer that it wasn’t advertised so garishly by being put on a mug that they’re expected to buy and soil their designer kitchens with.

Mug-gate is really about saying: ‘Get on with controlling immigration, but do we really have to see and talk about it, especially over tea?’ No decent Labour hack wants his or her daily cuppa ruined by a reminder of their party’s second most important pledge for rejuvenating Britain: tighter immigration control. That these people have, since 14 December, when the policy was unveiled, been singing their party’s praises and agitating for people’s votes suggests they have no problem with the party’s pledges – they would just rather they weren’t plastered so artlessly on mugs that people who are really anti-immigration – the dumb tabloid-reading masses – might start sipping their sugary PG Tips from. What amazing dishonesty on the part of Labour and its influential backers. At least UKIP is upfront about wanting to control immigration more tightly; Labour wants to do that, too, but while desperately trying to sustain the seriously flagging notion that it is somehow a progressive party.

The least convincing response to mug-gate from alarmed Labourites is that which chastises Miliband for chasing the UKIP vote or trying to tap into public prejudices. In short, the problem here is not that Labour is really anti-immigration but merely that it is flirting with those who are, in the hope of scooping up their support. Please. For the past 50 years Labour has been anti-immigration to its core. And very often racist, too. The Labour government’s 1965 White Paper Immigration from the Commonwealth spoke of the need to ‘control the entry of immigrants to our small and overcrowded country’. And when it said ‘immigrants’, it really meant ‘wogs’: Labour’s Commonwealth Immigrants Act 1968 was designed specifically to keep out of Britain the black and brown inhabitants of Commonwealth countries undergoing big or radical changes, such as Kenya. And as the academic Caroline Knowles points out, that Labour government’s racist legislation helped to redefine immigrants as ‘an invasive oppositional community’, somehow at odds with British ‘indigenousness’. Richard Crossman, secretary of state for social services under Harold Wilson in the late 1960s, wrote in his diaries during the discussion of the Commonwealth Act that Labour must not ‘permit… a flood of immigrants to come in and blight the central cities’. As with mug-gate today, old Labourites differed from the likes of Enoch Powell only in that they tried to keep their more explicit immigration fears private while also legislating for them in largely coded ways.

Moving on, the Labour government of 1974 to 1979 not only failed to repeal the Tories’ stringent Immigration Act of 1971, as it had hinted it would do, but actually proposed more immigration controls. It also published a Green Paper in 1977 suggesting a new restrictive definition of British citizenship to distinguish between natural British citizens (Us) and Overseas British Citizens (Them, in the Commonwealth), who had no automatic right to come here. The New Labour government of 1997 to 2010 is seen, especially by the right, as being ‘open borders’ because it cynically let in large numbers of mainly EU immigrants in the hope that they would boost its electoral base. But New Labour, too, was a strict policer of immigration. It kept out vast numbers of non-European migrants, of course, and even within the EU it discriminated: in 2006 it imposed a moratorium on the movement of low-skilled Romanians and Bulgarians to Britain, instantly turning vast swathes of poor Eastern Europe into second-class citizens of Europe who did not enjoy the same rights of movement as the rest of us. Yet when Nigel Farage proposed something similar recently, Labour journos went ballistic, spluttering into their cappuccinos (served in non-racist mugs, of course).

UKIP didn’t exist back in the 1960s, 70s or 80s, when, whether in power or opposition, Labour was honing its petty, ugly worldview on immigration. Labour was keeping blacks out and scaremongering about the threat posed by foreigners to British stability back when Farage was in shorts and probably attacking his teachers with a pea-shooter. And now, Miliband’s miserabilist anti-immigration policy, his racially tinged distinction between talented immigrants who can come here and unskilled ones who must be controlled, is building on his party’s longstanding, well-established hostility to freedom of movement. Labour-backing observers can balk at that mug all they like, but the fact is that on 7 May they will vote for a party which for 50-plus years has been demonising migrants and making their lives harder. You want to ease restrictions on immigration and support freedom of movement? Then don’t vote Labour, you mugs.