What we can learn from a century-old fight for free thought. 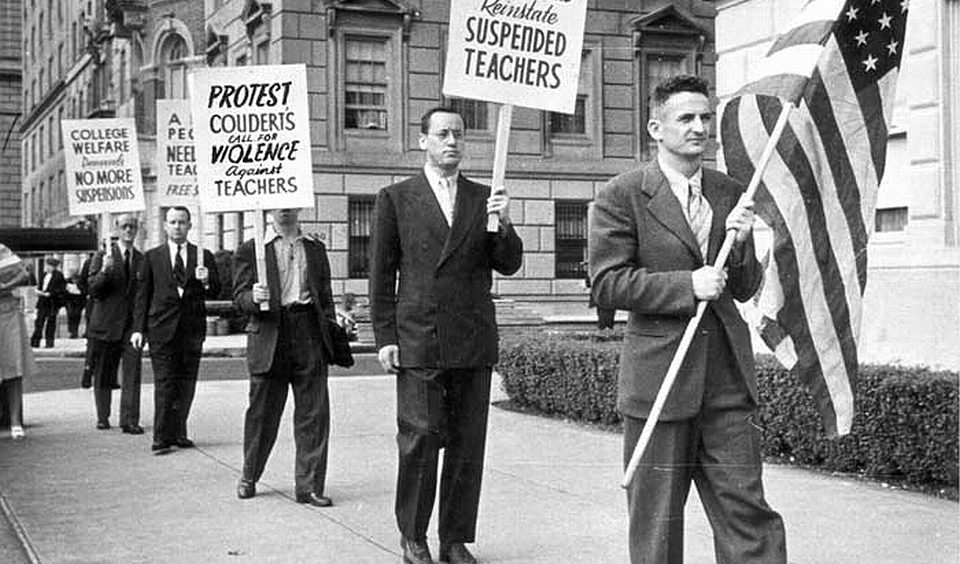 American academic Steven Salaita hit the headlines in the summer. He had accepted a position as professor of American Indian studies at the University of Illinois and resigned his existing post, only to find his job offer had been rescinded. Reports claimed Salaita’s appointment was overruled by institutional managers once they became aware of his proclivity for sending anti-Semitic tweets. A recently published internal investigation criticised ‘the use of civility as a standard in making hiring decisions’. Salaita’s case is still under review and the university is attempting to reach a financial settlement with him.

In the UK, Thomas Docherty, a professor of English and comparative literature, and a renowned critic of government higher-education policy, was suspended from his post at Warwick University for nine months over allegations of insubordination towards his head of department. He stood accused of sarcasm and inappropriate sighing in job interviews. Docherty has since been reinstated and, although he’s faced with a hefty legal bill, all charges against him have been dropped.

In Australia, Barry Spurr, professor of poetry and poetics at the University of Sydney, was suspended for sending racist and sexist emails. These emails, sent privately to around a dozen senior academics and officials within the university, but considered newsworthy because of Spurr’s appointment as a consultant to the federal government’s national English curriculum review, were then published in the Australian magazine New Matilda. Students subsequently launched a successful campaign to have Spurr removed from the university. The cases of Spurr, Salaita and Docherty have prompted a debate about the meaning and importance of academic freedom in today’s universities.

This discussion needs to continue in 2015, a year that marks the centenary of the first formal declaration of the principles of academic freedom. On 1 January 1915, several academics gathered at the Chemistry Club in New York for the inaugural meeting of the American Association of University Professors (AAUP). Those present elected the philosopher and educationalist John Dewey as its president, and established the Committee on Academic Freedom and Tenure. This led to the publication later that same year of the Declaration of Principles of Academic Freedom. The signatories demanded freedom of inquiry and research; freedom of teaching within the university or college; and freedom of extramural utterance and action. The significance of this declaration can be seen in the fact that, a century later, it continues to act as a benchmark in discussions of academic freedom.

The establishment of the AAUP, and its subsequent focus upon academic freedom, was triggered by several high-profile incidents in which professors had either resigned or been dismissed from their universities for espousing political or religious views that contradicted the stance of their institution’s financial backers. In 1895, Edward Bemis, a professor of economics and history, was dismissed from the University of Chicago after his sympathy with the cause of striking workers was reported in the press. The sociologist Edward Ross was dismissed from Stanford University in 1896, after he criticised the university’s sole benefactor, Jane Leland Stanford, in his teaching. Other Stanford professors resigned in solidarity with Ross; these included the economist Arthur Lovejoy, who would later play a crucial role in forming the AAUP.

The AAUP was not established specifically to defend academic freedom but instead to enhance the status and autonomy of professors by professionalising academics and subject disciplines. Academic freedom was just one element of the demand that authority in the university should lie with scholars rather than administrators. Founding members argued that the principle of tenure and the professional autonomy for scholars to teach, research and manage their own affairs as they saw best were essential for maintaining academic standards.

Then, as now, interest in academic freedom was often a pragmatic response to defending individuals at risk of losing their jobs. The first task of the AAUP’s Committee on Academic Freedom and Tenure was to respond to one particular incident: the dismissal of four professors (and the subsequent resignation of 15 others) at the University of Utah for expressing views which ran counter to those of the institution’s trustees. The report into this investigation led to the Declaration of Principles of Academic Freedom.

Although pragmatically driven, the AAUP declaration has stood the test of time because it stands for far more than just a defence of individuals’ jobs. That broader principles were at stake can be seen in the number of professors who resigned rather than compromise their beliefs. The president of Brown University, E Benjamin Andrews, resigned his post in 1897 rather than meet the demand of the trustees that he ‘exercise forbearance in expressing his views’ in order to secure a sizeable institutional donation from Rockefeller. Andrews claimed he could not comply ‘without surrendering that reasonable liberty of utterance… in the absence of which the most ample endowment for an educational institution would have little worth’.

Central to the AAUP declaration was recognition that working in academia was unlike other forms of employment in private business, and that scholars served a social role in relation to knowledge which lent them a duty to ‘impart the results of their own and of their fellow-specialists’ investigations and reflection, both to students and to the general public’. In order for them to carry out this role, they needed to work ‘without fear or favour’ so that, ‘in the interest of society at large, that what purports to be the conclusions of men trained for, and dedicated to, the quest for truth, shall in fact be the conclusions of such men, and not echoes of the opinions of the lay public, or of the individuals who endow or manage universities’.

The AAUP declaration is of its time; it is steeped in the aspiration to take knowledge out of the hands of amateurs and to professionalise its pursuit within the academy. Nonetheless, its central tenets relate not to the particular conditions and preoccupations of those working in higher education in 1915 but to the less historically specific principles regarding the liberal scientific method and Enlightenment ideas about the nature of knowledge. Former AAUP president Cary Nelson suggests the declaration ‘relies on the scientific method as a model for the ideal exercise of academic freedom. In a broad, multi-disciplinary context, that means rationality, willingness to test hypotheses against evidence, openness to counter claims by peers, and so forth.’ The reason for the AAUP’s longevity is the relationship drawn between academic freedom and the fulfilment of the scholarly ‘calling’, which Dewey described as ‘none other than the discovery and diffusion of truth’.

When academic freedom is evoked today, it is all too often portrayed as a matter solely for individuals, especially those with a fondness for social media. It can appear to be taken for granted until a ‘get out of jail free’ card is needed by academics suddenly apologetic at having ‘misspoken’. In 2015 we need a reminder that the principles of academic freedom, so eloquently defined a century ago, are about the collective goals of scholarship as much as they are about defending the jobs of individuals. Academic freedom is fundamental to the purpose of a university and integral to the pursuit of knowledge.