Adults need to stop dragging kids into their sexual fantasies. 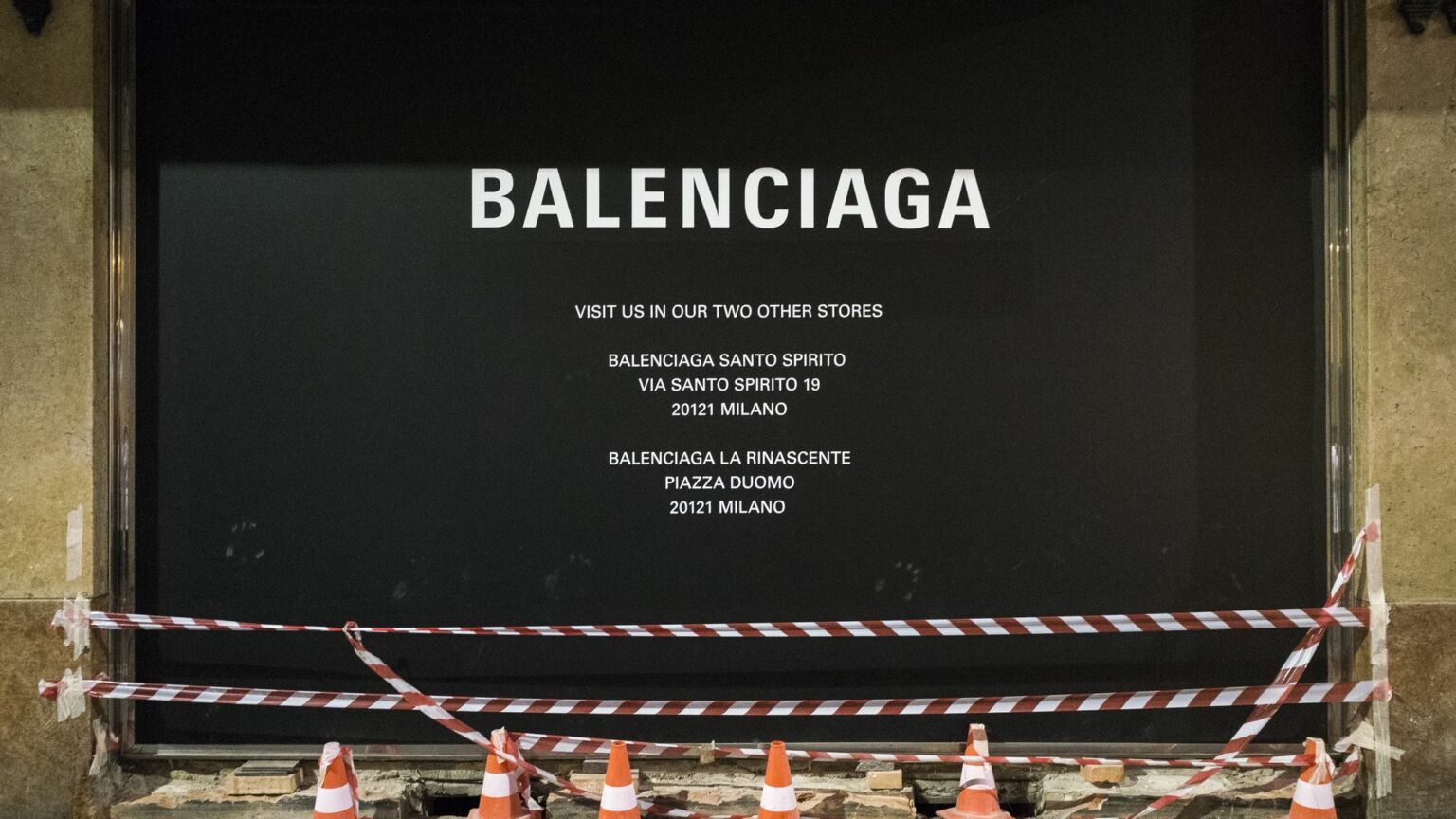 The esteemed, celeb-loved Spanish fashion house Balenciaga has been slammed for putting out images of young kids holding teddy bears wearing kinky bondage gear. The odd pics feature in its Christmas advertising campaign. They show sad-eyed toddlers holding teddies that are dolled up in fishnet tops, lock-and-key collars and wrist restraints. Normally, you’d have to go to some dingy club on a dark street in Soho to see get-up like that. Now, Balenciaga is putting it on fluffy bears and giving those bears to actual children.

This needs an explanation, surely? It cannot be a coincidence that an ad campaign with very young children holding sex teddies also makes a sly reference to a court ruling that said not all sexualised depictions of kids should be illegal. Someone involved in this, whether someone at Balenciaga or someone in the set-designer or photography teams it hired for this campaign, knew what they were doing here.

Balenciaga is blaming the photographer, and is even threatening to sue him. It has apologised for the pics, and for the inclusion of ‘unsettling documents’, and has wiped the campaign from its Instagram. The photographer, meanwhile, insists he had nothing to do with choosing the products or the models. He just set up the lighting and clicked. So no one’s to blame? You know how it is – you take a few photos to promote your products and, darn, you accidentally include children with pervert teds and a nod to a ruling that dismantled part of the child-porn law. Could happen to anyone.

It’s hard to know what’s worse. That someone thought it would be fun to put dejected-looking kids alongside bears that look like they’ve just stumbled out of a queer kink dungeon in West Hollywood or that no one at Balenciaga thought: ‘Is this a little odd?’ Balenciaga is a fashion power-house. It is loved by the Kardashians. It’s all over red carpets. And yet its famous attention to detail appears to have escaped it when it was shown an image of a kid on a couch being gawked at by a fluffy blue bear in an outfit straight out of Cruising.

In another way, though, it makes messed-up sense that no one in this fashion chain of command stopped to wonder if this might all be a bit strange. Because the sad fact is that paedo chic is everywhere right now. In a world saturated with images of kids in adult clothing, and when children bop along to pop and rap tunes that are sexually explicit, and when it is not uncommon to see kids petting men-as-pups at Pride marches or laughing along with drag queens in skimpy outfits, why would anyone bat an eyelid at a pic of a girl on a bed with a kinky bear?

Paedo chic is one of the most worrying trends of our time. We seem to be witnessing a surge in the paedophilic sensibility. No, this is not to say that anyone at Balenciaga is a paedophile, or that a parent is a child abuser if he lets his kid hang out with braless ‘transwomen’ at those bacchanalian orgies of self-regard mixed with self-pity that Pride gatherings have become. But it does feel like the paedophilic imagination, the view of children either as sexual beings or as fit for being exposed to sexual beings, is having a resurgence. And we need to talk about that.

We’ve seen the rise of child drag queens. They ‘saunter’, they ‘slay the runway’, they look ‘fierce’, say mainstream media outlets about these young children who adopt the exaggerated sass of adult drag performers. We’ve seen kids attending not only Drag Queen Story Hour events, which are odd but not the end of the world, but also blatantly sexual drag performances. And who can forget the Family Sex Show – three words that really do not belong together – that was due to take place in Norwich earlier this year? It was about sex, featured full-frontal nudity, and was aimed at kids as young as five. Its website encouraged children to google masturbating animals so that they might see how natural it is to have a wank. Online searches for sexual images of beasts? What could go wrong?

You don’t have to be Mary Whitehouse to find this disturbing. To be worried that pop, always loved by the young, has been pornified, with kids singing along to lyrics like ‘chains and whips excite me’ (thanks, Rihanna) or to the dreaded ‘WAP’. To be worried that so many American schoolteachers seem hellbent on teaching their charges that there are a hundred genders and you can be any one of them you want. To be worried by reports about a male Canadian schoolteacher wearing Size Z fake boobs while teaching teenagers or that some sex-ed books in schools contain info about orgies and sex apps. It’s okay to say this isn’t normal. Even – brace yourselves, moral relativists – that it’s bad.

There seems to have been an erasure of the boundary between adults and children, meaning kids are increasingly dragged – no pun intended – into worlds that were once for grown-ups. The consequences can be sinister. Consider the trans youth charity Mermaids. Not only has it published images featuring young children in sexualised make-up and clothing sitting on beds with drag queens. It also had a trustee who once gave a speech at a conference for ‘minor-attracted persons’ (ie, paedos) and who wrote of a 12-year-old boy dancing, that he was ‘mimic[king] sex acts, repeating the easily citational gestations of pelvic thrusts’. Another of its members of staff, a man, posed as a schoolgirl in explicit photos. Again, this isn’t normal.

Further afield, on the wackier outskirts of identity politics, sympathetic talk of ‘minor-attracted persons’ is becoming more and more widespread. Even USA Today published a report on ‘What the public keeps getting wrong about paedophilia’ – it has since updated the headline to ‘The complicated research behind paedophilia’. What if ‘minor attraction’ is just another sexual identity that people are born with, the paper pondered? It cited experts who believe we should talk about ‘destigmatising paedophilia’.

‘Destigmatising paedophilia’ is both a horrifying idea and one that makes sense in this chaotic era of moral cowardice and non-judgementalism. Don’t kink-shame, we’re constantly told, even when someone’s kink is shameful, like those 50-year-old blokes who go to Pride in baby outfits while sucking on dummies. Don’t question anyone’s gender identity, we’re instructed, even when it’s a palpably mad gender identity – like aerogender, say, which is when your gender changes depending on what room you’re in. Don’t be such prudes, the woke say to parents who are angry that their kids are being plied with nonsense about genderfluidity and given sex-ed classes that border on the pornographic. Judgement is the great sin now. And this abandonment of judgement has opened the door to increasingly crazy demands to ‘Respect my identity!’ where ‘identity’ very often means ‘perversion’. That some actual paedophiles are now demanding their slice of non-judgement, as USA Today reported, is not surprising. Or minor-attracted persons, I should say. We wouldn’t want to kink-shame them.

We need to confront the cult of infantilisation. Today’s infantilisation of adults leads, perversely, to the adultification of children. For if adults are overgrown children, perma-adolescents, reluctant to embrace the moral responsibilities of being a grown-up, then surely there isn’t much difference between them and kids? Bit by bit, the old dividing line between adults and children is washed away, so that adults can seem like kids – staying in the parental home till they’re 30, overemotional, allergic to commitment – and kids can seem like adults. Dress like adults, talk about sex like adults, go to drag shows like adults. The detonation of the border between childhood and adulthood means we all meet on a weird and unsettling new territory in which the grown-ups are babies and the children are saying, wearing and doing things that they shouldn’t be.

This goes far beyond Balenciaga’s bears. We need nothing less than a full restoration of adult authority. Of an understanding that children are children, not like us. Only the return of the adult sensibility can vanquish the paedophilic sensibility that is scarily gaining ground in this young century.

Picture by Andrej, published under a creative-commons licence.