Donald Trump and the blue-tick pricks

Elon Musk’s overturning of woke censorship is a wonderful thing. 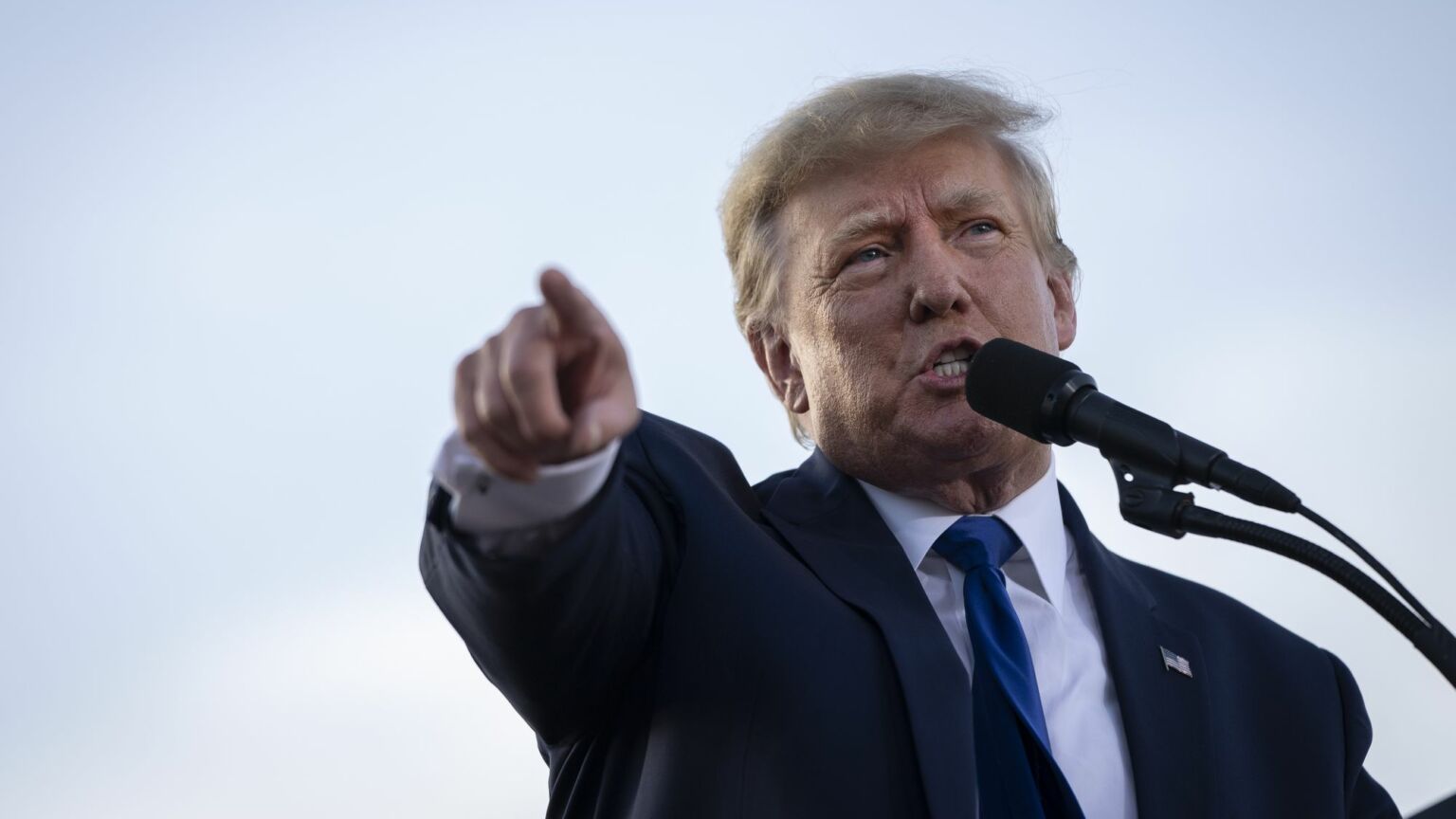 So Elon Musk has done it. He’s brought back Trump. After conducting a Twitter poll on whether Trump should be unbanned – by far the most transparent thing the Twitter company has ever done – Musk and his minions pressed a few buttons and The Donald was back online.

Whether or not he’ll actually tweet again is another matter (he says he won’t). Regardless, Musk’s reinstatement of Trump’s account is a great blow against the tyrannical meddling of the worthy, woke, censorious fainthearts of Silicon Valley who have bizarrely come to exercise such extraordinary power over what may be thought and said in the 21st century.

Sadiq Khan, London’s pint-sized Torquemada, issued a statement saying Trump ‘must not be allowed to use social media’. Mate, who do you think you are? Mayor of the world? ‘Freedom of speech is vital’, said Khan, ‘but’ – there’s always a massive, unsightly but – ‘it must be balanced against keeping other people safe to protect our democracy and society’. Do we really need to remind folk, in 2022, of Benjamin Franklin’s words, about how those who would ditch liberty for safety deserve neither? Khan would have banned Franklin, too. A free-speech extremist? Deplatform.

Against all these unhinged demands to keep Trump banned – forever, one presumes – we should remind people of just how undemocratic and outright imperious Silicon Valley’s banning of Trump was in the first place. It was the most sinister act of social-media censorship to date. And that’s saying something.

It followed last year’s ‘January 6’ riot on Capitol Hill. Twitter’s haughty overlords, never voted for by any American, decreed that Trump’s tweets about not attending Joe Biden’s inauguration and about how his supporters should not be disrespected were sly, secret incitements to violence. On that comedically thin basis they expelled from the modern public square the then sitting president who had been voted for by Americans. Sixty-three million of them.

It was intolerable corporate interference in democracy. The most shocking thing in January 2021 was not Trump’s daft tweets but leftists’ and liberals’ ecstatic cheering as unaccountable billionaires banned a man who had been voted into office by the people. Empowering the capitalist oligarchy to dictate what we’re allowed to say online just to get one over on Bad Orange Man? It’s one of the dumbest things the ostensible left has done in decades.

Yes, Trump’s ceaseless bleating about how the election was stolen was undemocratic. But the censorship of him for saying these things, by a new priestly elite that is beyond the reach of the mere mortals of the electorate, was a far graver erosion of democratic principles. It was an assault on that most fundamental right in a democracy: the right of people to see and hear and judge the ideas of their political leaders.

For reversing this revolt of the virtual elites against the liberties of the masses, Musk should be congratulated. And he hasn’t only brought back Trump. He’s brought back a Trump hater, too: Kathy Griffin, the comedian who was banned for doing an ISIS-style photo shoot in which she held up the bloodied head of evil Trump. If Twitter is now a place where Trump is free to speak and others are free to fantasise about Trump no longer being alive, that’s good, no? Balanced and liberal.

Musk has also reinstated Jordan Peterson, whose speechcrime was to say ‘her breasts’ in reference to the time that actress Elliot Page had, erm, her breasts removed. The Babylon Bee is back, forgiven for its blasphemy of giving its ‘Man of the Year’ award to the trans Biden official, Rachel Levine. Even Kanye is back. ‘Don’t kill what ye hate / Save what ye love’, Musk advised him.

And Meghan Murphy’s back. The Canadian feminist and spiked contributor was banned for saying ‘him’ in relation to Jessica Yaniv, the trans activist who tried to get immigrant beauticians to wax his bollocks and who lodged discrimination complaints against them when they refused to do so. The British Columbia Human Rights Tribunal threw out Yaniv’s complaints and ruled that he had racist motives. He was driven by an urge to ‘punish racialised and immigrant women’, the tribunal said. And yet for calling this nasty man a man, Murphy was permanently suspended, while Yaniv carried on with his dick-swinging tweeting.

Murphy’s case was the perfect example of how morally destitute social-media censorship had become. If you think the outrage is Musk unbanning people like Murphy and not the fact that Murphy was banned for ‘disrespecting’ a prejudiced twat who tried to get poor brown women to touch his testicles, then I cannot help you. If you think the bigot here is the feminist who understands biology and not the man who tried to crush working-class women’s small businesses because they refused to go near his girldick, then your moral compass is sadly beyond repair.

And yet that is exactly what the thoughtpolice of Twitter believed. That is the twisted ideology to which they subscribed. Those are the absurd prejudices they’d imbibed. The 21st-century town square was overseen by zealous moral guardians so corrupted by the credo of wokeness that they believed it was legitimate to punish women for calling men men. How mad is that? The idea that it’s Musk who’s plunging Twitter into chaos is surreal. Twitter was in chaos already – the chaos of a Kafkaesque spiral of evermore egregious acts of censure – and now Musk seems determined to restore some normalcy.

Over the past couple of weeks we’ve seen just how ruthless the blue-tick pricks of Twitter have been. Not only are we reminded that they supported the undemocratic censorship of politicians and the misogynistic censorship of women. We now also know that they were fully aware of how devastating such censorship would be for those on the receiving end.

‘We’re only helping Twitter to enforce its community standards’, said the Twittermob. ‘We’re not censoring anyone, they can always go somewhere else’, they said. They were lying. And we now know they were lying. In the past fortnight the liberal press has been full of articles by blue-tick pricks fretting over how they will cope if Twitter collapses. Twitter was a ‘vital place for connection’, says AOC. Twitter has been a ‘career accelerator’, says one writer. Another says the ‘power of Twitter’ gave her clout because ‘information is a powerful force indeed’. One journalist wrung her hands over Musk’s shortlived proposal to allow people to buy a blue tick on the basis that the old system of ‘verification’ conferred an ‘elite status’ on certain writers, boosting their cultural power. ‘Without Twitter, where else would they turn?’, she asks.

So they knew. The blue-tick people knew that Murphy and other gender-critical feminists would suffer by being banned. They knew the censored would struggle to connect and communicate. They knew that expulsion from Twitter was a grave punishment indeed in the 21st century. They knew they were engaged in the construction of a new moral hierarchy in which those blessed with blue-tick ‘elite status’ would be free to speak while those damned as bigots and expelled from virtual society would struggle to be heard and possibly even to make ends meet. They knew it was a witch-hunt. And you want me to be mad at Elon Musk? Get a grip.