The violence of narcissism is plaguing contemporary society. 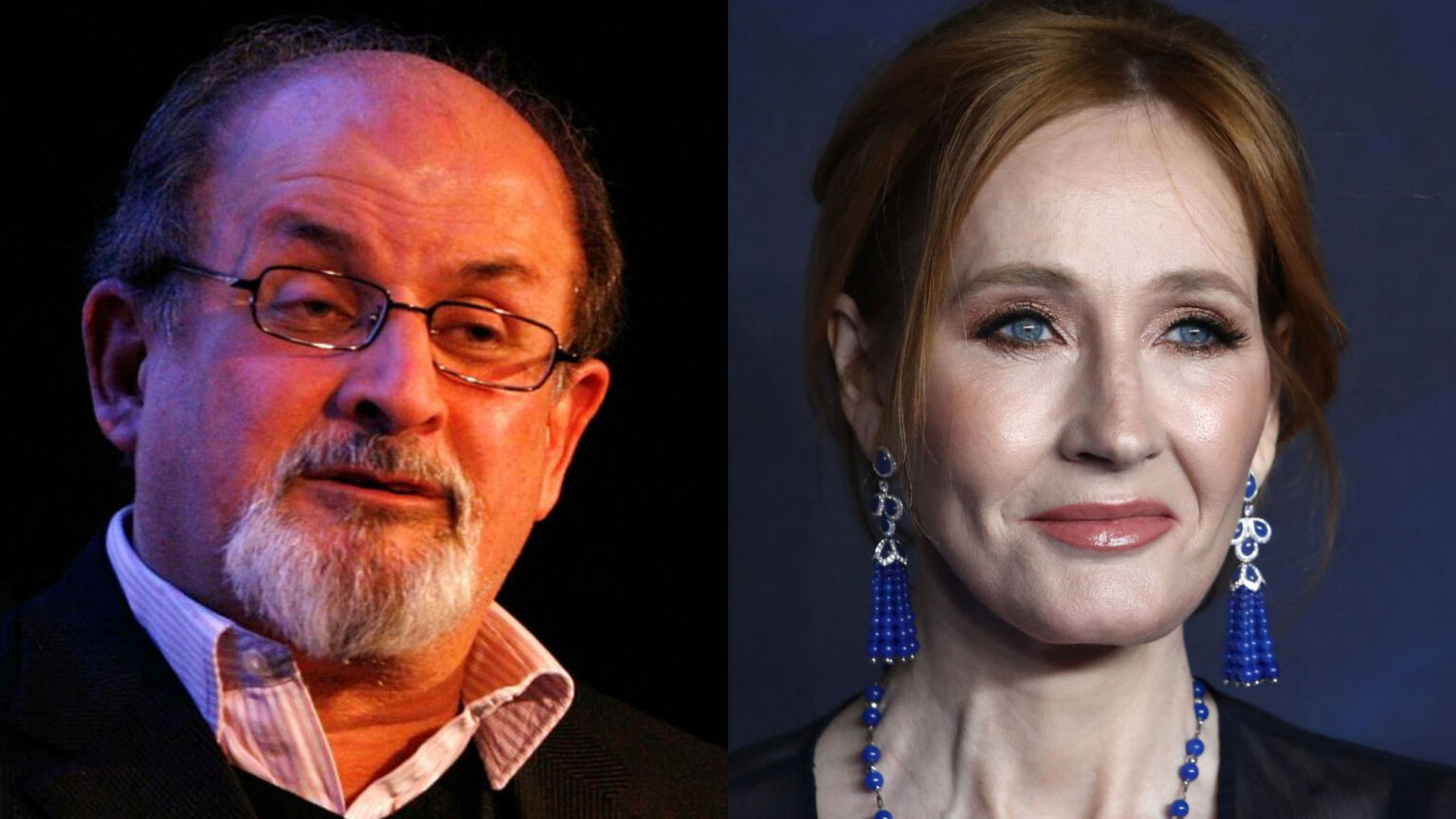 It felt grimly fitting that JK Rowling was subjected to yet another death threat in the wake of the sickening attack on Salman Rushdie. For Rowling is Rushdie to the woke set. With her gender-critical views, she disgusts the preachers of correct thought as much as Rushdie disgusted the clerics of Iran. To the woke ayatollahs of the trans movement and its noisy allies in the media, Rowling is a blasphemer, an utterer of profanity, an apostate of PC. They threaten her with death, as Islamists did with Rushdie. They burn her books, as mobs did with The Satanic Verses. They dream of silencing her, as Iran dreamt of silencing Salman. It isn’t only regressive religious elders who issue fatwas against dissenting writers these days.

‘Don’t worry you are next’, a man tweeted at Rowling when she expressed horror over the stabbing of Rushdie. In this instance the vile intimidator of Ms Rowling seems to be someone with Islamist leanings. That makes a change. Normally the people who threaten Rowling with death – or assault, or rape – are adherents to the cult of transgender rather than the cult of radical Islam. In July a tweeter with the trans flag in his bio posted Rowling’s family address alongside an image of a bomb-making handbook. Another expressed his desire to ‘kill TERFs’ and said to Rowling: ‘I hope you fit in a hearse, bitch.’ Social-media sites overflow with deranged fantasies about Rowling dying a violent death. Seeing someone say to Rowling ‘Bitch I’m gonna kill you’ has become shockingly normal in the 2020s. Probably as normal as it was to hear hardline Muslims say ‘Rushdie must die’ as they chatted after prayers in Tehran back in the day.

Not all of Rowling’s tormentors threaten her with death. Some prefer sexual assault. ‘Suck my dick’, the misogynist hysterics cry. Others prefer ‘Suck my girl dick’, reflecting the woke conviction that penises can be female, a religious belief as cranky as any you’ll hear from the extremist haters of Rushdie. The TikTok burners of Rowling’s books insist her literary impact counts for nought in light of her ‘hateful lobbying’ on trans issues. This tyrannical view is indistinguishable from the grim cries of the mob that gathered in Bradford in January 1989 to burn The Satanic Verses. Creative freedom can go to hell, they said, if it involves ‘blaspheming against Islam’. Young, ‘Be Kind’, Pride Flag-waving TikTokers probably think of themselves as the polar opposite of the stern religious men who burned Rushdie’s novel, but their instincts are the same – to use fire to try to purify the world of a writer’s unconscionable, unholy presence.

The most striking commonality between the woke fatwa issued against Rowling and the religious fatwa issued against Rushdie is the yellow-bellied silence of sections of the liberal elite. We look back with alarm at the failure of some literary and political figures to side with Rushdie against Ayatollah Khomeini’s 7th-century instruction that both he and the publishers of his book should be killed ‘without delay’. And yet shoe-staring has been the response of many of the right-on to the ceaseless threats against Rowling, too. Some in the establishment even conspire with her persecutors. A private school removed her name from one of its houses. Her name was downplayed in the trailer for the latest Fantastic Beasts movie. Many writers have said nil as one of their own has been subjected to vile daily abuse. Like those who shamefully twiddled their thumbs over the Rushdie fatwa, the people pretending not to notice that a regressive, violence-tinged mob has turned Rowling into a devil who must be destroyed are driven by the craven hope that if they stay silent, then maybe the mob won’t come for them. Self-preservation over solidarity; narcissism over liberty.

From Rushdie to Rowling, from religious death threats to woke death threats – it should be clear that the foul death warrant issued by Iran 33 years ago is not as alien, as exotic, as we might think. This is not to downplay the specific nature of radical Islam or the seriousness of the threat it poses to life, limb and liberty. The fatwa against Rushdie was a state-issued edict with transnational consequences, whereas the fatwa against Rowling is informal, more a social-media phenomenon, though with real-world implications of course. Numerous people have died as a result of the Rushdie fatwa, and thousands have perished as a result of radical Islamist zeal in recent years, whereas wokeness tends only to shrink liberty rather than lifespans. And yet the fact that a woke mob of the supposedly righteous can devote itself to tormenting a writer for wrongthink in a not dissimilar way to how those angry mobs called for the punishment of Rushdie should give us pause for thought. It demands that we reflect on where society is going, and what has happened to freedom.

What binds the old mobbing of Rushdie and the new mobbing of Rowling is the violence of narcissism, the tyranny of self-pity. The fragile vanity of those Muslim protesters of yesteryear who raged against Rushdie’s novel finds expression today in the psychic arrogance of trans activists and other identitarians who demand the crushing of any word or idea that runs counter to their own carefully cultivated identity and belief system. ‘Misgender’ them and you’re a speechcriminal. Say ‘Women don’t have penises’ and you’re a blasphemer. You are hurting them with your words. You might even be ‘erasing’ them. Calling into question any aspect of the cult of transgenderism is to 2022 what calling into question the truth of the Koran was to 1989. In both cases, people’s feeling of woundedness upon hearing or reading a contradictory idea is considered too high a price to pay for freedom of speech. And so The Satanic Verses had to be burned to protect the brittle honour of those Muslims who felt offended by it, and Rowling must be silenced to preserve the fact-lite, eccentric identities of men who fantasise that they are women.

The liberty to think and speak is sacrificed at the altar of identitarianism. That was always one of the most striking things about the Rushdie fatwa: it may have been issued by an old-world religious tyrant but in the West it was filtered through the politics of identity. It actually chimed, terrifyingly well, with developments in Western societies, where we also came to accept that it is wrong to ‘insult’ Islam. Only we called it ‘Islamophobia’ rather than blasphemy. And we called for the blasphemers to lose their jobs or the right to speak on university campuses rather than their lives. Through the mangle of identitarianism, that Eastern fatwa became a Western ideology, with the sensitivities of offended Muslims taking precedence over people’s freedom to speak and criticise and mock. The unholy marriage between the old-world idea of blasphemy and the new ideology of identity became clear during the protests against the movie The Lady of Heaven earlier this year. Protesters said they were defending ‘the feelings and the sentiments’ of Muslims. This was the ‘safe space’ version of Islamist intolerance, a wokening of the extremist view that criticism of Muhammad must be crushed. In the post-fatwa West, Islamism has been reshaped – and emboldened – by identity politics.

We end up in a world where freedom is curtailed to appease emotions. Where victimhood is weaponised to silence allegedly transgressive thought. It is the tyranny of fragility, where the existential vulnerability that people are encouraged to feel when any aspect of their precious identity is called into question becomes the deciding factor in what the rest of us are allowed to say and think. This has the terrible effect of implicitly sanctioning violence, or at least dreams of violence. After all, if critical thinking threatens to erase you and your identity, shouldn’t you deploy all means necessary to crush said critical thinking? The ideology of the fatwa is everywhere. It informs everyday life. It is the edict of the Gen Z safe space as much as of the hardline mosque. It’s time more of us took a stand against it and defended freedom of thought for everyone – Rushdie, Rowling, everyone.