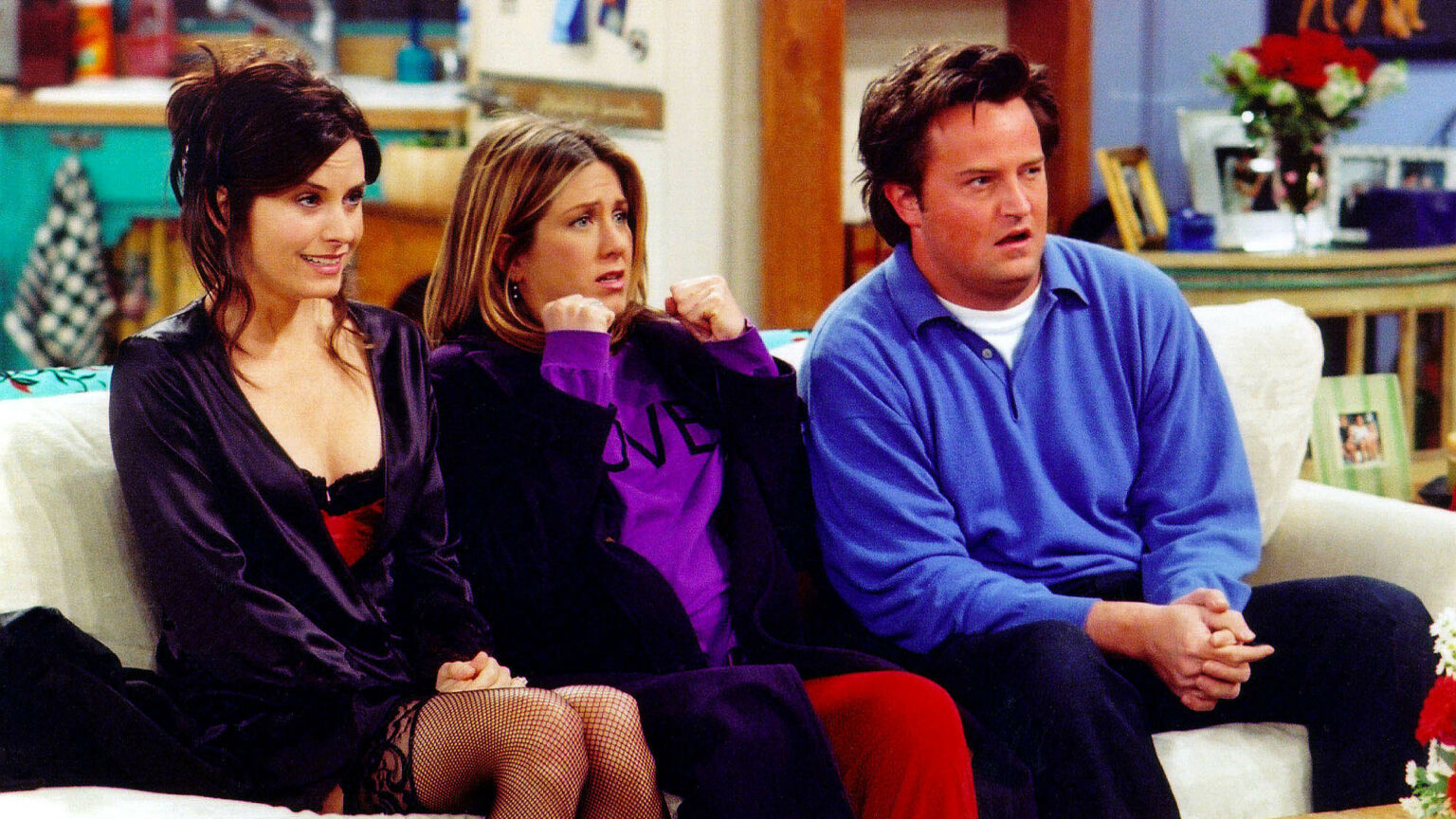 I see white people are apologising for being white again. This time it’s the turn of Marta Kauffman, the co-creator of Friends. She’s really, really sorry that Friends had a predominantly white cast. She’s eaten up by remorse at having been ‘part of systemic racism’. She’s so consumed by regret over her part in the cultural crime of creating a sitcom about six white New Yorkers that she has decided to throw some money at a non-white cause. She’s giving $4million to Brandeis University in Boston to create an endowed professorship in its African American studies department. ‘Will this wash away my sin of whiteness?’, she might as well say as she hands over the penitent cash.

If I was making a sparky 23-minute TV show about this bullshit I’d call it ‘The One With The Nauseating White Guilt’. Everything about Ms Kauffman’s self-flagellation is absurd. She’s ‘embarrassed’, she says, that Friends’ six lead characters were white. She literally uses the g-word to describe how she feels about all this awful whiteness. ‘Admitting and accepting guilt is not easy’, she told the Los Angeles Times. ‘It’s painful looking at yourself in the mirror’, she said. What is this madness? Let’s remind ourselves that the reason Ms Kauffman feels shame – so much shame she can barely look in a mirror – is not because she murdered someone or MeToo’ed a male cast member. It’s because she gave the roles of Joey, Chandler, Ross, Monica, Rachel and Phoebe to white people. ‘What can I say? I wish Lisa [Kudrow] was black?’, said another Friends producer recently. This might just be the maddest talking point of 2022 so far.

Kauffman has publicly flogged herself quite a few times over the whiteness of Friends. At a TV festival in 2020 she said that ‘all I can think about’ is why we didn’t do more to make Friends diverse. Last year, ahead of Friends: The Reunion being aired on HBO Max, she said she had ‘very strong feelings about my participation in a system’. That will be the system of white privilege and unconscious bias, no doubt. Now she has gone the whole hog and flung herself, coated in shame, at the altar of white guilt. ‘I was part of systemic racism. I take full responsibility for that… I was so ignorant.’ Reminder, dear reader: she made a sitcom.

We need to talk about Marta Kauffman’s feelings. I wish we didn’t, but we do. Because there is something genuinely disturbing about a hyper-successful TV producer, the co-creator of one of the most successful sitcoms in history, feeling so much anguish about the skin colour of her actors. This is not normal behaviour. Ms Kauffman should feel ocean-going pride over the role she played in making millions of people across the Earth chuckle at the antics of six NYC singletons. But instead she apparently has to avoid mirrors lest she catch a glimpse of her own shameful, racist visage. If I got crazy rich from producing a joyful televisual institution, I’d be boasting about it til the end of my days. And yet here is poor Marta, prostrating herself before the elders of wokeness, burying her face in the dirt, declaring: ‘I apologise for my ignorance.’ (She literally said that.)

Kauffman seems to have been sucked into the cult of white shame. There really is a cultish feel to some of her recent comments. Just as new recruits to Scientology must undergo ‘auditing’ to cleanse their souls of negative influences from the past, so it seems that members of the cultural elite must be audited for their old, unwitting, allegedly racial prejudices. They must submit to analysis by the guardians of correct racial thinking and confess to any moral blemishes found therein. Kauffman really does sound like someone whose eyes have been prised open by some religious elder. ‘I just… I missed it, I missed it’, she says of her earlier sinful whiteness. ‘And now I look back and think I can’t live like that anymore. I can’t do that anymore.’ Auditing: successful. Candidate ready for the next level of self-awareness.

Friends has been the subject of woke maulings for years now. There are frequent media storms about how unwoke this oh-so-Nineties show was. ‘Why Everyone’s Favourite 90s Show Is Hugely Transphobic’, says one headline (apparently it’s because Chandler’s gay, cross-dressing dad was played by husky Hollywood icon Kathleen Turner, which, I’m sorry, was absolutely brilliant). ‘Friends: 10 times the classic sitcom was problematic’, says a headline in newspaper turned clickbait industrial complex, the Independent. Cosmo has slammed Friends for its ‘sexism, homophobia and fat-shaming’. If they seriously expect us not to laugh at Monica saying of a video of her fat younger self that ‘the camera adds 10 pounds’, and Chandler responding ‘Er, so how many cameras are actually on you?’, then I have news for them.

But the Kauffman thing is more serious. This is an actual Friends creator caving in to these ludicrous accusations. This is Friends itself effectively saying: ‘Yes, we were racist, we were phobic, we were wrong.’ What Kauffman and others should be saying – this is some free advice, guys – is that it is perverse and outright philistine to judge the entertainment and art of the past by the unforgiving standards of the present. That it is repugnant to the ideal of artistic freedom to monitor culture for its racial correctness rather than appreciating it for its quality, its value, its impact. That it is abhorrent to accuse people of being racist simply for making a TV show whose main characters happened to be white. And that it is vindictive, spiteful and envious to try to take down one of the great TV shows of the 1990s just because it fails to adhere to the identitarian eccentricities of the 2020s. I mean, what’s next – Happy Days? (Don’t even think about it.)

Kauffman should have told her unjust persecutors to go to hell. Instead, she indulged them. Indeed, she partook in the woke, modern equivalent of actual indulgences, that medieval Catholic practice where the rich would seek to offset their sins by giving money to the Church. What is Kauffman’s $4million to Brandeis if not an indulgence, if not an act of racial penance designed to absolve herself of at least some of her original sin of whiteness? Whiteness really has come to be seen as a moral stain, an abomination of birth. If you’re born white, you’re privileged, apparently. You’re a beneficiary of colonialism and slavery. You’re a Bad Person. And thus must you check your privilege, and whip your body, and genuflect to BLM, and offer a hearty indulgence to black causes. Only then might you be forgiven for the wickedness of your skin tone.

I’m sick of all this white shame. It is not, as its practitioners would have us believe, the opposite of white pride. On the contrary, it is white pride’s fellow traveller. The white, privilege-checking, self-flagellating, skin-hating members of the cultural elite appear, on the surface, to be consumed by shame. When they atone for their whiteness, or bow down to black people on a BLM demo, or confess to past racial transgressions, they seem to be self-mortified. But in truth they are boasting. They’re saying: ‘I am an aware white person; I am a good white person; I am not like those white-trash hordes who never check their privilege.’ This is the moral complexity that informs the Kauffman story – she’s ashamed, but she’s also proud, because she is telling the world that she has reckoned with her whiteness, seen that it is wrong, and is now making audited amends. Screw that. Was Friends funny or not? That is the only question that matters. My answer, for what it’s worth, is: Yep, it was funny. Thank you, Marta.