Why aren’t we talking about the attempted murder of a Supreme Court justice? 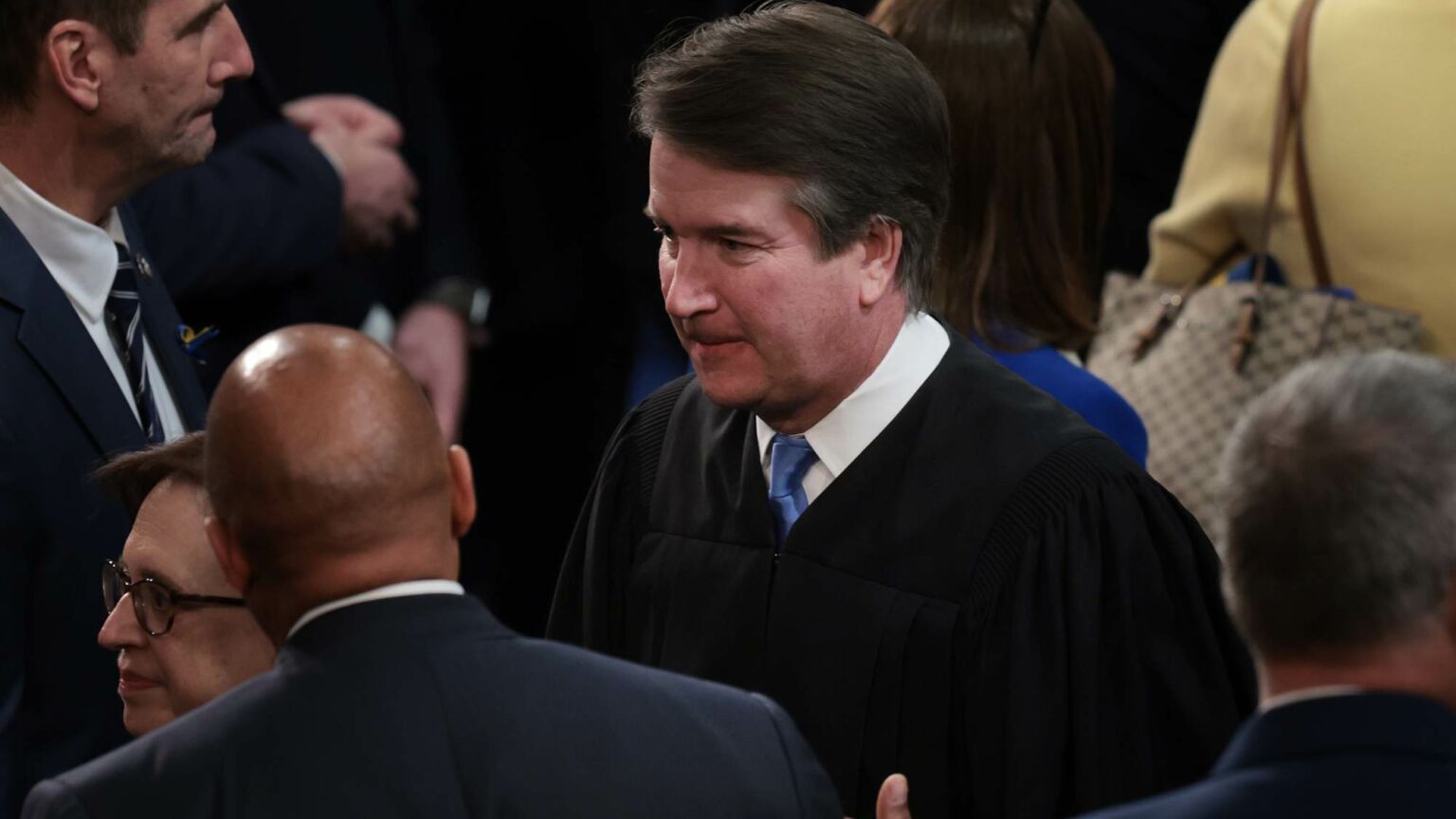 Imagine this scenario. It’s 2015. Ruth Bader Ginsburg is standing up for women’s bodily autonomy. She gives an interview to MSNBC in which she says every woman in America must have the right to a ‘safe abortion’ if she wants one. The pro-life lobby takes umbrage. Activists turn up at Ginsburg’s home and wave placards and shout slogans. They holler ‘Shame!’ as Ginsburg hides inside. Finally they leave, but one pro-life agitator feels so energised by the anti-Ginsburg fury that he decides he must kill the evil, baby-murdering justice. He goes to her home with zip ties, pepper spray, a hammer, duct tape and a gun. The only thing that stops him from carrying out his heinous deed is the presence of two marshals near the Ginsburg residence. The aspiring murderer leaves, bitter that he was unable to slaughter a judge for her political views.

That would have been a global story, right? It would have received frontpage coverage not only in the US but around the Western world. There would have been intense condemnation – rightly so – of this menacing attempt on the life of a justice simply because she holds certain views on abortion. Thinkpieces would have abounded. Direct links would have been drawn between the pro-life gathering outside Ginsburg’s home and the subsequent attempted murder at her home. This shows how dangerous the pro-life / Christian fundamentalist / right-wing set has become, the liberal media would have said. They would have described it as ‘domestic terrorism’ and called for new laws to tackle it. It would have been treated as one of the defining political events of the 2010s, no question.

And yet here’s the strange thing. Something very much like the above scenario did happen, this month, and it is possible that some of you, especially British readers, haven’t heard about it. Or maybe you heard about it in passing. Maybe you saw something on page 20 of your newspaper. Even in the US there has been an ‘eerie silence’ on this recent serious threat of violence against a Supreme Court justice. The justice is male, not female, and it is for his pro-life views, rather than for any pro-choice outlook, that he found himself the target of a suspected murder plot. It’s Brett Kavanaugh, the bête noire of the woke elites, the man whose name has become a byword for male privilege and Trumpian arrogance. So maybe it doesn’t matter that a young man armed with a tactical knife, a Glock 17 pistol and other murderous paraphernalia turned up at his home with the alleged intention of ending his life?

The young man is Nicholas Roske. He is 26 and from California. He travelled to the street in Maryland where Brett Kavanaugh lives on 8 June. That was just a month after Kavanaugh’s home, and the homes of other justices who are apparently thinking of overturning Roe v Wade, was besieged by pro-choice protesters. Roske was approaching Kavanaugh’s home, with his various weapons, when he saw two US marshals getting out of a car. He left and later turned himself in. He has now been charged with attempted murder. According to an affidavit from an FBI agent, Roske says he went to Maryland ‘to kill a specific United States Supreme Court justice’. He says he felt ‘upset’ by the leaked draft opinion suggesting the court might overturn Roe. In a twisted irony he was also upset at the prospect of Kavanaugh loosening gun-control legislation – so allegedly he wanted to use his own Glock 17 to teach the bastard a lesson. It is worth noting that Kavanaugh has two teenage daughters.

Where is the discussion about this? Yes, there has been news coverage, especially in the US, and a little in the UK. But where’s the analysis, the tsunami of op-eds, the social-media anger and concern? The kind of thing that would unquestionably have followed an alleged attempted murder if the target had been RBG or Hillary Clinton or anyone else judged by the liberal media to be on the right side of history? The ‘eerie silence’ even on the analysis pages of the US legacy media led one observer to ask: ‘If someone attempts to murder a Supreme Court justice, but corporate media barely covers it, did it actually happen?’ The Hill noted that ‘most major media outlets covered news of the arrest [of Roske]’, but ‘coverage eventually dropped off’. Which is incredibly strange, no? Think about this in a British context. A man with a gun, a knife and a hammer goes to the home of one of our Supreme Court judges who controversially ruled in 2019 that Boris Johnson’s proroguing of the Remainer Parliament was illegal. Do you think coverage of that would have ‘dropped off’? As if. We’d still be talking about it now. It would be the great debate-ender of our times. ‘Tone down your rhetoric or we’ll have a repeat of that attempted murder of a judge…’ And yet in both the UK and the US, an alleged attempt to assassinate a justice over his moral views on abortion has caused only the tiniest of political ripples.

We shouldn’t be surprised. When it comes to political violence, there’s always an extraordinary double standard. So when then Democratic congresswoman Gabby Giffords was targeted in a mass shooting in Tucson in 2011, armies of commentators pinned the blame on Sarah Palin and other right-wingers who engage in heated political rhetoric. Yet when a Bernie Sanders supporter shot up a charity congressional baseball game in Virginia in 2017, hitting the Republican congressman Steve Scalise, among others, there was very little of that kind of commentary. There’s identitarian hypocrisy, too. Acts of mass violence carried out by white, far-right hate-mongers will linger in the media conscience for years. But hateful acts carried out by members of allegedly oppressed minorities – such as the Christmas parade massacre in Waukesha last year or the numerous acts of anti-Semitic and anti-Asian violence carried out by African American men in recent years – are downplayed, and swiftly forgotten. It’s all about the political use of violence. If an act of violence serves the woke elite’s narratives about hierarchies of oppression and the scourge of whiteness and the dangers of right-wing rhetoric, it will be blown up. If it doesn’t, it won’t be. The act itself (and its victims) only matters to the extent that it can be exploited to fortify the moral domination of the new elites.

This is the real reason that the alleged attempted murder of Kavanaugh has ‘dropped off’ the media and political radar – because it isn’t useful. On the contrary, it’s a problematic event given it threatens to complicate the simplistic narratives that underpin elite consensus. It is especially pesky that this incident should have occurred in the run-up to the ‘January 6’ hearings, which have morphed into a fact-lite, highly politicised showtrial of Trumpian rhetoric and how words can allegedly cause violence. So whose words ‘caused’ the alleged act of attempted murder against Kavanaugh? If Trump’s vague statements on 6 January 2021 can be said to have caused a riot, can the Kavanaugh-bashing of the pro-Roe commentariat and of upper-middle-class protesters be seen as the instigator of Roske’s alleged attempted murder? If Trump saying he loves his supportive protesters was the reason the storming of the Capitol took place, was Chuck Schumer’s 2020 comment to Kavanaugh on the issue of abortion – ‘You have released the whirlwind and you will pay the price’ – the reason the attempted murder of Kavanaugh happened?

In my view, no. A person’s speech is never to blame for what someone else freely elects to do. But it is striking that the coastal elites never ask of their own rhetoric what they ask of Trump’s and other people’s. It’s too awkward, you see. It raises the possibility that if words do wound – an idea I have huge problems with – then furious woke rhetoric might be as much a harbinger of violence as Trump’s tweeting allegedly was. And so the alleged attempted murder of Brett Kavanaugh must be downplayed. A suspected attempted assasination of a pro-life judge following the furious demonisation of him in the liberal media must be forgotten about. It must ‘drop off’. Nothing to see here. Move on. Talk about ‘January 6’. Talk about anything else but this.