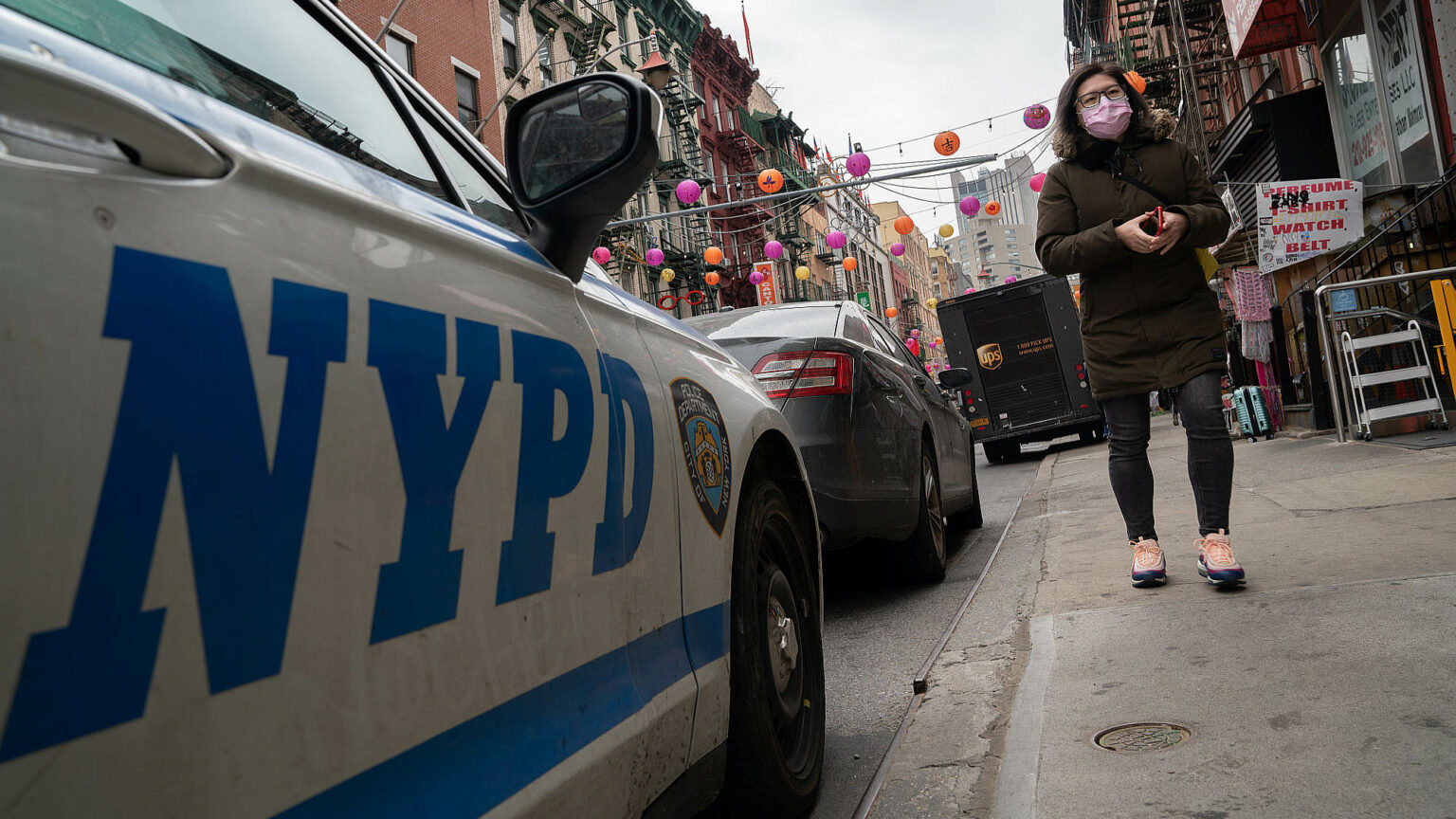 The racism the woke set won’t talk about

Anti-Jewish and anti-Asian hatred has been inflamed by the politics of identity.

‘Silence is Violence’, said Black Lives Matter and its army of media cheerleaders in the tumultuous summer of 2020. In their mind, anyone who stayed schtum about anti-black racism was complicit in it. If you failed to take the knee or put a black square on your Instagram page or faithfully mouth BLM’s political platitudes, then you were an aider and abetter of violence against people of colour. Does this still hold? Is it still the case that saying nothing about racism amounts to supporting racism? If so, then the very same woke activists who spent the past two years saying ‘Silence is Violence’ should turn themselves over to the cops, because racist attacks have spiked horribly in the US in recent weeks and they have uttered not a word about it.

In New York in particular there have been some truly grim racially motivated assaults. On 11 March, in Yonkers, a 67-year-old woman was viciously assaulted on account of her race. She was punched in the face 125 times, had her head stomped on seven times, was spat on, and was subjected to racist epithets. It was so severe that the suspect has been charged with attempted murder. At the start of April, a young man in Brooklyn was set upon by a gang, again because of his race. He was kicked repeatedly and subjected to insults. One anti-racist organisation said it was ‘shocked by the viciousness’ of this act of racist violence.

You haven’t heard about these attacks? Your social-media feed hasn’t filled up with expressions of sympathy or anger? You haven’t seen anyone take the knee for the victims? Well, that might have something to do with who the victims were. The 67-year-old woman punched in the face 125 times is Chinese-American. ‘Asian bitch’, her racist assaulter said as he spat and stomped on her. The young man brutalised in Brooklyn is Jewish. A Hasidic Jew, to be precise. These are not fashionable or favourable victims according to the woke ideology. They place very low indeed in the hierarchy of racial victimhood constructed by the woke elites. Jews, we’re constantly told, enjoy ‘white privilege’. They’re hyper-white, according to some accounts, so how can they be sympathetic victims of racial hatred? As for Asians, they enjoy ‘honorary whiteness’, apparently. We frequently hear about ‘the whitening of Asian Americans’. In short, they’re privileged, and thus suspect – or at least not as deserving of solidarity as other, apparently more oppressed groups.

Then there’s the matter of who carried out these violent assaults. The suspect in the extreme assault of the Asian woman is a black man named Tammel Esco. He has a long criminal record. He has now been charged with attempted murder as a hate crime. The gang that attacked the young Hasidic Jew in Brooklyn was largely made up of black youths. This is not a rare occurrence. Tragically, young blacks attacking visibly Jewish people has become increasingly common in New York in recent years. As Armin Rosen wrote in the Tablet in relation to anti-Semitic attacks in New York City between 2015 and 2019, the ‘overwhelming majority of the alleged perpetrators’ who were caught on CCTV ‘[were] either black or Hispanic’. So what we have in the recent Yonkers and Brooklyn assaults is a case of the wrong kind of victim and the wrong kind of perpetrator. White or ‘white-ish’ victims and black oppressors? Nope – to the woke, addicted to their rigid narratives of privilege and oppression, this just doesn’t compute. So they ignore these attacks. They remain silent – or, as they might once have put it, violent.

The Yonkers and Brooklyn assaults – and their failure to cause much of a stir among the virtue-signallers of social media – point to how poisonous identity politics has become. Anti-Jewish and anti-Asian violence is a very serious problem in parts of the US, yet it rarely registers on the outrage meter of the woke set. As Rosen says, acts of anti-Jewish violence in New York City ‘now pass without much notice, a steady, familiar drumbeat of violence and hate’. When racist violence is treated as just the background noise of city life, a mundane everyday activity not worth commenting on, you know we have a profound problem of racism denial. Anti-Asian violence is becoming an epidemic, too. Attacks on Asians across the US rose by 339 per cent from 2020 to 2021. Some of this will have been related to Covid-19 and the idea that it is a Chinese imposition on the world, but anti-Asian hate predates Covid, of course. There has been an ‘alarming rise in violence against Asian Americans’ in New York, says the Guardian. Over the past year, four Asian women in NYC have been murdered in suspected racist attacks. Three of the suspects were African American, the other Latino.

The stats are depressing. This year already, there has been a 275 per cent rise in anti-Jewish hate crimes, according to the NYPD. Fifteen hate crimes were reported in NYC in January – including the daubing of swastikas on two school buses in a Jewish area of Williamsburg – compared with four reports of anti-Jewish hate crime in January 2021. There have been extreme acts of violence in recent years: five people stabbed during a Hanukkah celebration in Monsey, New York, in December 2019; four killed in a mass shooting in a kosher grocery store in Jersey City in the same month. The suspects in both attacks were African American. And it isn’t just New York and New Jersey. There has been a ‘wave of anti-Semitic violence’ across the US, as NBC says. In 2014, 609 anti-Jewish hate crimes were reported to the FBI; in 2018, 835 were reported, a 40 per cent rise. Anti-Asian hate crimes have surged too. Last year a report published by the Center for the Study of Hate and Extremism at California State University San Bernardino found that in 16 of America’s largest cities and counties, anti-Asian hate crimes rose 164 per cent between 2020 and 2021. The largest increase was in NYC – a 223 per cent spike. Asian Americans have organised protests with the rallying cry ‘Stop Asian Hate’, but they always get far less media coverage and social-media love than BLM.

This is the racism the woke ignore. The racial hatred they turn a blind eye to. The violent prejudice which, if their studied shoulder-shrugging is anything to go by, they don’t have a problem with. Or, at least, they have less of a problem with it than they do with other forms of racial hatred. Yes, part of the problem is the ruthlessness of the identitarian sorting process, which accords moral worth to ethnic groups depending on their presumed victim status. So currently, blacks, Muslims and trans people are valorised as the most put-upon people in our white-supremacist and phobic society, and thus crimes against them must be talked about and protested against vociferously. Jews and Asians, meanwhile – like whites generally, heterosexual people, and ‘cis’ folk – are viewed as beneficiaries of the structures of society, as part of The Privileged. So, by definition, they cannot be victims, certainly not of anything ‘structural’, of any deep-rooted racial animus. For this reason, the sustained onslaught against these groups is implicitly downplayed; it is viewed as a bundle of sad individual cases rather than as being indicative of a broader social rot.

But there is something else at play, too. The politics of identity does not only overlook certain forms of racial hatred – it inflames these racial hatreds. It is not a coincidence that anti-Jewish and anti-Asian violence has risen in tandem with the ideology of woke. Yes, there are longstanding social and cultural tensions between African Americans and Asians and between different ethnic minorities in New York City that predate modern identitarianism. But it seems pretty clear that these tensions have been given a new and terrifying momentum by the woke worldview that relentlessly orders people according to whether they deserve racial sympathy or racial suspicion, and which implicitly pits ethnic blocs against each other. The woke depiction of Jews as hyper-white and hyper-privileged, as a racial clique that hoards resources, acts as a green light to anti-Semitic vilification. The woke branding of Asian Americans as borderline white, as having more in common with the pale and privileged than with people of colour, damns them as the thieves of opportunities that might otherwise have gone to ‘real’ people of colour. The woke are playing with fire. They do not simply ignore certain forms of racial hatred – they facilitate them. It is time we took a stand against all forms of racism, whoever the victims are, and whether their demonisers are old-style fascists or new-fangled identitarians.