Why they can’t let lockdown go

In 2021, the UK’s elitist political blob sought to lock down democracy – again. 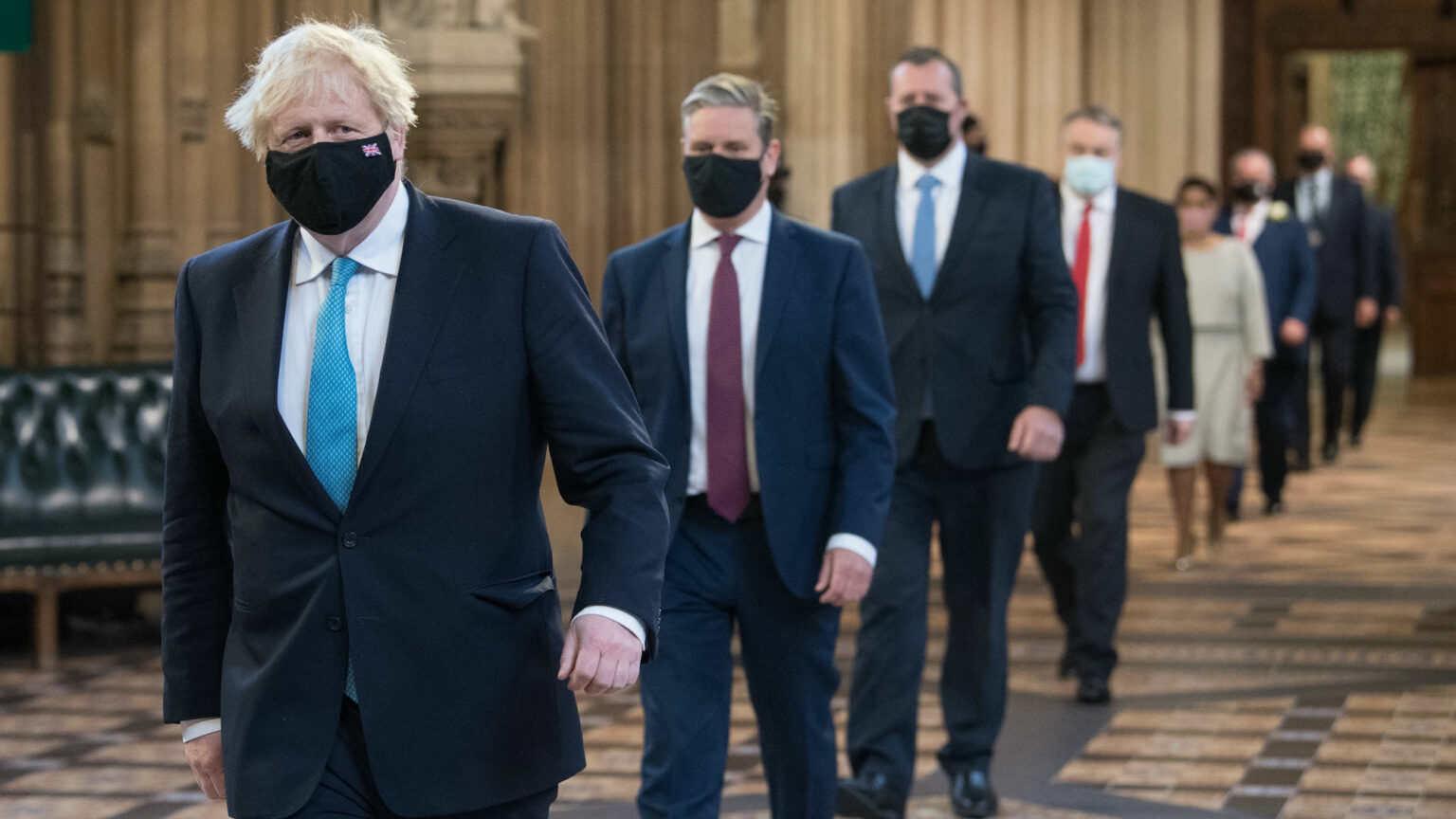 The posh fashion magazine, Vogue, may not always be the first place you turn to test the end-of-year temperature of British political life. But if you want a concise summary of the joyless, miserabilist, anti-human mindset of our political rulers at the end of 2021, look no further than that bourgeois style bible’s recent interview / photoshoot with Nicola Sturgeon, first minister of Scotland and leader of the Scottish National Party.

‘There are few pleasantries’, the interviewer reports of her introduction to Ms Sturgeon: ‘We do not bump elbows or shake hands – she says she hopes she never has to shake another hand again, especially not a man’s…’ (We can agree to spare ourselves the pleasure of reading the rest of it.)

Shortly after this was published, as the satirical magazine Private Eye enjoyed pointing out, the sycophantic Sturgeon was pictured enthusiastically shaking the hand of US president Joe Biden at the COP26 eco-beano in Glasgow. Both leaders were also maskless, of course, despite telling the rest of us to wear one for indoor events.

There is something more than hypocrisy going on here. Sturgeon’s revulsion at the idea of shaking hands with the man in the street has nothing to do with protecting public health. Rather, it expresses the political outlook of powerful elitists, on both sides of the border, who have shown themselves perfectly at home with lockdown politics in 2021, and have been ever keen on the reimposition of more restrictive rules.

These people have not merely put up with Covid-related restrictions on public life and private behaviour as necessary evils. They have embraced the top-down culture of lockdown as happily as they refuse a common handshake. Many among our political elites relish the opportunity to self-isolate away from the electorate – those whom the Victorians called ‘the Great Unwashed’. They have shown themselves happiest when locked away behind the drawbridges of Westminster or Holyrood, ordering the electorate to keep out, keep quiet and keep your hands to yourselves.

The further we get from the dark early days of the Covid-19 pandemic, the more it seems that this attitude is not just about taking emergency measures necessary to cope with a terrible disease. Instead, the Covid crisis has acted as a catalyst to intensify grim political trends that were already evident pre-Covid – from the exploitative use of the politics of fear to the freedom-hating cult of the ‘safe space’. We have reached the point where, when something like the Omicron variant appears, some in power seem very keen to seize upon it as an opportunity to impose their will once more.

As a consequence, this year UK politics has largely been reduced to an attempt to lock down democracy – again. Boris Johnson’s Conservative administration has practised government by edict, imposition and media announcement, with a nod towards parliamentary debates and votes later, if at all. The recent big rebellion by Tory MPs voting against vaccine passports made a lot of headlines, but it was too little, too late to make much difference.

And it’s not just about parliament. There is something more fundamentally anti-democratic about the petty authoritarianism of lockdown politics. It is based on a fear and loathing of the demos, the people. It has sought to reshape the balance between the two factors in democracy – demos (people) and kratos (power) – into something more akin to a doctor-patient relationship, where the people merely follow expert advice and do as we are told. They want to reduce us to the objects, rather than subjects, of political action.

One important factor in this has been the drive for Remainer revenge. The Remain establishment is still in shock from the popular uprising of the Brexit votes in the 2016 referendum and the 2019 election. Ever since, the unelected, elitist blob has been desperately seeking to roll back the democratic tide and take back control.

In 2021 we saw examples of it across society, from civil servants imposing trans ideology on government employees behind ministers’ backs to top judges using the Meghan Markle case to impose tougher privacy laws on the press – laws which have never been passed by parliament. Lockdown politics fits well with this outlook, allowing the state machine to rule by decree while keeping the masses isolated indoors, away from the powers-that-be and each other. Whatever goes on in Westminster and Whitehall, we are not invited to the party.

What has all of this meant for parliamentary party politics? At the end of 2021 Boris Johnson’’s popularity and authority appear to be collapsing, although alternative Tory prime ministers are less apparent. The other uncertainty is – how much does it matter? Several observers have noted that the UK looks increasingly like a one-party state, with Keir Starmer’s Labour backing all of the government’s restrictions and only complaining that Boris and Co never lock down early, long or hard enough. Labour remains unlikely to win like this – even the Liberal Democrats have appeared more attractive to voters in some recent by-elections. And even if Starmer were to pull off an electoral upset, it would only make lockdown politics worse.

Sturgeon’s Scotland, meanwhile, remains a real one-party state, the SNP controlling everything from the civil service to the police, unchallenged by a tame media. She has used that position to become the pin-up person (literally – see Vogue) for Britain’s lockdown left.

Let’s be clear. We are not facing some conspiratorial threat of jackbooted political fascism, as even some blowhard Tory MPs have suggested. The technocratic, something-must-be-done control-freakery of lockdown politics is a substitute for any real political vision of the future, seized upon by vacuous politicians who believe in nothing beyond their own survival – and the need to regulate the behaviour of the public.

This might well seem a sad state of affairs for those of us who celebrated and encouraged the democratic spirit of the Brexit revolt. Now it can appear that the unaccountable establishment blob is largely back in control, and worse, that many worried people are going along with it. But there are undoubtedly many who also feel put-upon by elitist lockdown politics, and want nothing to do with the political madness of anti-vaccination campaigns, yet lack a voice to protest. In 2022, we need to continue to raise a banner for liberty, give them that voice, and politically shake hands with each other.