The ‘war on terror’ has been a disaster

Since 9/11, Western intervention has unleashed more mayhem than al-Qaeda could ever dream of. 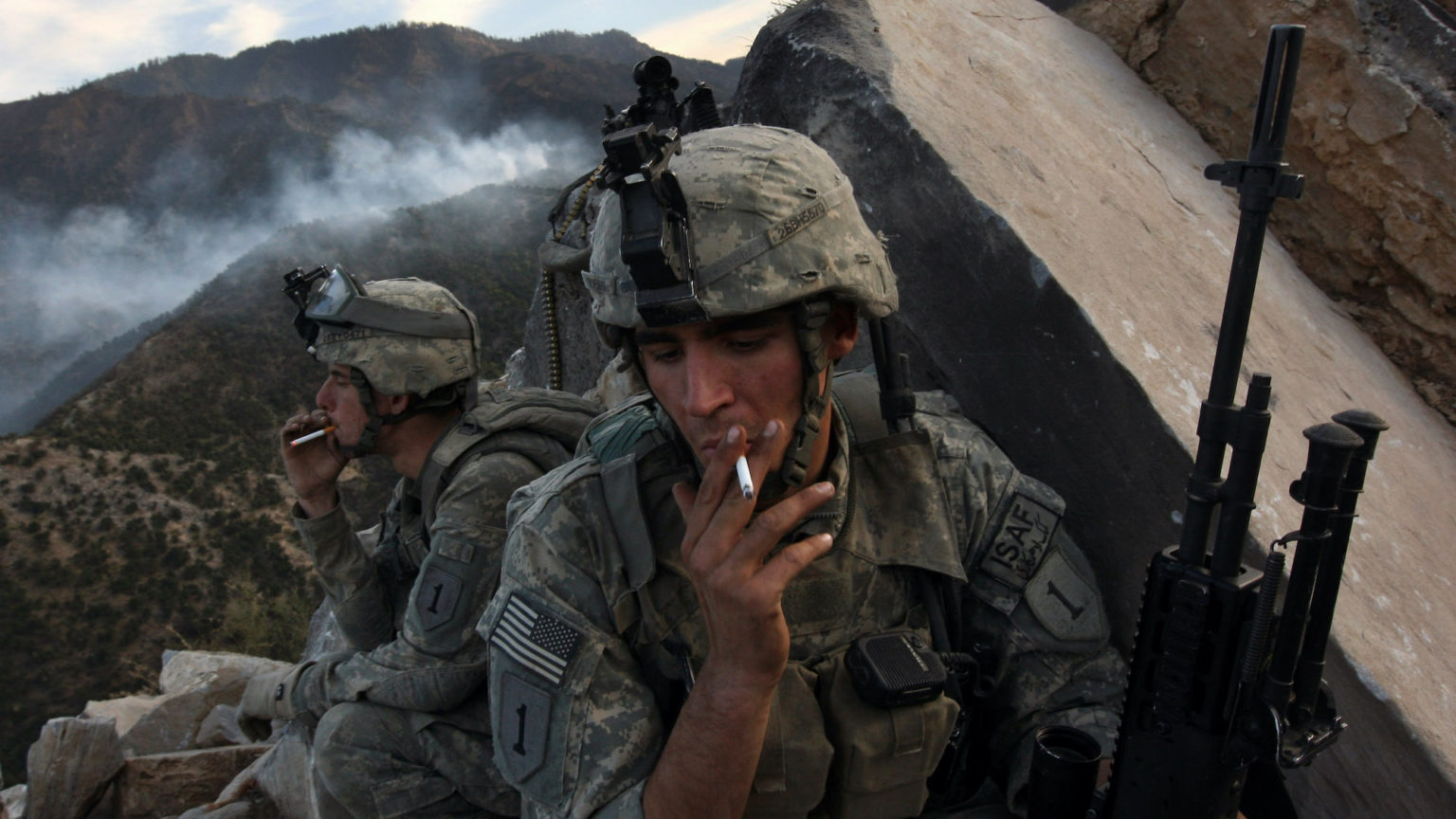 During the 1990s, the US had been struggling with its post-Cold War role. It had become the world’s sole superpower. But without its Soviet rival, and the project of defeating Communism, it lacked a sense of purpose.

Some in America’s foreign-policymaking establishment – including soon-to-be influential figures, like Donald Rumsfeld and Paul Wolfowitz – wanted the US to continue, Cold War-style, to seek out and curtail rival powers. Others, drawn guiltily and excitedly to grandstanding interventions in Sierra Leone and Kosovo, sought to refashion the US-led West as a blue-bereted force for good – a liberal-interventionist power with a ‘responsibility to protect’. All felt that the solution to America’s existential doubt, its want of purpose, was to be found in its actions abroad.

Washington’s response focused and intensified both liberal interventionism and Cold War-style Manichaeism. Because now the US had a moral, political cause – or, as then vice president Dick Cheney put it in 2002, ‘a single, immediate, global threat that any roomful of experts could agree upon’.

President George W Bush, already surrounded by a hawkish foreign-policy team, was a man transformed. Hitherto he had shown little interest in foreign affairs. Now he could see that it provided America’s post-Cold War elite with something that domestic politics could not – namely, a mission.

Speaking from Washington National Cathedral three days after 9/11, Bush’s rhetoric was messianic – he vowed to ‘rid the world of evil’. Six days later, he gave this dualistic worldview its lasting expression – the US and its allies were to wage ‘a war on terror’. It ‘begins with al-Qaeda’, Bush told the nation, ‘but it does not end there. [The war] will not end until every terrorist group of global reach has been found, stopped and defeated.’

Righteous, boundless and interminable – this was war after 9/11. It was not really governed by material concerns and strategic interests. Like the liberal interventionism that informed it, it was a hypermoralised crusade against the abstract forces of ‘evil’ or ‘terror’. It was existential, a means to provide the US-led West with a sense of purpose.

But, as abstract as the war on terror was, it still had to be fought somewhere – this was a performance of Western virtue in need of a stage. And so, from 2001 onwards, the US and its allies toured their morality play around Asia, the Middle East and Africa. They fought actual wars in Afghanistan from 2001 and in Iraq from 2003. They fought proxy wars in Yemen and Somalia from 2001. And, increasingly, they enjoyed risk-averse drone wars everywhere else. Even after the Obama administration started to retire the phrase ‘war on terror’ in 2009, the US continued the performative post-9/11 interventions against evil, first in Libya in 2011 and then, later that year, through a series of proxies in Syria.

The theatres for this performance varied, but the interventions themselves were remarkably similar. They were presented as simple operations – to stop evil people doing evil things. And they were justified by cheerleading pundits with easy moralistic slogans – ‘who will save Iraq?’, ‘we can’t stand by and let innocents in Syria die’, ‘we’re fiddling while Libya burns’, etc.

But these interventions always escaped their authors’ simple-minded intentions. The war in Afghanistan began as a mission against al-Qaeda but turned into a vast, two decades-long occupation.

The 2011 intervention in Libya began as a no-fly zone ‘to protect the Libyan people from immediate danger’. In March 2011, Obama even said that ‘broadening our military mission to include regime change would be a mistake’. Within months, however, US secretary of state Hillary Clinton was laughing about Colonel Gaddafi’s brutal execution as his regime collapsed. Libya soon fragmented and descended into a civil war that is still raging to this day.

And the intervention in Syria started life as a US demand for President Bashar al-Assad ‘to get out of the way’. It soon degenerated into an intractable civil war, in which the US backed rebellious army officers, multiple Islamist militias and, after the rise of the Islamic State, the Kurds – whom it then betrayed. Today, after the deaths of hundreds of thousands of Syrians, and the displacement of many more, Assad is still in partial power.

Even the war in Iraq, which was waged from the start with the intention of getting rid of Iraqi president Saddam Hussein – ‘a homicidal dictator with an addiction to weapons of mass destruction’, as Bush once put it – was meant to be straightforward. Jay Garner, the US official in charge of Iraqi reconstruction, described the mission in March 2003 as follows: ‘[S]tand up a government in Iraq and get out as fast as we can.’ US troops are still there now, and the Iraqi government, holed up in a fortified compound, like its fallen equivalent in Kabul, is as illegitimate as it ever has been. Indeed, with its principal source of support coming from Iran, the US-backed Iraqi state has been suppressing the protests of its own people for the past two years.

Twenty years on, the lessons are clear. Everywhere touched by post-9/11 interventionism has been plunged into chaos and violent conflict. The very people the West set out to help have been left disempowered and impoverished. Tired of violent instability, some have even begun to miss the dictatorships from which the US ‘liberated’ them.

And no wonder. These interventions didn’t just challenge the evildoer du jour, be it Saddam or Gaddafi. They invariably undermined or removed any source of cohering political authority, no matter how repressive it may have been. And without that, there was little to hold these nations together. The resulting power vacuum would then suck the US and its allies into an interminable occupation, complete with a futile attempt to impose nationhood on recalcitrant peoples, as in Iraq and Afghanistan. Or it would lead to something arguably worse – a societal disintegration, in which political, tribal and religious factions, backed by conflicting regional powers, fight for partial control, as in Libya and Syria.

It is estimated that close to one million fatalities are directly attributable to these wars on terror and evil. The figure for those who have lost their lives thanks to the violent chaos these interventions have left behind is likely to be higher. Then there are the nearly 40million people who have been displaced. In sum, the post-9/11 wars are little short of a manmade disaster.

And the grimmest irony of all? Twenty years on from its launch, the abstract ‘war on terror’ has increased the concrete threat of terrorism. Which is hardly a surprise. Through their interventions, US-led powers created ungovernable spaces in which Islamists have thrived. The Islamic State, for instance, emerged in wartorn Iraq in the mid- to late 2000s as ‘al-Qaeda in Iraq’ – a lead actor in the nihilistic insurgency against the US occupation. It later morphed into ISIS and took advantage of the US-stoked instability in Syria in the early 2010s.

In 2018, the Washington-based Center for Strategic and International Studies put the number of active terror groups at 67, its highest level since 1980. The number of fighters could be as high as 230,000, which is a 270 per cent increase over the 2001 estimates.

By any measure, these wars waged against terror have failed.

Perhaps now, after the West’s disastrous withdrawal from Afghanistan, the era of post-9/11 interventionism is finally drawing to a close. After all, who, looking at the ruins of Basra or Aleppo or Tripoli, could say these were good, moral interventions? They may have been launched with do-gooding intentions, but they have paved the way for all kinds of hell.