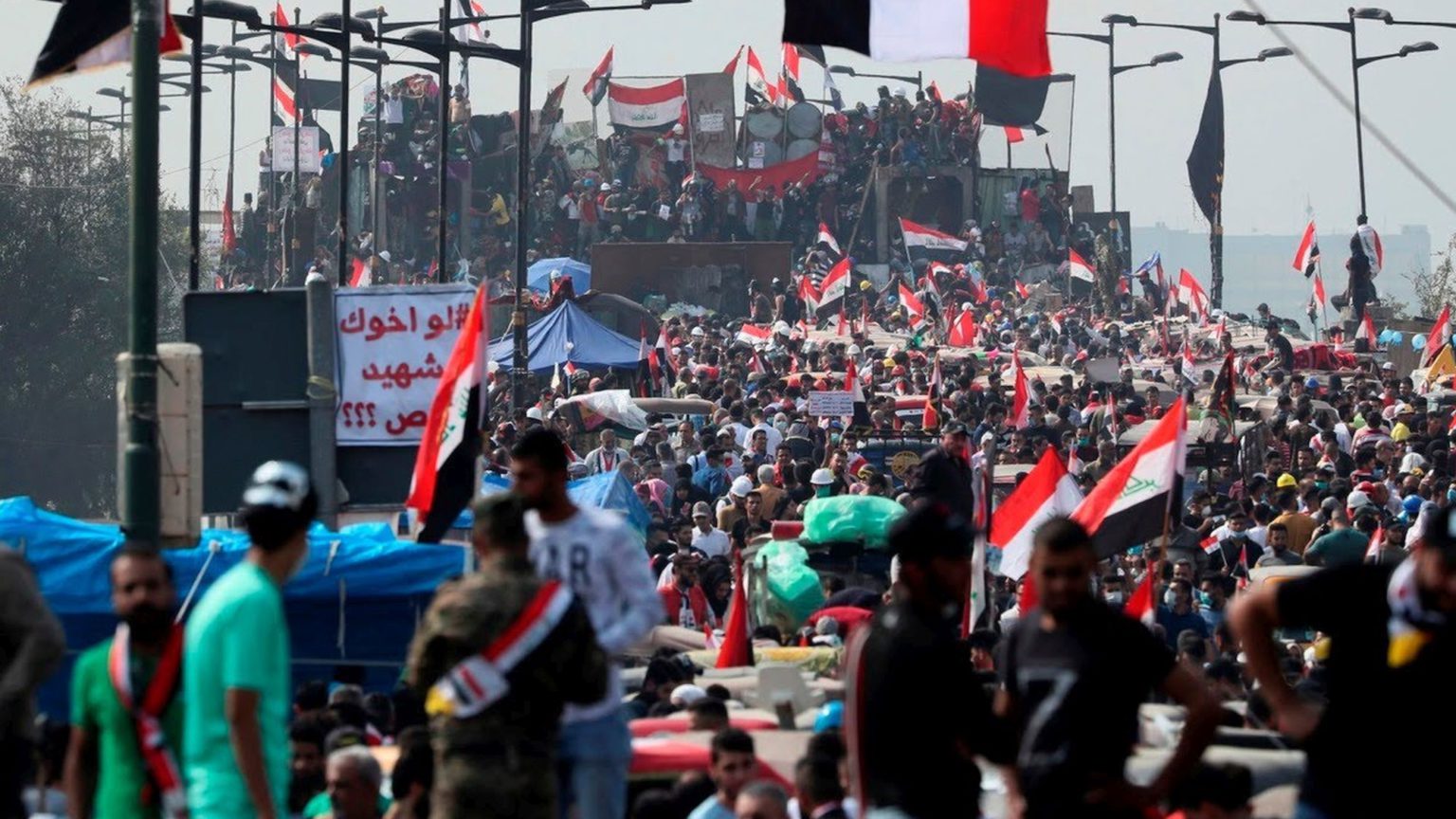 The Iraqi people are rising up against Iran

The protests sweeping Iraq mark a significant new phase for the beleaguered country.

Since the US-led invasion of Iraq, and the overthrow of Saddam Hussein’s despotic Baathist regime, violent unrest has never been far from the surface of Iraqi daily life. But the protests now sweeping a host of southern Iraqi cities, with the eye of the storm in the capital Baghdad, are different to those that have gone before.

Not in basic aspirations, perhaps. Those now out on the streets in southern Iraq are calling for many of the same things that those who protested in northern Iraq in 2012-13 called for: jobs, an end to political corruption, investment in Iraq’s war-ravaged public infrastructure, and the cessation of Iranian interference in Iraqi affairs.

And they do not really differ in the brutality of the Iraqi state’s response to them. In the protests seven years ago, over 200 people were killed and many more were injured. This time, the security forces have so far killed over 300 people and injured an estimated 15,000. The state’s response to protest has once again been brutal and ruthless.

No, what’s different this time is who is doing the protesting. Ever since 2003, the source of unrest, and sometimes violence, was principally to be found among Iraq’s Sunni minority. And for good reason. Iraqi Sunnis, having prospered under the Baathist regime, had been disenfranchised by the post-Saddam political settlement, and actively discriminated against by a Shia-dominated officialdom. Their situation was fertile ground for both protest and, far worse, al-Qaeda and ISIS-style jihadism, which was directed against what they saw as their Iranian-backed Shia oppressors.

But the protests this time have not sprung up in Sunni-dominated Fallujah. They have erupted in Baghdad, among Shia Muslims. They have erupted among those from whom the post-Saddam Iraqi state has tried to derive support and legitimacy. They have erupted, just as in Lebanon, among those to whom the Iraqi state’s principal backer, the Islamic Republic of Iran, has always sought to appeal. Indeed, for all the protesters’ demands for an end to corruption and the provision of basic amenities, what has been particularly striking has been their animosity towards Iranian interference in Iraqi public life.

Some of the protesters’ claims of Iranian interference may be overstated, but it is undoubtedly true that the Islamic Republic is now deeply enmeshed in the Iraqi state. It shouldn’t be a surprise, though. Iran’s regional strategy has always centred upon expanding its influence in nearby countries with substantial Shia populations, from Yemen to Lebanon. Hence the presence of proxy Iranian militias in these territories.

Ironically, it was the decision of the US-led ‘coalition of the willing’ to get rid of Saddam in 2003 that provided Iran with its opportunity to make significant inroads into Iraq. With Qasem Soleimani, a major general in the Islamic Revolutionary Guard Corps, and commander of its overseas Quds force, taking a lead, the Islamic Republic took advantage of the post-invasion power vacuum in Iraq to entrench its influence.

The next key moment for Iran to deepen its power base in Iraq arrived with the rise of ISIS in 2014. For while the US may have been leading the aerial bombardment against ISIS, it was the myriad Iran-backed militias that took the fight to ISIS on the ground. Where the US-trained Iraqi army melted away in the face of ISIS, the Shia militias, taking the Islamic Revolutionary Guard Corps as inspiration, remained resolute. Many fighters were reported to have carried photos of Ayatollah Khamenei with them into battle.

So dependent during the war with ISIS did the Iraqi state become on what was effectively a largely Iran-backed coalition of militias that it was rebranded as the Popular Mobilisation Forces (PMF). Again, it is an indication of Iran’s influence in Iraq that the largest militia among the PMF is the Badr Organisation, which, according to Reuters, is Iran’s oldest proxy in Iraq. Think of it as Iraq’s version of Hezbollah. Badr is headed up by Hadi Al-Amiri, who fought for Iran against Saddam in the 1980s, and who stated in 2015 that Iran’s Supreme Leader Ayatollah Khamenei ‘is the leader not only for Iranians but the Islamic nation’. He added: ‘I believe so and I take pride in it.’ Amiri’s influence in Iraq doesn’t stop with the PMF. He is also Iraq’s interior minister, a position in which he’ll see many familiar faces, given other members of Badr are also part of the rather fractured state-security apparatus.

But the problem for Iran is that it is no longer merely taking advantage of Iraq’s internal problems to consolidate itself and expand its influence. It is no longer simply garnering support from Iraq’s Shia majority for providing some semblance of order and security (especially in the midst of the battle against ISIS). No. Now it is deemed utterly complicit in the continuation and deepening of Iraq’s problems. It is seen as being as culpable in plundering Iraq’s resources as Iraq’s own pocket-lining officials are. Indeed, it is seen as a colonising force, with interests distinct from native Iraqis – as much the enemy as Iraq’s own hated political class. It was telling that protesters in Basra attacked not just government buildings, but the headquarters of various Iranian-linked militias.

It goes both ways, too. Many suspect, with good reason, that it is Iranian-backed militias, nominally part of the state-security apparatus, that are responsible for the murderous response to the protests. ‘We have confirmed evidence that the snipers were elements of militias reporting directly to their commander instead of the chief commander of the armed forces’, Reuters reported an unidentified Iraqi security source as saying. This is a narrative that members of the Iraqi government are keen to sustain, largely because it might absolve them of responsibility for the crackdown. Iraqi president Barham Salih has even expressed support for the protesters and blamed the targeting of demonstrators, journalists and activists on what he called ‘enemies of Iraq’ and outlaws.

The protests mark a new phase in Iraq’s miserably tumultuous recent history. Some usually reliable observers have noted that it is unclear what the protesters want, beyond the removal of the current corrupt political caste. But one thing does seem clear. A growing number of Iraqi people desperately want a government that responds to their interests and needs, rather than those of foreign powers. And that doesn’t just mean the Islamic Republic. It means Western nations, too.