Scottish politics is getting a much-needed shake-up

The emergence of new parties should give a welcome jolt to the tired SNP oligarchy. 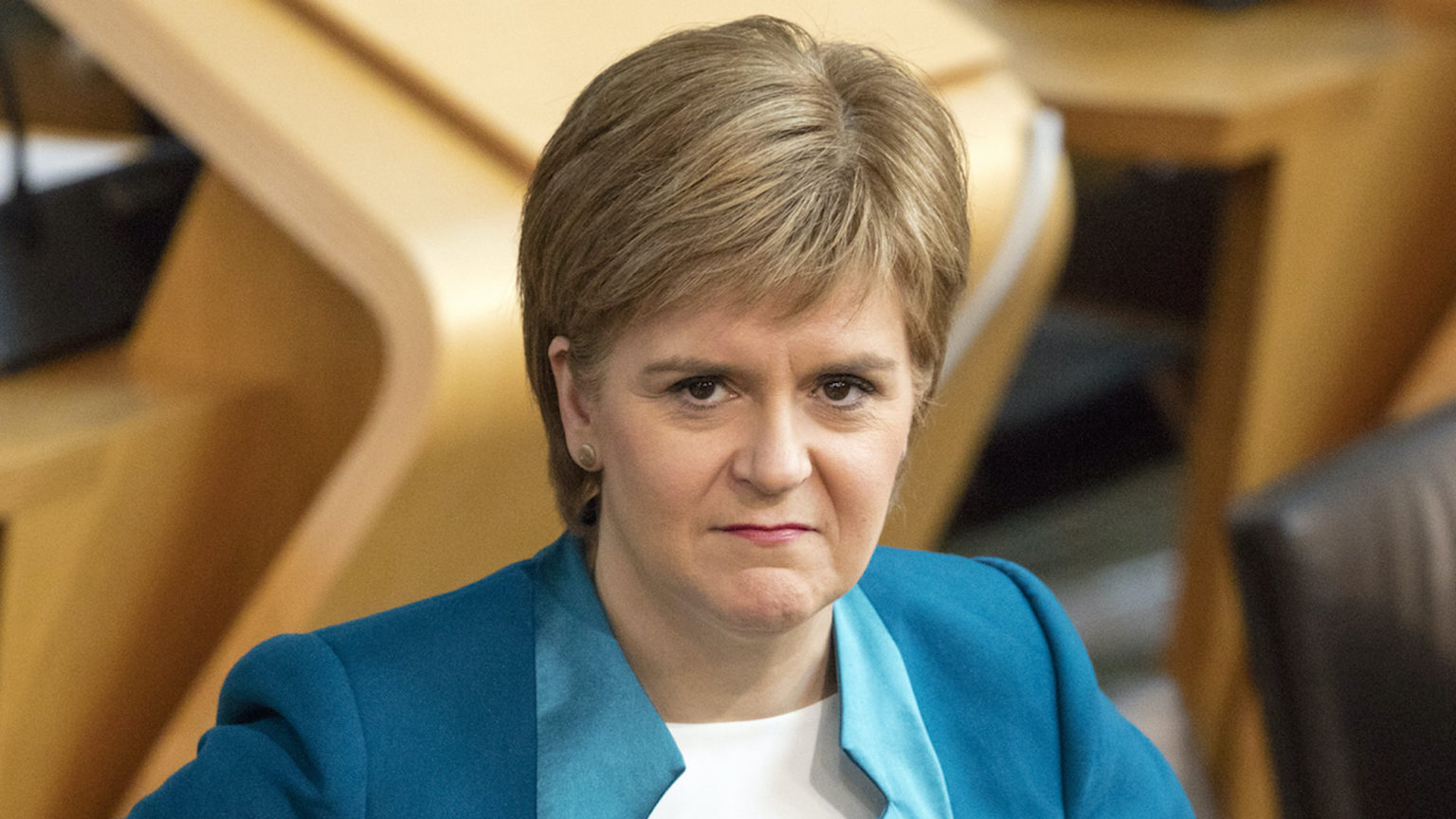 ‘There is only one way’, said actress Neila Stephens in the SNP’s new advert last week. Not surprisingly, the ad, which featured Nicola Sturgeon looming Big Brother-style across banks of TV screens, quickly became a subject of derision. After all, the Scottish government has become notorious for its attacks on the freedom of its citizens. The recent Hate Crime Bill even encourages policing of what people say within their own homes.

But the ad was also a reminder of Scotland‘s predicament: during the 14 years of a de facto one-party state, in which SNP politicians are shielded by an unaccountable bureaucracy, the lack of an effective opposition has given rise to a sense of unease and sometimes resentment.

In the context of this one-dimensional political scene, the emergence of some new political parties on the ballot paper for the Holyrood elections next month is welcome. In a political culture starved of dissenting voices, new blood has captured attention and even jolted a little life into a political sphere which has long been suffocated by the vice-like grip of the SNP.

Two newcomers have featured particularly prominently in the news. On the pro-independence side is the Alba Party, an outfit led by Alex Salmond. It aims to create a ‘supermajority’ of ‘Yes’-supporting MSPs to accelerate independence. Alba advocates starting negotiations to leave the UK in the first week of the new parliament, backed by street-based popular protest. It’s a stance designed to contrast with the ever-cautious approach of the SNP, which has again backed off from an independence referendum for now, saying it’s not appropriate if Scotland is ‘still grappling with [the pandemic] in a way similar to now’.

On the other side of the divide is the new All for Unity (A4U) alliance. Led by ex-Labour MP George Galloway and Jamie Blackett, a farmer, ex-soldier and long-standing Conservative, A4U opposes the SNP’s Neverendum and advocates repairing Scotland’s appallingly bad public services. It hopes to achieve this by standing candidates in regional lists, and recommending tactical votes for Labour, the Conservatives and the Liberal Democrats in constituency ballots.

A few other, less prominent contenders among this tapestry of new voices are worth noting, too. Comedian Leo Kearse is running against Humza Yousaf, highlighting the authoritarianism of this most illiberal justice secretary, who is responsible for the Hate Crime Bill. The Abolish the Scottish Parliament Party is taking a stand against devolution, saying we should get rid of the ‘wee pretendy parliament’ in Holyrood. Restore Scotland, meanwhile, stands for Scottish independence – but against the European Union.

To put things into perspective, these new initiatives combined are predicted to gain little more than 10 per cent at the ballot box. Nevertheless, their very existence demonstrates a desire in some quarters to break the mould.

Scottish politics has, since 2014, largely been in a state of suspended animation. And yet it is the prospect of an alternative to the deadening mainstream that the commentariat seem most concerned about. Scotland’s broadcast media – which has a comfortable relationship with the SNP, to say the least – refuses to include Alba or A4U in its televised leaders debates. With notable exceptions, the print media have mainly amplified any and all personalised attacks on Galloway and Salmond, contrasting the pair with Sturgeon’s supposed ‘decency’.

Elsewhere, the disdain for the Scottish electorate is writ large, voiced through attacks on the new parties. In the New Statesman, Alba voters are painted as ‘saltire-pilled’ ‘alt-nats’ who will simply dance to the tune of a ‘bekilted ally of Faragaism’. For those concerned with propping up the decaying parties of the union, disillusioned voters seeking alternatives represent ‘a rage vote’ which ‘opportunists’ seek to take advantage of, according to the Spectator.

So what has brought these new forces into the picture, and what are the prospects for genuine change?

Much of these recent developments are expressions of the culture war, rather than the class-based party divisions that once dominated political affairs. These divides have been slower to break out into the open in Scotland than in the rest of the UK, but now they can no longer be ignored. Declining loyalty to the Union has ensured that a New Labour-style technocratic party such as the SNP can retain a considerable measure of popular support on the back of disdain for Westminster. This was most notable in the 2014 independence referendum, where as many as two thirds of voters in some working-class areas and the ex-industrial heartlands voted ‘Yes’, while significant sections of the middle class preferred the presumed stability of the Union.

Since then, support for Scottish independence has started to take on a different feel. The SNP has redefined itself primarily as an anti-Brexit party, and has become more overtly woke. Consequently, Scottish ‘Yes’ voters often fit the profile of middle-class, younger, university-educated Remainers. For those who saw Brexit as destabilising, independence – becoming wrapped up in layers of Scottish (and, ideally EU) bureaucracy – seems a more comfortable proposition than remaining in a 300-year-old union and being forced to engage with the unpredictability of mass democratic politics.

The emergence of the Alba Party is partly a consequence of these shifts. Some of the more traditionalist supporters of the SNP have been increasingly alienated by its woke politics, as well as its legislative attacks on long-standing community values and on fundamental freedoms. Others reject the SNP’s insistence on rejoining the EU. Finally, perceptions of Nicola Sturgeon’s competence have taken a hit, not least from the recent Holyrood inquiry, which exposed the SNP’s secretive, evasive and cliquish form of governance.

Alba’s emergence provides a home for disaffected independence supporters. But can it succeed? We got a hint of the problems it faces last week, over the issue of rejoining the EU. This has been the most important factor giving the independence movement coherence in recent times. Given that the UK has already left the EU and the EU’s vaccine chaos has damaged the appeal of rejoining, Alba says it will seek membership of the European Free Trade Association (EFTA) rather than of the EU. This will not only create tensions in the independence movement; it will also require convincing independence voters to commit to a resolute project of ‘taking control’ – an objective for which there appears to be little appetite. The fiction of ‘independence within the EU’ is what has enabled the independence movement to evade the difficult question of how to create a sovereign state for so long.

Alba has also gained support for its criticism of the SNP’s identity-politics agenda. It has won support from gender-critical feminists for its resistance to self-ID and the eradication of women-only spaces. It is right to take these stances. But Alba’s plans for an ‘‘all-women safe space’’ conference are a different matter. This suggests that the realm of politics should be a gender-segregated space. This, in turn, shows that Alba is far from immune from identitarian forces that would restrict us to commenting only on affairs that we have a direct interest in. This is a trend that undermines fundamental tenets of democracy.

It is not clear that Alba even recognises Scotland’s democratic deficit – a failing which is most evident in the parliamentary set-up. Speaking last week, Salmond appealed to the famous 1320 Declaration of Arbroath – a letter asserting the independence of the Kingdom of Scotland – and claimed that ‘our task is therefore to give voice to Scotland’s modern Community of the Realm’, of which ‘Scotland’s Parliament is the modern democratic expression’.

The problem is that Holyrood has completely destroyed representative local democracy in Scotland. Nearly half of all MSPs come from a ‘floating’ regional list of candidates who do not represent any particular constituency. Once in power, MSPs merge with a vast extra-parliamentary network of experts and lobby groups to decide policy – beyond the reaches of voter influence. Alba doesn’t only ignore problems of democratic representation — it favours the cynical, technical manipulation of the list system to create supermajorities over the much harder task of winning arguments for a new sovereign state.

On the other side of the independence divide, the emergence of All for Unity and similar anti-SNP initiatives is also rooted in the changes of the past few years, primarily the hollowing out of traditional unionism.

Traditional unionism – as pursued by the Conservatives, the Liberal Democrats and Labour – presented a commitment to the UK in terms of support for Scotland’s place within the Union. But recently, this has started to change. As the SNP and Scottish nationalism more broadly have become the focus of so much ire, those seeking to retain Scotland’s place within the Union have increasingly presented their ideas as ‘anti-SNP’ and as ‘anti-nationalism’ in general.

This shift has been formalised by the likes of the Majority, a campaign group aiming to ‘unite the silent majority who want to fight back against the nationalists’. The change is not surprising, given that there is so little substance to contemporary unionism. After decades of failing to articulate what it stood for, unionism is on the back foot. Brexit came about thanks to voters rather than political parties with strong, clear ideas about what a newly sovereign UK would stand for – and this means Scottish unionists have few intellectual resources to draw on.

All for Unity and similar groups advocate taking the fight to Holyrood in a cross-class, cross-political spectrum movement for the good of Scotland – all with the aim of stopping Scottish separatism. But the downside of prioritising an ‘anti-nationalism’ position is that it has led it into unfortunate compromises and problematic alliances. Take, for example, the Hate Crime Bill. A4U took an admirably robust stance against it and the alliance’s manifesto promises to repeal it. Yet in the election campaign, this has barely been mentioned. And A4U has continued to seek an alliance with the Scottish Labour Party, which supported the Hate Crime Bill, as well as many of the SNP’s other illiberal policies.

New parties are most attractive when they put liberty and democracy at the forefront. At least then constitutional questions can be resolved in accordance with more worthwhile political ambitions. That said, to my mind, the emergence of the new Scottish parties and voices should be welcomed. In putting new ideas on the table – resisting some of the worst manifestations of identity politics, advocating repealing the Hate Crime Bill, grappling with how Scotland fits within supranational institutions such as the EU – they have given air to important issues and raised questions as to how to cater to the aspirations of voters who despair at where the SNP’s one-party state has taken Scotland.

Alastair Donald is co-convenor of the Battle of Ideas festival and author of The Scottish Question, one of the Academy of Ideas’ latest batch of ‘Letters on Liberty’.