So is Joe Biden a Nazi, too?

Biden is doing a lot of the things Trump did, and yet he isn’t being called Literally Hitler. 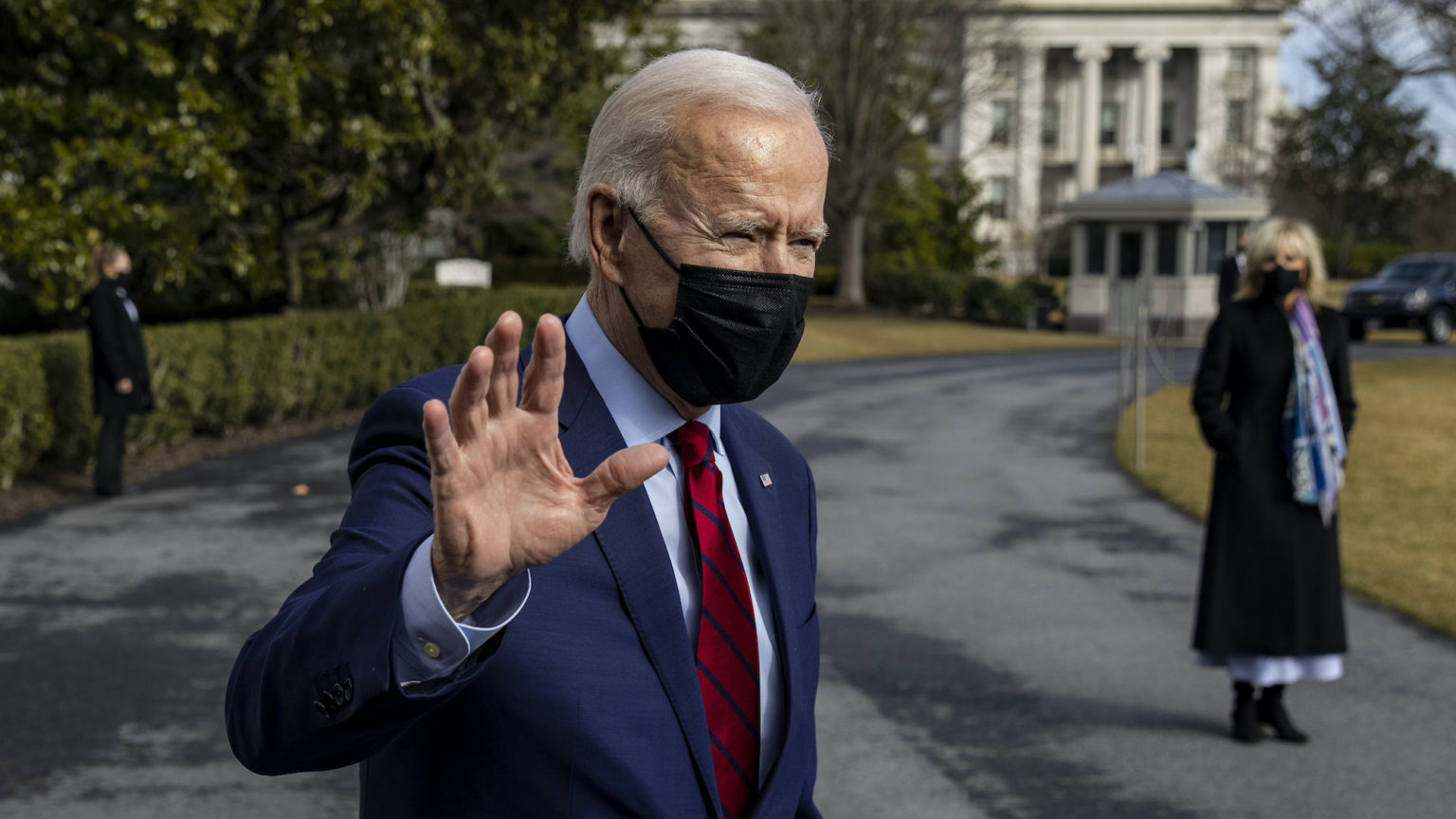 Is Joe Biden a Nazi? I only ask because he’s doing a lot of the same things that the previous incumbent of the White House did, and that guy was always being called a Nazi.

Remember when Donald Trump’s administration incarcerated kids who had illegally crossed the Mexican border? That was literally fascism. These children-packed detention centres were ‘concentration camps’, said Alexandria Ocasio-Cortez. Trump is taking the world ‘back to the 1930s’, said a breathless scribe at the Guardian.

Or how about when Trump dropped bombs on the Middle East? He was branded an insane warmonger. This is the imperial logic of his alt-right leanings, we were told. As for his administration’s targeting of Iranian forces – in particular Iran’s top military commander, Qasem Soleimani, killed by an American bomb in January last year – that was held up by some leftists and liberals as proof of just how deranged Trumpism had become. #WorldWar3 trended on Twitter. ‘Could tension between the US and Iran spark World War 3?’, asked one headline. Trump was always either embodying the evils of the Second World War or propelling humanity into a third.

As for his bully-boy tactics with the press – for journalists in particular this was technicolor evidence of his fascistic tendencies. Trump’s mockery of CNN and the New York Times – whom he frequently wrote off as ‘fake news’ – was straight out of 1930s Germany, apparently. (If someone can dig out footage of German journalists questioning and ridiculing the Fuhrer to his face in daily press conferences, I’d love to see that.) Trump’s war of words against ‘fake news’, his niggling desire to punish and censor the press for allegedly promoting ‘misinformation’, made him Literally Hitler. Hitler also used ‘the idea of the “Lügenpresse” (“fake news”) to attack journalists’, Yale prof Timothy Snyder solemnly informed us.

And now? Well now, Biden and some of his top advisers and supporters are doing all of the above – caging kids from Mexico, bombing the Middle East, demanding that the fake-news media be ‘reined in’ – but apparently it isn’t fascism anymore! It’s normal politics. It’s sensible policy. Isn’t that amazing – that policies can switch from being literally Nazism to being standard American government action depending on the name and party of the person signing them off?

Yes, the Biden administration really is doing all of the above. Unaccompanied youths who cross the border from Mexico are being incarcerated. Kids aged 13 to 17 are being banged up. Towards the end of February the Biden administration reopened detention centres for immigrant kids in both Texas and Florida. ‘Kids in cages?’, I hear you ask. Of course not. These are now youths in ‘overflow facilities’.

That’s the language being used. Out has gone CNN’s handwringing over ‘kids in cages’ and those staged photos of AOC weeping outside ‘concentration camps’ and those broadsheet editorials about how putting child migrants into camps has ‘echoes of the 1930s’, etc etc. Now all the talk is of ‘overflow facilities’ designed to ‘assist’ unaccompanied young arrivals. You couldn’t make this stuff up.

Democrat New York mayor Bill de Blasio described the Homestead facility in Florida as a ‘prison camp’ when the Trump administration was putting unaccompanied youths in there. He hasn’t said a word since the same facility was reopened by the Biden administration for the same purpose. It’s almost as if he doesn’t actually have any principles.

And don’t fall for the claims being made by self-styled fact-checkers – those modern-day monks who fancy that they are the guardians of the truth – who insist there is a massive difference between what Trump did at the border and what Biden is doing. The Trump administration separated kids from their parents, as well as incarcerating unaccompanied kids, whereas the Biden lot are only doing the latter, so shut up. That’s their message. This is so unconvincing. The unhinged, 1930s-exploiting fury over the Trump administration’s antics at the border was not only about family separations; it was also about the very act of incarcerating young people. It was about the ‘prison camps’ themselves, as de Blasio, AOC and thousands of weeping journalists referred to them. And now these same people are saying nothing, or are nodding along with the idea that it is fine to put children in ‘overflow facilities’. Those are the facts.

Last week Biden bombed Iranian-backed forces in Syria. At least 22 people were killed. World War 3? Nope. This was a nice military attack, one of those decent Democratic ones. ‘So different having military action under Biden’, said left-wing American author Amy Siskind. ‘No middle-school level threats on Twitter. Trust the competence of Biden and his team.’ Hey, American presidents, it’s fine to kill foreigners, just don’t write a childish tweet about it, okay? One of Ms Siskind’s online followers agreed. ‘Such a quiet attack’, she said. I’m guessing it was actually a pretty noisy attack for the scores of people killed and injured.

Even supposedly more radical people were soft on Biden after he dropped his first bombs. They didn’t take to the streets to denounce this evil president for potentially stoking up World War 3. No, they made memes saying, ‘You should be writing me a stimulus cheque, not bombing the Middle East’. The narcissism, hypocrisy and phoney anti-imperialism of the Trump-obsessed left summed up.

Then there’s the Biden lobby’s assault on ‘fake news’. They are literally doing this – waging a war of words against the lying press, or the Lügenpresse, one might say – and no one is kicking up a fuss. AOC says Congress must ‘rein in’ media outlets that ‘spew disinformation and misinformation’. That’s an overeducated person’s way of saying ‘fake news’. Last week two top Democrats – Anna Eshoo and Jerry McNerney – wrote to all the major cable companies demanding to know why they are hosting such filthy, lying news outlets as Fox News.

These people make Trump look like a rank amateur when it comes to reprimanding the press. Sure, he might have barked insults at CNN correspondents and tweeted abuse about the MSM. But some Democrats seem determined to cancel what they view as ‘fake news’, to have these alleged lowlifes taken off the airwaves. And yet – it’s getting predictable now, I know – there has been no pushback, no talk of the 1930s, no Timothy Snyder columns about Hitler. When Trump slams the ‘fake media’, it’s fascism; when Democrats do it, it’s fine.

This is the Orwellian duplicity of the world we live in now. Political language, Orwell said, can be twisted ‘to make lies sound truthful and murder respectable’. And so it is that ‘kids in cages’ are now ‘youths in overflow facilities’; and bombs are now ‘quiet’ and ‘competent’ rather than reckless and dangerous; and what was denounced as a fascistic attack on the free press when Trump was doing it is repackaged as a necessary ‘reining in’ of ‘misinformation’ now that Democrats are doing it. Reality is putty to the new elites, something they must mould to their own tastes and interests. Their self-serving dishonesty and self-aggrandising propaganda must not go unchallenged.

In answer to the question posed at the start of this article: no, of course Joe Biden is not a Nazi. But neither was Trump. Those of us who take a grown-up approach to politics know that it is wrong to brand everything as fascism. We also know it is wrong to abuse language and truth in order to depict yourselves as the good guys even when you’re doing exactly what the ‘bad guy’ did.