The tragedy of Egypt’s Arab Spring

A moment of democratic possibility was snuffed out before it had really begun. 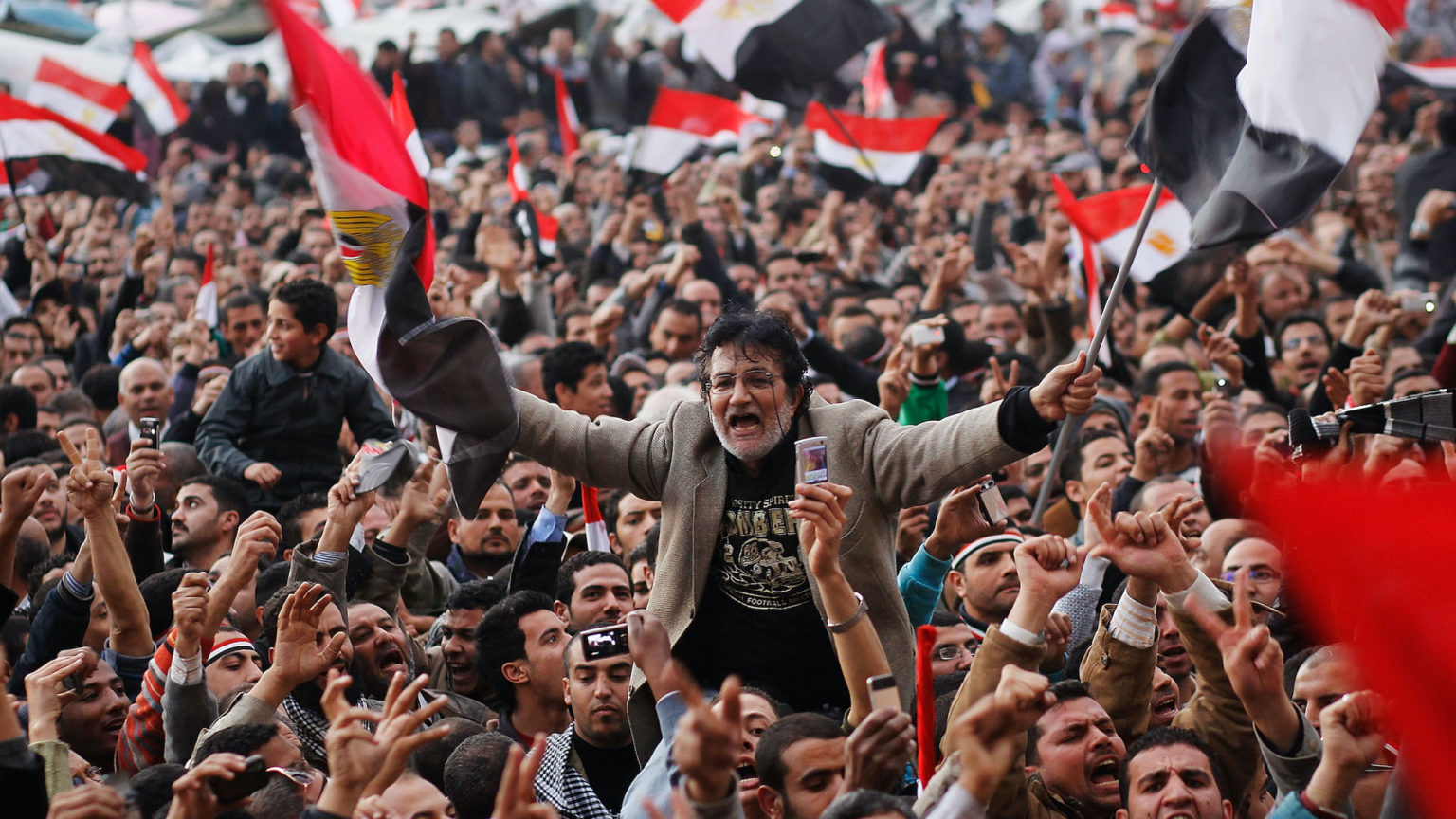 On 11 February 2011, after 18 days of protests, General Hosni Mubarak, Egypt’s dictator for three decades, was forced to step down. The thousands of people gathered in Tahrir Square, which had provided the focal point of Egypt’s Arab Spring, were jubilant. ‘The people want the fall of the regime’, they had chanted for days. And the regime – loathed for so long – looked to have finally fallen.

Ten years on, however, and the regime looks to be stronger than ever. Mubarak is long gone, of course. But in his place stands President Abdel Fattah el-Sisi. Like Mubarak, he’s a former army general. And like Mubarak he stands at the head of a large repressive state apparatus – one responsible for the detention and disappearance of an estimated 60,000 political prisoners, assorted massacres and the imposition of myriad oppressive measures, from ‘fake news’ laws to mass surveillance, all justified under an interminable ‘state of emergency’. As one former protester told CBS News, ‘I would have never imagined that, within 10 years, there would be less freedom in Egypt than under Mubarak’.

Even Tahrir Square, in many ways the symbolic centre of the Arab Spring, has now become a testament to its failure. ‘It looks like a military garrison manned by plainclothes police’, an activist tells Le Monde Diplomatique. ‘They outnumber the civilians. You can spot them by their appearance: moustaches and shiny shoes. The intimidation is constant.’

Egypt today, then, represents a grisly reversal of the promise of 10 years ago. Which raises questions: Why did the hopes for ‘Bread, Freedom, and Dignity’, as countless placards said a decade ago, turn to dust? What happened to those more concrete demands for fair elections, freedom of speech and assembly, and an end to authoritarian rule? Why, in short, did the Egyptian revolution culminate in the restoration and intensification of the military dictatorship?

There is no simple answer, of course. But there are several key factors.

First, the protests did not generate coherent political organisation and, with it, leadership. In part, this is understandable, given the decades-long determination of Mubarak to snuff out political dissent, banning some political opponents and scrubbing out others. But it was also a failure of the protest movement itself. The different factions – from the outlawed but tolerated Muslim Brotherhood and Egypt’s vibrant, powerful labour movement, to the youthful April 6 Movement and the broader liberal, secular middle classes – all played a significant role in Egypt’s Arab Spring. But they didn’t form workable alliances in those heady days. As the activist Wael Ghonim put it, it was ‘a revolution without a leader and without an organising body’.

While many in the West, especially around the Occupy movement which self-consciously drew on the Arab Spring, celebrated and fetishised this leaderlessness as progressive, in Egypt it proved a fatal impediment. Not least because it allowed the military itself to govern the transition from Mubarak to whatever was to come after.

And this is the second key factor in the failure of Egypt’s Arab Spring: the undiminished power and authority of the military. Indeed, in the months that followed the fall of Mubarak, as the ‘leaderless’ revolution floundered and its constituent parts fought among themselves, Egypt’s Supreme Council of the Armed Forces (SCAF) consolidated its control over political life. In its 2011 Constitutional Declaration, it reserved for itself the right, as one analyst put it, ‘to promulgate or object to legislation, to issue public policy for the state and the public budget, appoint members of the People’s Assembly, call and adjourn its sessions and sign international treaties and represent the Egyptian state abroad’. In other words, while Mubarak did fall, the actual regime did not.

Which leads us to the Muslim Brotherhood, and its political party Freedom and Justice. The perception certainly was that the Brotherhood was taking power in Egypt. It dominated the parliamentary elections in late 2011 and early 2012. And of course Mohammed Morsi, chairman of the Freedom and Justice Party, won the presidential election in June 2012, with 52 per cent of the vote. Yet appearances were deceptive, with Egypt’s military and bureaucracy still largely in the hands of the military. So, while the Muslim Brotherhood looked like it was taking power, it was never really holding the reins.

But what the Muslim Brotherhood’s political rise did do was to drive a wedge between the Islamist parts of Egypt’s Arab Spring, and the liberal, secular, middle-class and even elite parts, which proceeded to challenge the Muslim Brotherhood, both on the streets and increasingly in the courts. Without realising it, perhaps, the liberal, secular opposition to the Muslim Brotherhood, by appealing to the instruments of the state, empowered the state apparatus – in effect the military – against democracy. It certainly legitimised the military’s moves against Morsi. Indeed, by the time Morsi had begun his presidency in 2012, there was a considerable liberal constituency in Egypt actually harbouring hopes of the restoration of military power.

And this anti-democratic turn, born of revulsion towards the results of Egypt’s elections, was just as prominent among Western liberals and centrists, too. Indeed, having celebrated the fall of an obvious authoritarian like Mubarak, the sight of a majority of Egyptian voters choosing the illiberal, Islamist politics of the Muslim Brotherhood proved too much. For as we know only too well after Trump and Brexit, Western liberals like democracy, but only insofar as it delivers the ‘right’ results.

And so, from afar, they, too, supported those challenging the first democratically elected leader of Egypt. Consequently, when the military started openly challenging Morsi in 2013, many in Western elite circles saw it positively – as a rerun of the fall of Mubarak.

Except it wasn’t a rerun. It was to be the full-scale restoration of the old order.

This came to pass in July 2013, when Morsi was deposed in a coup d’etat led by General el-Sisi. A month later, the Egyptian security forces mopped up what was left of open resistance to the coup, massacring between 900 and 1,000 Morsi supporters in Rab’a al-Adawiya square.

And this brings us to the role of the Western powers in the crushing of the Arab Spring. For they could clearly see a brutal coup d’etat taking place. And they effectively cheered it on, aided and abetted by a media class which refused at points even to call it a coup d’etat.

The US secretary of state, John Kerry, was the most brazen of the coup backers. He said Sisi was ‘restoring democracy’. The EU’s representative for foreign affairs, Baroness Ashton, ran Kerry close in the Newspeak stakes, when she proceeded to praise the military for continuing Egypt’s ‘journey [towards] a stable, prosperous and democratic Egypt’. The key word here was ‘stable’. That is what the West wanted of Egypt. Not a volatile democracy, but a stable regional ally, willing to work with Western powers in their mutual interest, be it stemming migration flows into the EU in return for billions of euros, or maintaining a regional balance of power.

Western states were not exactly complicit in the coup, but they clearly welcomed and endorsed it. As Amr Darrag, a former Egyptian minister, put it recently, ‘their support for Sisi, then and now, is one of the principal reasons for the endurance of his regime’.

Indeed, if the absence of political leadership, the persistence of military power, and the liberal turn against the Muslim Brotherhood did so much domestically to shut down Egypt’s Arab Spring, these factors were compounded internationally by Western powers’ privileging of ‘stability’ over democracy – a privileging that has gone a long way to turning Sisi’s regime into one that outstrips even Mubarak’s in its ruthlessness and barbarity.

Yet for all this, what happened 10 years ago can’t be undone. It can’t simply be erased – despite Sisi’s best efforts. For a brief moment, Egyptians’ dreams of democracy and freedom seemed on the brink of realisation. And those dreams do persist. ‘The younger generations saw what happened’, a Cairo-based mechanic and one-time protester told the New York Times last week. ‘It’s like a shark when they smell blood. Freedom is like this. We smelled it once, so we’ll keep trying.’