Get the troops out of DC

Biden’s war on ‘domestic terror’ is wildly disproportionate and authoritarian. 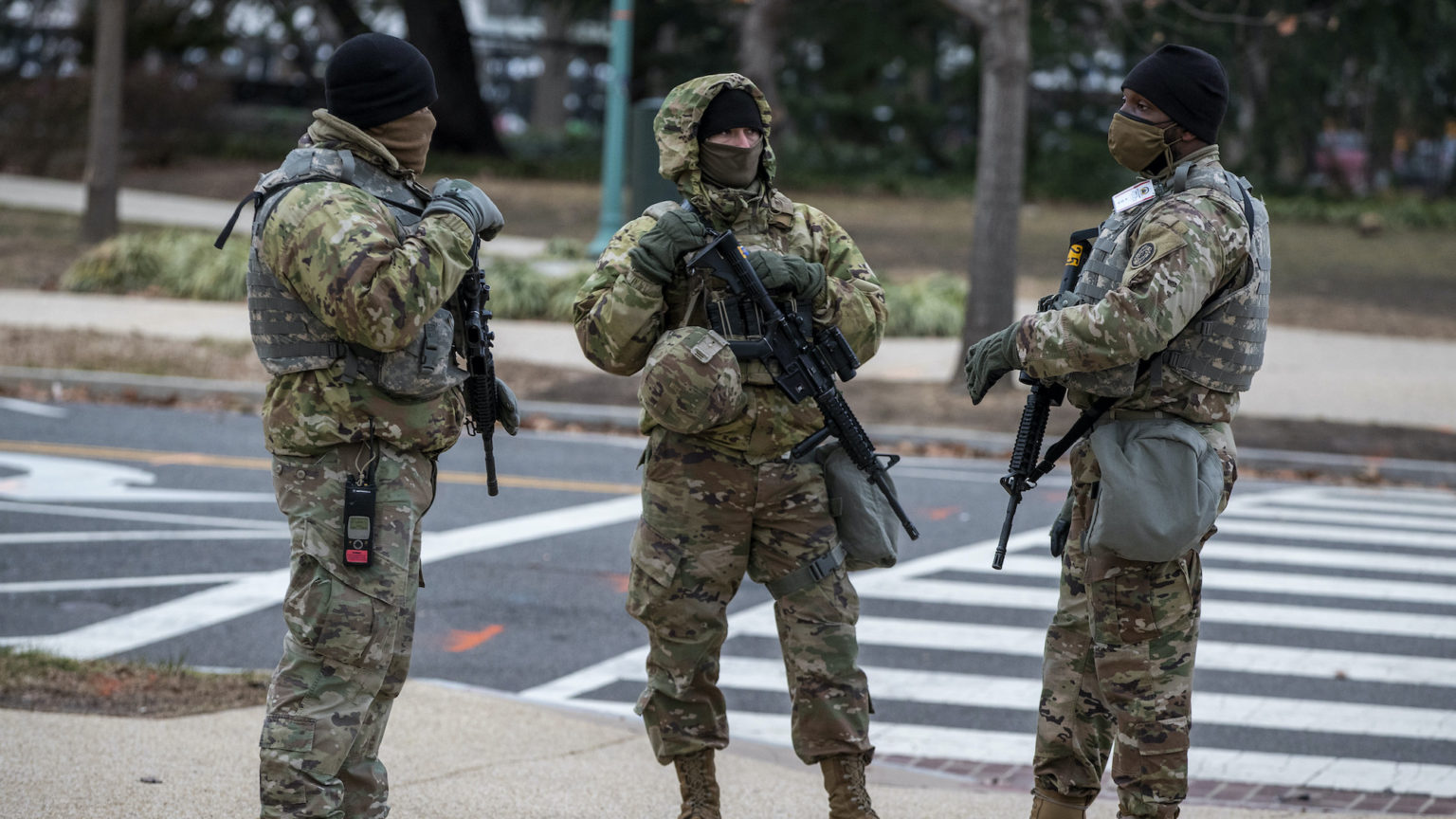 The US Department of Homeland Security (DHS) issued a national terrorism bulletin yesterday, warning that extremists ‘may be emboldened’ by the 6 January riot at the Capitol to ‘incite or commit violence’. This alert came the day after reports that the 7,000 National Guard currently on duty in Washington, DC will remain until ‘at least’ the end of March.

Just consider how extraordinary these measures are. This is the first-ever DHS terrorism bulletin that targets domestic American citizens. The Biden administration is saying that the attack on the Capital was not simply a riot but an act of terrorism. For the first time, they are publicly announcing that far-right organisations and Trump supporters should be labelled terrorists on a par with al-Qaeda or the Islamic State.

The militarisation of the nation’s capital is also remarkable – and worrying. Federal call-ups of the National Guard are rare, having been used only 16 times since the founding. Such deployments have typically sought to quell specific, ongoing riots, such as those in Detroit in 1967 or the riots that followed the Rodney King beating in Los Angeles in 1992. But there is no such violence in DC at the moment, nor any imminent threat of it. Some 26,000 National Guard were deployed in advance of Joe Biden’s inauguration last week, based on hyped-up reports of a ‘heightened threat environment’ in DC and state capitals. But in the event nothing much happened (the only notable attack was Antifa smashing up windows of the Democratic Party offices in Portland).

To go to such lengths – to issue a warning to the public about terrorism in its midst, and to maintain thousands of troops in the nation’s capital – would seem to require a compelling rationale, like a significant and impending threat of violence. But not now. The DHS’s bulletin admits they lack evidence of a ‘specific, credible plot’. Likewise, deploying the National Guard in DC has not been explained by reference to any immediate danger. Politico reports that law-enforcement agencies are ‘preparing for potential unrest in the coming days and weeks, as former President Donald Trump’s impeachment trial kicks off and his supporters issue threats to lawmakers’. The Associated Press says a US official told it that federal law-enforcement officials are examining ‘ominous chatter’ about attacking or killing legislators. But ‘potential unrest’ during an impeachment trial and internet ‘chatter’ are hardly the basis for having thousands of military patrol the streets. What we’re witnessing in DC now is highly unusual: the use of the National Guard on a pre-emptive basis, for an unspecified length of time.

The massing of troops in DC is disproportionate. Thousands of military were not even needed to stop the Capitol riot, where a hundred or so additional police would have sufficed (the acting head of the DC Capitol police has admitted they were unprepared). In a democracy, the deployment of the military in domestic affairs should be a last resort, used against an immediate and major threat. That’s not the case here in DC or across the country now.

Biden and the Democrats’ double standards when it comes to rioting and the use of federal force is head-spinning. Many of the summer’s Black Lives Matter protests descended into violence, with some dozens killed and billions of dollars of damage, often to minority neighborhoods and shops. Democrats did not describe this as ‘terrorism’. In fact, they pretended it wasn’t happening: attendees at the Democratic Party National Convention in August did not mention the arson and looting, never mind condemn it.

When Trump sent federal officers to Portland in July to defend a federal courthouse under attack from Antifa and others, it was denounced as fascism. Democrat mayors called the use of federal forces an ‘abuse of power’. ‘Unilaterally deploying these paramilitary-type forces into our cities is wholly inconsistent with our system of democracy and our most basic values’, they said.

Back in June, a big media storm broke out over Republican Senator Tom Cotton’s op-ed for the New York Times, which argued for the deployment of federal troops to restore order after the riots. This led to a meltdown among outraged Times staffers and the dismissal of an editor for running the piece. But now this is all forgotten, as the National Guard is simply part of Biden’s desire to bring ‘unity’. Apparently, there are ‘good’ rioters who don’t deserve the National Guard treatment, and ‘bad’ rioters (Trump supporters) who do.

The militarisation of the Capitol comes complete with tall fences, razor wire and gun-toting troops, and has been given the name ‘Green Zone’, harkening back to the Iraq War. Along with publishing terror warnings, this is more of a propaganda exercise than it is about providing security protection. Even if right-wing extremists set off attacks in the future (which, of course, cannot be ruled out), the current military mobilisation – which is the kind you would undertake if you were engaged in warfare – is simply overkill and not reasonable for the scale of threat. This show of force is more about Biden and his allies sending a message, especially during the impeachment proceedings: do not forget how violent and uniquely bad Trump supporters are.

After just a week in the White House, it is becoming clear that the Biden team is whipping fear and panic in the name of starting a new war on terror – this time on ‘domestic terrorism’. That’s the new buzzword. In his inauguration speech, Biden warned of the ‘rise of political extremism, white supremacy, domestic terrorism’, which he said ‘we must confront and we will defeat’. Biden plans to introduce a new a law against domestic terrorism, and has been ‘urged to create a White House post overseeing the fight against ideologically inspired violent extremists’.

Some are explicitly calling for the type of expanded powers given to government agencies following the 9/11 attack, such as the Patriot Act, but now applied to American citizens. House speaker Nancy Pelosi has called for a ‘9/11-type commission’, and Democrat senator Chuck Schumer has said the Capitol rioters should be placed on a no-fly list. This new war on domestic terror, if pursued, is likely to be as abusive of civil liberties as the foreign one.

Supporters of new domestic-terrorism laws claim the current law is insufficient. A former FBI agent says Congress needs to ‘close gaps in the law’, to make ‘investigative techniques, group designations and stricter sentences’ available to law enforcement. But there are already plenty of severe legal offences that rioters can be charged with. These calls for a new domestic-terrorism law are really an attempt to grab new powers, such as surveillance without a warrant.

Such new powers would be a serious risk to civil liberties, including freedom of speech and freedom of assembly. Already, zealots who want to make war on ‘domestic terrorism’ are making clear that they want to cast a net over a wide swathe of the population. In a recent interview, former CIA director John Brennan said Biden officials are ‘moving in a laser-like fashion’ to combat an ‘unholy alliance’ of ‘religious extremists, authoritarians, fascists, bigots, racists, nativists, even libertarians’. As former Democrat representative Tulsi Gabbard put it, this approach would represent ‘a targeting of almost half the country’. By Brennan’s criteria, mass surveillance could include ‘anyone who loves freedom, liberty, maybe has an American flag outside their house, or people who attended a Trump rally’, she said.

The Capitol should be open to the public; it shouldn’t be a military-patrolled ‘Green Zone’. Openness implies a basic level of trust in the American people, and was common sense until a few days ago. But the political class doesn’t have that trust anymore. As Congressman Tim Ryan asked recently, ‘Who in our government and our military have had experience around crowd control, maybe even Special Operations Forces in Iraq and Afghanistan?’. Ryan and his fellow Democrats now view Americans as akin to a foreign threat, as a population that needs to be controlled.

Having troops on the streets of DC is not justified, and we shouldn’t let it become normalised. They need to be removed immediately. And more to the point, we need to oppose the entire new war on domestic terrorism. You may fear the Proud Boys, or maybe you’re against Antifa – but either way, you can be sure that any new laws will threaten the rights of a much wider group of people than those nutjobs.

Here’s a bulletin for you: Biden’s new war on domestic terrorism will be extremely authoritarian, undemocratic and divisive. We have specific and credible evidence that the new administration has been emboldened by the 6 January Capitol riots. Please be vigilant.