We need to be braver

Standing up to woke intolerance isn’t easy. But we must do it. 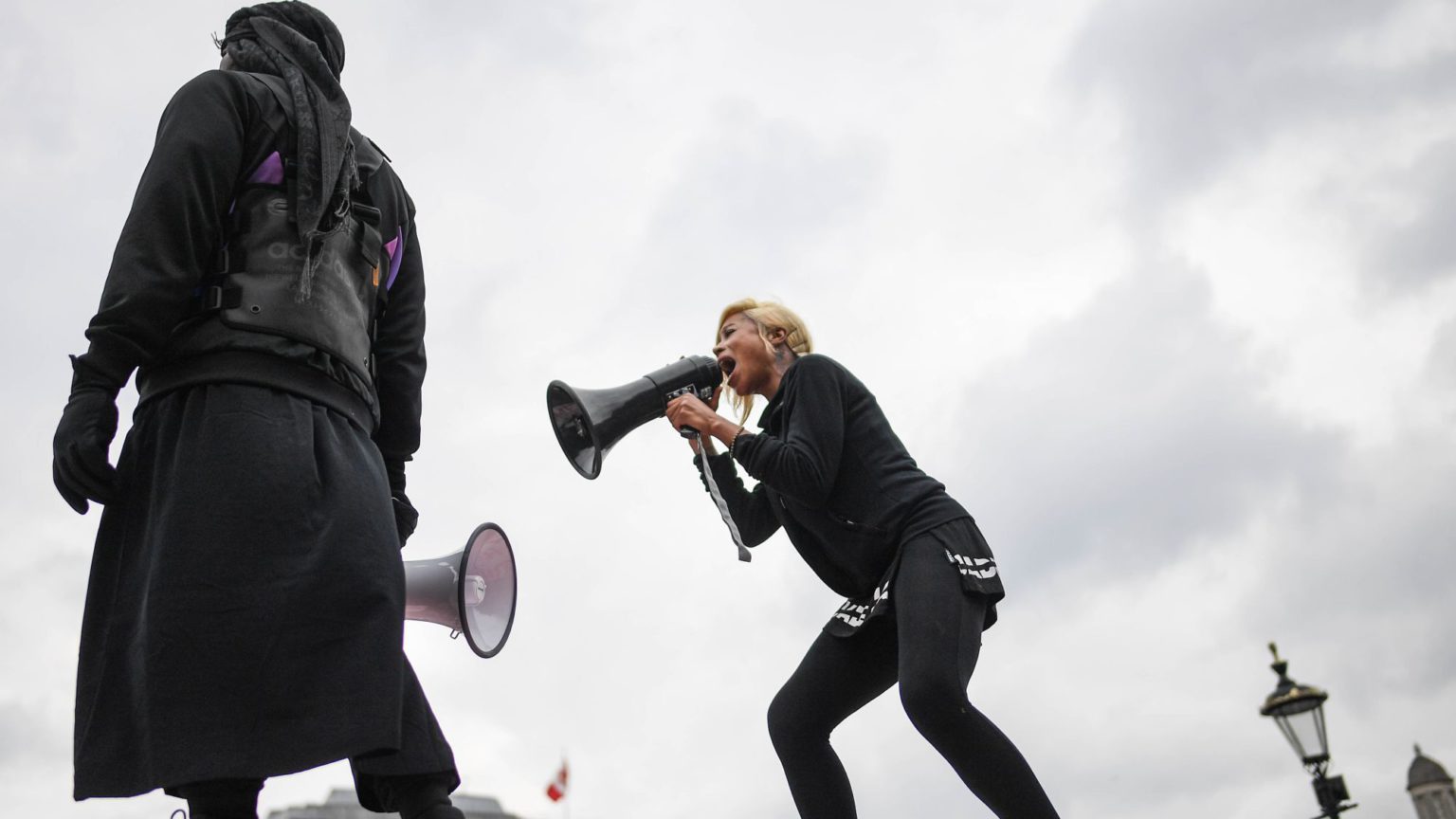 During a recent conversation about groupthink in the arts, a playwright friend of mine told me about his experience last year of rehearsing his latest drama. A director had been enlisted to take charge, and from the outset was determined to impose his ideological values on to the production. Before long he was cutting lines that he considered ‘problematic’, and policing how these topics were discussed in rehearsal. The characters as portrayed in the script were morally ambiguous but, to the frustration of the writer, this director was adamant that the show must convey the ‘correct’ message. For him, theatre was simply another tool to spread the word of social justice.

Anyone who works in the arts will be aware of the deleterious impact that woke politics has had on creative freedom, although few will be bold enough to admit it publicly. That this director was enjoying his power was obvious, and I did suggest to my friend that perhaps a more open-minded practitioner might have improved the process. ‘That’s the trouble’, he said to me, ‘we couldn’t find one’. By the time the production’s run had started, my friend was struck by a terrible realisation. He had been treating this director as one might a dangerous dog: overly anxious not to cause him any displeasure, and always aware that he could lash out and bite at any moment.

If you have ever had dealings with identity-obsessed ideologues, this analogy will doubtless ring true. The rapid advance of the identitarian worldview in mainstream cultural, educational and political institutions, most notably via critical race theory and LGBTQIA+ activism, has been accelerated by one factor above all: intimidation. According to surveys by social scientists, the percentage of American citizens who are afraid to express their political views openly has tripled since the McCarthy era. As I have argued previously on spiked, it is self-censorship rather than state censorship that represents the most direct threat to the intellectual health of contemporary society. This is what John Stuart Mill meant when he wrote about the ‘despotism of custom’ and ‘the tyranny of the prevailing opinion and feeling’.

Ultimately, however, self-censorship is a choice, even at a time when speaking out can have ruinous personal consequences. If we allow ourselves to be intimidated into silence, there is little hope that the regressive effects of identitarian activism will be curbed. The Salem witch trials of 1692 only came to an end after the wife of the governor of the colony was implicated, and a sufficient number of villagers felt brave enough to express their doubts about the accusers. Today there are powerful ideologues who seek to foster division and undermine our liberal values in the name of social justice, and we can be sure they won’t back down while the majority remain silent. As Arthur Miller puts it in The Crucible (his dramatisation of the hysteria in Salem), ‘the little crazy children are jangling the keys of the kingdom’, safe in the knowledge that those who cross them will be the next to be condemned.

Our new culture of conformity is spreading, and its impact is being felt in all walks of life. Recently, an actor friend of mine was contacted by her agency because she had not posted anything on social media in support of the Black Lives Matter movement. She was told that she must do so immediately if she wanted casting directors to consider her for any future roles. I am hearing stories like this every day, but invariably they are communicated privately. There is a strong general feeling that to publicly object to the prevailing dogma is to jeopardise one’s livelihood and reputation.

This is the sad reality of most present-day working environments, where to utter an unfashionable opinion, to misspeak, or even to fail to show due fealty to received wisdom can be an impediment to future career prospects. As a former teacher, I am still in contact with ex-colleagues who are troubled by the sudden revisions made to curricula and pastoral policies. Under the misleading banner of ‘anti-racism’, the reactionary tenets of critical race theory are being foisted upon schools across the UK. Important struggles against genuine racism are being undermined by influential activists who insist that we live in an irredeemably white-supremacist culture. Highly contested notions such as ‘whiteness’, ‘white privilege’ and ‘white fragility’ are being treated as the gospel truth, not just at schools but throughout the public and private sectors. Many companies are forcing their employees to undergo ‘unconscious bias’ training, even though there is overwhelming evidence that such schemes are unreliable and ineffective. To raise a complaint is taken as proof of the kind of prejudice that the tests seek to expose. After all, only a witch would deny the existence of witchcraft.

It is a great irony that the strategy of smearing people as racist without cause is only successful because we live in a country that no longer considers racism in any way socially acceptable. Even the allegation is enough to make the accused unemployable. In other words, the claim that ours is an endemically racist society is fatally undermined by the very tactics that its proponents deploy. Bizarrely, the response to this reality from many leftist identitarians has been simply to deny the existence of what has become known as ‘cancel culture’. Yet we have all seen numerous examples of people who have been hounded out of their jobs for causing offence, either through misjudged jokes or ‘problematic’ views.

When a group of well-known figures – including Salman Rushdie, Noam Chomsky and Margaret Atwood – published an open letter in Harper’s Magazine decrying this new climate of intolerance, the backlash was intense. The relative privilege of the signatories was held up as evidence that cancel culture is a myth, and that these rich celebrities were simply worried about being held accountable for their views. This, of course, is to miss the point spectacularly; it was precisely their financial security that enabled them to sign the letter in the first place. As Tom Slater has pointed out, cancel culture is a phenomenon that most greatly impacts on ordinary working people. It only takes a few highly publicised instances of ‘cancellation’ to create the kind of atmosphere in which the public is intimidated into toeing the line.

As the social-justice ideology gains momentum, it will become increasingly apparent that to ignore it will only guarantee its dominance over our lives. Its advocates will continue to deny biological reality and threaten you if you will not acquiesce. They will tell you that the kind of colour-blindness advanced by Martin Luther King is a form of racism, rather than a beautiful ideal. They will bully people in the name of compassion, promote division and call it progressive, and rehabilitate a new form of racism under the guise of tolerance. They will insist that you accept their nebulous theories as fact, and couch their incoherent ideas in jargon and obfuscation. They will use inflammatory language to misrepresent your concerns, accuse you of ‘erasing’ people’s existence, or committing acts of ‘violence’ through speech. They will claim that there is no such thing as objective truth, but demand that you acknowledge the truth of their ‘lived experience’. They will carry on feeding the far right by elevating identity politics, and claim to be opposing fascism through their authoritarian methods. And if you dare to suggest that any of their demands should be subject to discussion or debate, they will not hesitate to brand you a bigot.

When this happens, it is our responsibility to take a stand. We should defend those who are the targets of bullying campaigns, whether they are being attacked for what they have said or what they refuse to say. We should not abandon the liberal values that still function as our best defence against racism and other forms of intolerance. We should not allow ourselves to be intimidated by threats, insults and false accusations. The desire for a quiet life is entirely understandable, but surely we have reached the point where the keys of the kingdom must be wrenched back from the hands of the crazy children.