The BBC should drop the faux impartiality

The bias of broadcasters is plain to see. It is dishonest for them to pretend otherwise. 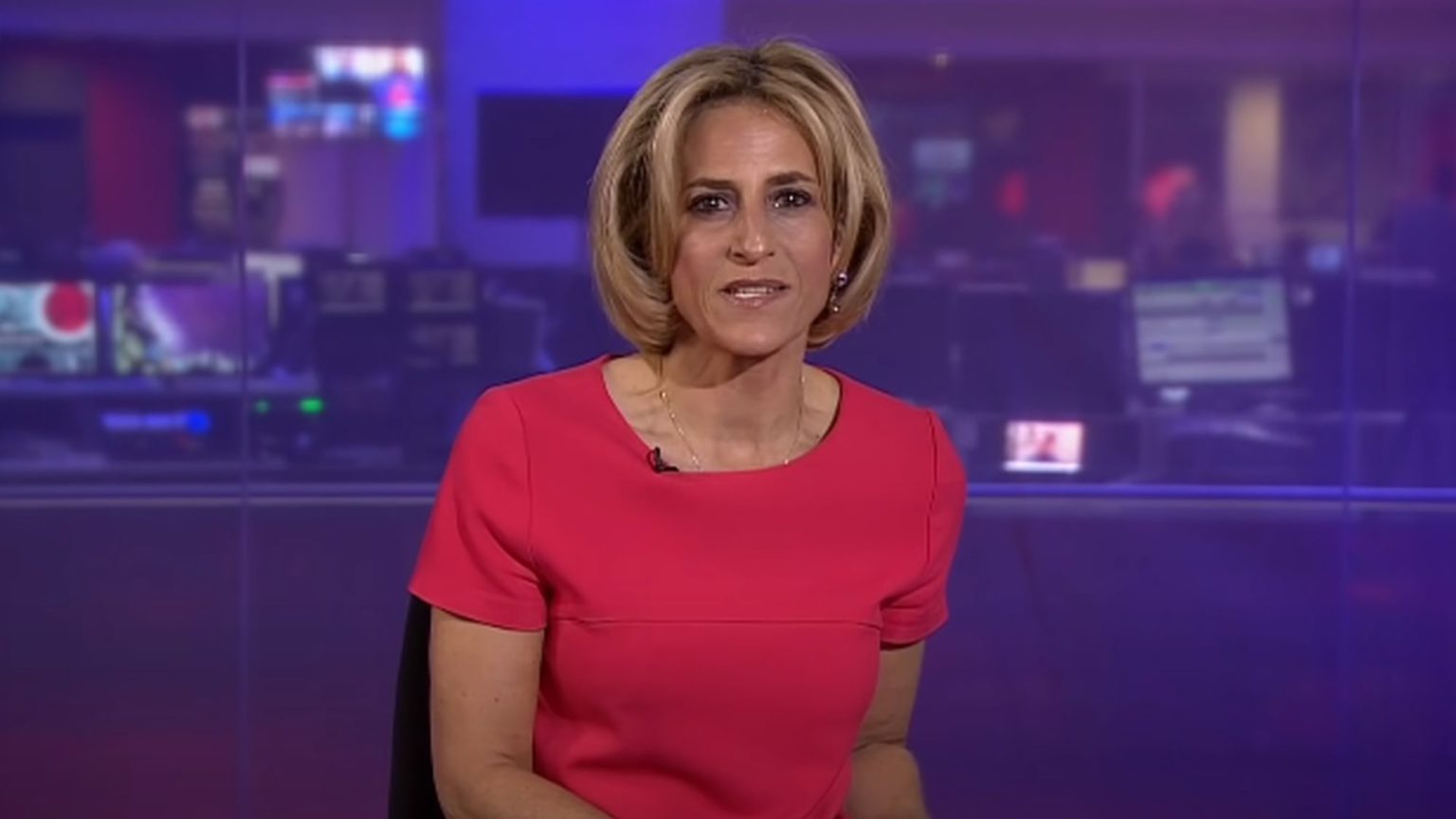 Another day and another impartiality and balance controversy at the BBC. One controversy at the weekend was over a reporter’s claim that a police officer at the Black Lives matter demo ‘knocked herself off her horse’. The BBC reported the clashes as ‘largely peaceful’ despite 27 police officers sustaining injuries, leading to accusations that it had played down the clashes. Conservative minister Kemi Badenoch has even accused the BBC of ‘fanning the flames racial division’ with its coverage of the protests.

Last week, Newsnight stirred the pot again by presenting some questionable coronavirus numbers. It followed presenter Emily Maitlis’s display of overt bias when she presented an opinion on Dominic Cummings as fact while claiming ‘impartiality’. This rightly provoked a backlash. She overstepped an invisible line, the BBC said, in a rare and rapid admission of error.

But her misstep was one of many. The endless war that Ofcom and the BBC are fighting to suppress all bias in broadcast news is futile. It leads only to dishonest reporters and distrustful viewers. Bias permeates all news reports. It always has, it always will. Now that alternative media are so freely available online, people are seeing through the bias and running out of patience with fake claims of ‘impartiality’ on TV.

Many older broadcasters are dismayed by this new vogue for editorialising. Alastair Stewart, former ITV News presenter, criticised Maitlis and defended the ideal of broadcast impartiality. ‘An impartial broadcast media is one of the pillars of a pluralist, democratic society; so, too, is a newspaper industry which offers readers a daily reassurance of their prejudices – left, right and pretty well everything between’, he argued.

But why is this arbitrary division desirable? And is it even enforceable anymore? The distinction our regulators draw between papers and broadcasters – allowing the first to be biased and bombastic and forcing the other to be bland and ostensibly ‘impartial’ – is unjustified and outdated. It is rooted in the snobbish view that the masses are more likely to be whipped up by exciting moving images on a screen than by the written word. The division is also increasingly meaningless as papers run video content online and broadcasters like Sky upload much of their content to YouTube. There is no longer a clear line between these two types of media.

Broadcast news bulletins, like papers, can only have one lead story. And the simple decision of what to make the lead story – what news to present as most important – says a huge amount about the lens through which that broadcaster sees and understands the world. If a BBC editor chooses to splash on a new report on the gender-pay gap instead of a migrant boat landing in Dover on the same day, it says something about what they believe, fear and value, even if they quote opposing views within the report.

I recently had Sky News on all day, mainly for company in my home office. One giveaway is the reporters’ choice of language. The disturbances in America were ‘peaceful protests’. You could also hear the naked disdain in Adam Boulton’s voice when speaking about Donald Trump.

Words and tone are subjective, and it is possible that they can be perceived differently. What can be more objectively judged, however, is what editors do and do not choose to report. Sky focused on the police’s heavy-handed use of tear gas in Washington, DC and on critics of the president, who were unimpressed with his vanity visit to a damaged church. In the rolling package, which occupied most of the day, there was little mention of the riots, looting and evening killings in other cities. The focus, in my biased eyes at least, was clearly on the actions of authorities, not the rioters. Were it not for all the breaking news articles I was reading online, I might have believed that what happened in DC was indeed the primary event of the day.

The following night, BBC News ran a long segment on slavery and historic injustice in the US before showing friendly interviews with families attending a Black Lives Matter protest in London’s Hyde Park. They created a narrative. Meanwhile, the clashes in Whitehall, which I had just watched play out on Twitter, vividly and in real-time, got a short mention at the end of a report, described as ‘disturbances’.

Every segment is gently caressed, intentionally or not, with the biases of the producer or reporter, even when it is presented by the most robotic BBC talking head. We can’t blame them for this. Everyone has values, knowledge systems and mechanisms for understanding the world, and these have to be called on when reporting on the world.

There is no objective reality in the complex world of social interactions, human emotion, politics, economics and even science. As we are finding out during the coronavirus crisis, not even science is absolute. It is often an ‘approximation to the truth’, as the philosopher of science Karl Popper once called it. Any organisation claiming to know where the correct balance of views is on every subject which makes it into the news is telling a tall tale.

And as broadcast reporters so routinely fail to meet the impossible goal of impartiality, while insisting to the contrary, they inadvertently imply that the views conveyed in their reports must be the right ones. This angers viewers who disagree, while rousing those who back the view – witness, for instance, how Dominic Cummings’ critics rose up to defend Maitlis. This exhausting, almost daily process of a biased report provoking a critical backlash online, before a backlash to the backlash forms, is unhealthy. It always ends in accusations of bad-faith reporting, which deepens mistrust journalism.

Sometimes, it seems like the BBC is caught in a perpetual impartiality crisis. The BBC, understandably, comes under far more scrutiny than most because it is funded by the public, under the threat of state violence. Corbynites became convinced the Beeb was whipping up claims of anti-Semitism, Scottish nationalists thought Auntie was pro-Union, and the Conservative government is convinced it is anti-Tory. The BBC welcomes the fact that it receives criticism from different sides as this can be held up as ‘proof’ of its impartiality. But really this is a sign of abject failure. Essentially, the BBC manages to anger almost everyone apart from the soft liberal-left.

The alternative to enforced impartiality is to allow broadcasters to campaign, preach and deliver monologues as they wish. Critics say this will coarsen debate and will lead to a media landscape dominated by conservative ‘shock jocks’ and liberal crusaders, like in the US. But right now, I cannot see how public debate can get much coarser. Sure, strong views are more readily heard on screen in the US, but at least they are honestly held views. Our culture of faux impartiality is breeding an extra layer of dishonesty.

Online output is already dominated by partisan but passionate voices. Drawing a sharp line between podcasts and radio, online shows and TV shows, and webcasts and broadcasts is pointless. There is nothing special or uniquely powerful about a newsreader at a major broadcaster. Alastair Stewart at ITV or Emily Maitlis on the BBC are no more likely to spark civil unrest if they give their views on air than a popular YouTube star (who will often have many more viewers). To argue that ‘an impartial broadcast media is one of the pillars of a pluralist, democratic society’ is to assign a select few legacy media brands a special power which they no longer have.

As the power of old media wanes, the era of faux impartiality should also come to a close. The rise of social-media censorship aside, a more diverse online media landscape is hopefully emerging, where all voices, ranting or otherwise, are represented and viewers are treated as adults, able to deal with different viewpoints.