The lockdown has done untold damage to this country

Democracy, liberty and wealth have been decimated by this hysterical policy. 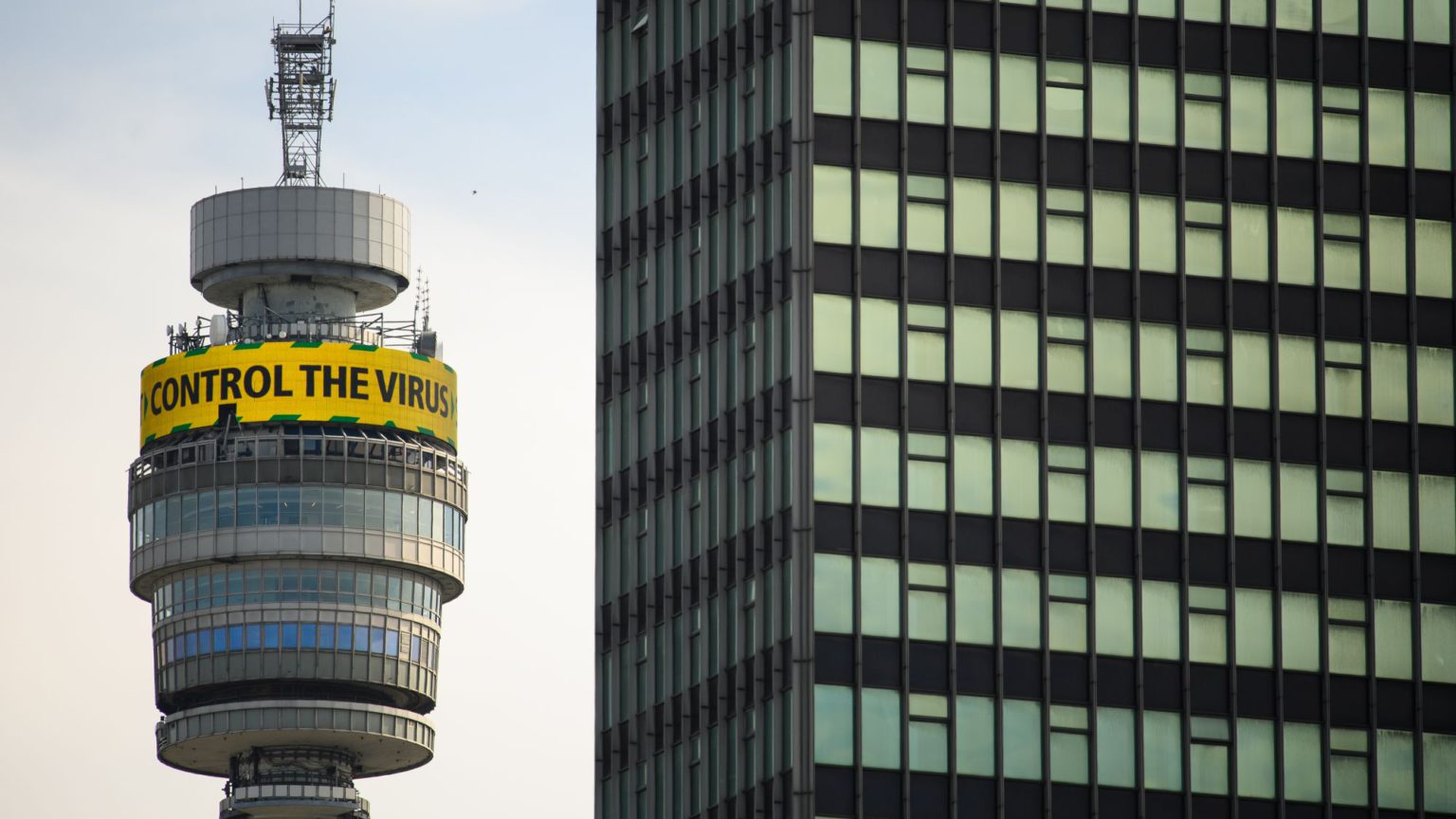 Covid Britain feels like a one-party state. Normal political life has been suspended. Political protest and industrial action have been banned. Even small gatherings that question the ruling ideology of this strange new nation – the ideology of lockdown – are violently broken up. Witness the police brutality that was visited upon lockdown sceptics in Hyde Park a few days ago. You dissent at your peril.

The role of the citizen in the Covid dystopia is to applaud the state, not question it. Every Thursday night, on your doorsteps or your balconies, you must clap for the benevolent state and its gracious health service. Big Brother loves you and you must love it back. Vast propaganda billboards remind us of this duty. From Wembley Stadium to motorway hoardings to the front windows of the most respectable citizens’ houses, the same three words loom, like an omnipresent reminder to the masses of the only opinion you’re allowed to hold in Covid Britain: ‘Thank you NHS.’

The despotic instinct runs riot. We have seen police officers telling people to get out of their own front gardens, to stop walking in the Peak District, to get off park benches and return to their house arrest. Snitching is the only thriving business. By the end of April, British police forces had received 214,000 calls from Covid Britain’s willing army of spies. ‘Always the eyes watching you’, as Winston Smith put it.

New rituals ensure order and obedience. A face mask, like a burqa in Afghanistan, signifies your fealty to the new religion: social distancing. ‘Stay two metres apart’, the relentless propaganda instructs, even though the medical benefits of such distance are far from clear. People do the awkward pavement dance to avoid getting too close to passing strangers, and take their place in long, silent, fractured queues outside supermarkets, keen not to displease any lockdown fanatic who might be watching.

Not only is work strictly regulated in this one-ideology nation – so is play. There will be no hugging of people from outside your household until autumn at the earliest, says Matt Hancock, the secretary of state for human touch. A survey found that some people (possibly as high as one in five) are breaking lockdown to have sexual intercourse. Sex is an illicit activity in Covid Britain, as in Nineteen Eighty-Four. Hancock is our one-man Junior Anti-Sex League keeping a watchful eye over citizens and their wandering hands. In Orwell’s dystopia, ‘the sexual act, successfully performed, was rebellion’. Same here. Just ask Neil Ferguson. He lost his job for having sex (when it should have been for his dodgy models).

Public debate has disintegrated. Do not for one minute be fooled by the noisy media discussions of the government’s failures or the pantomime yelling matches between TV presenters like Piers Morgan and some hapless minister. All of this takes place within the lockdown ideology. The only ‘dissenting’ view you may hold in Covid Britain is that the lockdown didn’t come early enough / wasn’t severe enough / is being eased too early. The media-government spats over the Covid crisis are the narcissism of small differences. The very shrillness of these discussions is an indicator that what we have here are groups devoted to the same cause – locking down the country – but who differ over how successfully the cause has been implemented. Hell hath no fury like fanatics bickering over details.

It’s the same in politics. Every clash and row takes place within the parameters of acceptable thought. Genuinely demurring voices are notable by their absence. Lockdown scepticism is staggeringly absent. Jacob Rees-Mogg is right to say that MPs must get off their Zoom calls and physically return to the Commons. But it isn’t their physical absence that’s the problem – it’s their intellectual absence. Where are the voices for reason and liberty and a return to work and production? The speed and thoroughness with which our allegedly conflictual political system was bent to a singular, myopic cause raises profound questions about the health of our democracy.

In lockdown Britain, there’s one way to think and one way to behave. You must accept the lockdown or risk being demonised as a hateful individual and possibly being beaten by the police. You must mask your face, keep your distance, foreswear sex, go shopping, go home again. Question nothing. Eat your meals, get your exercise, watch the news, go to bed. And await deliverance by officialdom. Although deliverance will be into a ‘new normal’, we are now chillingly told, in which the low-carbon, socially distanced, populace-managing dreams of the technocratic elite will finally become a real-world nightmare.

‘But it is all necessary’, the lockdowners cry. This was questionable from the very start of the lockdown. Now it is utterly untenable. The lockdown was justified as a temporary measure to ensure that the NHS was not pushed to breaking point by the hundreds of thousands of Covid cases that the ideologues of doom predicted. The cases never came. Many hospitals are half-empty. The lockdown’s justification has evaporated.

And yet it continues. And it’s easy to see why. It’s because lockdown has become a political, ideological cause, not a medical one, on to which so many of the elite’s prejudices – about the harmfulness of economic growth, the undesirability of mass society, the unimportance of liberty, the need for mass compliance to expert advice – have been projected. The lockdown is now separate from the pandemic. It has its own logic. It is the ruling ideology of our age. That is why Covid-related reason – whether one is pointing out that the models were wrong or that cases in London have plummeted – is proving such a feeble tool. Because the lockdown is no longer really about Covid.

How has the subjugation of democracy, liberty, daily life and reason to Covid hysteria been so successful? Through terror. It is not an exaggeration to say that the government launched a campaign of terror against the populace. Government adviser Professor Robert Dingwall is right to say that officials have ‘effectively terrorised’ people into believing that coronavirus will kill them. We have been incited to fear not only a disease, but each other. Misanthropy is the fuel of the lockdown ideology. Steer clear of people. Do not touch them. Do not sit next to them. They might be diseased. And you might be diseased. That baleful instruction, now rescinded, to ‘Stay Home’ and ‘Save Lives’ made it clear: you are dangerous, and if you go outside you could kill people. The purest form of the culture of fear.

Polls show that many people are now reluctant to go back to normal life. Many want schools to remain closed. There is fear about returning to work. Things are so bad that the government is having to redirect its resources, away from terrorising us to stay indoors towards trying to coax us to come out again. It is reported that Boris Johnson recently joked with his colleagues, saying: ‘I’ve learnt that it is much easier to take people’s freedoms away than give them back.’ That isn’t funny. The use of terror to cow much of the public, decimate economic life and suspend everyday liberty is not a joking matter. Terror has consequences, especially in a situation where any form of meaningful dissent from the terror was demonised and even criminalised.

How do we get out of this? With truth and reason. With facts about the virus, not hysteria. With clear information about the very small risk that Covid poses to the vast majority of us. And with a renewed commitment to freedom and democracy and to the thing that makes those things possible: the treatment of citizens as adults to be engaged with, not miscreant children to be terrorised into changing their behaviour. For the sake of liberty and the economy, the lockdown must end. But that isn’t enough. After that we need a reckoning with the ideology of the lockdown, and with the pre-Covid prejudices, elitism and hysteria that are its fuel.