The Syrian crisis can’t be solved by the West

International intervention created the unfolding catastrophe in Idlib. It's not going to solve it. 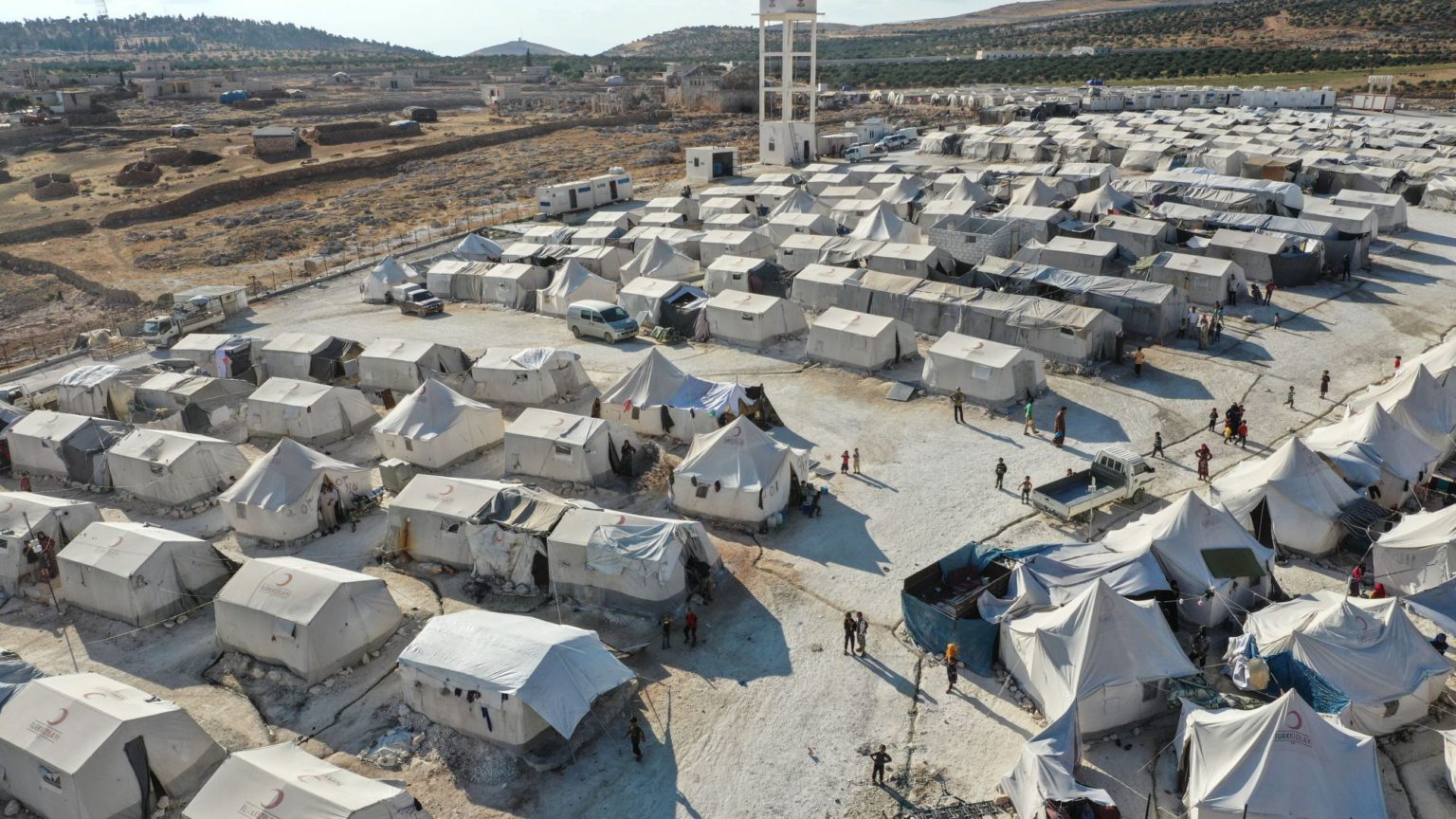 Since the beginning of December last year, forces aligned with Bashar al-Assad’s Syrian government, backed by the Russian military, have ramped up efforts to retake territory in the north-western province of Idlib, the last remaining rebel-held portion of Syria.

Regime forces, bolstered by Assad-friendly, Iran-backed militias, have conducted operations on the ground, while Russian jets have bombed from on high. These actions have pushed many of Idlib’s current three million inhabitants – 1.5million of whom had already been displaced by the conflict elsewhere in Syria – into an ever-more perilous situation.

They have been forced to seek refuge, but there is nowhere to go. Turkey, already host, at the EU’s financially incentivised behest, to over 3.5million Syrian refugees, has shut the only escape route to the north. And from every other direction regime forces threaten. So amid the biting cold of winter, hundreds of thousands of Syrians are without homes, and sometimes even shelter. The UN estimates that 900,000 people find themselves in this situation. Little wonder that Matt Lowcock, the UN’s under-secretary-general for humanitarian affairs, warned that Syria was facing ‘the biggest humanitarian horror story of the 21st century’.

Idlib is certainly host to ‘a humanitarian horror story’. But that’s because it has become the site of the last attritional conflict in a nine-year-long civil war. And it is a conflict that has been a long time coming.

Following on from the establishment of a ‘de-escalation’ zone in Idlib – one of four similar zones in Syria – in 2017, the following year Turkey and Russia reached a further agreement to establish a demilitarised buffer zone in Idlib, to be policed by Turkish and Russian forces. In theory, this agreement was meant to help reduce the fighting between government forces and assorted rebel forces. In practice, not only did intermittent fighting between all sides persist, but Idlib started to serve as a refuge, not just for hundreds of thousands of internal refugees, but for rebel militias, too.

One rebel group in particular has benefited from this quasi-protectorate established by international actors: Hayat Tahrir al-Sham (HTS), the organisational descendent of Jabhat al-Nusra, and a one-time affiliate of al-Qaeda.

Since 2018, HTS has worked with, and, when necessary, against rival Islamist militias, and has become the dominant force in Idlib. Some estimate it numbers as many as 100,000 fighters, while others put the figure closer to 10,000.

As the largest jihadist grouping in Syria, it represents a significant threat to the Syrian regime. It may be more pragmatic, and less given to the spectacular, than ISIS. But it shares with its notorious sibling the same commitment to a strict version of Salafist Sunni Islam, and the same end goal of an Islamic state. Given this, those domestic and international actors whose objective it is to shore up Assad’s Syrian regime were always going to have to move against HTS at some point. And so they now have, with potentially devastating consequences.

Yet, in response, some in Western political circles still seem to think that the solution lies in the hands of ‘Western powers’ – that, in the words of New Labour veteran and now NGO bigwig David Miliband, ‘The catastrophe in Idlib is a symptom of the utter failure of diplomacy and abandonment by the international community of Syrian civilians’.

If only. A large part of the problem in Syria is that ‘Western powers’ and ‘the international community’ have been far too involved. At every stage of Syria’s drawn-out destruction, this revolt-cum-civil war has become ever-more internationalised, and the solutions ever-more removed from the hands of Syrian civilians. A conflict that might once have been susceptible to resolution from within Syria has been rendered intractable by the intervention of actors from without.

This was apparent from the moment the US called for Assad to step down in 2011. Almost overnight, Syria became a theatre in which the evolving, incoherent interests of the US and its allies entered into a tangled conflict with the interests of Russia and Iran, and, of course, NATO member Turkey. At one point, in the early 2010s, the US was backing its NATO ally, and the disparate, largely Islamist forces assembled under the banner of the Free Syrian Army, against Assad, and therefore against Russia and Iran. Then, from 2015, it started backing the Kurds against ISIS, and, implicitly, Turkey, and therefore helping Assad, Russia and Iran. And then, last year, the US betrayed the Kurds, and threw itself behind Turkey once again.

What is happening in Idlib itself is not only a humanitarian catastrophe, then. It is also a continuation of this thoroughly internationalised civil war. Russia’s involvement is well documented. As is the involvement of Turkey, which is simultaneously deploying its own military, while protecting its southern border. But the US, having intervened on Turkey’s behalf last year, when it withdrew US troops from Syria and greenlit the Turkish assault on the Kurds, is also still lurking, loyally, in Turkey’s corner. Hence, after 13 Turkish military personnel were killed this month by Syrian government forces, US secretary of state Mike Pompeo pledged the America’s ‘full support’ for ‘Turkey’s justified self-defence actions in response’.

What makes this absurd is that Turkey is not a neutral observer in Idlib. It is aligned and coordinating with HTS, the biggest Islamist threat in the region since ISIS. So in siding with Turkey, the US is aligned, at one remove, with jihadist militants – the very type of grouping the US and its allies have hitherto always expressly opposed.

So Syria has not been abandoned by the international community, as Miliband suggests. It has been consumed by it. International actors have entrenched what was a civil conflict, backing and reinforcing domestic actors to the point where neither side can win or lose without significant bloodshed. Even the situation in Idlib right now is inseparable from the machinations of the international community that established it, unwittingly but effectively, as an anti-regime stronghold.

Of course, supporters of further external intervention will contend that this is now simply about helping Syrian civilians. About averting a further humanitarian disaster. And, in an obvious sense, any plans for immediate aid, be it food or medicines, should be supported.

But the humanitarian narrative always does more than that. In this case, it is portraying the situation in Idlib as a product of the Syrian government’s callousness. A result of Assad’s cruelty. A consequence of Russia’s ruthlessness. And in doing so, it is a way of justifying the West’s existing intervention. A way of misrepresenting a long, messy civil war, with right and wrong on either side, as a simple tale of misery visited upon innocents. A way, ultimately, of dressing up support for one side of the conflict – in this case, that of Turkey and its jihadist clients – as something somehow above the conflict.

But the uncomfortable truth is that there is no space ‘above the conflict’. No umpire’s chair from which Western powers can judge and intervene solely on humanitarian grounds. Because they are already implicated in the conflict. They have already taken (multiple) sides. If Miliband, his NGO ilk and the Western powers to which they are in thrall are serious about helping the Syrian people, they could start by doing what they have singularly failed to do so far: leave Syria alone.