This election is about one thing and one thing only

Democracy is on the line. Do whatever you can to defend it. 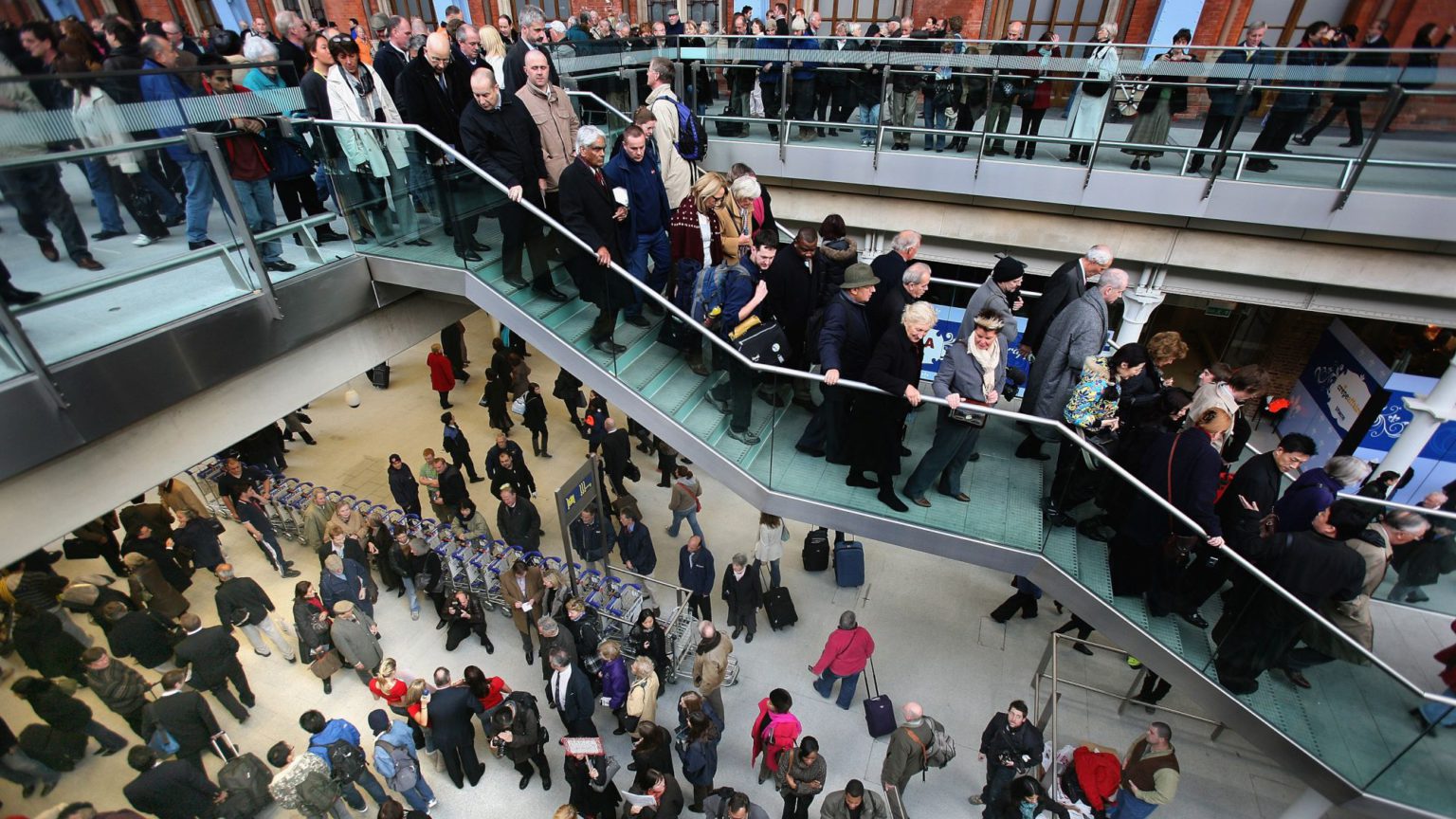 There was a certain irony to the Matt Hancock fake-news weirdness during the election campaign. A ‘Tory source’ claimed that during Mr Hancock’s visit to a Leeds hospital the other day, one of his aides was punched by a Corbynista. Only it didn’t happen. Hancock’s man actually just walked into a protester’s arm. Oh dear. The left and liberal sets’ response to this fake news was swift and unforgiving. The Hancock punch story was invented, they said, to distract attention from the issues that really matter, especially the NHS. And there’s the irony: in truth, almost every element of this lame, insulting, hollow election campaign has been designed to distract attention from the only issue that matters right now: democracy.

The NHS, public spending, taxes, the bizarre obsession with whether or not a politician would detonate a nuclear bomb (Swinson: of course; Sturgeon: never) – all of these talking points knowingly and desperately draw the public gaze away from the fundamental question that has gripped this nation for the past three years: are we a democracy or aren’t we? Do our votes count or don’t they? Will Brexit happen or won’t it? This is the only issue that matters. Every other issue hinges on it. Health, education, industry, growth, immigration, defence – all of these concerns come second to the question of democracy, because all of them can only be properly debated and resolved through democracy. Resolving the democratic deficit and taking seriously people’s right to determine the fate of the nation is the only basis on which Britain can progress right now.

We should remind ourselves that the election itself is a direct product of the profound democratic deficit in Brexit Britain. We are voting today because the political class is unwilling and / or incapable of acting on the 17.4million votes cast for Brexit in 2016. It was the establishment’s flat-out failure to respect, never mind institute, the people’s cry to leave the EU that has made this election necessary. This election is a direct product of the current chasm-sized mismatch between the public and the political elite – between a popular will calling for a radical shake-up of the political system, and an exhausted, cautious establishment unwilling to deliver on that call. We’re voting because they do not respect our votes – this is the deep contradictory element at play today.

What this election campaign has confirmed is the existence of a powerful animus towards the popular will. Anti-democratic sentiment is rife within the political elite. It expresses itself not only in the narrow and determined crusade to stop Brexit but also in all the attendant arguments that have been thrown up by that crusade. In the idea that voters cannot be trusted to make big constitutional choices. That we’re too easily led by memes and bus adverts. That we suffer from ‘low information’ and need to be enlightened by experts. That we don’t know what we’re voting for. Over the past three-and-a-half years, anti-democracy of Victorian proportions has exploded in political circles, giving rise to some of the most explicit expressions of anti-people sentiments, and even class hatred, that we have seen in decades.

This animus towards the popular will has been apparent throughout this election. The Liberal Democrats went furthest – they went too far, in fact, even for the reactionary Remainer establishment that is devoted to the overthrow of the vote for Brexit. The problem with the Lib Dems’ election promise of unilaterally revoking Brexit is that it let the cat out of the bag: it made plain the intention of a significant section of the establishment, which is to prevent the enactment of the most populous expression of democratic intent in the history of this country. The Lib Dems laid bare the extreme anti-democracy and anti-people views of sections of the elite, and embarrassed even hardcore Remainers. The Lib Dems suffered for their honest authoritarianism.

The Remainer elite prefers to disguise its anti-democracy in the language of democracy. This is why Labour has won more favour over the past few weeks among the Remainer powers-that-be and the anti-Brexit middle classes – because its promise of a second referendum makes the planned overturning of the popular will seem more palatable. This is the great and terrible irony of Corbynism: it presented itself as a radical new movement, but now Jeremy Corbyn’s Labour Party is the elites’ favoured tool for thwarting the people’s will. A party founded to give voice to the working classes is now used by middle-class elitists to silence the working-class cry for Brexit. What an ignominious end to social democracy in this country. To the extent that Labour’s showing in this election appears to be improving, it is largely because of the tactical-voting plans of anti-democratic elements in society whose overarching aim is to stop Brexit.

Then, on the other, supposedly pro-Brexit side of the political class, there are troubles too. This wing is too pragmatic, too cautious, and often incapable of understanding the true importance of Brexit. Witness how the Tories discuss Brexit almost as a burden. ‘Get Brexit Done’, says Boris, ad infinitum. Let’s get it out of the way, he says, so that we can go back to talking about ‘normal’ stuff like the NHS and policing, etc. What the Tories seem not to understand is that to many people Brexit is not merely a technical task, far less a pesky bridge to be crossed – it is an opportunity. An opportunity for radically reordering and democratising politics in this country by making it more accountable to us, the people. It isn’t a tick-box exercise – it’s a chance to overturn the entire technocratic era and institute the beginnings of real democratic debate and real democratic life.

Sadly, the Brexit Party has sided too much with the pragmatism and tendency to compromise of the Tory party. Its decision to withdraw from 317 Tory-held seats, and in the process to disenfranchise millions of people who want radical change, suggested it is not as independent of the cautious elites as it presented itself. It also undercut its own message to working-class Leave voters in particular. ‘You can’t trust the Tories with Brexit’, was the message to these voters, instantly raising the question of why, in that case, the Brexit Party entrusted millions of votes to the Tories by withdrawing from 317 seats. The Brexit Party’s promise may yet be fulfilled, however, especially if it does become a broader pro-democratic Reform Party after the election, as Nigel Farage has suggested it will.

The crisis of our era is actually very simple: it is that our political institutions are not fit for purpose; they do not tally with public sentiment; they are incapable of giving voice to the popular will, and in fact they are innately hostile to the popular will. The mass vote for Brexit exposed the exhaustion of the technocratic and neoliberal order. It made clear the dying nature of the old political system. And yet, as Gramsci wrote in his prison notebook in a different era of crisis, ‘the crisis consists precisely in the fact that the old is dying and the new cannot be born’. This is where we are at in the UK: the old politics is dying, and becoming more and more isolated and authoritarian as it does, while the new politics yearned for by millions is not born yet.

Is this an argument for being downbeat? Not at all. The public desire for meaningful political change is stronger than it has been for decades. Brexit exercises the public consciousness like no other issue. The expectation of democracy has intensified. The promise of democracy is cleaved to by millions of people, even as it is disregarded by the establishment. What we need now are parties and institutions that reflect this popular will. Radical populist parties and ideas are called for. Sadly, they do not exist in this election; the new is not yet born. But we still have choices. We can still vote in a way that expresses support for democracy and opposition to the Remainer elites. spiked isn’t supporting any particular party in this election but we are saying this: use your vote in whatever way you think will promote the case for greater democracy and further weaken a dying, desperate establishment that fears the popular will more than anything else.