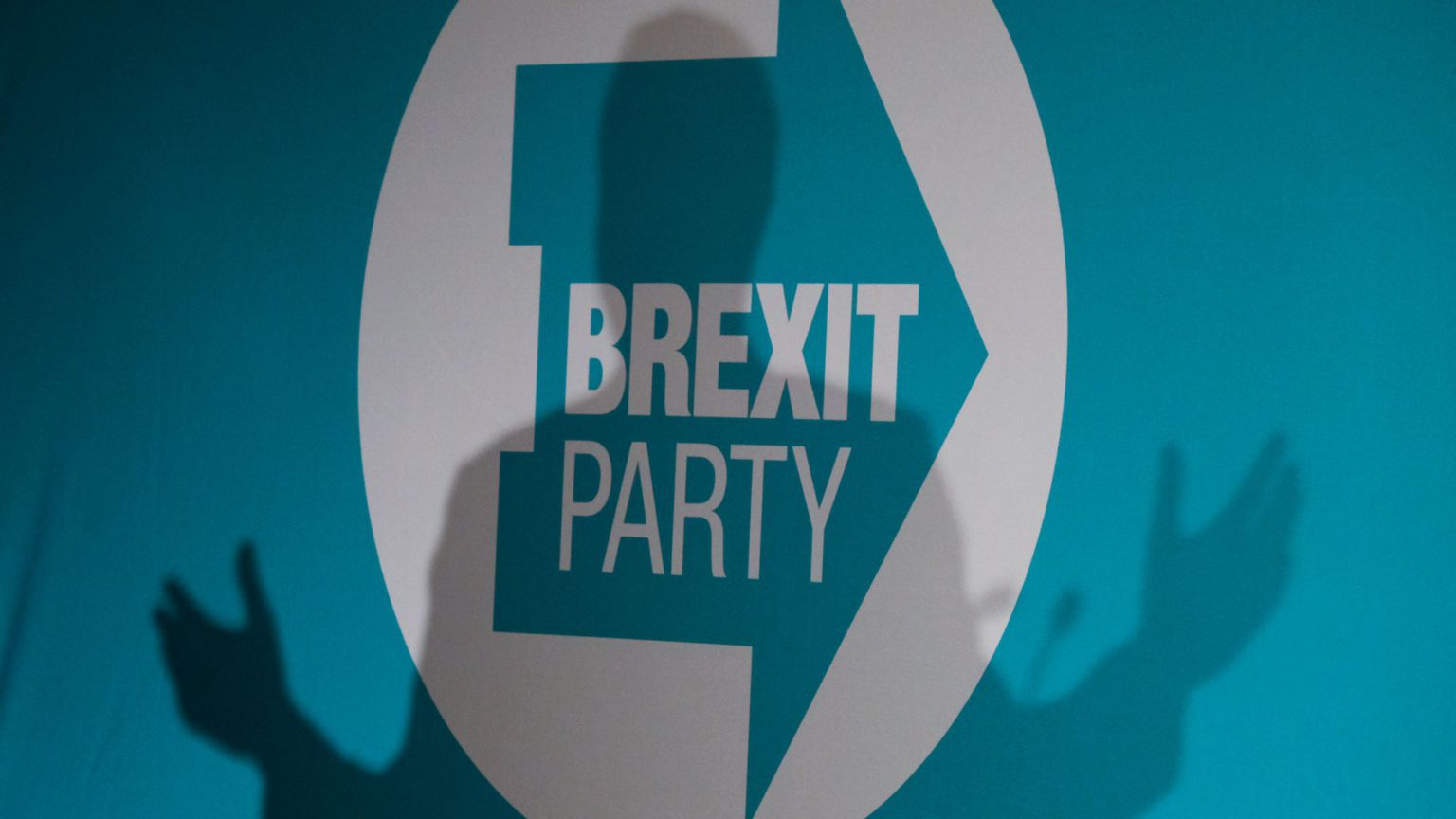 The decision to withdraw candidates means many people cannot vote for a clean-break Brexit.

When the country voted, by 17.4million to 16.1million votes, to leave the European Union, it was a decisive blow for democracy in the face of a concerted establishment campaign to maintain the old order.

The issue of the referendum was clear. Should Britain be a democratic country that makes its own laws or should it have laws written in Brussels? The Leave vote was heterogeneous, drawing on disappointed supporters of both the Conservative and Labour parties. But there were also a great number of first-time voters with no party allegiance. The sentiment that drove the vote was a marked disaffection with the mainstream political machines.

The paradox of the referendum was that the people who opposed the Leave vote were still in charge of the government tasked with enacting it. The Conservative Party’s leadership campaign put Theresa May in charge. The 2017 election clarified very little because of the fundamentally dishonest approach of the mainstream parties. Both stood on a commitment to honour the vote but the representatives they stood were significantly opposed to seeing that through, as became clear.

May had campaigned for a Remain vote and only reluctantly accepted the outcome of the referendum. She told allies that she hoped to mitigate the worst effects of the decision taken by the people in the referendum, which means she wanted to neuter Brexit.

The Withdrawal Agreement that May negotiated was rightly called Brexit in Name Only – BRINO. It left Britain outside of the decision-making mechanisms of the European Union but still subject to European Union law.

The establishment campaign for Remain regrouped and has made a concerted effort to undo the decision to leave and undermine the support for it. The government pursued a policy of delay, hoping the Leave sentiment would dissipate.

They were helped by the relative lack of organisation in the Leave camp. The UK Independence Party was destabilised by the decision. If Mrs May was intent on leaving, as she said publicly, then their fox had been shot. Labour and Conservative Leave voters, too, were disarmed by the government’s stated position that we would leave.

Without sustained pressure from Leavers, the elite recovered confidence that it would manage to derail the Brexit decision behind closed doors. The Westminster parliament turned into a forum for picking Brexit apart. Roland Rudd’s People’s Vote campaign organised large demonstrations of the middle classes, pained by the unexpected impact of the masses on British political life. That gave May the confidence to push ahead with her BRINO Withdrawal Agreement.

When it became clear that the negotiations were still meandering on, and that the March 2019 deadline would be replaced by an extension to 31 October, it seemed as if the Remain campaign had succeeded in slowly winding down the mood for leaving and would drag things out indefinitely.

With the deadline approaching, key figures in the Leave.EU campaign – Richard Tice and Nigel Farage – set up the Brexit Party to contest the European elections in May 2019. The organisation was thrown together very quickly but succeeded in winning the largest number of British seats in the European Parliament. It was a remarkable turnaround that revived the Leave campaign by giving it the organisational focus of the Euro-elections. The support for the new Brexit Party came from disaffected Tory and Labour voters.

The impact of the European elections overturned all previous expectations. The Conservative Party was decimated. Labour’s prevarication on Brexit was exposed as significant numbers of Labour supporters shifted to support the Brexit Party, while their urban middle-class vote switched to the Lib Dems.

The challenge was clear. A Westminster parliament that squandered Brexit was in danger of being swept aside by rebellious voters at the next election. The team at the Brexit Party headquarters set about recruiting 650 prospective parliamentary candidates to stand.

The impact on the parties was marked. The Labour Party was being squeezed on both sides. Tragically, for both its electoral position and its soul, Labour pitched more determinedly into the Remain camp. The Tories went the other way. May was persuaded to stand down. Boris Johnson, who had played a leading part in the official Leave campaign, overwhelmingly won the vote among Tory party members, bruised by the betrayal of Brexit. Though the Tory Remain MPs made life difficult for Johnson, his core team was determined to embrace the Brexit rebellion.

Over the summer, Johnson pitched hard in the direction of the Brexit Party’s policy, slowly squeezing its support. He reopened negotiations with the EU and even threatened the possibility of No Deal. To emphasise his sincerity, he ordered the civil service to prepare to leave on 31 October. This was an elite campaign led by ministers and (reluctant) civil servants, and so once again Brexit was taken off the streets and put into the corridors of power.

The Brexit Party was under pressure. But its hope was that if Johnson failed to leave by the new deadline, then voters would see through his rhetoric and blame him for stalling once again. But Johnson effectively shifted the blame for the delay on to the stalling parliament. The unstated meaning of Boris’s slogan ‘Get Brexit done’ is ‘Get Brexit out of the way’, so that we can get back to business as usual.

The new Withdrawal Agreement that Johnson struck with the EU was different from Theresa May’s, but how much was open to question. Nigel Farage argued that it was really Brexit in Name Only, like May’s. I agree with him. The Brexit Party argued for a ‘clean-break Brexit’ – that is, to leave without a deal and trade under WTO terms.

The net effect of both the new Withdrawal Agreement and the renewed Conservative campaign to own Brexit was that, once again, the popular movement for democracy would be contained and power concentrated in the hands of the ruling elite.

The pressure on the Brexit Party to sustain the campaign was considerable. Many of the supporters they had recruited over the summer – including prospective parliamentary candidates – were drifting back to Boris’s more Brexity Conservative Party. Worse, the Conservatives claimed the Brexit Party were jeopardising the very thing it said it wanted – Brexit – because it would split the Leave vote, letting the Remain parties win a majority. Johnson’s polling numbers continued to recover while the Brexit Party’s were squeezed.

It was under this pressure that the Brexit Party had to look at its options for the coming General Election and decided not to contest Conservative-held seats but only Labour and Lib Dem seats. The rationale for doing so is that the Conservative Party’s stated policy is to leave while both the Lib Dems and Labour are for Remain, whether through revoking Article 50 or a second referendum.

The decision to pull back and fight fewer seats is a practical response to less favourable polling numbers. But the decision not to contest the Conservative Party effectively means that there is no national option to vote for a ‘clean-break Brexit’. The case against the new Withdrawal Agreement – the difference between the Conservatives and the Brexit Party – is no longer clearly expressed in the election.

The decision has caused some heartache among Brexit Party supporters and candidates who were called upon to stand down. It has also led many to gloat at the Brexit Party’s retreat. Those blaming Nigel Farage are not really taking into account his more than 20 years fighting for Britain to leave the EU.

Overall, the main lesson of the three-and-a-half years since the referendum is that the establishment parties were always determined to undo what was in effect a challenge to their authority. The Conservative leadership has done so by embracing Brexit in order to neuter it. Labour and the Lib Dems have set their faces against it.

What is left in the election are lots of rebel candidates who want to fight for democracy. Brexit Party candidates – like Pete Wiltshire in Wakefield, James Woudhuysen in Carshalton and Wallington, Catherine Cui in Poplar and Limehouse, Paddy Hannam in South Islington, Alka Sehgal Cuthbert in East Ham, Michelle Dewberry in Hull, and many more – are still raising the flag for Brexit. There are former Brexit Party candidates, too, who have chosen to stand as independent Brexiteers, like Caroline Coram in Sleaford and South Wykeham and Paulette Furse in Sevenoaks. And there are other independents, like the Lexiteers’ champion, George Galloway, in West Bromwich East.

The referendum vote was a significant moment in the revival of democratic politics in Britain. Now, the old parties are trying to claw their way back to power. It is always harder to fight on the back foot, but in the end the problem that the Leave vote highlighted has not gone away. Political parties that aim to rule behind the backs of the people will be exposed again and again. Every vote for democracy we win today will count in the future.