A Brexit that limits democracy is not a Brexit worth having. 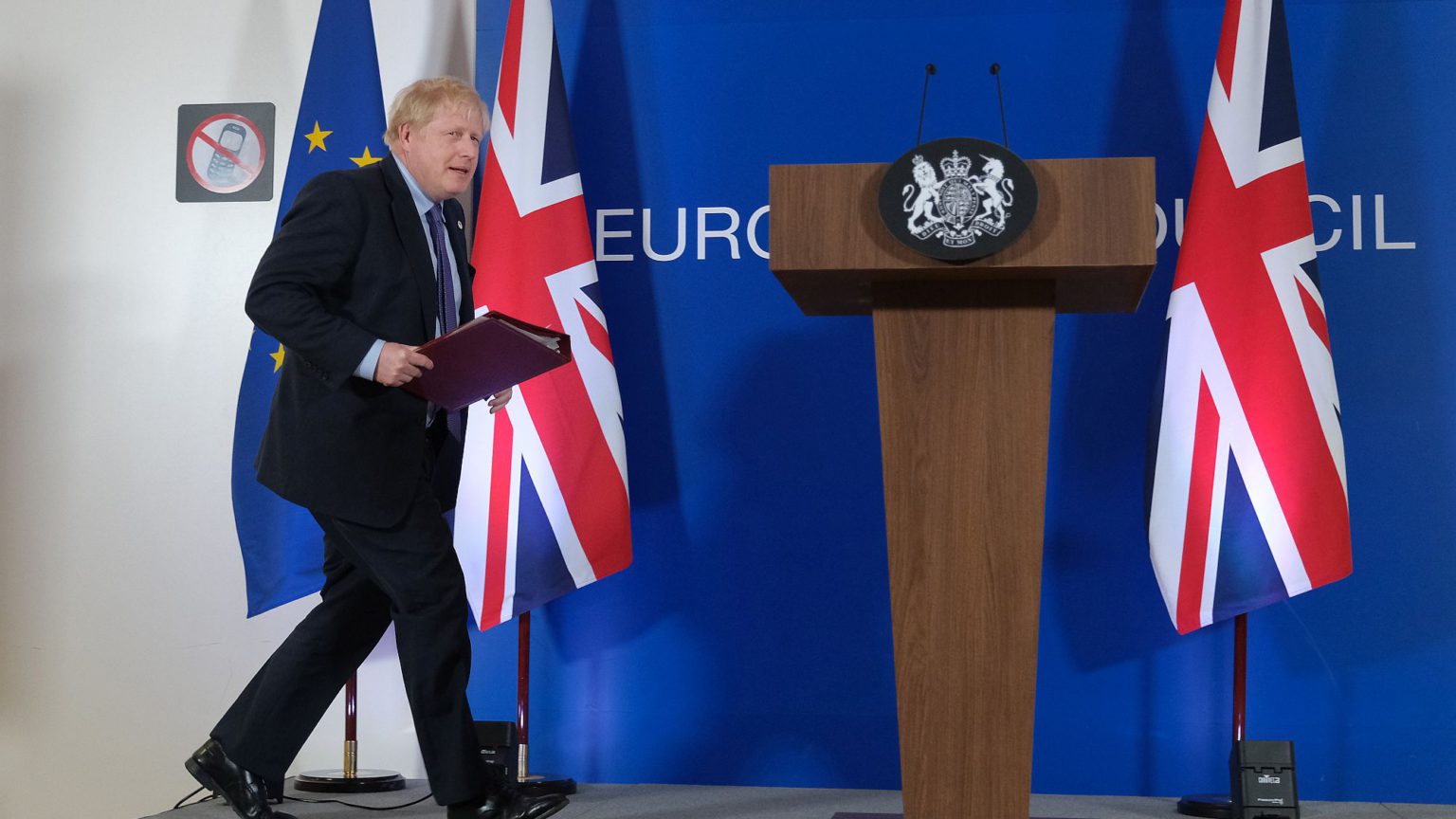 Boris Johnson led the Leave campaign with the slogan ‘take back control’. When he made his concluding remarks at the Wembley Arena debate, he was cheered by millions when he declared ‘that this Thursday can be our country’s independence day!’. Millions voted to leave the EU because it met their aspiration for greater democracy. They wanted powers to be repatriated from the EU in favour of their elected representatives in parliament.

And yet, more than three years later, the government, now led by Boris Johnson, has been ground down by a political class that has never accepted that aspiration for greater democracy. It has responded to the popular desire to ‘take back control’ by seeking to take power from the EU in order to vest it in technocrats empowered by treaties, such as the one that Boris Johnson is currently seeking to have approved by parliament.

This is not a Brexit ‘deal’. Boris Johnson is proposing more than a deal. It is a treaty, a document that will regulate by force of law. A treaty is essentially a contract that sets out what the signatories can and cannot do. In other words, a treaty pre-determines and regulates future conduct. It takes issues out of the political sphere, in which the people engage in a dialogue with their elected representatives. And it places these issues in a technical sphere, in which the people and their elected representatives are mere observers of judges, who interpret what the treaty requires, and of technocrats, who do as the treaty requires.

The prospective treaty known as the ‘Withdrawal Agreement’ – most of which was negotiated by Theresa May, and kept following Johnson’s renegotiation – sets out in a ream of paper what Britain is required to do during a transition period, which is set to start when Britain formally leaves the EU and last until the end of next year (subject to any agreed extension). The phrase ‘Withdrawal Agreement’, therefore, is also misleading. The treaty establishes that during transition Britain will remain subject to the EU laws and policies that the British people voted to be freed of. As the recital says, during transition ‘Union law, including international agreements, should be applicable to and in the United Kingdom, and, as a general rule, with the same effect as regards Member States’. This means that during transition Britain will be subject to EU-determined laws on free movement, trade, state aid, competition policy, agriculture and fisheries. In fact, during transition the UK will remain subject to almost the entire panoply of policies covered by EU laws, just as it is now.

The principal bits of the EU that Britain will withdraw from under this ‘withdrawal’ agreement are the EU’s decision-making institutions, from the EU Council and Parliament down to every other EU institution, body, office and agency (Article 7). This means that during transition, Britain will be subject to the EU’s laws but will have no say in how they are framed or applied. Britain will be subject to rule by a body over which it has no voice, vote or veto. This treaty will not take back control — it will leave control vested in the EU for the period of transition. To all intents and purposes, during transition, the UK will be governed by a foreign power in respect of all policy areas over which the EU is competent (and that is rather a lot).

Treaties of this nature are only entered into by states that have been conquered or defeated. In Britain’s case, its political class has been defeated, at the ballot box by a public that voted in June 2016 to take back control. But rather than accept that power should return to the people, the UK’s Remain-dominated elite would prefer to be ruled by a foreign institution, the EU, than by a parliament accountable to its electors.

And this won’t end with the transition period, either. Transition has always been about getting the UK used to supplicant status. Some commentators have noted with concern one aspect of this domination: that the European Court of Justice (ECJ) will be the ultimate decider of all issues that arise under the treaty. Outside of the colonial era, international treaties have invariably provided for dispute resolution by independent arbitration, rather than by a court that belongs to the other treaty party. As Dr Carl Baudenbacher, a Swiss lawyer who recently retired as president of the EFTA Court, said: ‘It is absolutely unbelievable that a country like the UK, which was the first country to accept independent courts, would subject itself to this.’ And Martin Howe QC, who chairs Lawyers for Britain, predicted that ‘we will have bitter cause to regret such concessions in future years as unpredictable and activist judgements come out from the ECJ, which the UK and our parliament will have no choice but to obey’.

The reality of this treaty has been glossed over because the British political class has framed the post-referendum debate to ensure that a No Deal exit is off the agenda. As a result, many Brexiteers, even the so-called Spartans of the European Research Group (ERG), have decided that Boris Johnson’s ‘deal’ must be supported because the choice is between no Brexit or Brexit with his ‘deal’. But this framing of the debate means that the choice is between rule by Brussels (with EU membership) or rule by Brussels (with an EU treaty).

Tory Brexiteers argue that transition will only last for about 14 months (until 31 December 2020). And some in the ERG have even claimed that transition will pave the way for a No Deal exit on 1 January 2021. This argument ignores political reality. As Sir Ivan Rogers, the former UK Brexit negotiator, observed: the EU’s aim has always been to ‘maximise leverage during the withdrawal process and tee up a trade negotiation after our exit where the clock and the cliff edge can again be used to maximise concessions from London. So that they have the UK against the wall again in 2020.’

But by 2020 the UK will be in a weaker position to negotiate with the EU. It will have paid the EU a colossal exit fee, which is not legally required, of about £39 billion, so that bargaining chip will have gone. And the EU will have had 14 months to pass and apply laws that suit the needs of German exporters, French fishermen and European bankers that will have left the UK desperate to exit transition. But worst of all, the UK’s political class will, by January 2021, have a trump card: it will be able to sign away chunks of British sovereignty on the grounds that, in comparison to transition, the UK will be regaining a few modest powers.

The outline of Britain’s future relationship with the EU is prefigured in the Political Declaration. It begins by stating that the ‘basis for cooperation’ is ‘core values and rights’ that ‘incorporate… the framework of the European Convention on Human Rights’ (Paragraph 7). On this basis, the odious ECHR looks set to be cemented into the British constitution with a further treaty.

The Political Declaration then refers to the creation of a free-trade area which will be anything but ‘free’. What is proposed is ‘deep regulatory and customs cooperation, underpinned by provisions ensuring a level playing field’ (Paragraph 21). Policies covering ‘state aid, competition, social and employment standards, environment, climate change, and relevant tax matters’ are specifically mentioned as needing to be regulated by the future treaty (Paragraph 77). In other words, the UK’s future relationship with the EU will be premised on renouncing parliament’s right to determine swathes of economic and social policies.

In recent years, treaties have become a powerful tool for restricting democracy. Treaties with a limited and specific focus, which either party can unilaterally end, should not threaten democracy. In the Brexit context, several such treaties would be required, for example to keep planes flying and lorries rolling. But the treaties envisaged by today’s Remain-dominated political class – first a 535-page Withdrawal Agreement, then a future relationship premised on embracing the ECHR – do threaten democracy. They seek to turn political issues into technocratic issues. They will be drafted by a political class that loathes the idea of ordinary people determining policies and laws democratically. This political class loves the idea of people like them pre-determining policies and laws with the stroke of a draftsman’s pen, laws which are then interpreted and applied by other people like them – well-paid technocrats who can lord it over ordinary people with the authority of a treaty.

Boris Johnson’s proposals will shatter the paramount principle of any liberal democracy: that its people are sovereign. Membership of the EU always tested that principle, but at least it could be said that EU membership was about pooling sovereignty, rather than surrendering it. But under the ‘Withdrawal Agreement’ there will be no pooling sovereignty, only a surrendering of sovereignty to a foreign power. Once this principle has been abridged, the UK will be at the EU’s mercy when it comes to accepting onerous treaty terms in the future relationship.

The vote to leave the EU was a vote for democracy. It expressed the desire for ordinary people to repatriate laws from Brussels and vest them in a parliament where lawmakers would be answerable to the people. Brexit has been derailed by a political class that will not accept the impulse behind Brexit. But that impulse will not die, and it now needs to be channelled into rejecting Boris Johnson’s ‘deal’. The British people voted to take back control — they should settle for nothing less.

Jon will be speaking at the session ‘Constitutional Crisis: do we need a British Bill of Rights?’ at the Battle of Ideas festival in London on 2 November.