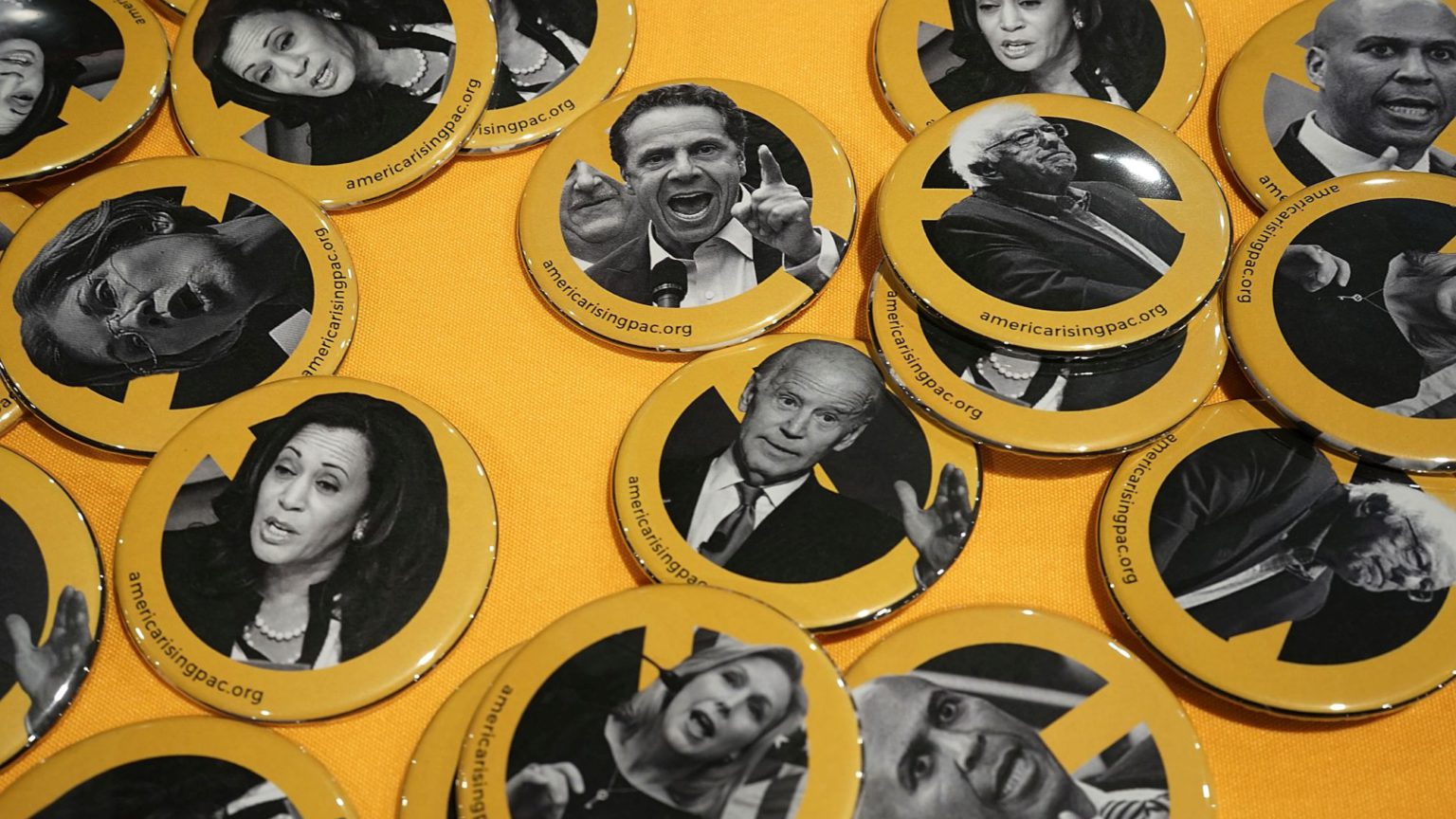 The Democrats who cried wolf

Their overuse of the word ‘racist’ has made it harder for them to call out Trump.

An article in the current issue of the New Yorker asks whether the automotive era was a ‘terrible mistake’. In the piece, cars are blamed for creating a climate crisis and wars. Roads are deemed the ‘setting for our most violent illustrations of systemic racism’. When we’ve reached the point where ‘roads are racist’ is taken as a serious argument, it’s clear that the term ‘racism’ is being applied too casually.

Many self-described liberals today view the world through the prism of race, especially educated white liberals who have mastered the skill of detecting racism in places unknown before. As Zach Goldberg highlighted in a recent essay, the percentage of white liberals who believe racial discrimination is a very serious problem jumped from just below 30 per cent 20 years ago to almost 60 per cent in 2016. Educated white liberals are now much more likely to believe racism is a major problem than black and Hispanic Americans. White liberals are also the only group that looks more favourably on other racial and ethnic communities than they do on their own. In other words, they are embarrassed by other whites.

At the same time as concern over racism among liberals has shot up, racism has become less acceptable in US society. Clearly, the US has progressed from the days of Jim Crow and its aftermath. And the rejection of racist views appears to have continued – even under Trump. A paper published by Daniel J Hopkins and Samantha Washington, sociologists at the University of Pennsylvania, found – against their expectations – that Americans have actually become less inclined to express racist opinions since Donald Trump was elected. Anti-black prejudice, they found, has taken a sharp dive since 2016, among both Republicans and Democrats equally.

And yet, today, the r-word is ubiquitous. We are told that the US itself is inherently racist, that it was founded on slavery and is thus irredeemable (ignoring the American Revolution’s breakthroughs for liberty, the thousands who gave their lives in the Civil War to end slavery, and the civil-rights movement). Reparations for slavery are being seriously considered by Democratic Party candidates for president (genealogy tests may become mandatory – invest in 23andMe!). The American flag and national anthem are protested against at sports games, because, activists say, the entire country is imbued with racism.

In the political sphere, the Democrats have overused the term racism so much that it has become predictable and tired. It is no longer good enough to denounce racism per se – Democrats now feel the need to point out that racism infuses all areas of life. Just listen to Elizabeth Warren during the recent Democratic debate: ‘We live in a country now where the president is advancing environmental racism, economic racism, criminal-justice racism, healthcare racism.’ Race and racial identity matter to Warren – so much so that she lied and claimed Native American ancestry to advance her career.

Of course, we know that Democrats believe Trump is a racist. That accusation was flung at him time and again during his run for president in 2016, when he was (rightly) castigated for his Obama ‘birther’ allegations, his Central Park Five fearmongering, and his remarks about Mexican rapists, among other things. And today the phrase ‘Trump’s racism’ flows freely, as likely to turn up in news articles as in opinion pieces.

But the Democrats don’t stop at Trump, or even Republicans, when it comes to making racism allegations. They use the r-word as a weapon against their fellow party members too, if doing so can advance their own standing. Consider how Kamala Harris called out Joe Biden on the issue of race in one of the recent presidential debates: she criticised his work with segregationist Democrats and his opposition to forced school busing. Harris’s attack was a classic in the style of identitarian call-outs. She accused Biden of racism while disingenuously claiming not to do so. She went back far in his history to find some material (1970s busing is not exactly a hot topic today). She claimed that Biden’s old views hurt her personally, making her unassailable. And she implied that her racial identity (Harris is of mixed race) gives her authority on the topic at hand. After the debate, Harris backtracked and said she wouldn’t impose busing on communities today… which just so happened to be the same position Biden took in the past. So it was just an exercise in political point-scoring, denigrating real issues of racism.

Likewise, Democratic congresswoman Alexandria Ocasio-Cortez recently called out House leader Nancy Pelosi, accusing her of ‘singling out newly elected women of colour’ in the Democratic Party. This followed Pelosi criticising Ocasio-Cortez and her fellow members of the ‘Squad’ on the issue of border-protection funds. Rather than respond with a political argument, Ocasio-Cortez attacked Pelosi’s motives and implied she was driven by racism. Again, the issue of race was used as a political weapon, with Ocasio-Cortez hoping she could erect a forcefield around herself so that she could not be criticised.

The Democrats’ promiscuous wielding of the r-word is undermining their case against Trump. They have thrown the charge at Trump (and others) so often that, today, that epithet is likely to be greeted with a yawn by all except the most hardened Resistance types. Their cries of ‘wolf’ have been so frequent that when Trump truly does engage in racist language – as he did when he demanded that the Squad ‘go home’ – their denunciations of his racism now sound hollow and worn-out. The r-word just doesn’t have the devastating effect they expect it to have.

A week after the ‘go home’ comments, Democrats threw the allegation of racism at Trump again. This time it was in response to his criticisms of Democrat House member Elijah Cummings and the city of Baltimore: Trump called Cummings’ district a ‘rat- and rodent-infested mess’. But this time around, the accusation was treated even more sceptically. Trump’s focus on a black representative and a majority-black city seemed like it could have been driven by racist intent. But, on the other hand, Trump is known for waging petty personal attacks on anyone who investigates him (Cummings is chair of the House Oversight Committee).

In this case, the accusation of racism was not so easy to stick on Trump. It was easy enough to find Democrats who have said similar things: former Baltimore mayor Catherine Pugh once said the city stank of rats, while Bernie Sanders once likened Baltimore to a ‘Third World country’. The Democrats’ double standards – ‘it’s racist when Trump says it, but not when we say it’ – are noticed, and they lead people to tune out.

Some Democrats appear to believe that if they can just firmly attach a scarlet letter ‘R’ to Trump, they will win. This is politics via name-calling. The desire to declare Trump beyond the pale relieves Democrats of having to win political arguments. For example, most of the 2020 Democratic presidential candidates view the issue of immigration in racial and moral terms. What’s the answer to the border crisis and immigration generally? All Democrats have to offer is that Trump and his wall are racist, and that putting kids in cages is immoral – which is not really a compelling policy argument. The throwing around of the ‘racism’ charge is another way of telling people to shut up about immigration (or other issues), or else risk being labelled racist themselves. The implication is that if you don’t agree with the Democrats, then you too are racist and immoral.

Indeed, for a section of voters the repeated cries of racism coming from Democrats sound like accusations directed at them. Democrats have not denounced and distanced themselves from Hillary Clinton’s ‘basket of deplorables’ comment, which she made during the 2016 campaign. If anything, some Democrats continue to make sweeping generalisations about Trump’s white working-class voters. They denounce as ‘privileged’ some of the least privileged people in society. This attempt to shame Trump voters into feeling guilty for supporting him will only get people’s backs up.

For all of their efforts, the Democrats’ push to make ‘Trump is a racist’ a commonsense view among the population isn’t working. As a recent Rasmussen poll showed, the country remains divided on this question: 47 per cent think Trump is a racist, while 49 per cent disagree and say his opponents are accusing him of racism only for political gain. Trump deserves to be denounced for many of his statements, old and new. But given the Democrats’ use of the ‘racism’ accusation for partisan advantage, you can understand why many end up giving Trump the benefit of the doubt.

Many commentators are now talking about Trump having a ‘race-baiting strategy’ going into the 2020 election. But his outbursts seem to be more impulsive than evidence of a master plan. Moreover, the Democrats are keen to play the race card themselves, in particular to signal their moral superiority. The latest imbroglios show that both sides have an interest in stirring up racial divisions.

Many modern progressives see the world through a racial lens. They put plus signs against certain races and minus signs against others. That is a recipe for conflict. Levelling a charge of racism should be a serious matter, but the term has lost much of its sting and opprobrium today due to overuse and its extension to things that are clearly not racist. There’s an unfortunate irony to this weaponisation of race: if everyone and everything is racist, then nothing and no one is racist.