Andy Ngo and the violence of political correctness

Those antifa agitators are the militant wing of the cultural elite. 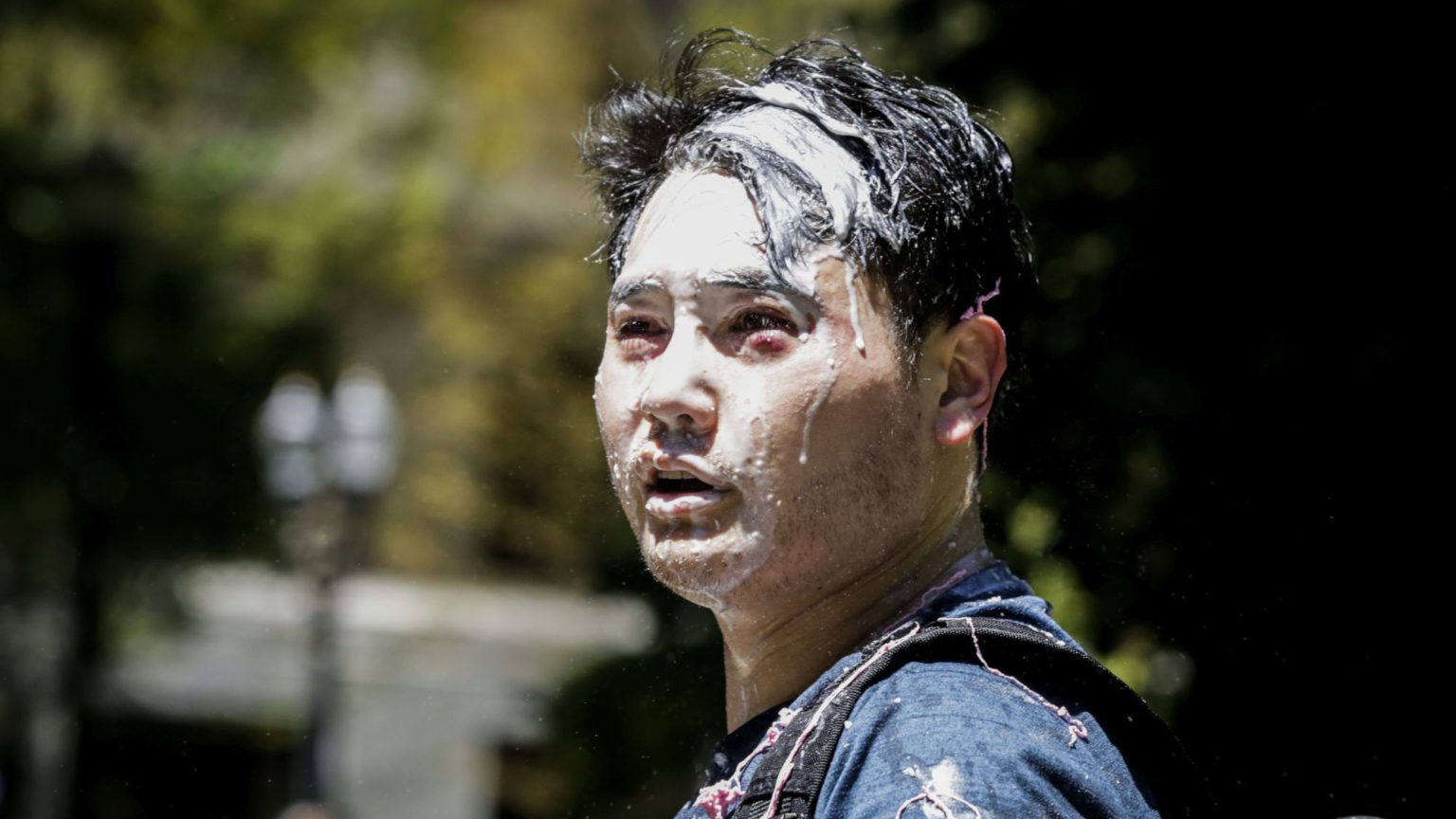 The most striking thing about the ‘antifa’ mob gathering in Portland at which the journalist Andy Ngo was violently assaulted at the weekend is that it described itself as ‘milkshake-themed’. There was a milkshake truck handing out fruity beverages to the antifa agitators. They hurled these milkshakes at alt-right protesters and at cops, too. And of course when Ngo was rounded on and punched and kicked for the crime of having criticised antifa’s behaviour, he was ‘milkshaked’. Masked protesters pelted him with milkshake as a kind of final humiliation. After all, that’s how you indicate that someone is an unperson these days, right? You throw milkshake at them.

The reason this is striking is that it is so clearly influenced by events in the UK, where during the Euro elections it became positively fashionable to pelt supposedly ‘far right’ people with milkshakes. Tommy Robinson, Nigel Farage and Carl Benjamin were all assaulted in this way as they campaigned for votes. And the chattering classes lapped it up. They celebrated the milkshakers. Scribes from the bourgeois press and even some mainstream politicians gave their nod of approval to the milkshaking of these allegedly evil people. And now antifa in the US has giddily embraced the same tactic. There could be no clearer proof that antifa is not the rebellious, revolutionary outfit it fantasises about being, but rather is the armed wing of the cultural elite; the militant front of the bruised establishment; the attack dogs of a political class still reeling from Trump and Brexit and consumed by disgust for ordinary voters whom they increasingly view as a dumb, far-right throng.

The attack on Ngo was deeply disturbing. He writes primarily for Quillette and has in recent months focused on the impunity of antifa mobs in Portland, the Jussie Smollett case and the fashion for making up hate crimes, and issues surrounding Islam, especially on the censorious trend for branding anyone who criticises Islam as ‘Islamophobic’. For doing these things, for expressing these opinions, he has of course been denounced as racist, Islamophobic, and a facilitator of white supremacy. (They can’t actually call him a white supremacist, given he is of Vietnamese descent.) At the weekend, in Portland, antifa visited extrajudicial corporal punishment upon Ngo for his various speechcrimes. A mob of middle-class white people beating up an Asian man in the name of challenging white supremacy – you couldn’t make it up.

Yet while the assault on Ngo was clearly vicious, an act of extreme intolerance, a form of violent censure, it would be wrong to view the antifa people who carried it out as eccentric outliers, as crazed, masked members of a dangerous fringe movement. The demand from supporters of Ngo that antifa be designated a terrorist movement or branded as fascists rather than anti-fascists is a mistake. The terrorist label would have authoritarian implications, potentially criminalising the antifa movement more broadly, including those who merely subscribe to its outlook and never take part in its actions. And to insist that we call antifa ‘fascists’ only plays into antifa’s own infantile game of seeing fascism everywhere. We can say antifa is censorious, authoritarian and intolerant without having to call them fascists.

But the main problem with singling out antifa idiots for particular opprobrium is that it overlooks the utterly mainstream role antifa plays these days. These people are best seen as the violent enforcers of political orthodoxy, the masked footsoldiers of an elite wounded and dizzied by the votes for Trump and Brexit. It is not remotely coincidental that antifa in its modern incarnation came into its own in the aftermath of these two electoral earthquakes – it is because it embodies, in bovine, agitated form, the fury of a bourgeoisie that has found itself rejected by voters. Its milkshake-themed gathering and milkshake-themed acts of violence over the weekend confirm the extent to which it is really just a Guardian editorial made flesh, the Twitterati in physical form, the children of the old establishment raging against those idiot voters who dared to defy that old establishment.

The milkshaking phenomenon speaks to the searing intolerance of today’s cultural elites. That some people think it is entirely acceptable to pelt certain politicians and journalists with milkshakes makes perverse sense. First, they have openly been told that it’s acceptable, by everyone from broadsheet columnists to Burger King. Some even referred to the milkshakings of the Euro elections as a ‘Milkshake Spring’, as if angry anti-democrats hurling milkshakes at politicians they don’t like – and metaphorically at the millions of idiots who vote for those politicians – are in any way comparable to the democratic warriors of the Prague Spring or of the more recent Arab Spring (RIP). A columnist for the Guardian – the bible of the chattering classes – said milkshaking is ‘not political violence at all’; it is an attempt to ‘reduce men of pomp to figures of ridicule’ and to teach a lesson to ‘purveyors of hate’.

Perhaps the milkshakes and fists and feet that rained down on Ngo weren’t political violence, either. Perhaps this was also a good, justified attempt to reduce a ‘purveyor of hate’ to a ‘figure of ridicule’. That is exactly what antifa will say: that Ngo, with his criticisms of the left, his questioning of hate-crime statistics and his defence of people’s right to mock Islam, was a ‘purveyor of hate’. And that is what numerous mainstream commentators and politicians say about voters more broadly. That if you voted for Brexit, you are a purveyor of hate, or at least an unwitting facilitator of hate. That if you voted for Trump you are very likely a ‘deplorable’, in Hillary Clinton’s words, who is ‘racist, sexist, homophobic, xenophobic, Islamophobic – you name it’. That is, a purveyor of hate. And that if you are a big fan of Brexit, you are worse than the Nazis, as Labour MP David Lammy has argued. Lammy recently said he would ‘pour whatever I can get my hands on’ over a white supremacist, speaking to the hysteria, instability and temptation to violence that have gripped the anti-Brexit, anti-Trump elites.

This is the thing: in the eyes of the anti-populist elites, everyone who disagrees with them is a purveyor of hate. Or a white supremacist. Or an Islamophobe, xenophobe, Europhobe, transphobe. Or alt-right. Or a fascist. Or worse than a fascist. One of the most successful acts of the political and cultural establishment in recent decades has been its rebranding of certain political and moral worldviews as ‘hate’, and therefore deserving of censorship or punishment. This relentless demonisation of certain views and certain people has nurtured a climate of extreme intolerance and now even violence. If you do not subscribe to their worldview, they will hound you off campus, try to make you lose your job, get you banned from the airwaves, pelt you with milkshake, and now even violently assault you on a protest. Perhaps this is all, in the Guardian’s words, not violence at all, but just comeuppance for the ‘purveyors of hate’ – which is basically everyone who disagrees with the Guardian.

The violent attack on Andy Ngo wasn’t just a handful of extremist idiots assaulting a journalist. It was worse than that. It was proof that the era of PC intolerance is entering a new phase, one in which you can now be actually assaulted for having the wrong views, with the approval of an elite who will say: ‘That isn’t violence – it’s just what you deserve.’