The Democratic Football Lads’ Alliance is more anti-fascist than the Corbynistas who want to shut it down. 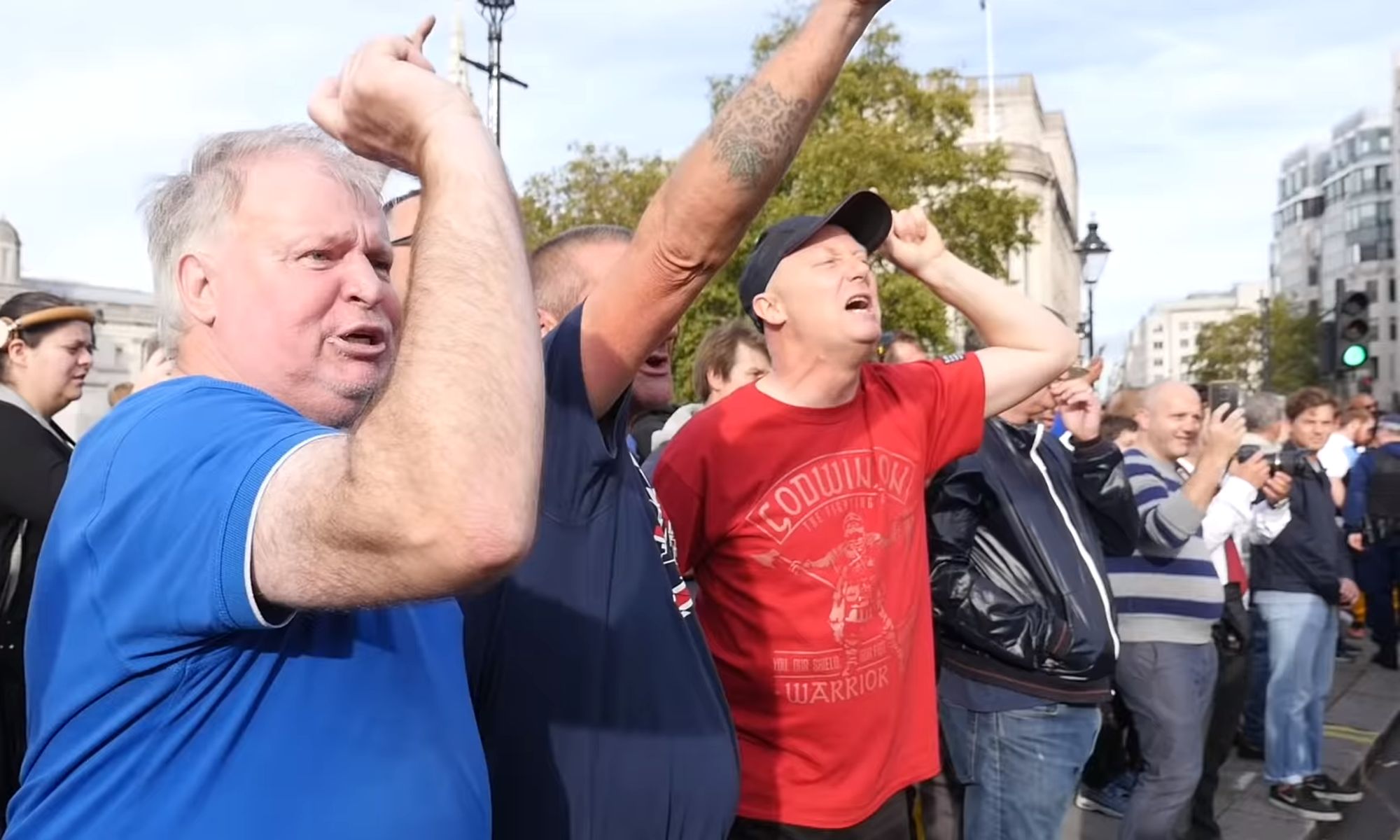 Who was really marching against fascism in London on Saturday afternoon? The Democratic Football Lads’ Alliance (DFLA), which took to the streets to register its fury with radical Islam? Or the self-styled anti-fascist movement that gathered to block the DFLA, and which even chanted ‘No pasaran!’ as if it was the 1930s again and this was a replay of the Battle of Cable Street that pitted working-class radicals and Jews against Moseley’s fascist brownshirts?

In truth, neither side was. Fascism is a vastly overused word these days. It now means, as Orwell predicted it would, little more than movements or people ‘I disapprove of’. Most people who call themselves ‘anti-fascist’ are really just being vainglorious, fantasising that their uptight agitation against whatever political movement is currently getting their goat puts them on a par with the men and women who fought on Cable St or who trekked to Spain with the International Brigades.

But here’s the thing: the DFLA has more claim to have been opposing fascism on Saturday than do the largely Momentum-derived leftists who turned up to rage against the DFLA.

‘Nazi scum off our streets!’, the counter-protesters yelled at the DFLA. And yet the willingness of these largely working-class football fans to stand up to a murderous religious extremism that has claimed the lives of hundreds of working people in Europe over the past five years at least puts them in the ballpark of anti-fascism. Their opponents, meanwhile, come off as censorious, intolerant and starkly unwilling to permit any kind of discussion about new forms of illiberal and undemocratic violent extremism — not traits one would normally associate with anti-fascism.

It split from the Football Lads’ Alliance (FLA) last year. The FLA was founded in 2017 to unite the ‘football family’ against terrorism. It had its first demo in June 2017, at which thousands of fans, many decked out in their team colours, descended on London Bridge to express their anger at the Islamist slaughter that had taken place there just weeks earlier (in which eight people were killed).

In October 2017, an estimated 10,000 fans brought Park Lane to a standstill. They held wreaths in the colours of the clubs and listened as various speakers railed against hateful extremism and the barbaric attacks at the Manchester Arena, Westminster Bridge and London Bridge that took place last year.

‘Our motto is no racism, no violence’, the FLA said. It said it just wanted to raise the issue of violent Islamist extremism — an issue it believes too many people are scared to talk about for fear of being branded ‘Islamophobic’ by a media and political class that would rather not confront the social tensions stoked by the separatist ideology of multiculturalism.

Naturally, the FLA and DFLA have been branded… Islamophobic. As if to prove their belief that it is impossible to have a frank discussion about Islamist extremism, many commentators took one look at these white (shudder), working-class (eurgh) protesters and called them racist scum.

Because if a portly bloke and his wife, both in West Ham tops, attend a protest, they must be fascist filth, right? That’s the view of the university-educated, woke new left, most of whom have never even met a football fan, far less seen 10,000 of the strange creatures take to the streets.

Were there some questionable elements on Saturday’s march? Of course. As there were on FLA marches. A photo shows one of the attendees doing the Nazi salute. This has been held up as evidence that the whole movement is Nazi. You would think that Corbynistas of all people would recognise how unfair it is to write off an entire political group on the basis that some of its adherents hold fascist-like, Jew-fearing views.

The DLFA itself doesn’t like some of the people it attracts. As one supporter said on Saturday, ‘I detest some of the people I’m walking with’, especially if they ‘hate people because of the colour of their skin’. But such internal discomfort with far-right elements counts for nothing in the eyes of the self-styled anti-fascists — to them, all these ‘uncultured’ people are Nazi scum.

This very response to the DFLA shows why it came into existence in the first place: because it has become so difficult to talk openly about Islamist violence and about the things that might be stoking it, including divisive multicultural policies and the unwillingness of British society to state clearly what its values are and why migrant communities should embrace those values.

There is now an armoury of defamatory terms that are used to stymie any discussion about divided Britain. This is the era of ‘Don’t look back in anger’, where citizens’ only role in response to Islamist violence is to lay a flower, shed a tear, and then get back to life as normal. Anyone who deviates from this paternalistic pre-written script can expect to be branded a trouble-maker, a threat, a 1930s throwback.

And that is precisely why the FLA and the DFLA were set up — to create the space for people to come together to say what you aren’t meant to say: ‘I am concerned about radical Islam. I am worried about fractured Britain. I’m not convinced mass immigration is a good idea.’ These football lads’ movements are a direct product of the chilled, censorious climate our political and media classes have created around issues of extremism and division.

The dark irony of those cultural-studies radicals screaming ‘Scum!’ at the DLFA on Saturday is that that march and the other marches are the entirely predictable consequence of the intolerant culture these radicals themselves helped to create. It is their own elitist preference for protecting Islam from any criticism or rebuke over allowing ordinary citizens, especially working-class ones, to express their concerns about the state of Britain that made the DFLA necessary.

These so-called anti-fascists are nothing of the sort. Anti-fascists do not protect violent extremism from debate and opposition. They do not try to shut down discussion about social tensions. They do not write off as ‘scum’ people who hold wreathes for the children slaughtered at a pop concert. These anti-fascists are just dressing up in the moral garb of the Cable St warriors of the 1930s in order to pursue the low and reactionary enterprise of shutting down communities that want to challenge violent extremism in 2018. They cynically borrow the moral authority of anti-fascist movements of the past to attack those who want to talk about what some call ‘Islamo-fascism’ today.

There are many problems with the DFLA. It has too many EDL people and attitudes. It needs to work harder at keeping racist elements out. It needs to ensure that its concerns about extremist violence committed by Muslims doesn’t translate into a loathing of all Muslims. But right now, this movement, with its open defiance of the debate-strangling culture of ‘Don’t look back in anger’, has more claim to be confronting fascism, or at least something like fascism, than do the Corbynistas and commentators who are writing it off as Nazi scum.