Chemnitz and the politics of fear

Both the far right and its critics are guilty of political hyperbole. 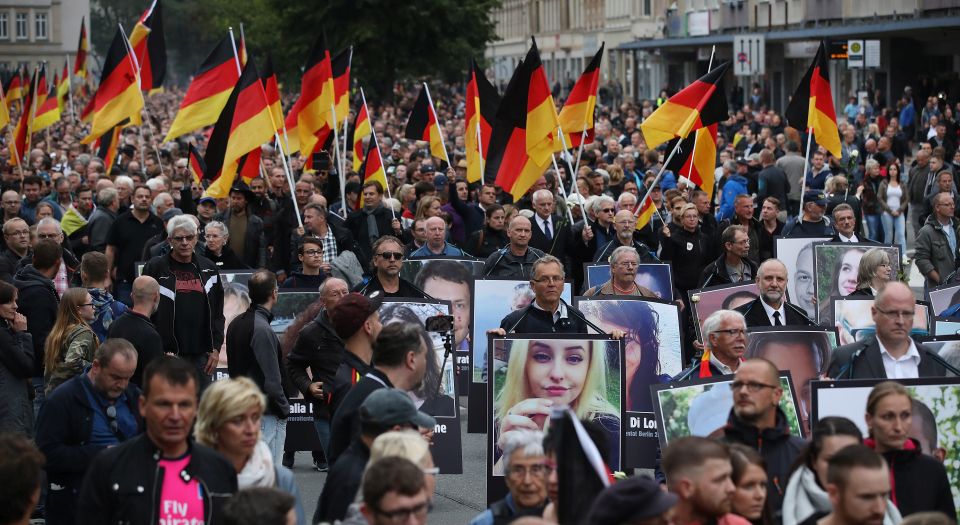 ‘Riots of this sort must not be allowed on any square or any street’, said the German chancellor Angela Merkel last week. She was referring to the protests taking place in the eastern city of Chemnitz. They exploded after one man was killed and two others seriously injured in a knife attack at a street festival. Protesters took to the streets when it was reported that the alleged stabbers, two young men, were refugees from Iraq and Syria. Several right-wing groups, including the anti-immigrant Alternative for Germany (AfD), called on people to demonstrate against Ausländerkriminalität – foreigner criminality. Official estimates say 6,000 people took to the streets, with some engaging in violence against ‘foreign-looking’ passers-by and the police.

The unprecedented size of the protests has confirmed many liberal commentators’ worst fears. The federal State of Saxony, where Chemnitz lies, has long been branded the home of the far right in Germany. It is the base of the anti-Islam Pegida movement, which has been organising demonstrations since 2014. It is also a federal state in which the AfD did very well in last year’s general election, winning 27 per cent of the vote. The latest protests are seen by many liberal commentators as another slide down the slope towards fascism. ‘This is a new and dangerous situation for the whole republic’, said political scientist Hajo Funke. In a piece for the Guardian, a German journalist argued that racism has steadily become part of mainstream political discourse in Germany.

There is indeed something unsettling about the protests, but not in the way these commentators suggest. If the reaction of the far right to the knife attacks was hysterical, then so has been the response of some liberal observers to the protests. One side conjures up images of knife-swinging asylum seekers. Yet fatal fights at festivals have occurred before. In normal circumstances, such an incident would be seen for what it is: a tragedy best dealt with by the police and courts. There is no question that right-wing groups from across Germany, not just Saxony, have jumped on this particular knife attack in an opportunistic way. And yet the other side, those criticising the far right, is equally guilty of exacerbating the situation. By presenting the whole of Saxony, and everyone who is concerned about immigration, as a ‘neo-Nazi darknet come to life’, they have also engaged in fearful politics and have avoided addressing the real issues and concerns.

The events of last week confirm there is an unresolved tension around the issue of immigration. Yet the liberal-left just doesn’t want to hear of it. The Guardian piece smugly states: ‘Locals tell reporters that they have nothing against foreigners, but feel unprotected by the state… But what do these frightened people actually fear? Crime rates are falling, not rising.’ It is wrong to say people’s fears are entirely imaginary. There have been other incidents with knives. Though criminality among immigrants is low, police statistics do show there has been an increase, in particular in relation to sexual offences and homicides: in 2016 there were 44 cases of homicides committed by immigrants, though 38 of the victims were also from an immigrant background. In June, the brutal murder of a 14-year-old girl from a Jewish background by a young man from Iraq shocked the entire country. In the Chemnitz case it has been revealed that the main suspect had been convicted before and was on parole for dangerous assault. The constant downplaying of these facts by certain ‘pro-immigration’ journalists has made some people angry and distrustful.

‘There is no place for this type of violence’, numerous politicians have said in response to the Chemnitz protests. This also speaks to an unwillingness to address the perceived challenges of immigration or to try to convince people of the benefits of immigration. Instead it smacks of a desire to stifle and contain unpleasant protesting. The chants of ‘Out, out, out!’ may have been obnoxious but they must be tolerated as an expression of people’s anger. Observers’ claim that the state has been too soft on the far right is not true. Ten of the Chemnitz demonstrators have been criminally charged for performing the Hitler salute. But prohibitions and bans won’t help. If people feel that the only space in which they can voice their concerns is on a rowdy protest, then something is seriously wrong.

‘We mustn’t leave democracy to the street’, the German president Frank-Walter Steinmeier said last week. Actually, Saxony, the largest state in the former Eastern Germany, has a long and constructive history of people taking democracy to the street. It was in this state where protests led to the fall of the Berlin Wall in the late 1980s (in the cities of Leipzig, Dresden and Chemnitz). Today, people are still interested in politics and they will not accept being told what to think. And that is a good thing. Chemnitz shows how important it is to open up the debate about immigration, and to create more space, not less, for the expression of concerns or the asking of questions.