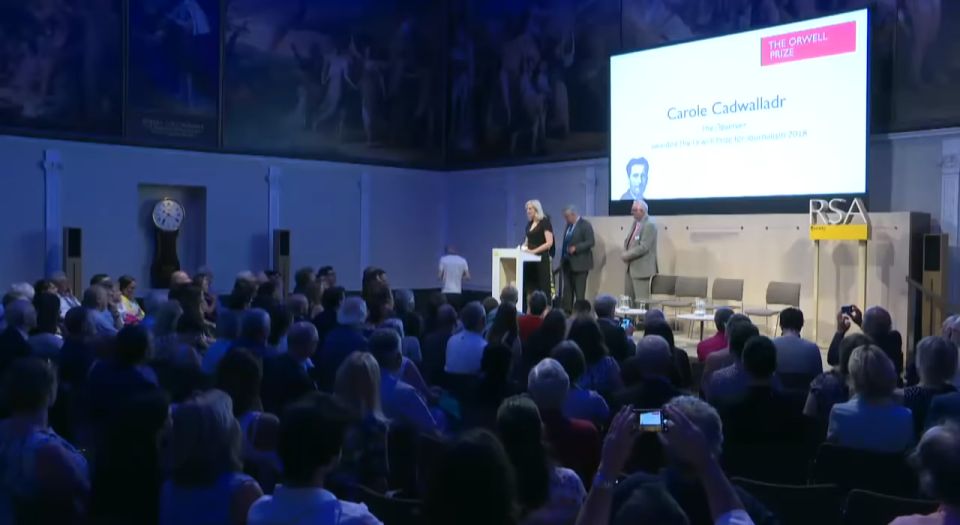 No one ever thinks of themselves as a conspiracy theorist. Even the people who believe 9/11 was an inside job. Even those who think the Rothschild family puppeteers global politics. They think they are being critically minded. They think they have bravely discovered what the rest of us – sheep that we are – have failed or refused to see. So it isn’t surprising that Carole Cadwalladr and the media cheerleaders of her breathless Brexitphobia also don’t think of themselves as conspiracy theorists. But that is what they increasingly look like to many of us.

Last night, Ms Cadwalladr won the Orwell Prize for journalism. If that prize wasn’t discredited enough when it was awarded to Johann Hari for stories he partly made up, it surely is damaged beyond repair now that it has been awarded to someone whose journalism sometimes reads like the rumour-mongering you normally find in the internet underbelly. Ms Cadwalladr’s features for the Observer have many of the hallmarks of conspiratorial thinking. They have proceeded from a conviction that a vast conspiracy of businesspeople, internet mind-manipulators and Russian officials conspired to bring about Brexit, probably with the aim of damaging Britain’s standing in the world. And when your starting point is that there is a hidden, sinister conspiracy out there, you will tend to see it everywhere, even where it clearly does not exist.

The language of the conspiracy theorist peppers Ms Cadwalladr’s commentary, as she has flitted between saying that tech gurus (Cambridge Analytica) manipulated us all to vote Brexit and arguing that Russia worked with Leave.EU to ‘deliver’ Brexit. She has written about ‘the elite dining society’, made up of journalists and politicians, that is really a ‘secret club of people who rule Britain’. Brexit was brought about by a ‘shadowy global operation’, she says. To the conspiracy theorist, everything is shadowy. She writes endlessly of ‘dark money’ and its deployment to the end of ‘hijacking’ British politics so that it might be steered in a direction that will benefit hidden wealthy and political players. This is the stuff of deep, winding internet discussion threads. The idea that secret clubs that exist in the shadows of society are ruling the nation is at the core of every conspiracy theory.

More striking still is how often Cadwalladr admits that she doesn’t know who is behind all this. Her journalism is littered with caveats such as, ‘We can’t be sure’. ‘We are in the dark about so much’, she admitted on the matter of Leave.EU’s ‘relationship to the Russian government’. On claims – or rumours – that Arron Banks, a big funder of Leave.EU, struck a gold deal with Russians, and that this might have been one of the reasons he pushed for Brexit, Cadwalladr asks: ‘Did the deal take place? The gold deal that Yakovenko made the introduction for?’ Erm, shouldn’t she find that out? Before writing about it? Isn’t that what a journalist does? ‘What we don’t know… is whether this is collusion’, she wrote of Leave.EU’s relationship with Russia, after deploying thousands of words, and generating thousands of tweets, hinting at such collusion!

There are two striking things about Cadwalladr’s posing of questions that she cannot answer. The first is that this will look familiar to anyone who has looked into conspiracy theories. The seemingly bracing question often takes the place of a provable or proven claim. ‘Did Elvis fake his death to escape stardom?’, they’ll ask in order to plant that possibility in your head without doing anything whatsoever to prove it. And the second striking thing is that the editors seem to have been napping on the job. An editor would normally say, ‘Carole, hi, can you find out if there was collusion? Or if that gold deal happened? And if it had any link to Brexit? We need that stuff.’ But this time, editors at the Observer seemed content to let Cadwalladr and others smear Brexit with whispers, suggestions and questions. Has someone just been awarded the Orwell Prize as much for what they didn’t find out as for what they did?

More seriously, the kind of journalism the Observer has been producing on this issue has contained three key ingredients of the conspiracy theory. The first is the spider-web fallacy – the idea that just because people know each other and have worked together they must therefore be engaged in The Conspiracy. As Jerry Goodenough wrote in ‘Critical Thinking About Conspiracy Theories’: ‘Conspiracy theories [often] proceed in this fashion, weaving together a web of conspirators on the basis of who knows who. But personal acquaintance is not necessarily a transitive relation.’ This is what Cadwalladr’s belief that Leave.EU worked with Russia to make Brexit happen looks like to some of us: a classic case of spider-web fallacy, where we extrapolate from a personal or business relationship to say, ‘There! They communicated! This proves they were working together on the big conspiracy I’m convinced exists.’ (In this case that Russia bought Brexit.)

The second ingredient is the idea that ordinary people have somehow been brainwashed or led astray by the organisers of the conspiracy. Every conspiracy theorist sees himself as superior to ‘the sheeple’, whose minds have somehow been got at. Cadwalladr and some of her supporters seem convinced that us plebs have had our minds taken over. She has written reports quoting people who say the hidden elites have declared ‘psychological warfare’ on us. They have turned social media into a ‘mindfuck tool’. Her features reveal that ‘science’ is ‘used to manipulate emotions’. A New York Review of Books piece about her work discussed ‘the machinations of mind control’. Guys. Come on. Add a meme featuring the slavish masses staring into a pyramid with an eye on it and you have a classic conspiracy theory here.

And the third ingredient is the idea of the cover-up. Or at least that the mainstream media – unlike the Observer! – is for some reason not reporting THE TRUTH. Witness Cadwalladr’s increasingly strange tweets about the BBC and how it has apparently messed her about. Is the BBC in on it too? Probably. Cadwalladr supporter Nick Cohen even suggests the BBC’s lack of interest in this story is treasonous. This is another trait of the conspiracy theory: glimpse at far-right online threads and you’ll see that virtually every other word is ‘treason!’. The treason of the elites who have succumbed to Russian power, Islamic power, Jewish power, or whatever. Here’s a simpler explanation for why the BBC hasn’t led with this story: it likes to know all the facts before making sweeping, mad-sounding claims?

Here is the bottom line: the Brexit meltdown lobby has not offered one sliver of evidence for their belief that Russia bought Brexit and internet companies twisted voters’ minds to make us vote Brexit. Not one. All they’ve shown is that some British businessmen had a friend in the Russian embassy and Leave campaigners, like Remain campaigners, used social media to drum up support. Everything else is, I’m afraid, a conspiracy theory. It is testament to the post-Brexit demise of good sense among the chattering classes that they now award prizes to journalism like this.