Why the political class hearts the NHS

Labour and the Tories are two blind men fighting over a pair of NHS specs. 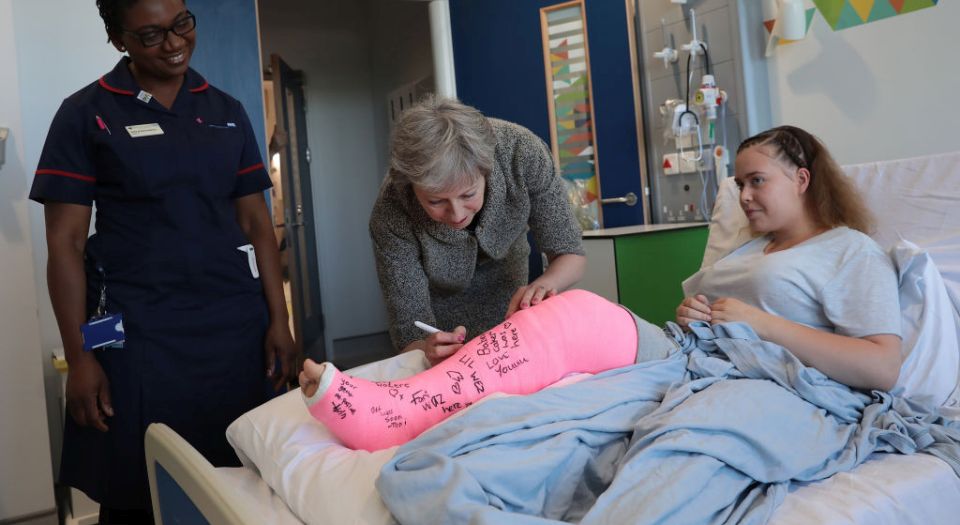 What best captures the poverty of vision of Britain’s political class? It is not the fraying national infrastructure. It is not even the legislative focus on our sugar intake or undergarment happy snappers. No, what really shows up the political class’s dearth of intellectual and moral verve is its obsessive-compulsive deification of the NHS.

The NHS, after all, is a public service. An important one – and, insofar as it is free at the point of medical need – a necessary one. But a service for citizens nonetheless. A service, that is, like education. Or the London Underground. We as citizens don’t want to worship it; we want to be served, and served well, by it. Yet over the past few decades, the NHS has been turned into an object of veneration. Not necessarily by the public, but by politicians. It has become that which all parties must support, just as subjects once had to swear loyalty to the king. Its perpetuation has almost become the sole legitimation for the British state. And, more recently, the political class has even used the NHS as both a justification for both Brexit and Remain.

The invocation of the NHS, rather than the £350million figure itself, was always what was most troubling about Vote Leave’s infamous Brexit bus poster. This, remember, was the official Brexit campaign, the campaign led by the likes of supposed big Brexit hitters Michael Gove and Boris Johnson, the hydra-headed beast of Remainer nightmares. And yet the most exciting claim it came up with was the extent to which leaving the EU might benefit the NHS. Not Brexit’s potential to regalvanise democracy, to realise popular sovereignty, to open up unprecedented opportunities for making Britain anew. No, the flagship reason for leaving the EU, emblazoned on Vote Leave’s campaign bus, was the opportunity to pump a few extra quid into the NHS.

And this Sunday, we saw the same thing again, this time from the prime minister, Theresa May, who revived that hotly and tediously contested claim that money that no longer needs to be paid to the EU can be fed to the NHS. This, she said, will mean an extra £20 billion a year for the NHS by 2023, an average annual budget rise of 3.4 per cent (close to the 3.7 per cent annual rise the NHS has, on average, received since 1948). She called it ‘the Brexit dividend’. Her critics called it bollocks. Or ‘tosh’, as Sarah Wollaston, the Tory chair of the Commons Health Committee, characterised it: ‘The Brexit dividend tosh was expected but treats the public as fools.’

More annoyed still by May’s ‘birthday gift’ to the NHS, in its 70th year – a telling reversal of the roles of service and served – were those roughly on the Remain and Labour side of the argument. Shadow chancellor John McDonnell called it a ‘publicity stunt’, and doubted whether the ‘government is genuinely offering [the funding]’. But the reason Labourites were annoyed is revealing. They don’t object to the promise of increased funding for the NHS. They don’t even object to the suspicion, confirmed on Monday by health secretary Jeremy Hunt and later by May herself, that, in lieu of a mythical Brexit dividend, extra NHS funding will necessitate an ‘increased burden of taxation’. No, on this, they are in complete and utter agreement with May. Indeed, Labour, with its largely middle-class, professional and public-sector support base, have turned raising health-service expenditure into a political mission, with the prospect of ‘taxing the rich’ (or the top five per cent as they refer to them now) enough to prompt Corbynistas to speak in tongues.

What irks them is the fact that the Tories were trying to present themselves as the party of the NHS. Whereas, as Labourites want everyone to know, it is they who have direct access to the divine spirit of Bevan, Attlee and the other apostles of the NHS. As Corbyn told Labour Remain supporters in the run-up to the EU referendum, ‘The NHS is Labour’s proudest creation’. And now, two years on, May’s Tories are acting as if they also have some claim on the NHS – that is, as if they also can associate themselves with the one source of moral authority in British national life.

And that is the problem: the NHS is not a public service whose funding, functioning and point can be debated. Rather, it is what Queen, God and Country used to be. It is a source – perhaps the only one – of pride, devotion and national coherence. It is an object of political worship or, as it is otherwise known, state expenditure. That is why it was the culmination and centrepiece of Danny Boyle’s London 2012 Olympic opening ceremony, why this week the Financial Times declared it ‘one of the few institutions that still unites the country’, and why our political class, across its ersatz 1970s-style divide, is united in its desperation to be cast as the NHS’s voice on Earth. Because the NHS is less a service than it is a spirit. And as such, its mere invocation provides today’s politicians with the sense of authority and mission they otherwise lack.

Few politicians question whether simply throwing money at the NHS is the best way forward. Or dare suggest that there are some things the NHS does, especially its intrusions into people’s lifestyles, that are detrimental to our political and social health. Or point out that its excessive managerialism and target-setting lead to routinised carelessness. Because, in the estranged world of the political class, invoking the NHS is seen as just about the only way to speak to us with any authority. The NHS is now the answer to nearly every party-political question. Why are we raising taxes? To support the NHS. Why are we leaving the EU? To benefit the NHS. Why are we better than them? Because we love the NHS more. All of which is why we are now party to the unedifying spectacle of Labour and the Tories acting like two bald men fighting over a comb. Or better still, two blind men fighting over a pair of NHS specs.