Zuma was not an aberration

He embodied all that is wrong with ANC rule. 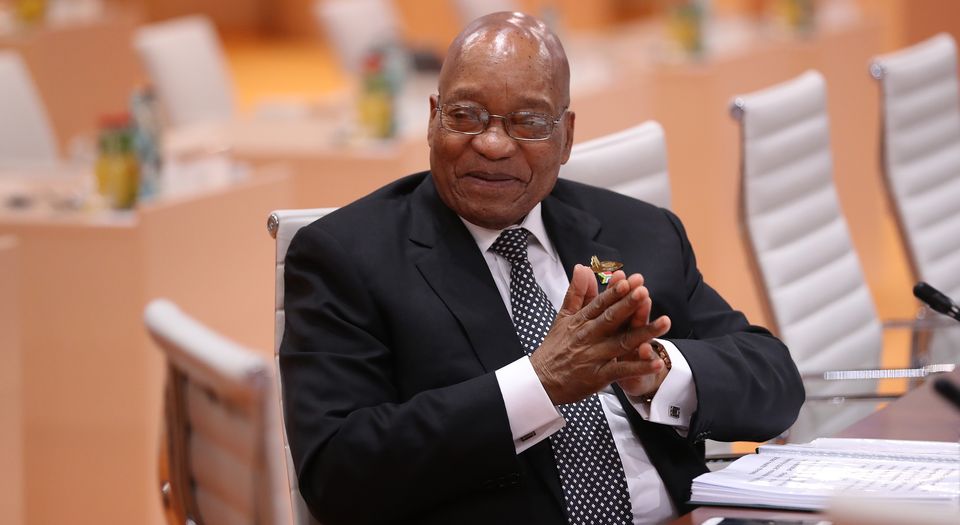 So, it’s farewell to Jacob Zuma, South Africa’s discredited president. Few will shed a tear for a man whose arrogance, greed and corruption have made him a pariah almost on the level of former Zimbabwe president Robert Mugabe.

Zuma’s removal from office has been heralded by the world’s media as being as significant as the end of Apartheid itself. With the debonair Cyril Ramaphosa at the helm, South Africa has a chance once again of realising Nelson Mandela’s Rainbow Nation vision, they say. Clean Cyril can now attack government corruption, win back international confidence, reduce South Africa’s youth unemployment, and address the widening inequality chasm that is the result of the African National Congress’s 27-year rule.

But the world’s media may as well announce that Father Christmas exists. The idea that the end of Jacob Zuma is the ‘End of an Error’, as the South African cartoonist Zapiro put it, the end of an era of ‘state capture’ by a cabal of corrupt government officials and shady foreign businessmen, is disingenuous and delusional.

It’s disingenuous because it suggests that Zuma was an aberration, a divergence from the true path set out by Mandela and the ANC after the fall of Apartheid. Zuma was nothing of the sort. He was continuity, a logical outcome of ANC politics. And it’s delusional because the only real ‘state capture’ that has happened in South Africa was the ANC’s capture of state power at the end of Apartheid.

The ANC’s removal of Zuma is nothing more than a desperate attempt to address its dwindling support among the majority of black South Africans, ahead of next year’s general election. The system that brought Zuma to the fore will continue to operate. We will certainly see a change in form, but the content of ANC policy will remain the same.

During Zuma’s long resignation speech he acted like a seven-year-old who had broken his parent’s crystal water jug. Despite all the evidence pointing at him, he proclaimed his innocence, as if he was blaming the cat. He then asked why this was happening now: what had he done to force his party to turn its guns on him after all this time? And he had a point.

After all, this is the man who was facing 800 or so corruption charges before he was even elected president. This is the president who survived eight votes of no confidence by retaining the support of the very men and women who have now turned on him. And remember, the supposedly clean Cyril Ramaphosa was part of Zuma’s government, a government ostensibly controlled by the wealthy Gupta family. Ramaphosa remained in its second-highest position, even as Zuma and his kleptocratic cabal hired and fired ministers and deputy ministers.

The corruption of the Zuma government was a foregone conclusion. But it had little to do with Zuma’s moral compass, or lack thereof. This kind of corruption is inherent in the politics of the ANC and a logical outcome of the consensus underpinning all South African politics: namely, that there is no alternative to the market.

The ANC’s historic aspiration has always been to enable the emergence of a black capitalist class in South Africa. It only ever paid lip service to socialism to win support from the black majority. Just recall Mandela’s riposte to the critics of the ANC’s Freedom Charter of 1955 who accused the ANC of unbridled communism, due to its demand for the wealth of the country to be returned to the people. Mandela made it clear that the anti-monopoly policies in the Freedom Charter were really intended as a boost for excluded black entrepreneurs: ‘The break-up and democratisation of these monopolies will open up fresh fields for the development of a prosperous, non-European bourgeois class. For the first time in the history of this country, the non-European bourgeoisie will have the opportunity to own, in their own name and right, mills, factories, and trade and private enterprise will boom and flourish as never before.’

When the ANC accepted the negotiated settlement that brought the end of Apartheid, it accepted constraints that essentially kept the socio-economic structure of South Africa intact. This commitment to ensuring the survival of the capitalist economy meant initially accepting white minority capitalist control, and its attempts to realise its goal of developing a prosperous black capitalist class brought tensions to the fore.

The jettisoning of the Reconstruction and Development Programme (RDP) in 1996 in favour of the Growth, Employment and Redistribution (GEAR) strategy marked a profound shift. The ANC shifted from a model of development that sought to reconcile participatory democracy with state-led development to a model of development that sought welfare receipts from a growing capitalist economy. The centrepiece of the strategy was to use the state’s procurement spend to bring about radical economic transformation. This was not nationalisation, but the creation of a new black-owned economy.

The problem, however, was that the constitutional and legislative environment the ANC had accepted constrained its ability to manoeuvre. Bidders for state contracts, for example, had to satisfy more conditions than simply being black businesses. Price and experience came into it as well. The blackness of firms was not a sufficient condition for securing contracts from the state. White-managed and white-owned businesses had the upper hand. They had more experience than emerging black companies, were better capitalised, and, moreover, could front their bids with black ‘empowerment partners’ to circumvent racial conditions. The formal rules were unsurprisingly rigged in favour of white businesses against emerging black-owned businesses.

After Zuma replaced Thabo Mbeki as president in 2008, the government became heavily dependent on the use of the procurement programmes of state-owned enterprises to redistribute wealth to black businesses. Essentially, the state and government became a massive tender-generating machine. The value of goods and services that government purchased, largely from the private sector, grew to between 400 billion and 500 billion rand a year.

This represented the near complete outsourcing of government’s core functions. And as the government has done less and less, the ability of personnel, ministries, departments, agencies and private entrepreneurs to feed off this opportunity has grown. This is what has led to all the corruption, the shady deals not only between Zuma’s family and the Guptas, but across all echelons of the ANC in central and provincial government.

The reality is that the ANC’s ambition, the creation of a black capitalist class, could not have been achieved in any other way. This is not an aberration of post-Apartheid capitalism — it is the very condition of its operation. This is why not much will change under Ramaphosa.

And we should remember how Ramaphosa himself fits in with all of this. When he lost to Mbeki to be the successor to Mandela, Ramaphosa resigned his political posts and went into business. With his formidable connections and negotiating skills he was one of the first to benefit from the ANC government’s black economic empowerment (BEE) policies, building an empire in mining, energy, property, banking, insurance and telecoms.

His outfit, Shanduka Group, secured him the McDonald’s SA deal and a 70 per cent stake in a South African Coca-Cola bottling outfit. With investments said to be worth 1.55 billion rand ($224million), Ramaphosa is now one of the wealthiest men in South Africa. He has enjoyed excessive wealth as most South Africans’ lives have deteriorated in the face of grinding poverty and a failing economy. This is what Mandela had in mind when he argued for the development of ‘a prosperous, non-European bourgeois class’ in South Africa.

Nor should we forget Ramaphosa’s role in the Marikana massacre in 2012. He called on the police to take appropriate action to end a strike at a mine owned by Lonmin, a mining company he was a shareholder of – it resulted in the cold-blooded murder of 34 strikers. This should be a reminder of what kind of person is now running South Africa. He is not a man of the people, a saviour who will behead the capitalist dragon and return the wealth of the people to the people. His commitment, as his own wealth expresses, is to the return the wealth of the people to only a small number of people like himself.

It is a depressing sign of how low expectations are of change in South Africa that the end of Zuma’s presidency is being compared to the end of Apartheid. This was perhaps best reflected in a recent Times leader, which said that Ramaphosa, unlike Zuma, ‘is already a millionaire so has little incentive to enrich himself’. How sweet and how delusional. The fact that he is a millionaire might mean there is little need for crude corruption a la Zuma and the Guptas; but to think that Ramaphosa will put the people first is simply fantastical.

The truth is that there is an essential continuity between Ramaphosa and Zuma. Zuma had to go because his ego, his self-delusion and his greed had become so great that he threatened the ANC’s future hold on power. It is the ANC’s capture of the state that’s at stake, not some shady hidden cabal. What we can be certain of is that any future economic growth would come at the expense of the black majority in South Africa.