External intervention has given rise to barbarism. 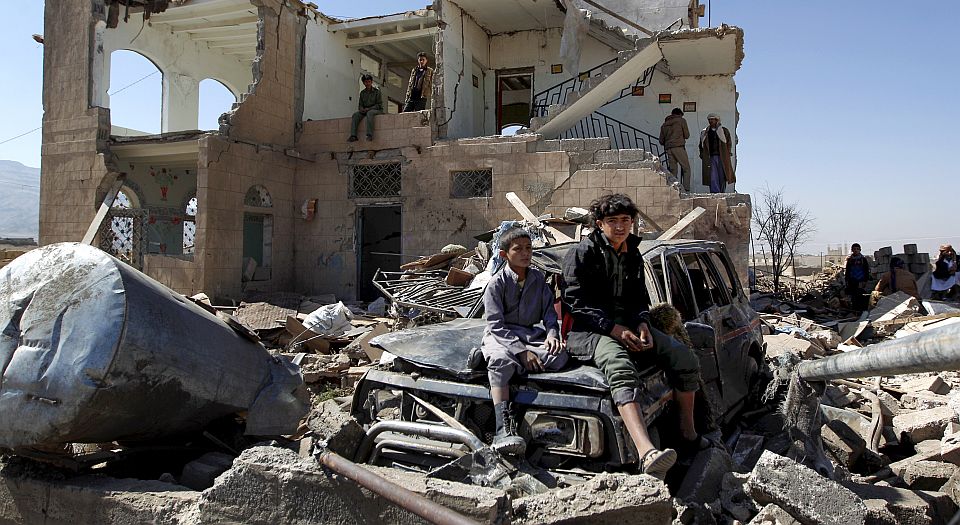 It is impossible to understand why Yemen finds itself in the horrific mess it does by looking at it solely as a Yemeni problem. Yes, the internal conflicts are real: the disenfranchised, frustrated Houthi rebels from Yemen’s north, now insurgent, have, as Shias, long been in opposition to Yemen’s central state, which has been accused of favouring Sunnis. And ever since Yemeni unification in 1990, the south has harboured secessionist dreams, which are now weaved in with the increasing presence of Islamists, both al-Qaeda and ISIS, in south Yemen’s midst.

But those internal conflicts, those social and political dynamics, have been developed and mediated by actors external to Yemen. So the Houthis have been backed, it seems, by Shia Iran and its Lebanese client militia, Hezbollah. The Yemeni state, meanwhile, has been propped up by Sunni Saudi Arabia and its Gulf State allies. Not that this is just a regional conflict being fought in and through Yemen’s internal actors — it is also international. So, Saudi Arabia has been conducting its bombing campaign since 2015 with the weapons and support of both the UK and the US, while Iran can count on the support of Russia. And it is this internationalisation that has fuelled and entrenched the conflict, always raising the stakes, pushing certain Yemeni actors forward, while attempting to annihilate others.

This internationalisation of a local problem, this transformation of a civil tension into a regionally powered proxy conflict, was captured in the killing last week of Ali Abdullah Saleh, the man who had become the president of what was then North Yemen in 1978, before leading the whole of Yemen following its unification in 1990, until he was deposed in 2012.

As everyone who has read the obituaries now knows, Saleh’s step-down from the presidency in 2012 was not the end of his political role. Far from it: from that point on, he and soldiers loyal to him allied with his erstwhile enemies, the Houthis, and fought an insurgency against the newly installed government of his one-time deputy, Abdrabbuh Mansur Hadi, and his Saudi backers. That was until last week, when Saleh made yet another spectacular about-turn, announcing: ‘We will open a new page for [Saudi Arabia], a new dialogue. What is happening in Yemen is enough. We vow to our brothers and neighbours that, after a ceasefire is in place and the blockade is lifted… we will hold dialogue directly through the legitimate authority represented by our parliament.’

In other words, Saleh betrayed the Houthis in an attempted rapprochement with those who have subjected Yemen to a two-year-long aerial bombardment. Although the Houthis claim that Saleh was killed by a government militia, it seems likely, given the anger Saleh’s volte face prompted, that the Houthis effectively executed him. Yet what is revealing about this episode is not so much the manner of his death or the identity of his killers. No, it was that Saleh was not addressing Yemenis. He was not addressing Hadi and the government. He was not even switching allegiance from one Yemeni community to another. Rather, he was addressing himself to an external actor – the Saudis. He was seeking a solution to Yemen’s situation, and no doubt a future for his own political career, outside of Yemen, in the House of Saud.

And if you believe that a community’s affairs, a nation’s future, can only really be decided upon and determined by the people themselves, in this case the Yemenis, then there is something deeply remiss here. It shows once again that Yemen’s fate, even for those directly involved in the fighting and slaughter, as Saleh undoubtedly was, does not appear to lie in Yemenis’ warring hands. It is to be decided over there, in Riyadh, and beyond it, up on Capitol Hill and down Downing Street. It is to be decided upon not by the people, but by those external to them.

Which is sadly, self-defeatingly true. The mess in Yemen, as in the plethora of other Middle Eastern conflicts over the past two decades, may have started out as the product of an internal revolt against the decrepit corrupt regime of Saleh (long the beneficiary, thanks to the ‘war on terror’, of US backing). Indeed the uprising against Saleh in Sana’a early in 2011, in which scores of student protesters were killed, was one of the first stirrings of the Arab Spring. But, as with the other Arab Spring revolts, it was very soon stifled by international intervention. By the end of 2011, the Saudi-dominated Gulf Cooperation Council, and the US and United Nations, had installed Hadi as the new president, pending an election in which he was the only candidate.

The rationale was straightforward enough: Saudi Arabia wanted to stablise a volatile situation on its border, and the US and the UK et al were willing to support their ally and trading partner. But they did so by imposing a ruler from without, a ruler whose legitimacy came not from any semblance of popular Yemeni support, but from Saudi patronage and international sponsorship. Little wonder one Yemeni government employee was moved to remark to a reporter that ‘it’s like one mafia replaced another’. A Houthi sympathiser was equally as cynical about the Hadi appointment: ‘Has anything good come out of Saudi Arabia in Yemen? Outside interests generally never serve Yemeni interests.’

We know what has happened since. Hadi, lacking domestic support, and therefore existing in something of a power vacuum, was easily forced out of Sana’a in 2014, and then out of Yemen itself by the Houthis. He now ‘rules’ in exile from Riyadh. But the external actors were, by this point, too deeply enmeshed in Yemen’s affairs to extricate themselves. Having provoked the Houthi rebellion, and their Iranian backers, Saudi Arabia had to respond, and so it did with a bombing campaign and border blockade that have left Yemen in dire straits. As Al Jazeera put it: ‘At least 10,000 people have been killed so far; seven million Yemenis face famine; and 18.8million people are in need of some form of humanitarian assistance. Cooking-gas prices have surged, while medicine and fuel are in short supply. According to the International Committee of the Red Cross (ICRC), 2.5million people have no access to clean water and one in every 12 is severely malnourished. The war has also displaced 3.3million people since its beginning.’

The figures are miserably stark. But what they fail to convey is how Yemen’s suffering is made even worse by the fact that its fate is entirely out of the hands of those affected. The fate of Yemen really does seem to rest with those who have done so much to barbarise it. Hence Saleh, who has spent the past six years fighting the Saudi-backed government of Hadi, makes not just a cynical, but also a desperate entreaty to Saudi Arabia and its Western backers. The tragic paradox here is that external intervention, the very thing that has helped to create the tragedy of Yemen, now appears as what it can never be: Yemen’s salvation. Because if Yemen is to stand any chance of peace and stability, that can only come from within Yemen’s fractured society. The Sauds, with the West whispering in princely ears, can stop the barbarity, but they cannot solve Yemen’s problems.