Winning the fight for abortion rights in Ireland 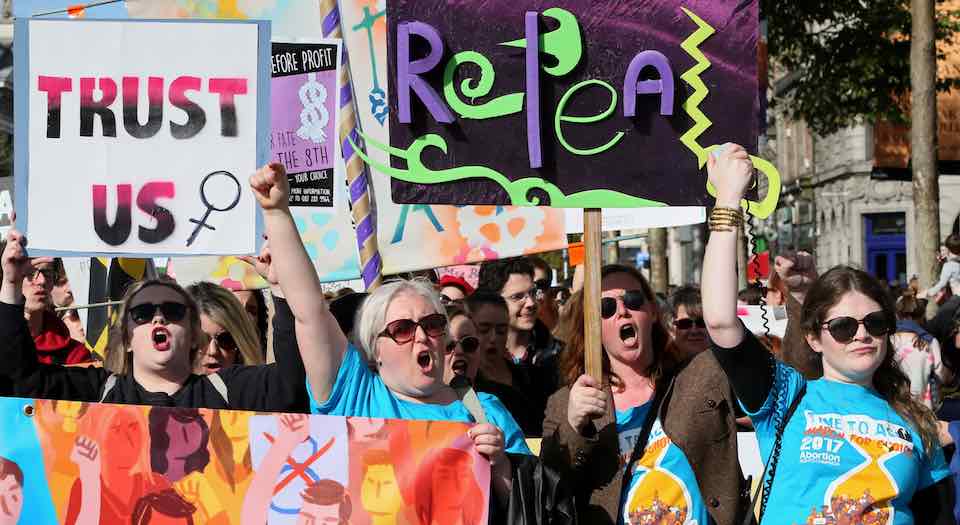 Ireland’s attitude to abortion rights is changing. Thanks to the efforts of pro-choice campaigners, and the discussion of abortion rights worldwide, Ireland is closer than it’s ever been before to liberalising abortion law and giving women bodily autonomy.

The Republic of Ireland has one of the most restrictive abortion laws in the world. Abortion is illegal, unless it can be proved to be necessary to save the life of the pregnant woman. The Eighth Amendment of the Constitution Act, signed into law in 1983, ‘acknowledges the right to life of the unborn’, meaning the foetus has equal rights to the woman.

The Eighth Amendment came as a result of lobbying from the active Pro-Life Amendment Campaign (PLAC), which started in 1981. Frightened by the liberalisation of abortion law in the UK, after the 1967 Sexual Offences Act, and the case of Roe vs Wade in the US, PLAC easily utilised the support of the Catholic Church, and the relative cowardice of the political class, to propose a referendum on a change to the constitution. The resulting 66 per cent vote in favour of the Eighth was a severe blow to the pro-choice movement.

But the law is now out of step with public opinion. According to an Irish Times and Ipsos MRBI poll, 70 per cent of Irish citizens would now vote to repeal the Eighth Amendment. This comes after the Citizen’s Assembly (a group of 99 randomly selected citizens charged by the partnership government to advise on constitutional issues and policy areas) advised that there be a referendum on the Eighth Amendment held next year.

This has worked to shake up the political class. After a slow response, and much humming and hawing from the Houses of the Oireachtas (Irish parliament), new Taoiseach Leo Varadkar has announced that there will be a referendum in the summer of 2018. This is brilliant. But whether the referendum will focus on repealing the eighth, or replacing it (which would only provide superficial change to the law) is yet to be seen. As Varadkar is giving little away, and rumours abound that both Fine Gael and Fianna Fail are considering calling a general election in an attempt to avoid a referendum, the fight for abortion rights in Ireland is far from over.

For this reason, it’s important that pro-choice groups in Ireland don’t get complacent. The same poll, which showed support for repeal, revealed that only 24 per cent of voters were in favour of legalising abortion on demand, and just 57 per cent support bringing Ireland in line with the UK, allowing abortion in cases of rape, fatal foetal abnormality and when there is a risk to the life of the woman. This means that Irish support for abortion is only just catching up with the very basic provision outlined in the UK’s 1967 act (which, as of this year, is 50 years old).

Why does this tiny island continue to hold such backward views on women’s bodily autonomy? A recent march in Dublin, organised by pro-choice movements, saw very impressive numbers. Thousands of women, most of them young, came out demanding that the Irish government repeals the Eighth Amendment. The protest made international news, and was supported by mass marches in London and across Europe. So what is it about the pro-choice movement which isn’t connecting with the wider public?

It’s a tricky one to answer, and, following the climate of censorship around Ireland’s recent referendum on gay marriage, it wouldn’t be surprising if most Irish citizens are reluctant about saying what they really think when it comes to abortion. But there are a few areas in which those of us on the pro-choice side can do to garner support, and push Irish abortion law into the 21st century.

Many of the slogans used by younger activists on marches like the recent one in Dublin involve statements like ‘keep your rosaries off my ovaries’. Hostility to religion is understandable among the younger generation. But ignoring the difference between city dwellers in Dublin and Belfast and Kerry farmers is a bad mistake. Religion is still an important part of many Irish citizen’s lives, and yet, as figures show, thousands of Irish women travel to the UK to access abortion every year. It’s wrong to assume that religion is the only barrier stopping Ireland from liberalising abortion law.

This is further proven by the fact that the majority of Ireland’s political class is hostile to abortion rights. None of the four main political parties favour implementing the Citizen’s Assembly’s recommendations on abortion. A bill proposed in March this year, aiming to reduce the penalty for an illegal abortion from 14 years in prison to a fine, was voted down by almost all of the TDs (MPs). Crucially, Sinn Fein, the supposedly radical party in Irish politics, abstained. Almost none of the Irish political elite are willing to stand up for Irish women’s bodily autonomy – this shocking fact should be shouted from the rooftops by pro-choice campaigners.

Finally, the unfortunate fact is that much of the argument for abortion rights has been tied up with identity politics. This is evident in campaigns run by some groups like Abortion Rights IE, which states that it recognises that ‘people who have wombs can have a gender identity along a whole spectrum’. If it’s difficult to convince people that women should be free to make their own choices about their own bodies, throwing in the idea that men get pregnant too is only going to confuse matters.

If we are to win the argument for abortion rights, it has to be made on the basis of good conscience, and a moral argument in favour of women’s freedom. For too long, Irish anti-abortion campaigns have claimed the moral high ground, mobilising people’s religious beliefs to make the argument that stopping life is wrong. It’s why the Eighth currently uses such loaded language, like ‘unborn’ and ‘mother’. Ireland is in the midst of exciting times, with change on the horizon. It’s now up to our pro-choice sisters to win the hearts and minds of citizens before the referendum next year, and join in with campaigns across the pond for the full decriminalisation of abortion. It’s not impossible, it simply takes making the argument for women’s bodily autonomy about choice, conscience and freedom. Irish women are as strong and independent as the rest of the world, it’s time Irish law recognised that fact.