The Mooch: a bit part in the Trump soap opera

The past week proved Trump is more than capable of humiliating himself. 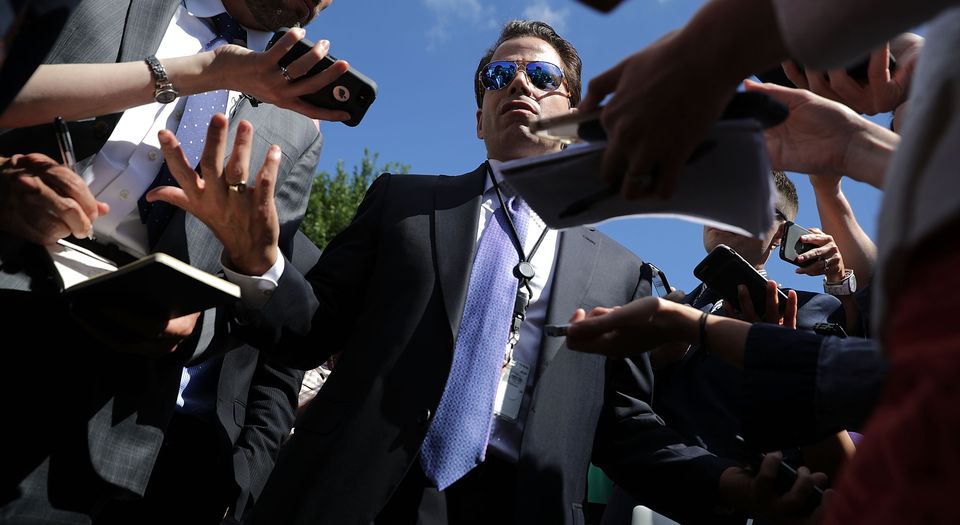 Farewell, Mooch. Those who enjoyed the comedic role this character brought to the reality soap opera known as the Trump White House were disappointed to hear of communications director Anthony Scaramucci’s departure yesterday, after a mere 10 days on the job.

But the Mooch managed to pack a lot of crazy into those 10 days. We met him in his initial press briefing, and saw a puffed-up Long Island hedge-fund manager creepily professing his ‘love’ for The Donald over and over (the same man he described as ‘another hack politician’ during the campaign). Appointed to a normally low-profile administration role, Scaramucci proceeded to act like Trump’s Mini-Me, vowing to ‘fire everybody’ only to find that he was the one getting the axe. And of course, he will be most remembered for his wonderfully demented rant to the New Yorker, in which he used vulgar terms to describe cabinet members Reince Priebus and Steve Bannon (as spiked is a family-friendly publication, I won’t repeat them here).

Scaramucci’s demise capped off a week of Trump palace intrigue, and came only hours after Trump himself tweeted ‘No WH chaos!’. The Mooch’s appointment led to press secretary Sean Spicer’s resignation. Then, Priebus was ousted as chief of staff. Then, John Kelly was named Prebius’s replacement, and Kelly’s first move was to have Scaramucci escorted out of the White House for good. This all followed Trump’s relentless public hounding of Jeff Sessions, the attorney general, and ongoing speculation that he would be fired next.

With Kelly installed as the new chief of staff, some are predicting the retired general will bring military order to the dysfunctional White House. Not likely. For a start, the Trump court manoeuvrings seem set to continue, with the ‘kids’ – Ivanka Trump and her husband Jared Kushner – still viewed as rogue actors. The praise of Kelly’s appointment also ignored the fact that the chief of staff is meant to be a political role, involving mediating with Congress and setting priorities. These are activities the relatively apolitical Kelly has no experience in. And most important of all, the chaos that reigns in the White House emanates from Trump himself, not from the staff around him. And there is no indication that anyone, including Kelly, can restrain Trump. Certainly, fellow military types in the administration – such as secretary of defence James Mattis and national security adviser HR McMaster – have not been able to stop Trump from doing things like tweeting about North Korea.

It seems that everyone who surrounds the impulsive and unpredictable president has to work around him. The same thing apparently goes for those outside the White House, too. Last week, Trump gave a strange, rambling speech to the Boy Scouts, bragging about his election day success and throwing in all sorts of bizarre stuff. (‘I saw him at a cocktail party, and it was very sad because the hottest people in New York were at this party.’) The Boy Scouts later apologised – on Trump’s behalf. Later in the week, Trump encouraged police brutality, telling New York police ‘don’t be too nice’ with suspects. The Suffolk County police had to respond to say they do not ‘tolerate the roughing up of prisoners’.

So long as Trump is in the White House, there will be some degree of disorder, and this will only invite infighting among administration officials. But this reflects a lack of clear political direction from the top, not a lack of military discipline. And while such internal dysfunction clearly has a serious impact on the executive branch of the US government, it is also important not to get too sucked into the soap opera of Trump’s court, and lose sight of the broader political consequences.

Let’s not forget that Trump has failed to work successfully with the Republicans in his first six months. For a president who claims he only cares about ‘winning’, the Republicans’ failure to pass any replacement to Obamacare has made him look like a loser. And Trump’s bluster and threats against GOP members aren’t working, as many do not fear any repercussions. Take the fact that certain Republicans like John McCain defied Trump’s wishes in the healthcare vote; or that many senators said they would not replace Jeff Sessions, if Trump dared to sack him; or that Republicans were willing to vote for sanctions against Russia, against Trump’s wishes.

The healthcare discussion shows that the looming Trump-v-Republicans fight will only be a distraction from getting to grips with the US’s real problems. On one hand, you have the Republican ideologues pushing unpopular ideas (only 17 per cent of Americans supported their Obamacare replacement). On the other, you have an idea-free and generally clueless Trump White House, fronted by military personnel and inexperienced sons and daughters, unsure what policies to promote and trying to craft arguments around Trump’s random tweets.

Though much remains unclear, we can at least say that the last week or so has confirmed how overblown the claims that ‘Trump is a fascist’ are. A White House that can’t get its act together to appoint its administration roles (legions remain unfilled), that has no significant accomplishments to speak of, that was rebuffed multiple times in the past week alone, is not an operation that is about to take over the world. Trump and his entourage are outsiders with an unclear political mission and lacking in the competence and experience needed to govern. They’re not Nazis.

It is not the ‘Resistance’ or Democrats pushing Russia conspiracy theories who have damaged Trump’s political standing. Nor, as it happens, are his backstabbing band of palace intriguers the ones to blame for his troubles. No, Trump’s woes are self-generated, and he brings down those around him. As long as he faces no serious political opposition, we can expect more casualties like Spicer, Priebus and Scaramucci in the near future, as the administration unravels.