The political and media class is beholden to a culture of leaking. 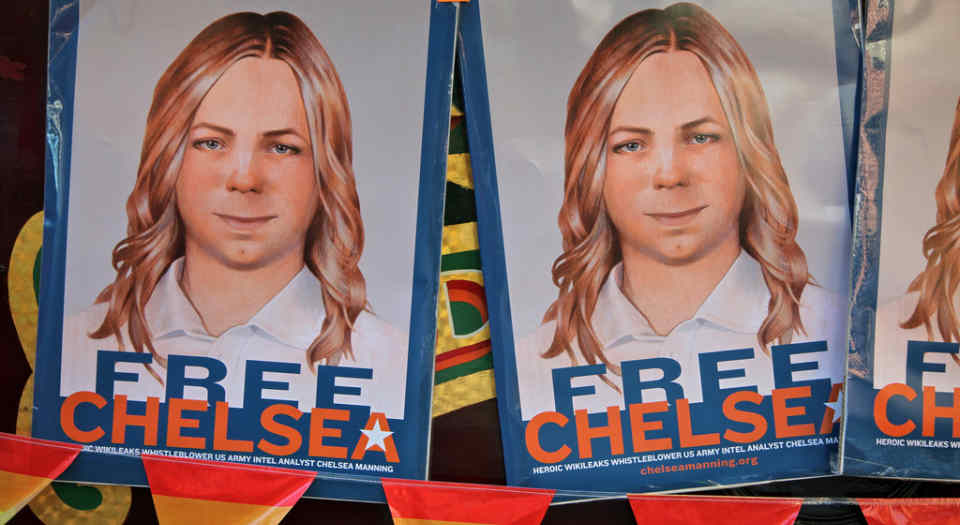 One of Barack Obama’s last acts as US president – to commute the sentence of Wikileaker Chelsea Manning – has proved predictably divisive.

For those self-identifying as liberal-left, Manning, who, in her earlier incarnation as a US Army intelligence analyst called Bradley, passed thousands of low-level military and diplomatic documents over to Julian Assange and the Wikileaks crew, has always been a near saintly figure. A 2012 book on pre-female Manning was even called The Passion of Bradley Manning. Presumably because he sacrificed himself to save us from our hawkish neo-conservative sins. Or something.

So Obama’s decision to bring forward Manning’s release date from 2045 to this May was greeted by liberals and lefties with tears of joy. For them, a virtuous act has now been recognised for what it is. ‘If you’re the kind of person who thinks it is sinful and wicked to know what your government is doing’, ran one left-wing paean to Manning, ‘by all means, take a pass on this plea for clemency. But if you can see the dystopian levels of Washington’s state secrecy have done too much damage to the world, now is the time to take five minutes to raise a voice for Chelsea Manning.’ Another piece praised Manning’s ‘noble motive’, while a Guardian tribute suggested that Manning bravely brought ‘the world’s elites’ to account. Praise be to Manning.

However, for those self-identifying as right-ish, alt or otherwise, Manning’s early release is not an occasion for cheering. She’s not seen as heroic, or even a ‘whistleblower’. She’s seen as a traitor, a criminal, with some even bemoaning the leniency of her original sentence and pointing out that she should have been executed. Donald Trump’s team simply expressed ‘unease’ about Obama’s decision to commute the sentence, noting that she was ‘convicted of espionage and sentenced to spend 35 years in jail’.

When it comes to leaking, however, hypocrisy and double standards abound. Trump and his team, and the rest of the right-wing pundit-sphere, may have disapproved of Manning’s Wikileakiness, but when the leaking’s on the other foot, they lap up every confidential, private detail dumped into the public sphere. So, during the presidential election campaign, Trump’s response to the hacking of the Democratic National Committee’s emails was celebratory, not condemnatory. ‘I love Wikileaks’, he said during one presidential debate. Prior to that he had even called on hackers to release more deleted emails from Clinton’s private server if they had them.

Likewise, those who have long praised Wikileaks, and sanctified Manning in the process, were less than fulsome in their praise of the hacking and leaking of Democratic emails. In fact, they often used the same rhetoric with which the right-leaning had criticised Manning. It was ‘criminal’, they said, an act of ‘espionage’, a sinister attempt by Russian baddies to manipulate the presidential election. ‘It’s not too much to ask the mainstream media in general to think twice about being an eager conduit for stolen goods’, wrote one critic. ‘And since there will be many more next times in the Era of the Big Leak’, he went on, journalists should ‘at least agonise a bit before handing megaphones to the crooks’.

Over and over again, we see the same flip-flopping over leaking. The dodgy dossier on Trump’s Moscow watersports holiday was indulged by those opposed to Trump, and flamed by his supporters. The pussy-grabbing, locker-room audio of Trump, leaked to such prejudice-affirming effect during the election race, was dismissed by Trump as a witch-hunt, and lauded by his opponents as a necessary revelation. And Edward Snowden’s huge National Security Agency data dump was lauded by liberals, and razed by the right. One person’s noble whistleblower is another’s wicked criminal.

This captures something important about the culture of leaking. Leaks, and the leakers themselves, are never valued in and of themselves. Rather, they are valued only to the extent that they serve certain political ends. In other words, leaking has become a form of politics by other means, a way of undermining opponents and opposing institutions, not by actively taking on their public arguments, or critiquing their public positions, but by waiting for that piece of soiled laundry to fall into one’s lap.

This speaks to the passivity of contemporary politics. Antagonists don’t confront each other so much as wait for the other to let him or herself down. And this waiting, this lurking, means that everything is challenged post festum, not in the moment, when it matters. The Iraq War, which was central to Manning’s leak, or even the leaked details of Hillary Clinton’s campaign and finances, become issues to be challenged long after the fact. Opponents are too content to wait for the next embarrassing revelation, the next exposed email, the next barely verifiable rumour. Indeed, they wait for politics to happen, for approximate truths to fall into their laps. And they hope that the ensuing cloud of suspicion, of implied wrongdoing, of suggested personality failings, will be enough to bring the other down, or at least further undermine them.

Yet such is the nature of the culture of leaking that all sides are brought low, all institutions corroded, their authority and integrity reduced to a seeming veneer beneath which wrongdoing, incompetence and double dealing appear to fester. Leaks are not only no substitute for a principled politics, they make it appear impossible.

Picture by: torbakhopper, published under a creative commons licence.