Does Boris want a war with Russia?

Shooting down Russian war planes in Syria is a mad idea. 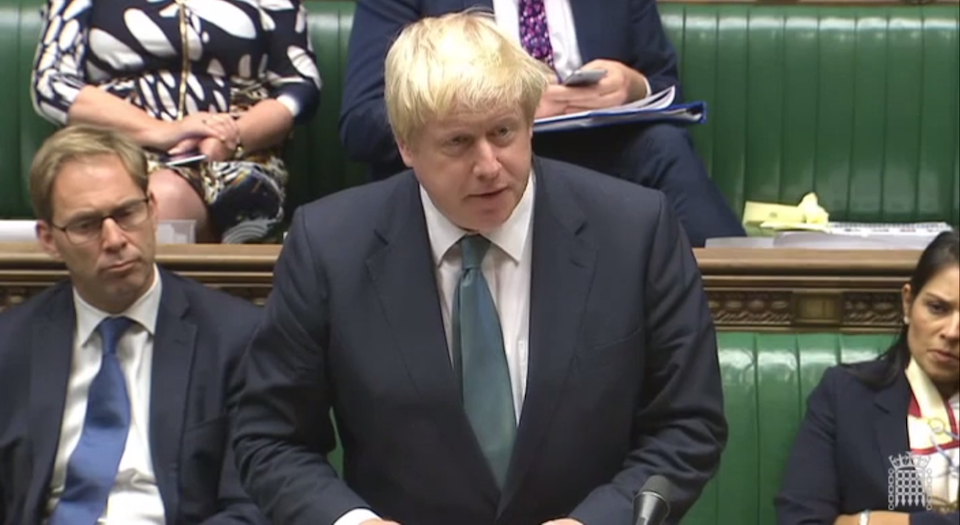 Calls for intervention in the Syrian conflict are growing louder in Britain, with more and more MPs demanding ‘something must be done’. Last week, the London Evening Standard quoted a cabinet minister (who did not wish to be named) who was coming round to the idea of a no-fly zone or a ‘no-bombing zone’. Shortly after, it became clear that the unnamed minister was the foreign secretary, Boris Johnson.

But what does that mean, to enforce a ‘no-bombing zone’ or a ‘no-fly zone’? It means shooting down Russian and Syrian warplanes. Of course, this is fraught with risks, Johnson says. Fraught with risks? The Russian Ministry of Defence has said that any attack on the Syrian military will be treated as an attack on Russian military personnel. Russia has moved anti-missile systems into Syria, as well as on ships in the Mediterranean, following the breakdown of the latest Russian-US ceasefire. Is the prospect of war with nuclear-armed Russia what Johnson means by ‘fraught with risks’?

Last Tuesday, Andrew ‘Plebgate’ Mitchell called an emergency debate in parliament on the situation in Aleppo. Of course, no one wants to get into a shootout with Russia, he said, but if it happens, so be it. The parliamentary debate was full of talk of appeasement and similar nonsense – just a little intervention should do it, and all will be well. Johnson, who has stressed to the House of Commons that Saudi Arabia will not do anything nasty with the British warplanes it has bought, said that Russia risked becoming a pariah state, and has urged people to protest outside the Russian embassy in London.

For the past 25 years, war has been used to weaken nations, a game played by Western political elites for their own sense of moral superiority. It started in Yugoslavia over Bosnia, and then with high-altitude bombing in Kosovo. Western elites chose time and again to intervene for the sake of human rights. Okay, so several states have been utterly destroyed in the process, with hundreds of thousands dead and hundreds of thousands more displaced, but, drunk on a sense of moral righteousness, we did it again, and again. British politicians, and we the public, have become too hardened to bombing faraway places that we know little about. At no point do politicians grasp the fact that killing more people for the sake of protecting human rights is an act of barbarity.

Firstly, intervention does not work. Just look at the destruction of Iraq. Iraq is an example of possibly the most disastrous foreign-policy act post-1945 – from there, all chaos has flowed, including the current crisis in Syria. The British political establishment has spent years embroiled in inquiries about this unmitigated disaster in Iraq. Nonetheless, we went back and did the same thing in Libya. The House of Commons Foreign Affairs Committee (FAC) has just released a very good, and very damning, report of the Libyan intervention, which argues that the UK has done the same thing in Libya that it did in Iraq: intervened without any knowledge of the reality of the situation, or any idea of where to go. Libya has since been thrown into chaos, and has become home to a thriving ISIS offshoot. ‘We came, we saw, he died’, as Hillary Clinton laughed about Gadaffi’s torture and murder at the hands of so-called rebels.

The ink is hardly dry on the FAC report and yet some MPs are debating another catastrophic intervention. It’s as if Libya or Iraq didn’t happen. It’s as if our own parliamentary committees haven’t pointed out what disasters these interventions have been. How many more must there be? Entertaining the idea of further intervention is fundamentally wicked, on a scale much larger than the acts of authoritarians such as Saddam Hussein and Bashar al-Assad.

However, Syria is not Yugoslavia, or Iraq, or Libya. The difference is that, in this situation, Russia has returned to world politics and is protecting Assad. Russia began using military force to protect Assad last year, at a stage in the Syrian conflict in which it was clear that Assad was about to collapse. There is no mystery about why Russia is involved, whatever the Western media say, and it’s got nothing to do with a great love for Assad. When it began its intervention, Russia explicitly said it would not allow another situation like Iraq to happen, and that it was prepared to act ruthlessly and viciously to make sure it prevented such a thing.

So, let’s get this straight. There are some British politicians advocating a policy of shooting down Russian planes in Syria. That they are claiming this can be done without consequences reveals how totally detached from reality they have become. A decade and a half of high-altitude so-called humanitarian bombing, which doesn’t affect us at home in the West at all, and these politicians think that’s all there is to war? Politicians like Mitchell and Johnson seem to think that a bit of a shootout is all that’s needed to show the Russians who’s boss.

What, in the end, would we be fighting for? Terrible as the situation is in East Aleppo, it’s only a part of the city. Life carries on much as normal in the rest of government-controlled Aleppo, apart from the bombing carried out by rebels, which is hardly mentioned in the press. The choice is not Assad or democracy, but Assad or ISIS. Given that there is no public appetite for the UK to intervene in Syria, I wonder what the British public would say if the reality of the situation were put to them. Shall we go to war in Syria to topple Assad and let the jihadis rule? Do we want a World War Three that might end up protecting ISIS?

Thankfully, there were some sensible arguments at last week’s parliamentary debate. Emily Thornberry, the Labour shadow foreign secretary, argued that the last thing Syria needs is more belligerents in a hideously multilevel war. She also made the point that Britain itself was supporting a deadly war in Yemen. It’s of note that Britain is not just selling arms to Saudi Arabia – British military personnel are actually directing airstrikes, too. We should protest outside our own Foreign Office, against Johnson, and force him to explain why British military personnel are directing Saudi airstrikes on hospitals, schools and funerals in Yemen.

One positive sign was that the debating chamber was three-quarters empty, suggesting many MPs are not eager to threaten Russia with war. Nonetheless, the debate itself was a terrifying display of the fact that there seems to be little understanding of the reality and consequences of what is being suggested. Shooting down Russian planes in Syria? It’s a terrible, dangerous idea.