The end of the Rainbow Nation 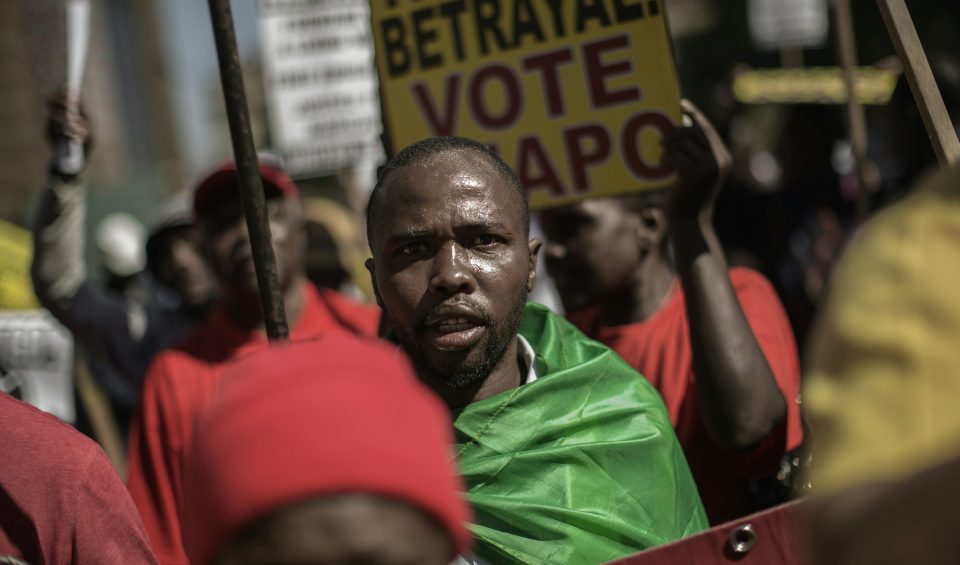 In one respect, the result of the South African municipal elections, which were held on 3 August, is a watershed moment. It revealed the degree to which the ruling African National Congress’s electoral base in the cities and rural areas has been eroded after a generation of being in power.

Many argue that what is bad news for the ANC is good news for South Africa. They suggest that a real democracy is now taking root, a democracy in which opposition to the dominant post-liberation, post-Apartheid political force – namely, the ANC – can challenge and defeat it at the polls.

There is truth in this. The ANC did not lose the election. In fact, it received close to 54 per cent of the vote. But, crucially, it lost some key metropolitan areas, which will now be ruled by ‘anyone but the ANC’ coalitions (see Sharmini Brookes’ spiked article on the results).

The ANC’s level of support dropped below 60 per cent for the first time, a drop ANC secretary general Gwede Mantashe described as a ‘psychological and political turning point’. Opposition politicians and the Western media are now openly pondering a South Africa no longer under the sole power of the ANC.

This speculation, however, skirts over another key aspect of these elections: namely that, despite the deep disillusionment, frustration and anger among the majority of South Africans about the political and economic state of South Africa, manifest in numerous township riots in recent months, the ANC still managed to muster 54 per cent of the vote. Most Western political parties could only dream of the level of support still commanded by the ANC.

The ANC’s continued ability to win the support of the majority of South Africans is remarkable, especially given the reality of South Africa after 20 years of ANC rule. This is a nation in which 8.9million working-age people (36.3 per cent) are unemployed; 63 per cent live in poverty; and 13million people go to bed every night without food. This is an economy that shrank by 1.2 per cent in the first quarter of this year, and is projected to record zero growth – it is teetering on the brink of junk status in international financial markets. This is a government that carried out the Marikana Massacre in 2012, murdering black miners striking for a living wage, and then oversaw the prosecution of those same miners and their comrades for crimes allegedly committed during the strikes. This is a government that has diminished its moral capital by tolerating and covering up levels of presidential and ministerial corruption that would have made Imelda Marcos blush. This is a governing cabal that is financing a patronage network, while reducing South Africa to one of Africa’s worst basket cases.

Yet, despite all this – the corruption, the brutality and the failure – the ANC can still command 54 per cent of the popular vote. It is a remarkable achievement and one that speaks to the ANC’s real success: its depoliticisation and demoralisation of a vibrant mass political movement, one that once had the potential to bring about radical social and economic change in South Africa. The ANC’s systematic disorientation of its own supporters is the jewel in the crown of South African capitalism.

The ANC’s initial response to its electoral defeat is a case in point. After blaming the bad weather for the low turnout among ANC supporters (which provoked uncontrollable laughter), ANC secretary general Mantashe described the coalition governments set up in the metropolitan areas where the ANC lost control as being ‘devoid of any revolutionary commitment to defeat the real enemy of the people, monopoly capital’. This, however, did not provoke the laughter it should have. If there is any political party protecting ‘monopoly capital’ in South Africa, it is the ANC. It is the party, after all, that made the shoddy deal with the Apartheid regime, leaving the socioeconomic structure of South Africa largely intact in exchange for access to political power and a place at the economic table.

Over the past 20 years, in presenting the furthering of its own narrow interests as a victory for the masses, the ANC has confused the post-Apartheid movement. The role of the South African Communist Party (SACP) has been critical here. It gave the conservative, pro-capitalist and nationalist ANC leadership the radical credentials it needed to appeal to an overwhelmingly proletarianised and radicalised black mass movement. This mass movement became a stage army for the ANC’s opportunist leadership under Nelson Mandela, which the ANC successfully used to negotiate its access to political power. The SACP’s obscurantist Stalinist rhetoric about objective conditions and the need for a national democratic revolution (as opposed to an anti-capitalist one) inculcated the belief that there was no alternative strategy, that limited political power (which did not threaten or alter the existing socioeconomic structure of South Africa) was the only realistic choice. This established the belief that there was no alternative to market economics and that limited democratic change was the order of the day (see ‘South Africa: still an Apartheid state’ for a fuller explanation of this phenomenon).

So, while it may be true that the fall in the ANC’s support reveals a degree of anger among the electorate, in the historic centres of resistance to Apartheid, demoralisation and disillusionment predominate. For example, in Soweto, an ANC stronghold, voter turnout was as low as 46 per cent. Young South Africans of voting age, who never experienced Apartheid, don’t vote. Those who do are immune to the ANC’s harking back to its historic role. Like all sections of South African society, young black South Africans have been schooled in the politics of TINA (There Is No Alternative). Those who bother to vote either do so to show two fingers to the ANC or they vote with little conviction for weak opposition parties like the Democratic Alliance or Julius Malema’s Economic Freedom Fighters, which, apart from their persistent attacks on ANC corruption, offer no vision or programme that is different from ANC economics. Instead, political battles are fought over where to spend a limited pot of state cash, be it cycle lanes or housing. The radical EFF has adopted the ‘extremist’ position of wanting workers to have shares in the companies they work for. This is what constitutes the political alternative to the ANC.

Given the poverty of the opposition, therefore, perhaps it is not a surprise that the ANC can still pick up 54 per cent of the vote. The legacy of Apartheid still ensures that the vast majority of black South Africans refuse to vote for parties that have any connection with past oppression. But the fact that this support has waned shows that young South Africans are starting at least to question ANC dominance and have become immune to the ANC’s appeal to its role in the national liberation struggle. The problem, however, is the absence of any political critique that can make sense of contemporary society and expose the ANC as the problem, rather than the solution.

In the absence of this, one thing can be predicted with depressing confidence: the factional struggle within the ANC will intensify. The election result has shaken the ANC’s leaders. They have woken up to the fact that their hold on state power is slipping. This has intensified the scramble by President Jacob Zuma and his supporters to gain greater control over state resources in order to fund a patronage strategy they think will keep them in power, even as their traditional electoral support ebbs. This is what lies behind the remarkable battle between Zuma and his finance minister, Pravin Gordhan.

This struggle centres on who commands the treasury and due process, the same struggle that led to the disastrous removal of Nhlanhla Nene from the Finance Ministry in December last year – a move that sent the economy into a tailspin from which Zuma had to beat a hasty retreat. Firing Gordhan on the pretext that he is facing criminal charges (which are completely trumped up), and therefore cannot serve in such a key cabinet position, is a way to seize control of the treasury and undo the stringent controls it has placed on spending and tender processes (perhaps the last area in which unfettered ministerial thievery and corruption remains in check). The post-election cabinet decision to allow Zuma to oversee all parastatal strategy shows that Zuma and his cohorts are gearing up for a smash-and-grab raid on state spending. This is like giving an alcoholic the keys to the liquor cabinet.

The consequences of this struggle over state monies for the South African economy will be dire. South Africa will be downgraded to junk status, which, in turn, will drive it into full-blown recession.

Zuma, the ANC leadership and their patronage networks might be laughing and drinking all the way to the bank, but the people on whose backs the ANC rode to the trough, in which its snout is now thoroughly pushed, will have little to laugh about. They will have no alternative but to find alternatives. Seeing the ANC for what it is – the party of South African capitalism and the ‘real enemy of the people’ – could be the first step towards forging a real opposition.