The West stoked this war, so why trust it now to deliver peace? 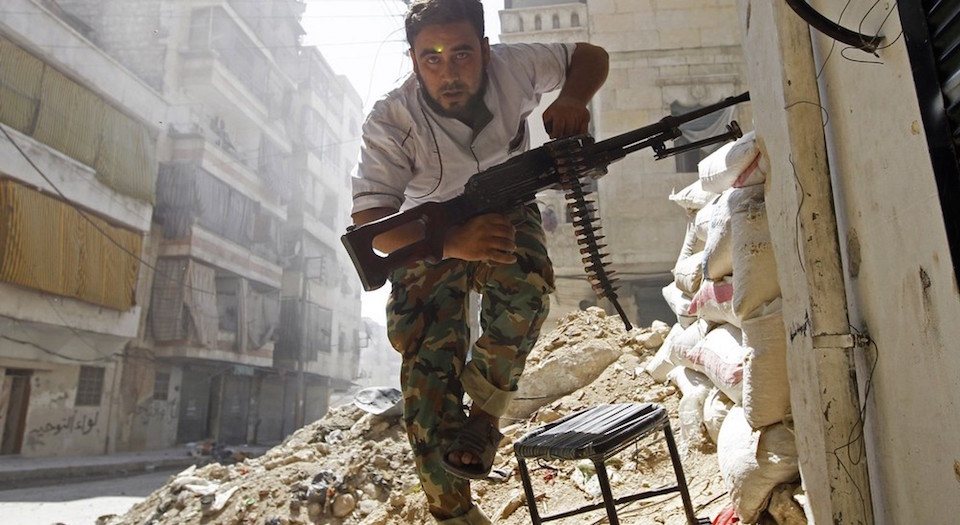 ‘It’s very strange, and I cannot understand it’, said Ahmed Othman, the commander of the Furqa al-Sultan Murad battalion currently fighting Assad’s forces in Syria. You can understand Othman’s confusion. Why, he was wondering, was his US-backed group being attacked by another US-backed group, in this case the Kurdish People’s Protection Units (YPG)? Furqa al-Sultan Murad is not alone. The YPG, which receives weapons and support from the US as part of its war with ISIS, has also been fighting several other groups, including the Northern Division, Jaysh al-Mujahideen and a coalition called Jabhat al-Shamiya, all of whom are backed by the CIA against Assad. It seems that such is America’s multi-faceted immersion in the conflict in Syria and Iraq that it is now fighting itself.

This story of America’s self-cannibalism, emerging at the same time as the latest partial and ‘provisional’ ‘cessation of hostilities’ in Syria is announced, captures something of the grisly irony of this US-brokered, Russia-sanctioned truce. That is, those currently posing as the solution to conflict, those like US secretary of state John Kerry, faces full of anguish, and mouths urgently spouting ‘we must do something’ platitudes before the mounting death toll, are the very same forces responsible for the unravelling of Syria and Iraq in the first place. They are desperately trying not to reap what they sowed. And make no mistake, they did sow the seeds of the current hydra-headed conflict. They backed militias against Syrian president Bashar al-Assad in the aftermath of the now abortive-looking Arab Spring, they anointed Assad’s successors in their various guises and they even did a bit of high-altitude bombs-away diplomacy, and then, as the wrong rebels, with the black-clad Islamists of ISIS to the fore, exploited the Western-urged crumbling of the old regimes, they backed new groups, new rebels and new constellations in the overlapping fight against the new enemy, and its apocalyptic visions of the Caliphate.

Given this quagmire, in which Assad is both the West’s enemy and enemy of the West’s enemy, is it any wonder that the apparent truce, mooted weeks ago, seems riven with absurdity? It is meant to apply to those whom Russia and the US are supporting, from Assad to the YPG. But it doesn’t apply to the enemies of those whom Russia and the US are supporting. And given who is an enemy to whom depends on whose side you’re on, it means that the truce has a rather limited and arbitrary application. It’s not a ceasefire, said Assad, and he’s not wrong.

Sadly, many of the Western media seem to have very short memories when it comes to the Syrian conflict. The blame is now heaped on Assad for not giving up, and, more prominently, Russia, for driving regional instability, using the conflict to further its supposedly nefarious aims, including rattling NATO member Turkey’s cage and shoring up its ally Assad. And while the Russians and Assad are accused of bombing hospitals, the West, with the US leading the charge, appears as the balm on the wound, the bringer of stability, the stand-up, straight-ahead good guys. ‘[The truce] might fail. But until it does, the US should do everything in our power to help it succeed’, declaimed the Washington Post.

Really? Haven’t the US and the West done enough already? Just look at the record of Western intervention since the Arab Spring five years ago: the collapsed and unravelled states of Iraq, Libya and Yemen; the revived military dictatorship of Egypt; and, of course, the bombed-out Syria.

Yes, there is now the attempt retrospectively to cast Russia-backed Assad and ISIS as the ruination of Syria, the former stubbornly entrenched and the latter ruthlessly risen. But it was today’s truce-brokers, the US and their Western cheerleaders, who were yesterday’s buffoonish warmongers in Syria – it was they who forced Assad to entrench himself; it was they who paved the way for ISIS’s ruthless rise.

Think back to 2011, to those heady days when it seemed as if a popular uprising in Syria was going to, if not topple Assad, then certainly force him into political concessions. Something happened that turned the Syrian uprising into a brutal, region-defining war, something that prompted a swathe of Syrian army officers to betray Assad and rebrand themselves as the anti-government Free Syrian Army (FSA). And it wasn’t just the chance for power granted by the popular insurgency. No, they were also emboldened by Western states’ decision to abandon Assad, their one-time ally, to declare, as both US secretary of state Hillary Clinton and UK foreign secretary William Hague did, that Assad had lost legitimacy, and that they had ‘absolutely nothing invested in him remaining in power’. We’re on your side, the West was telling the FSA. The West then proceeded to fund and arm the anti-Assad forces assembled under the FSA banner, give them shelter in Turkey, and, in cahoots with the FSA, anoint the next Syrian government, the Syrian National Council, in exile. And, in doing so, with Assad backed into a corner, an uprising became something else, something far more intractable: a civil war.

There was another consequence to the West’s backing of anti-Assad rebels (many of whom are now fighting the US-backed Kurds), and its denouncing and delegitimising of the Syrian government: the rise of ISIS. Because it was in those areas the Western-backed rebel forces initially took in northern and eastern Syria that ISIS seized control. Not because of their military and political genius, but because the withdrawal of government control left a civic and political vacuum that the long-forgotten Syrian Opposition Coalition, and the rebel groups who looked to the West rather than to local peoples for support, proved utterly incapable of filling. It was into this organisational and administrative collapse that ISIS, with practical food-and-water-providing solutions at hand, drove their invariably US-supplied SUVs. That’s why it’s no coincidence that the de facto capital of the Islamic State is none other than the first city to fall to the anti-Assad rebels, the one-time ‘Bride of the Revolution’ no less: Raqqa.

And now, with ISIS and other equally backward groups still enjoying the fruits of the West’s opposition to Assad, and US-backed groups from one stage of the conflict fighting US-backed groups from another, we are meant to believe that Syria’s best chance at something approaching stability will be delivered by those who have done so much to remove it. Not a chance. At every stage, the US and its allies have inflamed the Syrian conflict. They will not extinguish it.

Picture by: A. Anis.