We must stop asking Charlie to defend liberty for us all. 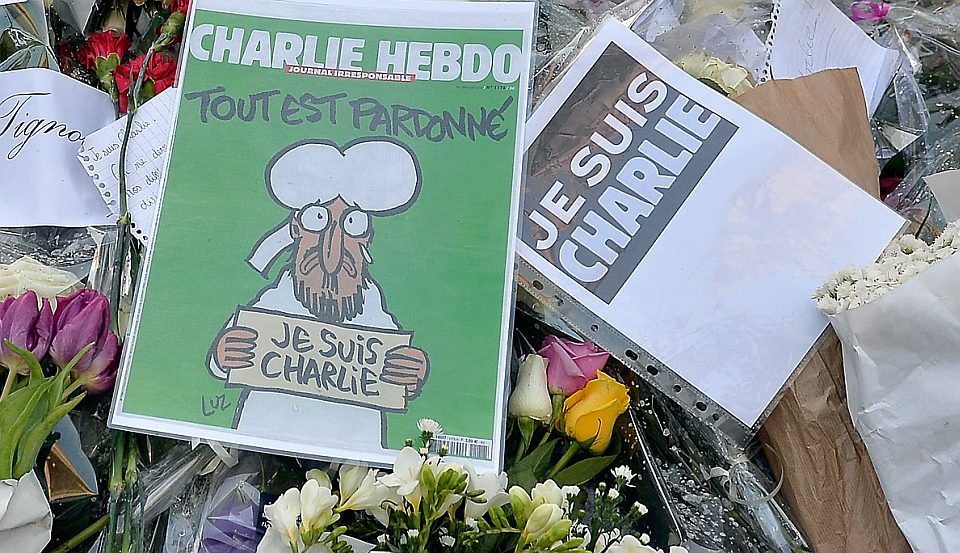 Have things gone sour for Charlie Hebdo, asks the BBC this week? Some might think things went sour for the scurrilous French satirists when eight of their staff were gunned down in January for committing Cartooncrimes against Muhammad. But what the Beeb means is that, now, the post-massacre favour for Charlie Hebdo, which expressed itself in everything from the global cry of ‘Je Suis Charlie’ to so many financial donations that Charlie Hebdo has become one of the richest newspapers in France, seems to be waning. The ‘global outpouring of sympathy’ is giving way to disappointment with Charlie, says the BBC, especially over its refusal to continue mocking Muhammad.

The souring of the solidarity with Charlie Hebdo nine months after the murders speaks to one of the rarely discussed problems with the post-massacre moment: the way concerned liberals in Europe and elsewhere effectively called on Charlie to carry, singlehandedly, the torch of freedom of speech. The idea seemed to be that so long as this edgy mag was dissing Muhammad, then we would know that freedom staggered on, that the great Enlightenment value of people being allowed to express themselves without suffering persecution or violence was still alive. So when it said it would no longer draw Muhammad, this was viewed not merely as an editorial decision, but as a betrayal of flagging freedom. This is unacceptable. Charlie Hebdo deserves, like everyone else, freedom of speech, but it also needs a new freedom: freedom from liberals’ expectations, freedom from playing the brave, singular warrior for the right to offend on behalf of liberals bereft of ideas for how to challenge the broader culture of intolerance.

The BBC says there’s growing disappointment with Charlie Hebdo for failing to ‘stay true to its values’. This week, having spent nine months working under armed guard at the offices of Libération, the magazine’s staff have moved to a new permanent base. And as they do, some are worried about a ‘change of editorial direction’, maybe even a ‘kind of withdrawal’. Both Luz, one of Charlie’s most famous cartoonists, and Riss, the new editorial director, have said they will no longer draw Muhammad. French journalists worry that ‘security fears’ have dampened Charlie’s spirit. It seems even Charlie itself is now ‘Je Ne Suis Pas Charlie’, says an American critic of Islamism. ‘Terrorists win’, said a headline in response to Charlie’s ditching of the Muhammad-mocking. Charlie has taught us that ‘terrorism does work’, said one observer, describing Charlie’s change of direction as a ‘resounding victory for the enemies of free speech’.

There are two things to say about this tut-tutting over Charlie Hebdo’s seeming shift. The first is that it’s pretty inhumane. Charlie’s workers suffered enormously, and still do. As the editor of Libération, Laurent Joffrin, told the BBC, ‘Every Islamist in the world dreams of killing one of those guys’. Life is very difficult for them. They live under constant protection. They’re even advised not to sit near the windows in their own homes. ‘They live in the dark’, says Joffrin. How easy it is for the safe, comfortable edgy hacks of the West to implore Charlie to keep on doing the thing its staff were murdered for doing. ‘Put your necks on the line for us’, is the self-serving cry of the disappointed-with-Charlie brigade. But if they think taking the piss out of Muhammad is so important, why don’t they do it? Why don’t they plaster pictures of Muhammad with a dick on his head on the front of their publications?

More to the point, survivors of the Charlie massacre say they’re just bored with mocking Muhammad. Riss, who survived the shootings by playing dead, said the mag had ‘done its job’: ‘We have drawn Muhammad to defend the principle that one can draw whatever they want.’ So Charlie caricatured Muhammad in order to make a point about freedom of speech, about the right to do it, and it doesn’t think it has to keep on doing it; that seems entirely legitimate to me. Charlie should absolutely have the right to ridicule Muhammad, but it doesn’t have a responsibility to do it.

The second thing to say about the ‘souring’ of the love for Charlie Hebdo is that it reveals what a parlous state the fight for free speech is in. Over the past nine months, we’ve seen the solidifying of two responses to the massacre in January. The first — and the worst — has been the reluctance of those who call themselves liberal to stand by Charlie Hebdo, to do what spiked called on everyone to do just a few hours after the massacre took place: ‘Fight for the right to be offensive, in memory of the journalists at Charlie Hebdo.’ Instead, using slippery blather about Charlie’s satire ‘punching down’ rather than up and about a climate of ‘Islamophobia’, too many Western liberals effectively said Charlie brought the massacre on itself, and in future we should all tone our critiques of minority belief systems if… well, if we don’t want to die. They actually did the terrorists’ dirty work for them, echoing the killers’ message of ‘You can’t say that!’ in their newspaper columns.

But the second response to Charlie Hebdo – the sanctification of the magazine as brave, brilliant mocker of Muhammad – has been bad, too. In many ways, the lingering cry of ‘Je Suis Charlie’ has become a displacement activity, a means of avoiding addressing today’s myriad assaults on freedom of speech in favour of goading one magazine to continue sticking it to The Muslim. At a time when numerous laws control what ‘hateful’ comments we can make, when a new informal regime of censorship rules on campus, when a culture of conformism stifles critical thought on everything from gay marriage to climate change, it is surreal that so many have obsessed over the threat posed to liberty by Islamists – whom they describe as ‘the enemies of free speech’ – and have goaded Charlie to keep saying ‘Fuck Muhammad’ as a massive wind-up to these Islamists. Incapable of grappling with, far less opposing, the vast new regimen of ideas-silencing, some liberals have internationalised the crisis of free speech instead, presenting it as a case of a few plucky Westerners against foreign-influenced people with beards and guns.

But it’s not like that. Free speech in Europe is under assault from within, by the very people you might expect to defend it: academics and liberals now more concerned with controlling the expression of hate than with guaranteeing freedom of thought. Charlie Hebdo cannot, and shouldn’t be expected to, hold back this tide of illiberalism. Some hate Charlie for mocking Muhammad, others hate it for no longer mocking Muhammad. How about we let it decide its editorial destiny for itself, while the rest of us, alongside Charlie hopefully, put up a proper, continent-wide, adult fight against all laws and mores controlling what we may say. ‘We are expected to exercise a freedom of expression that no one dares to’, said Riss in response to those who criticised Charlie for ditching the Muhammad pics. Exactly. Stop expecting one magazine literally to risk its staff’s lives for liberty; instead, let’s all take more risks in the battle against the new intolerance.