The left: from solidarity to pity

Lefties no longer struggle with the people – they feel sorry for them. 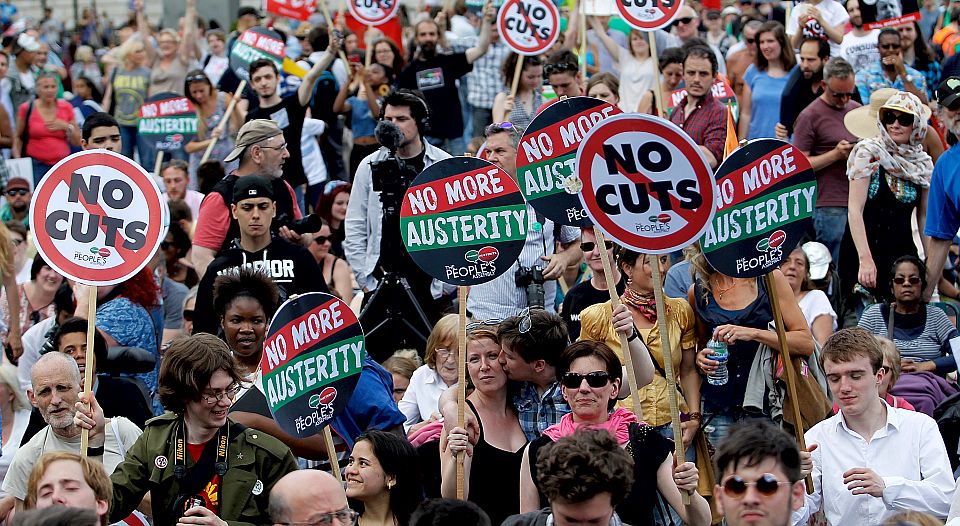 Following the unexpected outcome of the UK General Election, every left-winger in the UK seems to be midway through the five stages of grief.

First came denial and isolation. The electorate were decried as selfish, self-centred and simply wrong. A vote for the Tories was deemed villainous and evil, a vote that would result in what Russell Brand described as ‘no shortage of meanness’. Ed Miliband’s resignation speech went straight for denial: ‘While we may have lost the election, the argument of our campaign will not go away.’ This view of Labour as the true winner, the underdog that will return, was echoed across social networks, with one famous blogger even apologising to her followers on behalf of the electorate for their devastating mistake.

The second stage of grief is anger, and boy do left-wing activists enjoy being pissed off. Their favourite slogan, ‘Don’t mourn, organise’, was used to red-wash their initial embarrassingly emotional response to the election result. So, duly organised, protesters marched to Whitehall to squirt ketchup at 10 Downing Street to display their disgust at the Tory government and the people who voted it in. Charlotte Church, the new anti-austerity celebrity pin-up, told Wales Online that ‘the UK masochistically condemned itself to five years of Tory rule’. It seems that these angry condiment-wielders don’t just think the Tories are scum — they also think the public are pain-loving idiots.

A further anti-austerity protest has been planned by the People’s Assembly, a group originally set up by the likes of Labourite Tony Benn and trade unionist Bob Crow, which continues with the support of Green MP Caroline Lucas, filmmaker Ken Loach, writer Tariq Ali, and members of the commentariat who just love to be seen flirting with people power. There is also a national day of action, including a ‘make some noise’ protest, in North Staffordshire, during which activists will bang their spoons on their bowls, Oliver Twist-style, in protest against the poverty and starvation a Tory government will supposedly create. Not only is this kind of base, hand-to-mouth vision a total exaggeration of the actual economic situation in the UK — it also suggests that real politics and big ideas cannot be grasped by the masses. Apparently, we’ll only understand naff evocations of the Victorian poor.

The response of the leftish and would-be radical to the election result captures well the death of solidarity and the rise, in its place, of pity politics. The language used by radicals during and after the election was unashamedly emotional. They launched campaigns that aimed to tug on your heartstrings rather than change your mind. They circulated photos on Twitter of the types of people who would die under Tory-led austerity. And Brand, in his post-election video, told his viewers that they must all be nice to those less fortunate than ‘us’. This patronising of ‘the people’, or ‘the poor’ as they’re often referred to in anti-austerity petitions, rests on the division in British society between the new metropolitan elite and the rest of the UK. Many of those pitying the poor, and viewing themselves as on the left, belong to this elite. They share its attitudes and propagate its views, from its championing of everything green and grassroots to its celebration of all things queer. And they therefore feel entirely separate from those in whose name they claim to act – the ‘poor’, the ‘vulnerable’, the ‘victims’.

Lefties today seem to lack any sense of solidarity, the sense of having a shared political outlook, of wanting the same things from the political future. In solidarity’s place, the left now practices a hollow and dangerous politics of pity. But there is no forward-thinking to be found in emotion, no political argument in pity. Hence, when controversialist Katie Hopkins wrote an attack on the immigrants trying to cross the Mediterranean, she was criticised by the pity-happy left for being hurtful and insulting. There was no political discussion about what the people in the sea needed, no argument for free and open borders. There was just ostentatious sympathy.

The current move towards a politics of pity is a problem for anyone who believes that political solidarity, achieved by free and open discussion, is the only way to change society. We need to kick emotionalism out of politics. It is the tear-filled chasm between ‘the people’ and those who claim to speak for ‘the people’.