Edge of Eternity: before freedom was feared

Ken Follett's final entry in his twentieth-century trilogy is a rollicking reminder of yesterday’s optimism. 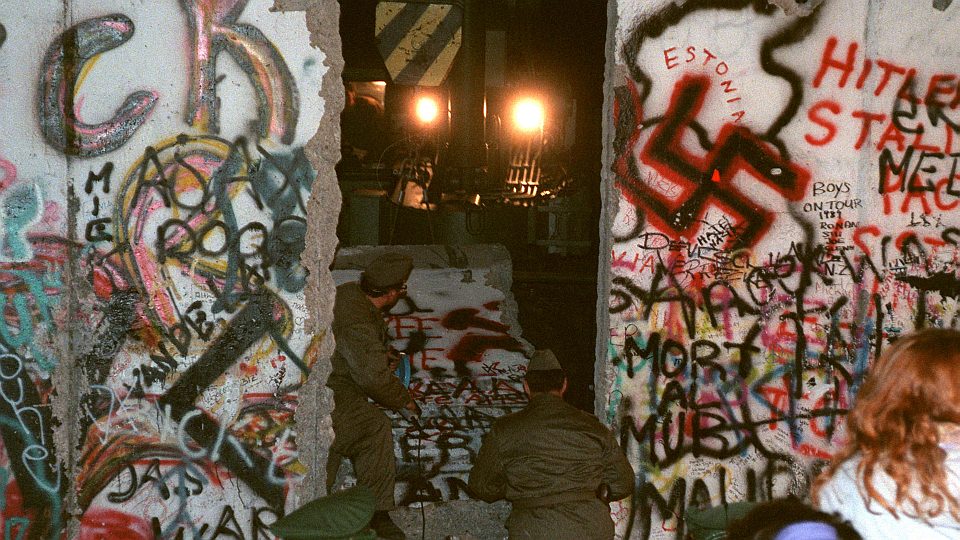 For anyone who has devoured the first two novels in Ken Follett’s ‘Century Trilogy’, the publication of Edge of Eternity last month comes as an eagerly awaited treat. Follett’s journey through this tumultuous period took us through the First and Second World Wars (Fall of Giants, Winter of the World), and now brings us to the Sixties – the civil-rights movement, the Cuban Missile Crisis, rock’n’roll, the Berlin Wall, and several other iconic moments.

For Follett, the twentieth century ends with the fall of the Berlin Wall. It’s handy on the marketing front: 9 November 2014 marks the twenty-fifth anniversary of the fall of the Wall, a reminder of just how momentous an occasion this was, and how long ago it seems now. And however you read Follett’s historical rendering of the period 1961-1989, it’s a great excuse to consider how much happened over that chunk of time.

There are two ways to read Follett. The first is to don your critical literary, historical and political caps and to pick fights with him at every turn. The characters are impossible ciphers, the history is selective, and the politics are comfortably, often cloyingly, leftist.

The second is to suspend disbelief, and just enjoy the stories. If it’s a history of the twentieth century you want, read Frank Furedi’s First World War: No End in Sight; if you’re after a beautiful novel capturing the era, read Philip Roth, Tom Wolfe or William Boyd. But for a fast-paced romp through key moments in postwar politics, Follett does exactly what it says on the tin.

The novels follow the paths of five families from England, Wales, America, Germany and Russia, who are uncannily linked together and all manage to be in the most important places at the most important times. In Edge of Eternity, the American protagonists work with (and/or sleep with) Bobby Kennedy, John F Kennedy and Martin Luther King. In Russia, the twin grandchildren of a soldier who stormed the Winter Palace in the October Revolution grow up to become, respectively, an aide to the Kremlin and a dissident journalist.

In England, the young housemaid in the first novel who became pregnant by the Lord of the Manor enters the House of Lords following an illustrious career in politics, while her grandson becomes the lead singer in an internationally famous rock band. The Lord of the Manor’s sister, meanwhile, had secretly married a German diplomat just before the First World War and lived out the Second World War fighting fascism in Germany; her descendants now scale the Berlin Wall on the run from the Stasi, and her grandson teams up with his distant British relative to become the songwriter and guitarist for said internationally famous rock band. ‘It sounds mad!’, said a friend, when I tried to explain the plot. Yep.

But looking back on that era, even some of the stuff that really happened seems peculiarly difficult to compute. It’s easy to forget, for example, that the backdrop to the glitzy Sixties was disenchantment and fear in the West. The atomic bomb was dropped on Hiroshima in 1945, and the sentiment that the world was about to end cast a grim shadow over the Fifties. When the US and Russia squared up to each other during the Cuban Missile Crisis of 1962, global destruction seemed imminent.

Yet people did not respond to the world ending by hunkering down and calling for more laws and rules. They demanded more rights, and more freedom, in their everyday lives. Today, it has become fashionable to paint the Sixties as some kind of frivolous, self-indulgent party, where people had more money and fewer cares than ever before. But for many at the time, the battle against established conventions and restrictions was the product of a deeper commitment to change. A postwar peace in which people cowered under the spectre of World War Three was not worth settling for.

The importance of freedom loomed particularly large as the reality of life in the Soviet Union was revealed. The Berlin Wall went up overnight in 1961 to stop people fleeing the repressive German Democratic Republic; Aleksandr Solzhenitsyn’s One Day In The Life of Ivan Denisovitch was published in 1962, revealing the harsh treatment of Russians seen to deviate from the party line. The Soviet Union became indefensible.

This was both a gift to the elites of the West, and a burden. As John F Kennedy said, in his famous ‘Ich bin ein Berliner’ speech of 1963, ‘Freedom has many difficulties and democracy is not perfect. But we never had to put up a wall to keep our people in.’

The main ideological advantage that the West could claim over the Communist alternative was the promise of freedom. But this meant that democratically elected elites and their institutions were under pressure to deliver on their promise – which they often did not want to do. When people were prepared to risk their lives to get to West Berlin, freedom was easy to promote, and difficult to restrict. Once the Wall came down and the Iron Curtain crumbled, the ‘difficulties’ of freedom and the ‘imperfections’ of democracy came to preoccupy political leaders more and more.

Edge of Eternity stops just at the point where it seems that people’s desire for freedom has won. Follett acknowledges the extent to which the Soviet Union crumbles from within: this was less a victory for the West than a final, exhausted collapse of the East. ‘I’ve spent my life working for the American government,’ says John F Kennedy’s fictional former mistress, Maria Summers. ‘All that time, our end has been to defeat Communism. But, in the end, Communism defeated itself.’

But the true story of the Berlin Wall’s sudden collapse is as just as exciting as Follett’s novel makes it sound; a moment where official confusion mixed with public protest made history happen very fast. What had been intended as a relaxation of travel restrictions from East to West Germany, brought about by the opening of Hungary’s borders the previous year, became a furious public demand for the checkpoint gates to be opened. Follett tells it like this:

Everyone knew the situation was dangerously unstable. Lili feared the guards would start just firing into the crowd. They did not have enough ammunition to protect themselves from ten thousand angry people. But what else could they do?
In the next instant, Lili found out.
Suddenly an officer appeared and shouted: ‘Alles auf!’
All the gates swung open at once.
A roar went up from the waiting crowd, and they surged forward. Lili struggled to stay near her family as everyone flooded through the pedestrian and vehicle gateways. Running, stumbling, shouting and screaming for joy, they passed through the compound. The gates on the far side were open. They surged through, and East met West.

The final chapter of Edge of Eternity depicts the symbolic reunification of the German family whose lives, over the course of the novel, had been spent on opposite sides of the Berlin Wall. If Follett had stopped there, he might have captured the spirit of optimism, the desire for the fragmented people of Europe to be ‘Together again, at last’. But then he goes and spoils it all, by fast-forwarding to November 2008, in an epilogue paying homage to the election of Barack Obama as the America’s first black president. As though, between 1989 and 2008, nothing else of significance has happened in the world.

In the early twenty-first century, there are certainly lots of wars, and plenty of fear. These global conflicts are deeply destabilising, and people’s fear extends beyond bombs on aeroplanes to matters of everyday life – what they eat, how they bring up their kids, the effects of the sun on their skin. But looking back 50 years, we are reminded that it didn’t need to be like that.

Freedom and democracy could have won out; the Western world could have embraced the new chapter of history that had suddenly exploded on to the page. Instead, today’s elites blame the liberty of the past for the problems of today, and the radicals call for restraint. And nobody even needed to build a wall.

Jennie Bristow is an associate of the Centre for Parenting Culture Studies, where she is studying the sociology of generations. She is author of Standing Up To Supernanny and co-author of Parenting Culture Studies and Licensed to Hug. (Buy these books from Amazon (UK) here, here and here.) Bristow also runs the editing service Punctuate! She will be speaking at the debates Computer says no? Vetting, barring and child protection revisited and Romantic love: just an illusion? at the Battle of Ideas festival, held at the Barbican in London on 18-19 October. Get tickets here.

Edge of Eternity , by Ken Follett, is published by MacMillan. (Buy this book from Amazon(UK).