The meddling of the US and the EU has produced nothing but chaos. 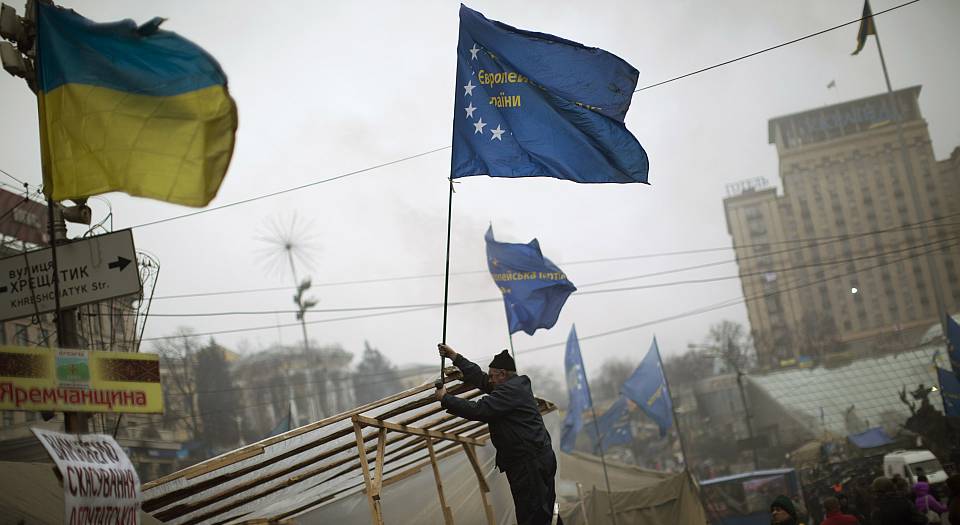 A corrupt leader, relying on police and military for support, was in power. So the protesters who took to the streets, and were beaten back by riot police, must represent the people and democracy, right? No, not necessarily, and Ukraine is an example of how that simplistic logic doesn’t always hold.

The overthrow of the Ukrainian government led by President Viktor Yanukovich is not something to celebrate. There should be no sympathy for the corrupt and illiberal Yanukovich, but that doesn’t make his opponents democrats. Bad as he was (it’s probably fair to speak of him in the past tense now), Yanukovich was in power thanks to a democratic election. The protesters in Kiev’s Maidan did not represent a mobilisation of the masses of Ukraine – it’s fairly clear that they were supported mainly in the western region of the country, with many in the east and south opposed if not hostile to them (and it’s not evident at all whether a majority of the country as a whole supported the protesters). Yanukovich’s government did adopt illiberal laws, limiting freedom of speech and assembly and placing fewer constraints on executive power, but that did not make him a ‘dictator’, as some overblown descriptions have it. This was not a popular uprising, nor was the overthrow of the government required because normal democratic channels were closed.

We shouldn’t be naive about street protests, whether in Ukraine, the Middle East or in the West. Just because a group is protesting a corrupt government, that doesn’t mean that group has have progressive or liberty-favouring ideas. In Kiev, the protesters included neo-Nazis, nationalists and cranks (as well as genuine liberals).

Furthermore, people do have a right to protest, to assemble and speak out, but they do not have a right to occupy a public space on a permanent, ongoing basis. Groups that set up such camps – even Occupy types in the West – are effectively throwing down a challenge to the government about who runs society. Such a challenge might be necessary at times, especially if the occupiers have the mass of people behind them and there is no alternative, but those who do so shouldn’t be shocked when they are eventually confronted by the police or military. As it happens, street occupiers sometimes know full well what they are in for: at times they are an unrepresentative minority that seeks to prod the government into responding in a heavy-handed, repressive manner in order to gain sympathy and support that they are not able to achieve through public debate or the ballot box.

In Ukraine, the dismissal of a democratically elected leader and the overriding of the constitution through street protests establishes a questionable precedent. This may come into play in the future, given the lack of unity among the different factions that comprise the protesters. As George Friedman of Stratfor perceptively notes: ‘The precedent has been set… that governments and regimes can be changed by a legalistic sleight of hand. At some point, a large crowd will gather and occupy buildings. If the government opens fire, it is run by monsters… But if the government allows itself to be paralysed by demonstrators, then how can it carry out its constitutional responsibilities?’

For all of the cheerleading in Europe and the US about the Yanukovich regime’s demise, there is very little focus on the opposition. It seems that, for many in the West, knowledge of the opposition consists of remembering pictures of the woman with the braided blonde hair who led Ukraine’s Orange Revolution in 2004. Her name is Yulia Tymoshenko. (‘She also has amazing hair’, said Ronan Farrow, the 26-year-old son of Mia, who has been handed his own politics show on the politically correct MSNBC network in the US; with insights like these, MSNBC’s rock-bottom ratings are unlikely to be reversed soon.) Tymoshenko was released from prison following the uprising, and is now playing an influential role in the new interim government. But few outside of Ukraine seem to realise that neither her nor her Fatherland party are that popular. Fatherland did come to power following the Orange Revolution in 2004, but Tymoshenko lost the presidential election in 2010 and Fatherland has remained a minority party since. According to observers, Tymoshenko is ‘regarded with suspicion by most Ukrainians’, and viewed as the leader of a ‘discredited political class, widely seen as corrupt and elitist’.

Now opposition parties have control of parliament, something they were unable to obtain by means of elections. And rather than seek to win over the Russian-speaking areas of the country and attempt to unite Ukraine, one of the post-uprising parliament’s first moves was to pass legislation prohibiting the use of languages other than Ukrainian (such as Russian) in government settings. This seemed to confirm the fears of many Russian speakers in Ukraine opposed to the protesters.

Another reason to question the democratic authority of the uprising – one quite central to understanding what’s driving events – is the role of the West. External forces, from Europe to the US, have provided legitimacy, encouragement and hands-on assistance to the opposition. As Brendan O’Neill argues on spiked, the overthrow of Yanukovich is not a revolution but Western-backed regime change of the kind we’ve seen for decades in the Third World.

It’s not that the EU was cheering from the sidelines – it has been directly involved. What gave the Polish, French and German foreign ministers the right to negotiate new arrangements that led to the dismissal of an elected government in Ukraine? As Friedman notes, these foreign powers ‘ignored the constitution of Ukraine’ and pressured Ukrainians ‘to deviate from constitutional democracy in order to create a new one’.

A photo in the New York Times of Catherine Ashton, the EU’s foreign-policy chief, shaking hands with Tymoshenko in Kiev really sums things up. Ashton is an unelected official who has zero democratic backing. Ashton’s presence alone gives the game away: this was an undemocratic stitch-up.

The protesters and opposition politicians who have placed their faith in Ashton and the EU are in for a rude awakening. The EU really doesn’t have the resources to assist Ukraine economically. The latest estimate is that Ukraine needs a staggering $35 billion through to the end of 2015. The EU doesn’t have money for members like Greece, Spain and Portugal, never mind Ukraine. And the idea that Ukraine will join the EU is fantasy.

After egging the protesters on, Ashton turned up in Kiev empty-handed. She and her fellow Eurocrats are now saying they have to wait until new elections in May before discussing financial assistance. That leaves hard-pressed Ukraine in the lurch.

The talk now is that the EU and US will wipe their hands clean of Ukraine, and outsource the job of financial help to the International Monetary Fund (IMF). But IMF assistance comes with harsh terms, which it is not clear the new government, or the Ukrainian people, will be willing to accept. The West attacks Putin for meddling, but then has no problem in suggesting that Western institutions can dictate reforms that must accompany any assistance.

But the EU and US may not be able to distance themselves from Ukraine now. It may be a case of, ‘you created this mess, now you own it’. There’s even the future possibility that the east and south (Crimea) may break off and join Russia, leaving a smaller and weaker Ukraine for the West to deal with.

What, exactly, have the EU and US been playing at in Ukraine? As noted, they have no intention of committing the serious money that is needed to stave off economic crisis. They have gone out of their way to antagonise Russia, while knowing all along that, if the worst happened and Russia decided to send troops into Ukraine (as it did in Georgia in 2008), they have no will to back up their stated support for Ukraine with military action.

The Western powers have been posturing over supporting human rights in Ukraine at the expense of the people of the country. Some in the US have claimed the Obama administration has been too inactive, and has let things spiral out of control. In reality, the US has been too active and interfering, albeit working more behind the scenes than the EU powers. US state department official Victoria Nuland caused a scandal earlier this month when a leaked recording of her telephone conversation with the US ambassador to Ukraine caught her saying ‘Fuck the EU’. That was not the real scandal (I mean, who hasn’t said or heard that?); no, the real scandal of that call was that Nuland was designating which members of the Ukrainian opposition were and weren’t acceptable to run the government after Yanukovich’s downfall.

Any lasting solution in Ukraine has to lie with the people themselves, not outside powers. Right now, it is hard to see how things can work out favourably, but EU and US interference only makes matters worse. Western bluster and empty promises have given false hope to the people in the western part of Ukraine, and have raised fears among those in the east and south of Ukraine. The EU and US may be incompetent imperialists, but imperialists of any kind are unwelcome.