The shameful silence on the Taliban’s war on women

Why Western progressives are so unwilling to criticise Islamic tyranny. 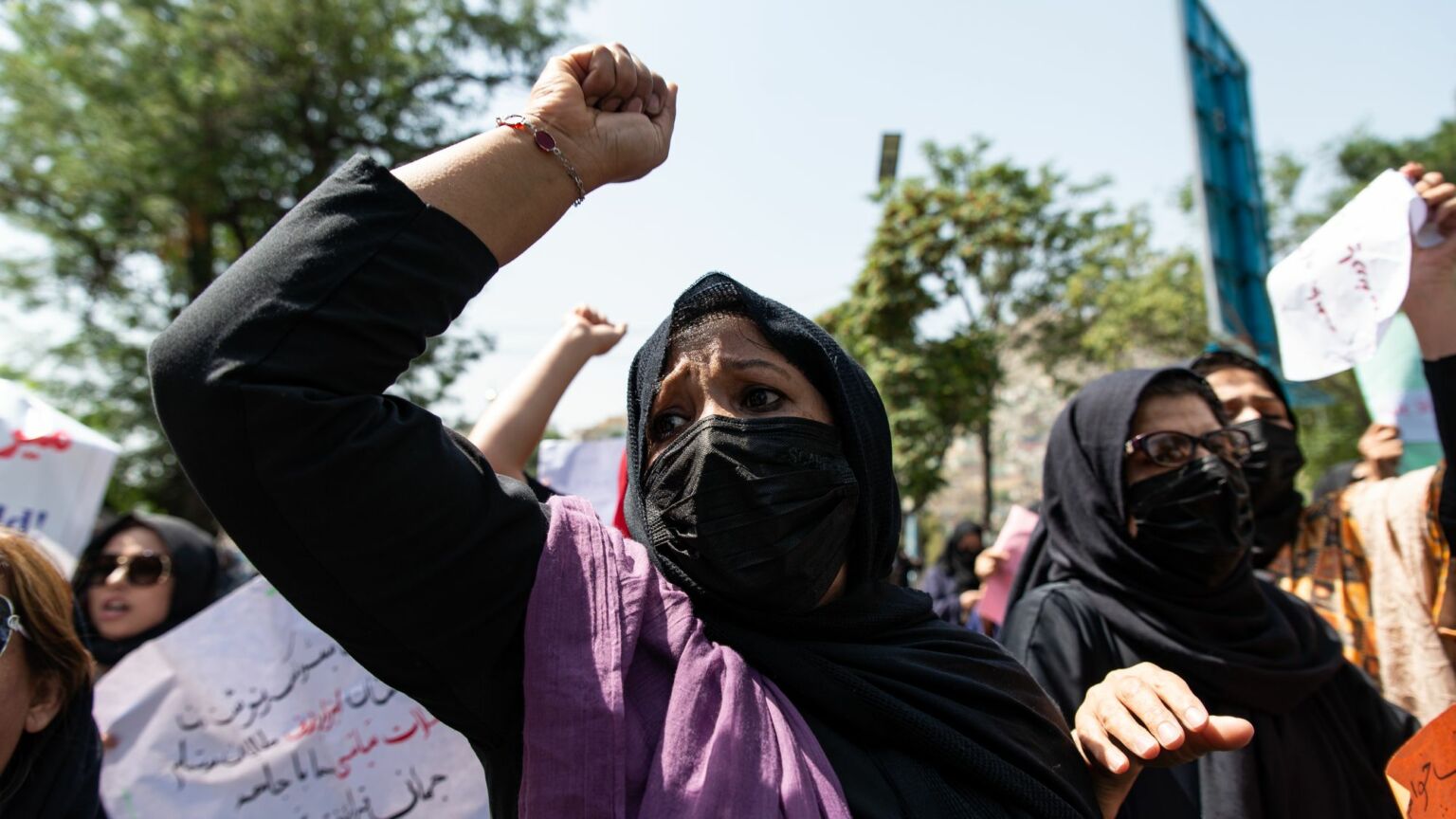 Two images of men are seared into my mind from the month of December. In the first, brave lads in Afghanistan, about to sit a university exam, get out of their seats, pick up their exam papers, and leave. They were protesting against the Taliban’s obscene ban on women attending university. It was a moving act of solidarity, a courageous display of moral conscience in a nation in which you can be severely punished for doing such a thing. The men jeopardised their education to take a stand against the vile misogyny of their government.

In the second image, a row of men in Holyrood, the Scottish parliament, applaud as Nicola Sturgeon’s gender-ID bill is passed. The men look nothing like our modestly dressed heroes in Afghanistan. Their attire is eccentric. They have long, strangely coloured hair. They don’t even think of themselves as men – they claim to be women. And their gesture was about as far from an act of solidarity with women as it is possible to get. They were cheering the passing of a bill that will make it ridiculously easy for a man to be legally recognised as a woman. Where those valiant Afghans were fighting for the right of women to enter into the sphere of education, the grinning trans activists in Holyrood were fighting for the right of men to enter into women-only spaces. The former want women’s rights expanded; the latter want them shrunk.

Nothing better captures the moral degeneracy of the modern West than the contrast between these two events last month. It was nothing short of despicable that as women were violently cast out of universities in Afghanistan, reduced to second-class citizens in the most brutal fashion, the issue that was occupying the minds of the supposedly virtuous here in the UK was the right of men to say: ‘I’m a woman!’ Valorous men in Afghanistan put their necks on the line for a woman’s right to learn alongside men. Right-on, pronoun-declaring, vegan men in the West put nothing whatsoever on the line for a man’s right to get undressed alongside women.

There’s a last days of Rome feel to all this now. Only a society that had become utterly untethered from sense and reason could devote so much energy to the navel-gazing gender ideology. Only a society that had become completely myopic could wang on about ‘women with penises’ even as actual women – no penises – in Afghanistan and Iran are being beaten and murdered for wanting basic rights. What kind of society turns away from the massacre of hundreds of women in Iran for the crime of wanting to show their hair in public so that it can focus on giving men the right to show their penises in women-only spaces?

We need to talk about why the Taliban’s revenge on womankind has not made waves in the West. In December, Afghan women were banned from universities and from working for NGOs. Yes, there has been media coverage of these misogynistic atrocities. Yes, there has been condemnation. But these tyrannical acts do not agitate the consciences of Western progressives anywhere near as much as issues like trans rights or climate change. In December, Britain’s woke set raged far more against ‘TERFs’ who oppose Sturgeon’s gender bill than it did against the sexist despots of Afghanistan and Iran.

This treachery of the progressives tells us a great deal about our times. First there’s the fact that we can’t even define what a woman is anymore. And how can you offer solidarity to women if you don’t know what they are? Are these people going to march behind banners saying ‘Solidarity with Iran’s people who bleed’ or ‘Defend the rights of Afghanistan’s cervix-havers’? The demolition of language has consequences. In this case it has the consequence of robbing people of the capacity to understand the sex-specific nature of oppression in places like Afghanistan and Iran. Minds addled by gender dogma lose the ability to think clearly about sex.

Indeed, so morally unbalanced is the trans cult that it ends up doing in a softer way what the Taliban does – erase women. No, trans activists are not the same as Taliban tyrants. Women in the UK do not suffer anything like the humiliating unfreedom being visited upon women in Afghanistan. No one benefits from downplaying the horrors of Taliban rule by inappropriately comparing them to crap that happens over here. And yet a strange urge to delete women from public life grips both the woke Westerner and the Eastern Islamist. The Taliban does it with black cloth and brute law. The neo-misogynists of the West do it through the manipulation of language, so that even using the word ‘woman’ has become problematic. You have to say ‘cis women’. Or ‘menstruators’. The Taliban erases women in order that religious men won’t feel offended; the woke set erases the language of womanhood in order that men who think they’re women won’t feel offended.

Then there’s the scourge of relativism. The West’s unwillingness to make moral judgements has undoubtedly contributed to the relative quietness on Afghanistan and Iran. People madly ask if our societies are really any better than theirs. Mona Eltahawy chastises the ‘white women cheering Iranian women’ by asking them to think about the ‘white, Christian zealots’ in their own nations. This echoes Barack Obama’s comments in 2015 about the West not being best placed to criticise the religious violence of ISIS: ‘Lest we get on our high horse… remember that during the Crusades and the Inquisition, people committed terrible deeds in the name of Christ.’ Western self-loathing stymies Western solidarity with oppressed peoples. The luxurious anti-Westernism of privileged activists means they never have to raise their voices for people experiencing oppression today. It’s moral cowardice masquerading as historical awareness.

Moral relativism is nowhere clearer than in phrases like ‘Islamophobia’ and ‘hijabophobia’ (that’s ‘hostility towards the hijab’). Here, the act of making a moral judgement is not only discouraged – it’s pathologised. Criticise Islam or the veil and you’re phobic – ill, unhinged. How are young Westerners brought up on such severe strictures against criticism of Islam meant to condemn the authorities in Afghanistan and Iran? It is virtually impossible to agitate against the Taliban’s misogyny or Iran’s forced veil-wearing without breaking at least one of the rules against questioning Islam. We should not be surprised that Western societies awash with new forms of blasphemy law that forbid any reproach of Islam have little to say when Islamic governments behave in a disgraceful way.

No, we do not need Western intervention in Afghanistan. There’s been enough of that. But we could do with more noisy, practical solidarity with the women there, and the women in Iran, who are experiencing intolerable levels of bigoted repression. Certainly we should ask ourselves how we came to be so morally disorientated that we can no longer say what a woman is, or that there are issues with Islam, or that a free, equal society like ours is better than an unfree, unequal society like Iran’s or Afghanistan’s. It’s so clear now: our moral disarray is an increasingly destructive force.