Joe Biden and the rise of respectable authoritarianism

In 2022, the Democrats proved themselves to be the real threat to democracy. 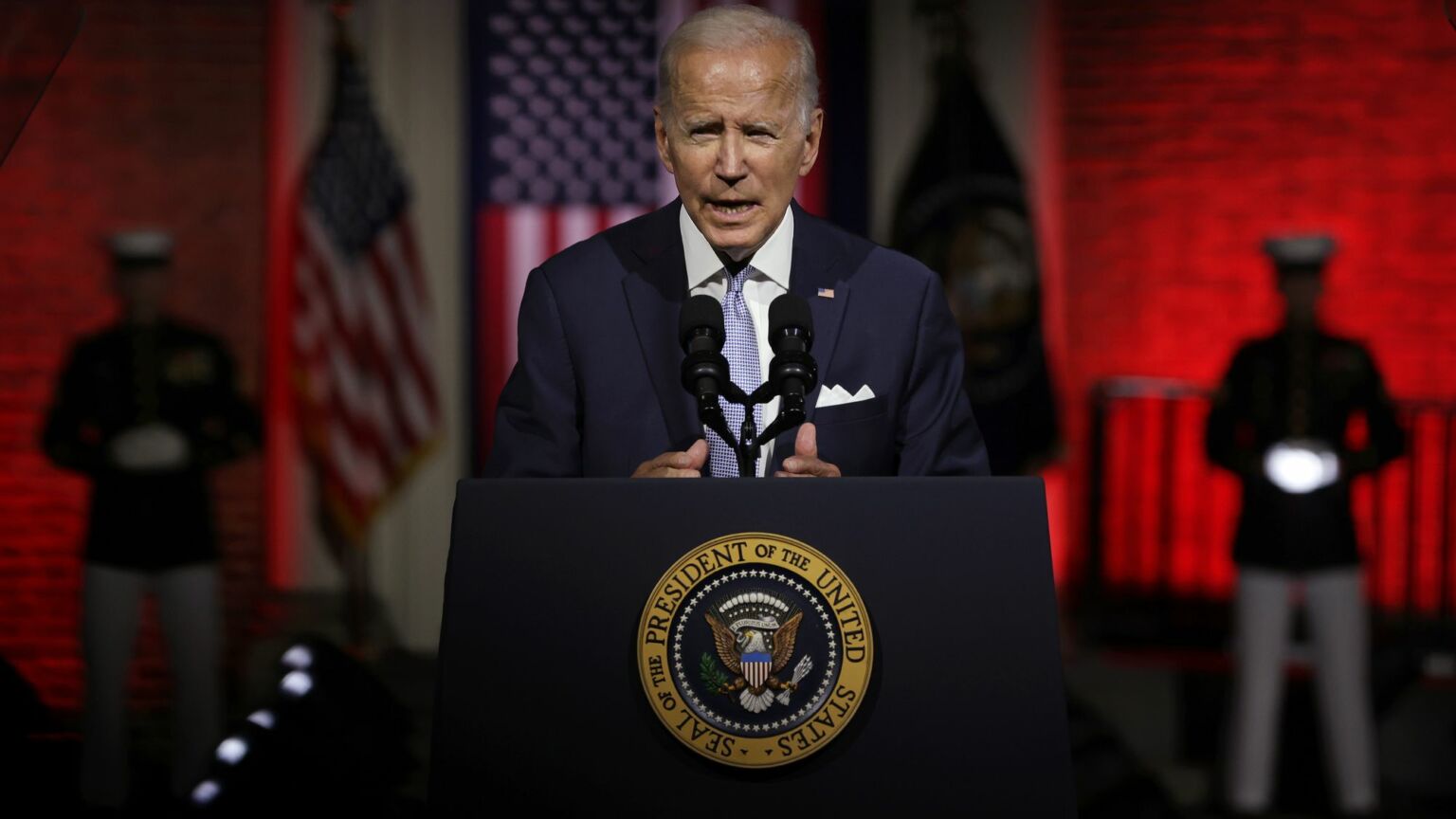 Donald Trump exited the White House many months ago. Yet, in 2022, Joe Biden and his fellow Democrats talked about him endlessly. The House of Representatives’ ‘January 6’ committee provided a year-long infomercial condemning Trump for conspiratorial and criminal behaviour. The Democrats’ Midterms campaign was also focussed on opposing Trump, even though he wasn’t on the ballot. The most striking and bizarre image of the year came in September, when a ‘Dark Biden’ stood in front of Independence Hall in Philadelphia to denounce Trump and his fellow ‘MAGA Republicans’. He was illuminated in blood-red lighting that drew comparisons with the aesthetics of Nuremberg rallies.

Not only did Biden and the Democrats obsess over Trump in 2022, but they also escalated their rhetoric about him to new extremes. The ‘January 6’ committee and its media mouthpieces constantly referred to that rally / riot on the Capitol as an ‘armed insurrection’. Biden smeared Trump and his supporters as ‘‘semi-fascist’.

Such exaggerated rhetoric has one simple goal: to demonise Trump, to make him out to be much more of a threat than he really is. Yes, the former president exhibits authoritarian tendencies. But what is striking is how lousy he is at putting them into action. His ‘Stop the Steal’ nonsense after the 2020 election was anti-democratic, but he never came close to overturning the election result. His recent call to ‘terminate’ the US Constitution evinced disdain for the supreme law of the country, but there was zero chance that anything would come from it.

Over the past year, Trump’s sway over American politics has declined significantly – and yet the Democrats became more obsessed with him than ever. Trump spent most of the year quietly tucked away in Mar-a-Lago. Most of his handpicked Republican candidates for the Midterms were defeated. His announcement that he would be running for president again in 2024 was greeted with a yawn. This ‘foundational threat to the republic’ ended the year hawking digital trading cards of himself photoshopped as a superhero and a cowboy, for $99 apiece.

The Democrats claim to hate Trump, and many of them hope to see him thrown in jail. But the reality is they desperately need him. Biden continually resurrects the Trump bogeyman as a foil to define himself against. You could say that this is a ploy of political expediency. In the Midterms, Biden’s warnings about Trumpism were a useful distraction from inflation, urban crime and the other failings of his administration. You could say it worked, as the Democrats hung on to Senate seats and avoided a ‘red wave’.

But there is more to the Democrats’ anti-Trumpism than partisan politics. It provides a moral basis to their rule (‘We’re saving democracy, we’re fighting fascists’). It also offers a rationale for exerting greater state control over political life and society. Biden and the Democrats use the spectre of Trump to assert their own brand of authoritarianism – a version less obvious and more sophisticated than Trump’s, but authoritarianism all the same.

The debate over ‘election denialism’ reveals how the Democrats’ criticisms of Trump do not mean they are principled defenders of democracy. In a speech at Union Station in Washington, DC in November, Biden warned that ‘extreme MAGA Republicans aim to question not only the legitimacy of past elections, but elections being held now and into the future’. Yes, casting doubt on elections does damage democracy. But Democrats are just as guilty of this as ‘MAGA Republicans’. Democrats claimed Trump’s election in 2016 was illegitimate due to Russian influence (and many still believe that). Leading party figures backed Stacey Abrams’ claims that the Georgia governor race was stolen from her in 2018. And Biden himself showed doubts about democracy when he described Georgia’s changes to its election laws as ‘Jim Crow 2.0’, adding that those laws could make the Midterm elections in Georgia ‘illegitimate’.

When it comes to elections, Democrats are just as conspiratorial and anti-democratic as the wackiest Trumpists. In October, Hillary Clinton popped up to pre-emptively question the legitimacy of the 2024 election. ‘Right-wing extremists already have a plan’, she says in a video, ‘to literally steal the next presidential election. And they’re not making a secret of it.’ Hillary and her friends call their campaign ‘Crush the Coup’, which sounds awfully similar to Trump’s ‘Stop the Steal’. But not to worry – the Democrats’ election denialism is the good kind.

If Biden and the Democrats simply criticised Trump for his attacks on democracy, it would be hard to disagree. But they don’t stop there. The Democrats’ denunciations of Trump and his followers are always a prelude to the censorship or repression of those who disagree with them. It’s a classic authoritarian move – ‘my enemies are so evil and dangerous that every illiberal action we take is justified and moral’.

The Democrats’ authoritarianism is more pervasive and censorious than anything Trump ever tried. In the Biden era, it is the Democrats who increasingly favour government and corporate control of political discourse, especially on social media. A Pew poll in 2021 found that 65 per cent of Democrats agreed that the US government should take steps to restrict false information online, even if it limits freedom of information. Only 28 per cent of Republicans shared that view.

Biden and his team have pursued this speech-control mission with passion. Earlier this year, his administration set up a new Disinformation Governance Board to combat ‘misinformation, malinformation and disinformation that threatens the security of the homeland’. This would-be Ministry of Truth was soon disbanded after a backlash. But there are now reports that the board has re-emerged, continuing its monitoring of social media, only this time behind closed doors.

Attempts by Biden and the Democrats to limit speech go well beyond the clumsy and ill-fated Disinformation Governance Board. As the ‘Twitter Files’ have revealed, internal Twitter documents show the Biden 2020 campaign pressed Twitter and other social-media organisations to ban critics or remove damaging stories. Most notoriously, the Biden team sought to suppress the New York Post’s Hunter Biden laptop story, joining former intelligence officials in calling it ‘Russian disinformation’. The Democrats then joined with the US security state in calling for Trump to be deplatformed from social media after the Capitol riot.

As the Biden campaign morphed into the Biden White House, it continued to collude with the Big Tech firms to censor voices, especially those who dissented with Biden’s Covid policies, such as lockdown and vaccine mandates. Periodically, representatives of the tech giants are hauled up before Democrats in Congress and scolded for not censoring enough. With Elon Musk’s liberalisation of Twitter’s content-moderation policies, Democratic representatives are warning Facebook and others not to reduce their censorship of ‘misinformation’, which Democrats effectively define as information that they don’t agree with. This strong-arming of social media to restrict public discourse should alarm us all.

At that ‘blood red’ speech in Philadelphia, Biden’s words were just as ominous as the setting, delivered with a menacing tone. He cast a wide net, effectively declaring all Trump voters (some 70million Americans) as a threat to the country. He then served an effective warning to them – if you express views that we associate with Trump and Republicans, we can deploy the powers of the state against you.

As it happens, such powers have already been used against parents protesting against school boards, who Democrats have attempted to treat like domestic terrorists. Last year, Biden’s attorney general, Merrick Garland, directed the FBI and US attorneys to investigate ‘threats of violence’ against school administrators and teachers. The order was an outrageous attempt to intimidate parents protesting against racially divisive and gender-identity content in school lessons. It sent a chilling message to parents – ‘if you protest, don’t be surprised if the FBI comes knocking on your door’.

In his Philadelphia speech, Biden said: ‘There is no place for political violence in America. Period.’ But, again, from his one-sided perspective, only Trump-related aggression counts as political. Meanwhile, Biden pointedly refused to criticise the mobs that gathered outside Supreme Court justices’ homes, after the conservative court overturned Roe v Wade. Even after an assassination attempt on Brett Kavanaugh, Biden remained silent. This silence sends a message – political intimidation is acceptable, so long as it is aimed at Biden’s opponents. We’re starting to get into dangerous territory here.

You could say that the US faces a battle of authoritarianisms – an unacceptable, crude Trumpian authoritarianism, and a respectable, ‘morally’ driven Biden authoritarianism. But it’s really no contest between the two. Biden and the Democrats have the forces of the media, Big Tech and the security state on their side, not to mention the executive powers of the White House. Trump has a dwindling band of followers. The scope of Democrats’ reach into our social and political lives, including limits on speech, extends more widely than anything Trump has tried. And while Trump is an incompetent authoritarian, the Democrats’ version is much more disciplined and (unfortunately) effective.

In 2022, it became more apparent that Biden and the Democrats’ anti-Trumpist rhetoric is a means to justify their own authoritarian impulses. Defenders of civil liberties and democracy should now have a better idea of what they will be up against in the new year.