Will Sunak give in to the EU over Northern Ireland?

The Northern Ireland Protocol is an affront to UK sovereignty. The PM must stand strong in Brussels. 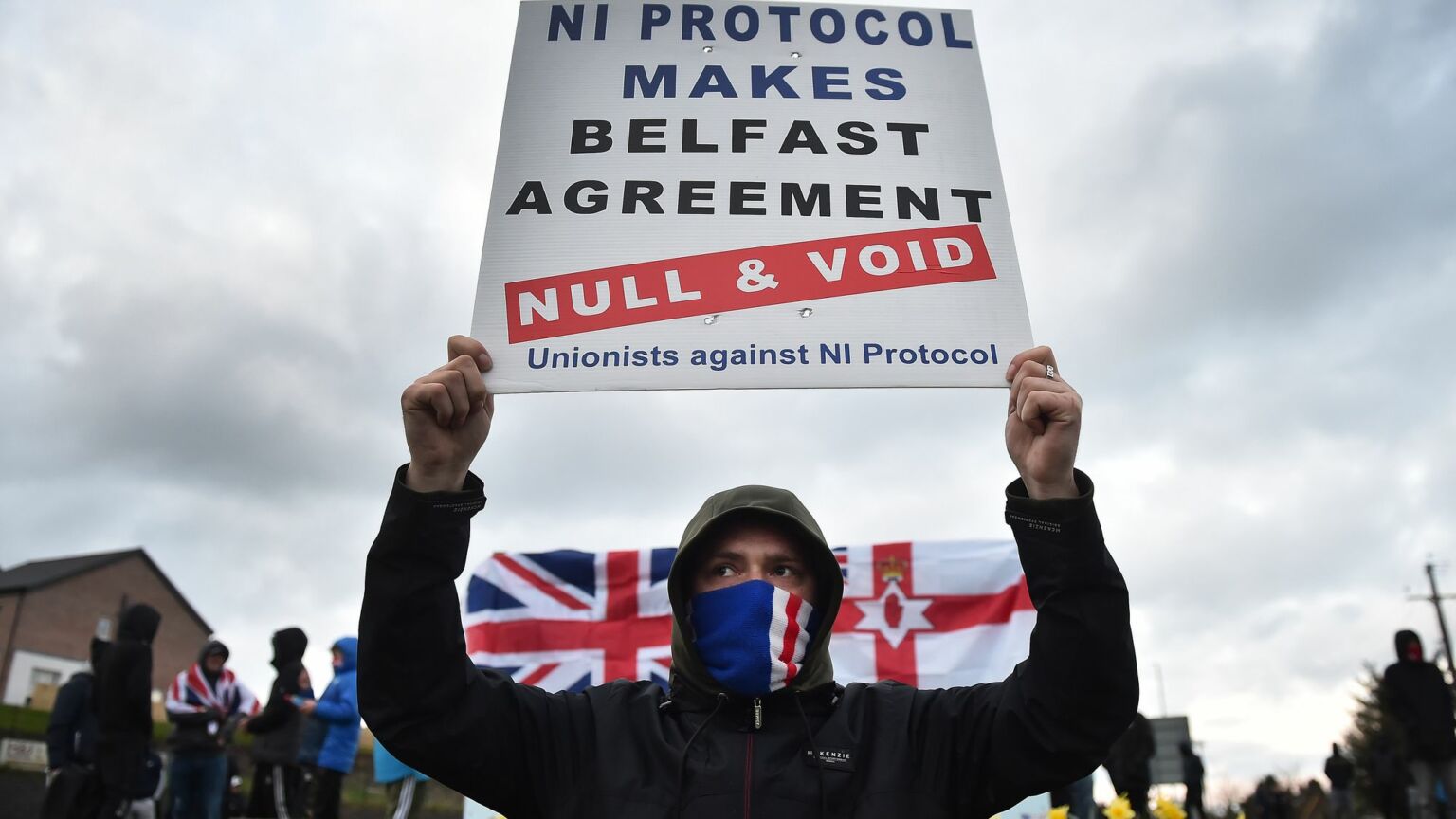 One of the bigger risks the UK government is running is that it will fail in its attempts to reform the Northern Ireland Protocol, leaving the Good Friday Agreement stranded. Rishi Sunak’s inheritance on this front was reasonably promising, but it risks being squandered.

On the surface, government policy on the protocol remains the same as was laid down in Lord Frost’s July 2021 command paper. It set out four key aims for the negotiations with the EU. Firstly, to ensure that full customs and sanitary and phytosanitary (SPS) checking processes are applied only to goods destined for the EU, and not those going from Great Britain into Northern Ireland. Secondly, that the regulatory environment in Northern Ireland should allow goods regulated by UK authorities to circulate freely in Northern Ireland, as long as they remain within Northern Ireland. Thirdly, that the relationship between the UK and the EU is not ultimately policed by the European Court of Justice. And finally, that there should be reduced EU involvement in VAT rates and structures. To protect the EU Single Market, the UK is willing to introduce export controls described as ‘new legislation to deter anyone in Northern Ireland looking to export to Ireland goods which do not meet EU standards or to evade these enforcement processes’.

Because the EU has been reluctant to even discuss the UK’s wishes, the government introduced the Northern Ireland Protocol Bill in June this year. Controversially, this provides UK ministers with the right to unilaterally advance the aims of the command paper. In particular, this includes the right to introduce customs-free ‘green lanes’, which remove unnecessary costs and paperwork for goods traded within the UK. ‘Red lane’ paperwork would remain for goods from Great Britain passing through Northern Ireland to the Republic of Ireland. Accusations that this legislation would contravene international law have made it difficult to get through the House of Lords. This is a major concern for a government with limited time and many other priorities. However, claims that the bill has been put on ice seem to be untrue.

Under Boris Johnson and later under Liz Truss, there was reasonable confidence the bill could progress, although the Lords remained a potential problem. Even so, growing unease among Unionists in Northern Ireland led the DUP to refuse to establish a new executive at Stormont following the May 2022 assembly elections. The DUP continues to refuse to go back into government until the Protocol Bill is passed at the very least. It may even wait until the UK actually uses the powers in the bill to override the protocol. Unionists were initially most concerned with the economic problems caused by the protocol. Subsequently, they have grown more alarmed by the damage to Northern Ireland’s constitutional position from a customs border in the Irish Sea.

With Rishi Sunak as PM, the outlook is less certain. Although he backed the removal of the protocol during this summer’s leadership campaign, as chancellor he had previously warned that taking too strong a stance might provoke a trade war with the EU. Since Sunak became PM, UK relations with the EU are said to have warmed, with EU expectations rising for a deal on the protocol. Such a deal seems likely to involve minor rather than major changes to the protocol, and so would be unlikely to meet the DUP’s demands. The EU already claims to have made an 80 per cent reduction in customs administrations in its October 2021 ‘non-paper’. Lord Frost later pointed out that these proposals involved no reduction in the number of customs declarations, but instead a reduction in the number of lines of detail required in each declaration. The actual reduction in cost and effort for firms was small.

None of this cut much ice with the DUP. For the DUP, the protocol undermines the Good Friday Agreement by imposing major changes in the governance of Northern Ireland without the consent of the Northern Ireland Assembly. The late Lord Trimble, the Nobel Prize-winning architect of the Good Friday Agreement, argued in July 2019 that the protocol drives a coach and horses through the Good Friday Agreement. Unionists also take the view that the cross-community consent for major decisions in the assembly, seen as an integral safeguard against being unwillingly absorbed into a united Ireland, was now being interpreted as applying merely to the last step towards unity.

The UK government can argue that its primary duty is preserving the Good Friday Agreement and that this trumps its treaty obligations in the EU Withdrawal Agreement. In May, then attorney general Suella Braverman claimed the right of necessity to rip up the Northern Ireland Protocol. However, it is less than obvious that a Sunak administration wishes to use these arguments to force through the aims of the 2021 command paper. Technical talks with the EU have been proceeding for months, but these are largely concerned with the EU’s real-time access to customs declarations collected by HMRC on goods entering Northern Ireland from Great Britain. There is little in these talks to advance the command paper’s aims.

Additional contacts between London and Brussels are said to be taking place and these may be where the real action lies. However, even those in parliament who might be expected to know have little idea of who or what is involved in such contacts. There are real concerns from those close to the issue that there is too little political drive to achieve the necessary reforms. Any optimism relies on Brussels growing bored of the issue, as reported by RTE Europe editor Tony Connelly, and on the EU’s desire to remove a running diplomatic sore.

The key danger from a failure to meet DUP demands is the collapse of the Good Friday Agreement. Even worse is the incendiary pressure from the Alliance Party, potentially backed by the Irish government, to remove from the Good Friday Agreement the need for cross-community consent for major political decisions. This would destroy Unionist support for the agreement. The UK government knows this and is likely to prefer direct rule in perpetuity.

In July 2021, the DUP announced seven tests for judging reforms to the protocol. These largely reflect the command paper, with two key demands that there be no border in the Irish Sea and no diversion of trade. The latter is easily achieved, since new trade data from HMRC and from NISRA show high levels of trade between Great Britain and Northern Ireland, with no obvious negative effects from the protocol operating under the ‘grace periods’, which have been in force since January 2021.

The key change would be to avoid the need for customs declarations for goods destined for either consumers or producers based in Northern Ireland. Some basic commercial data could still be collected and made available to the EU using existing software, but crucially this would not be customs data, and so the Irish Sea would not constitute a customs border. The data would merely be administrative support for the export controls proposed in the command paper, which themselves could be an extension of the 2002 Export Controls Act. The basis for all of this is greatly helped by recent opinion polls which show two-to-one support among Northern Irish citizens for remaining in the UK, with Catholics in the north being less keen on Irish unity than the largely Catholic population of the south, although both support it. If the Union is not at stake, Unionists can be more relaxed about the protocol.

There is a way through this impasse, but it requires determination from Westminster, flexibility from Brussels and a sense of realism from the DUP about what can be achieved.

Graham Gudgin was special adviser to the first minister in Northern Ireland from 1998 to 2002.