The assault on van Gogh’s Sunflowers is a repudiation of human civilisation. 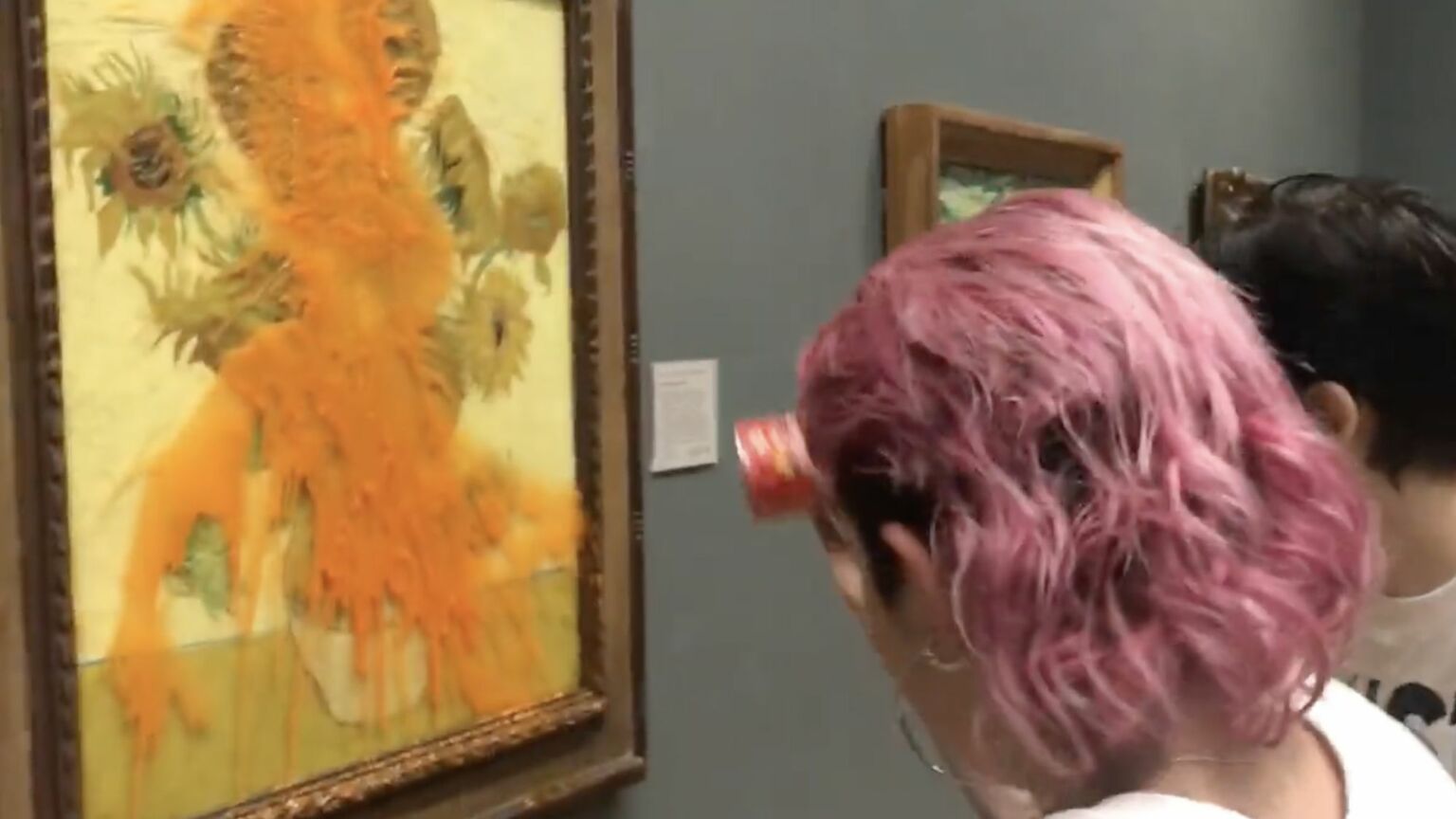 Vincent van Gogh’s Sunflowers captures a rare moment of optimism in an otherwise troubled life. In February 1888, van Gogh rented a property in Arles in the south of France, which was to be known as the ‘Yellow House’. He envisaged this to be a haven for artists, and had invited Paul Gauguin to join him. His hope was to decorate the house with paintings of sunflowers, 11 of which were eventually produced (one was later destroyed in an air raid in Japan). With their bright and striking yellow tones, these paintings are infused with van Gogh’s sense of hope and possibility – a stark contrast to the ominous dark violet blues of the self-portrait produced at the asylum at Saint-Rémy, a year before his suicide.

The impact of Sunflowers is such that it has acquired iconic status, which would explain why, earlier today, activists from Just Stop Oil chose to douse it in tomato soup in an effort to draw attention to their cause. The two young women who vandalised the painting knew that the footage would go viral, and that people like me would write articles about it. In the online clips, one of the activists asks a rhetorical question: ‘Are you more concerned about the protection of a painting or the protection of our planet and people?’ Her accent is plummy and clipped. No great surprise there – we have grown accustomed to being hectored about oppression by the most privileged in society.

Those who are sympathetic to their cause were quick to defend these actions, and to note that the painting sustained no damage due to its glass covering. ‘Spilling soup on glass isn’t a major offence’, one person tweeted. ‘Personally it moved me’, said another. ‘I thought, hell, I really hope humans can see this painting in a thousand years’ time. They won’t if civilisation is destroyed by floods.’ The visceral impact of the sight of a desecrated masterpiece is precisely the point. The activists intend to unsettle, and in this they have succeeded.

But the gesture is also reflective of a troubling seam that runs through the ideology of so many of today’s activists. For those who self-identify as being ‘on the right side of history’, there is a sense that Western civilisation itself is a cancer that must be destroyed. It has been built on heteronormative, white-supremacist and cis-patriarchal power structures that perpetuate injustice and bolster the elites.

Many of the environmental activists of today are products of this identity-obsessed worldview. This is why Extinction Rebellion co-founder Stuart Basden has argued that his movement ‘isn’t about the climate’, but is concerned with overturning white supremacy, the patriarchy, Eurocentrism, heteronormativity and class hierarchy. As another activist puts it: ‘Environmental justice is the intersection of both social justice and environmentalism, where the inequity in environmental degradation is also considered.’

According to the high priests of this new religion, this is the lens through which all human endeavour, including the creative arts, must be viewed. As such, the Mona Lisa is reduced to little more than oils and pigments daubed on to poplar wood by a powerful white male for the benefit of other powerful white males. Art is reduced to an elaborate power-grab, which is why museums and libraries are so often targets for ‘decolonisation’. This also accounts for the lack of scruples of the activist who smeared cake on to the Mona Lisa in May, also in an effort to raise awareness of climate change. ‘Think of the Earth!’, he cried, ‘there are people who are destroying the earth!’.

One witness reported that the Mona Lisa vandal had attempted to break the protective glass in an effort to damage the painting itself. This is why I am unconvinced that the Just Stop Oil activists at the National Gallery would have hesitated to deposit their tomato soup on van Gogh’s masterpiece were the glass not in place. We are dealing with a catastrophising mindset that sees art as little more than a futile hobby, a distraction from the greater cause. The activists said as much themselves. To them, Sunflowers is just ‘a painting’.

Great art represents the height of human achievement, offering us those rare glimpses of the numinous that enliven our existence. For intersectional activists, art and literature are merely further manifestations of the will to power. We have seen this in recent trends in criticism, by which art is judged on the basis of whether or not it accords with the approved ‘message’. Faced with a piece as monumental as Picasso’s Guernica, could these activists see anything other than the labour of a misogynist who mistreated his wives and mistresses, a tribute to oppressive patriarchal systems of control?

Attacks on art have such a visceral effect because we understand that they represent a repudiation of human civilisation. When Salman Rushdie saw televised images of his book, The Satanic Verses, being burned on the streets of Bradford in January 1989, he was overwhelmed with the sense that ‘now the victory of the Enlightenment was looking temporary, reversible’. The incineration of one copy of a book may be harmless, but the symbolism of the gesture is potent and ugly.

The destruction of art is always an authoritarian act, which is perhaps why it is so appealing to present-day activists who see the values of Western civilisation as essentially toxic. Whereas the civil-rights luminaries of the past opposed authoritarianism in all its forms, many of the self-styled activists of today’s culture wars protest in support of authoritarianism. When the body in charge of elementary and secondary schools in southwestern Ontario authorised a ‘flame-purification ceremony’, in which books containing outdated racial stereotypes were removed from library shelves and ritualistically burned, those responsible presumably believed they were on the side of the angels. I have no doubt that the members of the Taliban who demolished the Buddha statues of Bamiyan in 2001 felt much the same way.

Those activists who have such obvious disregard for the great masterpieces of history should trouble us all. The only reason the damage has been limited so far is that their targets tend to be the most famous works, those that are protected by glass. Many of our greatest treasures are not so well guarded. How long before an activist sets fire to a Titian, or carves political slogans into a Botticelli with a penknife? If you think that such philistinism is beyond them, you haven’t understood the soullessness of their creed.

Andrew Doyle is author of The New Puritans: How the Religion of Social Justice Captured the Western World.