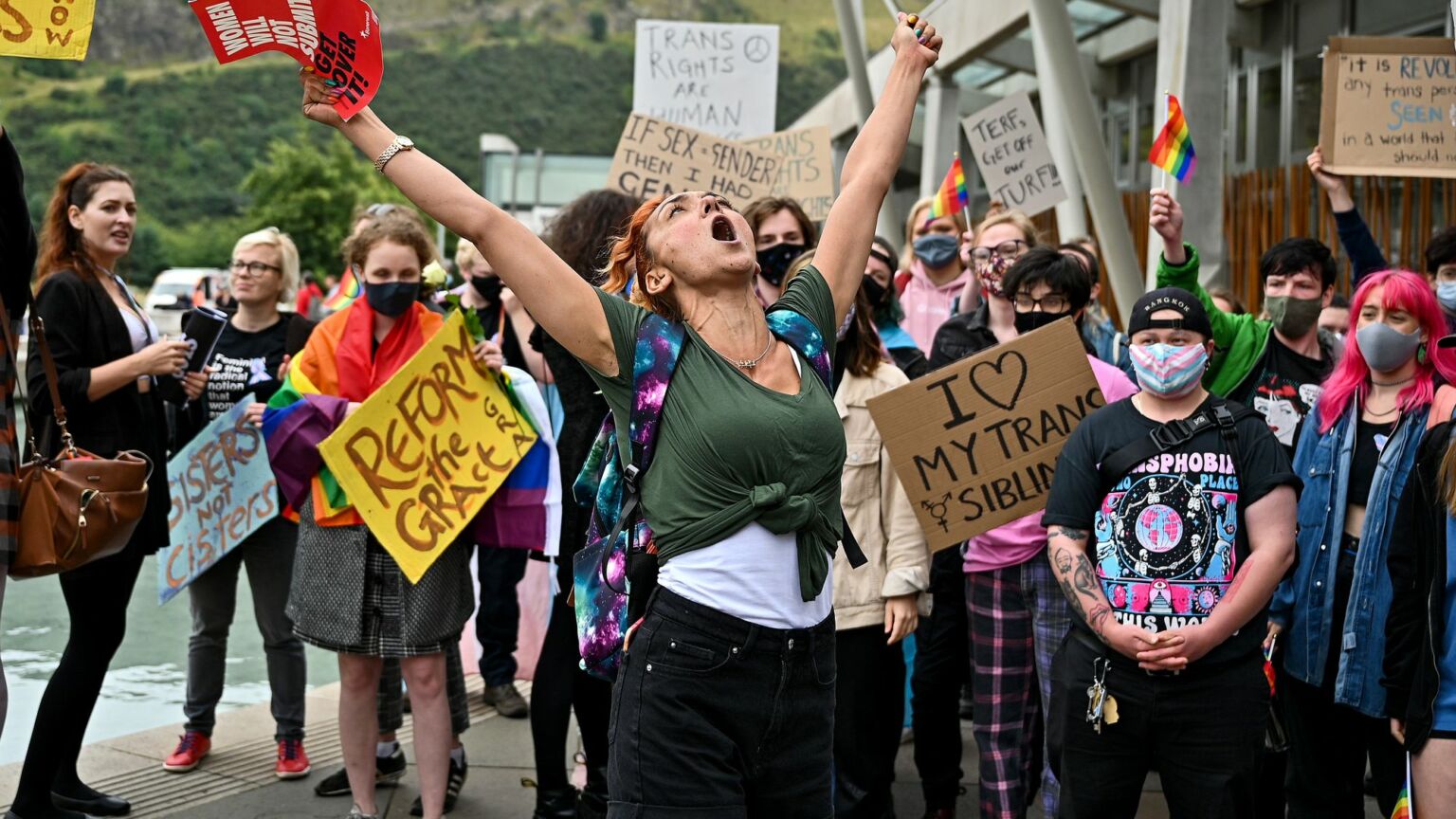 How to take on the new puritans

We cannot shy away from fighting the culture war.

My new book is about intolerance. I am fascinated by those who prefer only to associate with people who share their own identical worldview, and who interpret the slightest point of political disagreement as evidence of evil. The new religion of group identity and ‘social justice’ has driven once rational people into a state of frenzied bigotry. I want to understand why.

So, back in May, when I announced I was working on a book called The New Puritans, I wasn’t all that surprised to see so many self-proclaimed advocates of ‘social justice’ rush to demonstrate the very phenomenon that I was attempting to explore. Some suggested that they would acquire copies only to burn them. One said that he intended to kick it under the bookshop shelf ‘so that it could rot in darkness’. Another simply declared that I was ‘pure scum’. Were any of these people aware that they were proving my point?

Byline Times even claimed that I was waging ‘a perpetual battle against social justice – fighting against a contrived present world of aggressive “woke snowflakes” in order to return to an imagined past’. This was news to me, given that my book is a defence of progressive and liberal values, and it explicitly criticises those who resort to the ‘snowflake’ slur. I particularly enjoyed the suggestion that my book was an example of someone imagining enemies into existence in order to fight them. It takes some chutzpah to make such a claim of a book you haven’t actually read.

It would seem that the title alone – The New Puritans: How the Religion of Social Justice Captured the Western World – was enough to stir the ire of these culture warriors. In a sense, this is unsurprising. One of the key aspects of this ideological movement is that its adherents treat all challenges as a form of heresy that must be quashed. For all that they like to smear their detractors as ‘bigots’, they forget that the main definition of the word – ‘a person who is utterly intolerant of any differing creed, belief or opinion’ – applies most accurately to themselves.

Why is it, for instance, that JK Rowling can be so routinely monstered as ‘hateful’ and ‘transphobic’ despite having never said anything hateful or transphobic? Only this week, the Harry Potter author found herself in an exasperating Twitter exchange with someone claiming she had been ‘outwardly hateful of an entire community’. Rowling quite rightly asked for evidence, to which her detractor replied: ‘I don’t know where you said it, but I bet you do.’ For those taking part in the witch-hunt, the total lack of evidence is simply an inconvenience to be brushed aside.

This is why my book draws comparisons between the hysteria of the ‘woke’ movement and the witch hunts of Salem in the late 17th century. In a burst of collective madness that lasted a little over a year (from February 1692 to May 1693), 20 people were executed for witchcraft on the basis of the testimony of local girls. All of the prosecutions were secured on the basis of ‘spectral evidence’ – what today we might call ‘lived experience’. The girls simply declared that they had seen these innocent people sign the devil’s book, or that they had been ‘sending out their spirits’ to torment people. This was their ‘truth’, and so it had to be believed.

We see a similar logic in today’s police guidance in the UK, which says that citizens can be investigated for ‘hate speech’ based solely on the ‘perception of the victim’. And when the practitioners of contemporary cancel culture make allegations of transphobia, racism and even fascism, no evidence is required for the accused to be publicly shamed. ‘Lived experience’ is all that counts.

There are those who claim that the best response to these cultural revolutionaries is simply to ignore them and hope they go away. Such Pollyannas have not being paying attention. The high priests of this identitarian ideology now enjoy unprecedented cultural clout, and they have achieved this because the general public has been far too apathetic – or intimidated – to challenge their creed. The new puritans currently dominate all of our major cultural, educational and political institutions, and they are not going to surrender their power without a fight.

The footsoldiers of this movement are online activists who claim to be the underdogs, brave tellers of truths in an unjust world, and victims of oppressive power structures. And yet their worldview is endorsed by Hollywood, Big Tech, all major corporations, academia, the mainstream media, the United States government and the Duke and Duchess of Sussex. Far from fighting against the establishment, the woke are the establishment.

In my book, I argue that the new puritans are ‘best understood as a clergy for a godless age, presiding over a dreamscape of their own making, rewriting our language, history and traditions as they go along’. I also outline how the culture war is largely a matter of language, and who gets to define the meanings of words. Most people have capitulated to the new puritans mainly because they don’t understand their aims. These are people who use progressive-sounding phrases such as ‘social justice’, ‘anti-racism’ and ‘equity’. And who wouldn’t support that?

But perhaps a little thought experiment will help us to see what is really at stake. Ten years ago, could anyone have imagined that in a decade’s time British police would be routinely investigating citizens for ‘non-crime ’? Or that a senior member of the UK government would be arguing in favour of laws to criminalise professional comedians for jokes? Or that activists would be demanding that statues of Winston Churchill, Mahatma Gandhi and even slavery abolitionists like Thomas Henry Huxley should be torn down? Or that major corporations would be paying a fortune for visiting speakers to berate their staff for their ‘white privilege’ and telling them they should ‘try to be less white’? Or that one of the most prestigious schools in London would be segregating its pupils by skin colour for after-school activities? Or that a school district in Canada would be burning thousands of books because the contents are offensive to modern sensibilities, and that they would refer to this as a ‘flame purification’ ceremony?

Ten years ago, could anyone have possibly conceived that in 2022 politicians would be stumbling and stuttering when asked ‘What is a woman?’ and be unable to answer the question? Or that ‘woman’ would become a dirty word, and that companies, charities, media outlets and even some factions of the NHS would be favouring phrases like ‘menstruators’, ‘people who bleed’ and ‘individuals with a cervix’? Or that a man would be nominated for Woman of the Year? Or that male rapists would be identifying as female and be moved to women’s prisons, where they would go on to commit further sexual assaults? Or that gay children would be encouraged to think they were in the wrong body, and fast-tracked on to medicalisation? Or that the head of the LGBT-rights charity, Stonewall, would be calling lesbians who don’t want to include men in their dating pool ‘sexual racists’ and comparing them to anti-Semites? Or that reputable medical journals would be denying biological reality, claiming that sex isn’t binary at all, but that it’s a spectrum? Or that women would be fired from their jobs and subjected to threats of death and rape for saying that biological sex is real?

Few of us would deny that all such claims would have been dismissed as laughable just 10 years ago. No sane person would have conceded that any of these outcomes were possible in a free and liberal society. And yet here we are.

This is why we need to take action. I wrote The New Puritans in an effort to provide an accessible overview of the culture war, and to suggest some ways that we might navigate ourselves out of it. The example of Salem illustrates the human tendency for groupthink and hysteria, but it also offers us a glimpse of how we might escape. The girls in Salem are the equivalent of the activists of today, screaming ‘witch’ (or ‘TERF’) at anyone who they perceive to be challenging their dominance. But Salem would not have happened had those in authority not blindly accepted the demands of the accusers. It wasn’t really the girls who were the problem – it was the magistrates and ministers who lent credence to their lies.

Similarly, the culture warriors of the present have only been successful because the elites in our society have truckled to their bidding. All it takes is a handful of activists to make their unwarranted accusations for decent people to lose their livelihoods and have their reputations destroyed. Consider the example of children’s author Gillian Philip, who was dropped by her publisher simply for tweeting in support of JK Rowling. Or the choreographer Rosie Kay, who was compelled to resign from her own dance company after expressing gender-critical views at a gathering with dancers in her own home. Or the barrister Allison Bailey, who was labelled as ‘transphobic’ and investigated by her chambers simply for raising concerns about Stonewall’s ‘Diversity Champions’ programme. The examples are endless.

The lessons of history are there should we wish to observe them. The hysteria of Salem came to an end only once the population developed the courage to challenge the girls’ fantasies. The fear of being ‘cancelled’ is very real, but if we remain unwilling to speak out, the power of the new puritans will continue to grow. Complacency is no longer an option.

Andrew Doyle is author of The New Puritans: How the Religion of Social Justice Captured the Western World, which is out today. You can order your copy on Amazon here.