Why I will never declare my pronouns

Pronoun proclamations are a new form of religious hysteria. 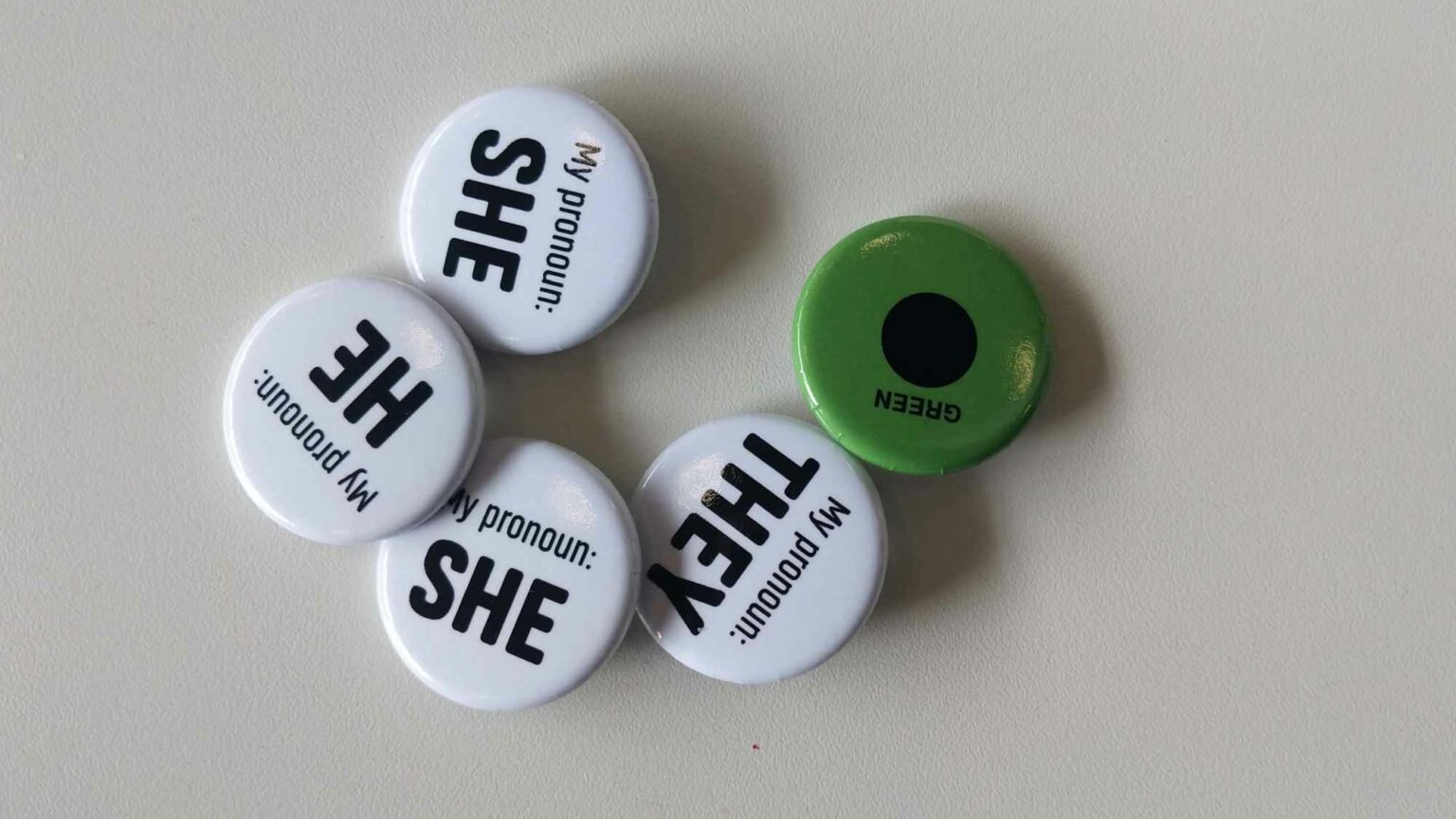 Why does Joe Biden declare his pronouns? He’s obviously a bloke. He’s 79, making it highly unlikely that he identifies as non-binary or as an agender demisexual or as a ze / zir / zirself. He goes out of his way, bless him, to appear manly, by occasionally breaking into an unnecessary jog or clenching his fists for an inordinately long amount of time in a TV debate (he looked like he was ‘daydreaming about riding a pony’, said one observer). No one, ever, is going to wonder whether he’s a he or a she or a they. We know he’s male. So why does he do it? Why did he apparently insist on being captioned ‘President Joseph R Biden, Jnr (he / him)’ in an interview shortly after his inauguration last year?

It’s because declaring one’s pronouns, plastering ‘he’ and ‘her’ all over Twitter bios and email signatures, has nothing whatsoever to do with clearing up confusion. It isn’t about providing people with useful information for how they should address you. The vast majority of people’s pronouns are exactly the pronouns you’d expect them to have. Like Kamala Harris, for example, who’s another ostentatious pronoun proclaimer, with ‘she / her’ embedded in her Twitter bio as if anyone was going to mistake this vanilla married lady for a ‘they’ or a ‘xe’. No, pronoun pronouncements are an ideological statement. They’re a loyalty oath to the ideology of woke. They’re a very publicly tugged forelock to the cultural elite and its belief system. And this is why no worker, whoever they work for, should be pressured to declare their pronouns – because no one should ever be compelled to bow down to doctrine, to genuflect to other people’s beliefs.

Everyone’s at the pronoun thing. In 2020, half of the Democratic Party’s presidential hopefuls had their pronouns in their Twitter bios. ‘Every person deserves to be treated with dignity and respect, and that starts with using correct pronouns’, said Elizabeth Warren (she / her / hers). Really? The starting point for dignity is pronoun-use? Not gainful employment, decent housing, autonomy? ‘My name is Jeremy Corbyn, pronouns he / him’, said Corbyn at the Pink News Awards in 2019. Just in case anyone thought this seventysomething grumpy old bloke famous for pottering around on his allotment is secretly a she. A clip of party member after party member taking to the stage at a recent Labour conference and saying their name and pronouns before making their point went viral, doubling up nicely as an explanation for why Labour doesn’t win elections.

Celebrities love to holler their pronouns too, naturally. Woe is often visited on those who refuse to do so. Actress Sarah Paulson is about as woke as it gets – she’s a vocal ally of gay and trans people and she’s joined in some of the unhinged mass trashings of the blasphemer JK Rowling. And yet Paulson got devoured by the children of her own identitarian revolution when she neglected to put her pronouns in her social-media bios. This led to the publication of this actual headline in Pride magazine: ‘Sarah Paulson Ignites Twitter War Over Absence of Pronouns in Bio.’ ‘So your pronouns are dumb / whore’, said one of her online critics. It was a chilling insight into the compulsion that lurks behind the pronoun performance. It’s increasingly clear that those who do not declare their pronouns shall be viewed as morally suspect, as insufficiently loyal to the new ideology, as wavering believers.

The pressure to conform, to advertise your fealty to wokeness with a pronoun statement, can be seen in the business world, too. Corporations love pronouns. ‘Big business is increasingly embracing the practice of sharing individual pronouns’, reports the Wall St Journal. Microsoft’s hyper-woke staff go the whole hog, pronouncing their race as well as their pronouns. ‘I’m Natalia. I’m a Caucasian woman with long blonde hair and I go by she / her’, said one employee in a Microsoft video. Goldman Sachs, Virgin Management and Lloyds have all made moves to encourage pronoun declaration among their workforces. It’s not always voluntary. As the WSJ says, some employees do the pronoun dance ‘at their company’s urging’. And when workers see their colleagues sticking their pronouns in everything from their email signatures to their LinkedIn profiles, ‘they feel social pressure to do the same’.

This pressure must be resisted. Last week a Twitter user ignited a furious debate when he said his wife’s employer has given her until the end of April to add her pronouns to her email signature. Doubtless there are many companies leaning on their workers to get down with the ‘diversity’ agenda. But compelled pronoun declaration is a very bad thing indeed. It’s as bad as your boss forcing you to say Christ is the true Messiah or ‘Allahu Akbar!’ or L Ron Hubbard was a stand-up guy. Indeed, there is a semi-religiosity to the pronoun phenomenon. Declaring one’s pronouns is really a declaration of one’s inner gender identity. It’s a way of saying ‘Outwardly I look like a man, but my internal gender orientation, my gendered soul, is [whatever]’. So pronoun-use is a public acceptance of the idea that there are two you’s – there’s your ‘deeply held inner [gender] feelings’, which are not ‘seen by others’, and then there’s your outward appearance, which might or might not match up with your mysterious, soul-like gender identity. Hence the need for the pronoun performance.

But what about those of us who think the idea of innate gender identity is nonsense? Who think it’s an unreasoned, unscientific claim? Who think it exists in the realm of religious fantasy, not rational observation? Who think you are born male or female (and very occasionally intersex) and that’s it? To pressure us to declare our pronouns – that is, to perform a belief in the fiction of an inner gender – is as obnoxious and outrageous as it would be to force a non-Christian to say ‘Christ is my saviour’. Compelled speech runs counter to the entire idea of liberty, and to the Enlightenment itself. No one should be ‘compelled by fire and sword to profess certain doctrines… to profess things that they do not believe’, said John Locke in his Letter Concerning Toleration. Nor should they be compelled by threats of the sack or the wailing of Twittermobs. Today’s tsunami of pronouns in work, politics and online is not evidence of widening ‘inclusivity’ but rather of the conformism and compulsion that lie at the root of the woke ideology. Heretics, step up – dare never to declare your pronouns.

Picture by: Wikimedia Commons, published under a creative-commons licence.