How our weak elites emboldened Putin

Western incoherence and Russian opportunism have led Ukraine into disaster. 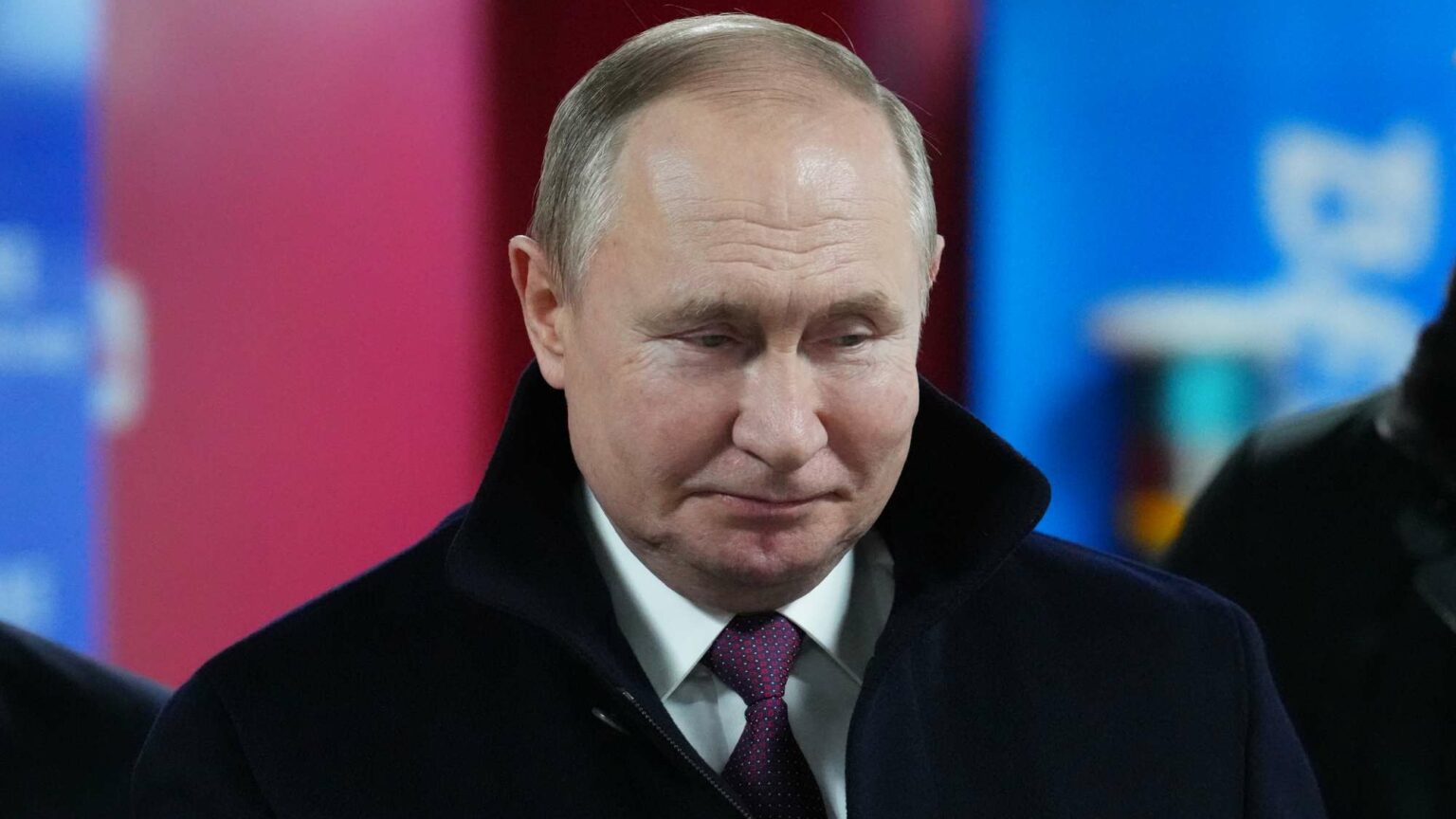 As Russian troops pile into Ukraine, and Russian bombs fall on Ukrainian cities, what are the security services in the UK focusing on? White privilege. This is not a joke. As the Daily Mail reports today, ‘Britain’s spies are being urged to consider their “white privilege” and declare their pronouns as Europe descends into war’. This comes from a leaked report on ‘improving diversity’ in the security services, written by Sir Stephen Lovegrove, the UK’s national security adviser. It also advises against using gendered terms like ‘manpower’ and even words like ‘strong’ and ‘grip’, which can ‘reinforce dominant cultural patterns’. And there you have it: as Putin plays the strongman, our security bosses are saying ze and zir and advising against inappropriate usage of upsetting words like… ‘strength’.

You couldn’t ask for a clearer snapshot of the divide between the West and Russia today. In the West, institutions are riddled with political correctness, incapacitated by wokeness, and increasingly incapable of being serious about almost any issue, including geopolitics. And in Russia there is a leader who is a keen observer of this Western ‘decay’, as he sees it. The West is beset by ‘sociocultural disturbances’, Putin recently said. Where Russia under Putin is reviving pride and nostalgia for Russian history – at least the version of history that the Putin regime prefers – in the West they pursue ‘the aggressive deletion of whole pages of their own history’, Putin says. The West is too busy ‘[teaching] that a boy can become a girl and vice versa’ to be able to defend its own traditions and truths, Putin chastises. And now we have British security bosses obsessing over pronouns as Putin spies more territory for the Russian Federation. Fiddling while Ukraine burns.

What has become clear in recent years is that there is a strange symbiotic relationship between Western incoherence and Russian opportunism. Between this ‘decay’ in the West that has led to a rejection of our own history and founding values, and even of basic scientific truth, and a seemingly emboldened Putin regime that increasingly positions itself as the opposite to all of that, as the political grown-up to the infantile West rocked by ‘sociocultural disturbances’. On sex, family, tradition and history, Putin put it as clearly as he could towards the end of last year. ‘We have a different viewpoint’, he said, addressing virtually the entire West.

Lethally, this odd relationship extends into the international sphere. Here, too, there is a connection between the blundering and the blindness of Western governments that act on the international stage but with little clear sense of purpose or direction, and a Russian regime that spies in the aftermath of these Western acts an opportunity for expanding, or at least consolidating, its regional power and global influence. Indeed, Russia is as open about this as it is about its juxtaposition of its traditional, straight, history-appreciating domestic way of life with the West’s domestic moral disarray. Where incoherent Western foreign policy turns countries into ‘black holes’, in the words of the Russian Foreign Ministry, Russia has seized the opportunity to present itself as a bringer of stability, as a counterweight to the hollow and destructive virtue-signalling that so many Western interventions now consist of.

It is difficult to overstate how much impact recent Western interventions have had on Russia’s sense of itself and of its regional and international ambitions. The NATO-led bombardment of Libya in particular had a transformative effect on Moscow’s view of its relationship with the world. The bloody incoherence of this intervention that was so loudly championed by Hillary Clinton in particular emboldened Putin and others in Russia to position themselves as forces for ‘stability’, for preserving the status quo rather than recklessly changing regimes. As the Russian international-affairs expert Ekaterina Stepanova argues, the ‘Libya effect’ played a ‘very direct role in shaping Russia’s subsequent policy on Syria’, where Moscow was able to justify its frequently destructive siding with the Assad regime as a necessary counterweight to the ‘chaos’ too often left behind by Clintonesque backing for regime change. Libya, says Stepanova, was viewed by Russian officials as an ‘epitome of the chaos and fragmentation’ that follows external intervention. Or as the Russian foreign minister Sergey Lavrov put it, interventions like that in Libya turn countries into a ‘black hole and a transit lane for terrorists, thugs, arms traffickers and illegal immigrants’.

Again, we see the unwittingly emboldening relationship between a West led by shallow, woke politicians like Hillary Clinton and Joe Biden and a Russian regime that has fashioned a new sense of domestic and global purpose precisely by contrasting itself with this ‘decayed’ West. This tragic symbiosis between Western incoherence and at least the illusion of Russian strength – it’s wrong to use the word strength, I know – has reached its nadir in Ukraine. The calamity that threatens to unfold there is best understood as a consequence of the corrosion of geopolitical norms; of the collapse of sense and seriousness in international affairs; of the unwitting signals that our disorientated elites now send to regimes like Russia through their behaviour on the global stage.

What we have witnessed over Ukraine is the worst of both worlds: Western leaders like Biden signal their political virtue, puff themselves up as the saviours of the Ukrainian people, while simultaneously letting it be known that they will not devote any serious political or military resources, far less manpower, to the project of protecting Ukraine from Russia. (‘Manpower’ – another unwoke word according to British security officials. Sorry.) As Fraser Myers argued on spiked this week, both Barack Obama and Biden have talked tough on Ukraine while also letting it be known that they won’t take much action. ‘The fact is that Ukraine, which is a non-NATO country, is going to be vulnerable to military domination by Russia no matter what we do’, said Obama in 2016. A ‘minor incursion’ by Putin into Ukraine would not be met by too much punishment, Biden infamously said last month. Western leaders perform virtue while winking their reluctance to engage in any kind of serious, coherent geopolitical activity.

In recent years, geopolitics has been utterly destabilised. It has been hollowed out. It has come to be driven less by interests or ideology, by the stuff of realpolitik, and more by a woke hunger to demonstrate one’s decency on a global stage. The evacuation of rational interests from geopolitics, and their replacement by the narcissistic need to say something about one’s own values, has indeed left ‘black holes’ everywhere from Iraq to Afghanistan, Syria to Libya. What’s more, as Biden’s calamitously executed withdrawal from Afghanistan made clear, the woke West is more than happy to abandon its allies when the going gets tough, even when an Islamist army threatens to punish those allies in the most severe way imaginable. Anyone who thinks that Putin hasn’t been paying attention to all of this – hasn’t been observing the West’s domestic confusions unleashed by wokeness and also the performative nature of Western foreign policy – is kidding themselves. This ruthless ruler sees in Western weakness a chance to increase his own strength – a word our woke officials won’t even say.

The Russian invasion of Ukraine is obscene. It is an intolerable infringement upon Ukrainian sovereignty and it threatens to cause destruction and death among the Ukrainian people. As an anti-imperialist publication, a publication that fully supports nations’ right to self-determination, spiked is implacably opposed to Russia’s actions. We also want to uncover the conditions and the ideas and the trends that have allowed such a potential calamity to unfold. Russia has invaded, and it must be opposed for having done so. But it has been emboldened by the domestic confusions and geopolitical infantilism of a West that has unwittingly played into Putin’s hands. If we are to defend peace and stability in the 21st century, we need to restore sense and diplomacy to geopolitics, and be honest about how the confused West’s own delusions and narcissism have impacted on global stability.